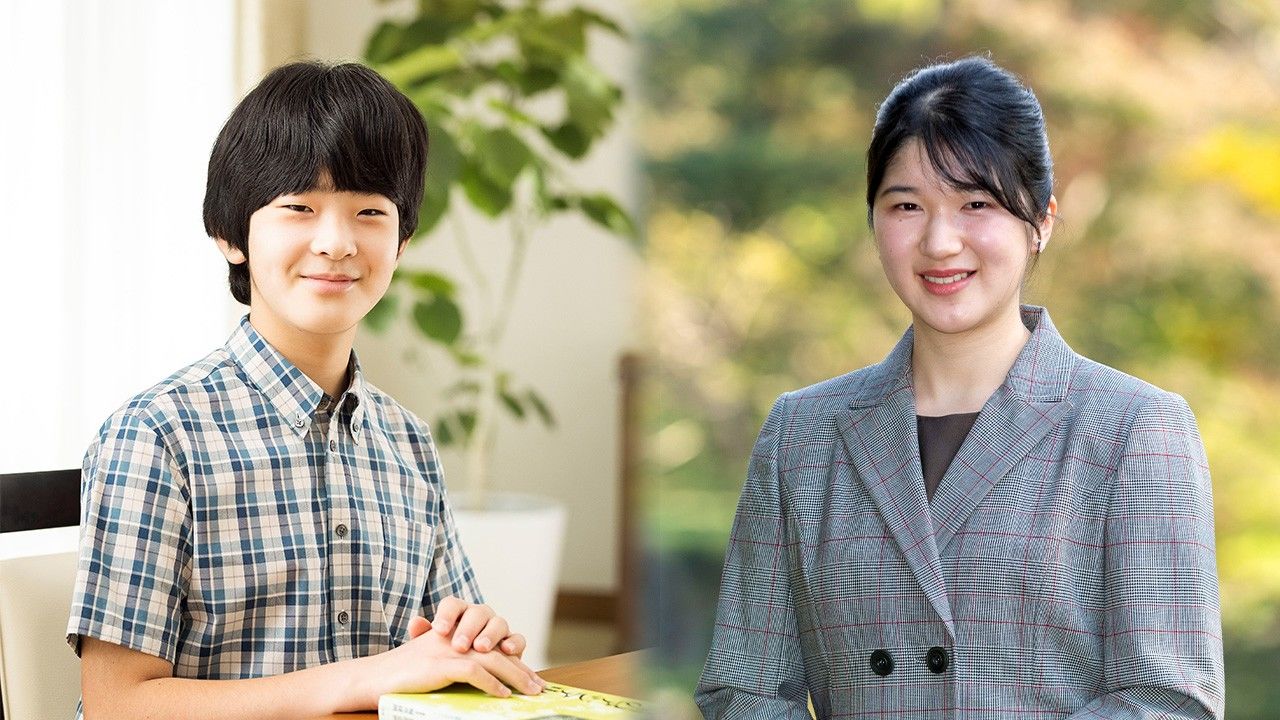 Society Imperial Family Mar 24, 2022
An expert panel established to discuss the imperial succession and related matters recommended allowing female members to retain imperial status after marriage to maintain the size of the family, but did not consider the possibility of Princess Aiko succeeding to the throne. Its conclusions were the complete opposite of a 2005 report published before the birth of Emperor Naruhito’s nephew, Prince Hisahito.

A Prince’s Birth Changes Everything

In January 2022, Prime Minister Kishida Fumio presented the Diet with a report from a government panel established to consider matters related to Japan’s imperial succession that offered two main potential approaches for maintaining the size of the family: allowing female members to retain their imperial status after marriage or restoring the imperial status of male descendants in former family branches.

It was the first such report under a Liberal Democratic Party government since 2005, when a panel submitted its report to the Koizumi Jun’ichirō administration. That was one year before the birth of Prince Hisahito—the nephew of Emperor Naruhito (then crown prince) and the only male imperial family member of his generation. As there were no young male family members at that time, the 2005 recommendations were the complete opposite of those in the most recent report.

The 2005 document concluded that “the stable maintenance of succession in the male line as has been practiced since ancient times will prove extremely difficult,” and so “it is essential to open the way to a female Emperor or an Emperor of female lineage,” and that “such a move would meet with the widespread approval of the Japanese public.” The report also stated that it would be appropriate “to adopt the principle of primogeniture, whereby precedence is given to the Emperor’s direct descendants, with the order of succession among siblings fathered by the Emperor being in order of age, regardless of sex.”

The 2005 report plainly came out in opposition to the idea of restoring the imperial status to those male descendants in branches that were removed in reforms after World War II. “These former Imperial Family members have already spent almost sixty years as ordinary citizens; furthermore, they are only distantly related to the present Emperor [Akihito], the common ancestry that they share with him going back some six hundred years to the Muromachi period. There is thus concern as to whether they would be widely accepted among the public as genuine members of the Imperial Family.” These conclusions seemed to have strengthened the case for Princess Aiko, the then three-year-old daughter of Crown Prince Naruhito, to one day ascend the imperial throne.

In the legislation passed in June 2017 that allowed Emperor Akihito to abdicate, a provision called on the government to consider the issue of stable succession and the possibility of allowing female members to remain in the imperial family after marriage. In March 2021, Prime Minister Suga Yoshihide created a panel of 21 experts that would meet 13 times, including holding five hearings. In December the panel chair, former Keiō University President Seike Atsushi, submitted its report to Prime Minister Kishida, who had since taken over as LDP president and leader of Japan. 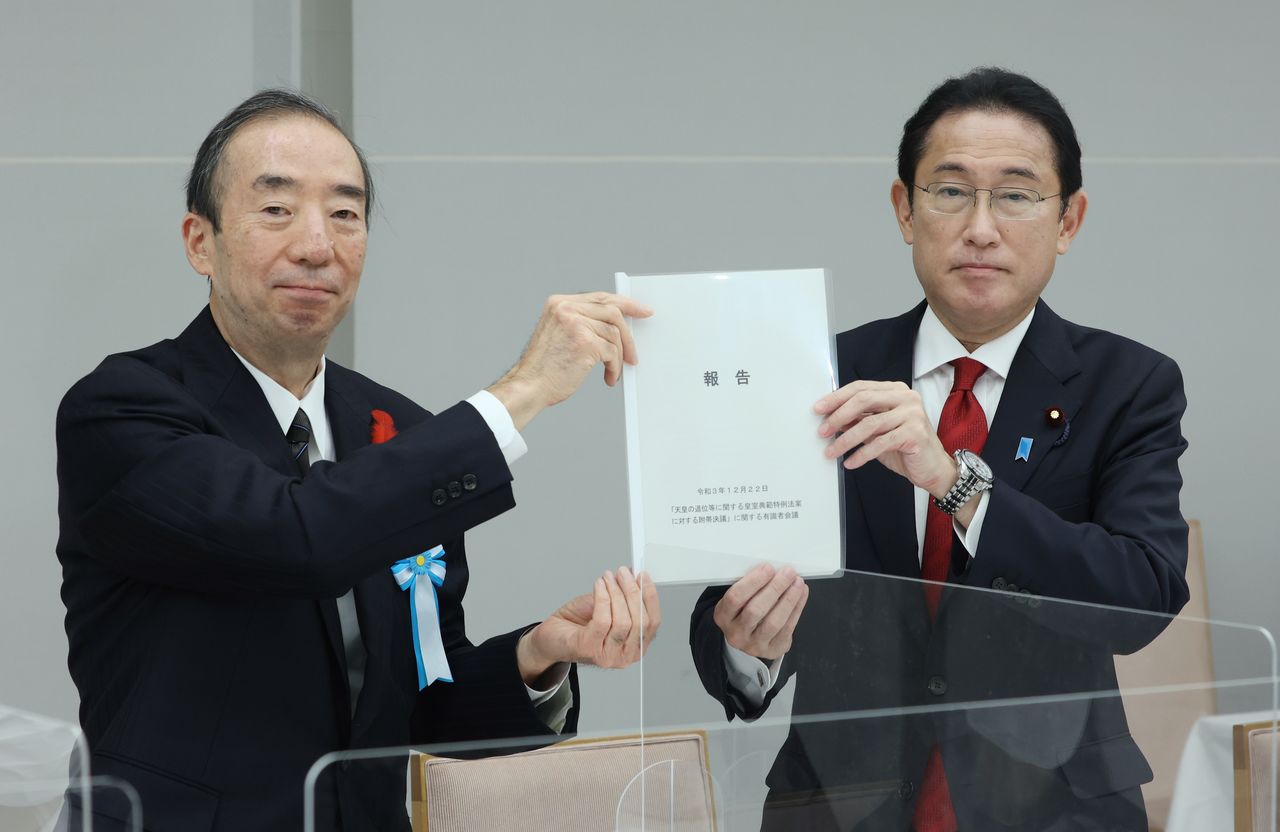 The 2021 report followed the Imperial House Law’s provision that succession should be “by a male offspring in the male line belonging to the Imperial Lineage,” and specified that Prince Hisahito will become emperor in the future. This came about due to near-unanimous agreement among the specialists at the hearing that the rules should not be changed until Prince Hisahito ascends to the throne, as it would be prudent to avoid major alterations while a successor of the next generation is already in place.

The report also stated that the time was not ripe for specific discussions of succession in the generation after Prince Hisahito, as it could have an unintended destabilizing effect. Instead, it continued, it would be better to go into the matter more deeply in the future, based on such factors as Hisahito’s age and marital status.

This could be read as a plan to wait and see whether Hisahito himself has a son, whereby the succession could continue under the present system—and to postpone further discussion until the emergence of problems relating to succession due to him not having a male heir, for instance.

The birth of Prince Hisahito is undoubtedly the reason why two expert panels under LDP governments came to opposite conclusions. But can one really say that resting all prospects for continuing the imperial family on just one of its members is an appropriate conclusion to a discussion on ensuring stable succession?

I feel that the panel and government passed up the opportunity to bear in mind the possibility of Princess Aiko succeeding as a “female emperor.” In public opinion polls over the past year or two, around 70% or 80% of respondents were in favor of a woman becoming emperor. The report sidestepped this point, which would throw into doubt the assumption of Prince Hisahito naturally succeeding.

In January 2006, Prime Minister Koizumi spoke in his policy speech of his intention to revise the Imperial House Law, which would have allowed for female emperors and matrilineal succession (whereby the child of a female emperor may succeed to the throne). However, in the following month, news emerged of Princess Kiko’s pregnancy. This heightened the opposition to an amendment within the LDP, and the Koizumi government postponed introducing the bill in the Diet. When Prince Hisahito was born in September, Koizumi decided to shelve the matter, and his premiership of over five years came to an end soon after.

His successor was Abe Shinzō, in his first stint as prime minister, who quickly criticized the panel and set aside its findings. Since then, the idea that imperial succession should be through the male line has been mainstream within the LDP.

In 2012, while the Democratic Party of Japan was in power, Prime Minister Noda Yoshihiko was spurred into action by a request from the Imperial Household Agency, which was concerned about the decreasing size of the imperial family, mainly due to the marriages of its female members. He held hearings with experts, who summarized the main points at issue.

Two proposals emerged: to have female members remain in the family after marriage, creating their own branches, or to have them continue to take part in imperial family activities even after having left the family. In this case, such changes would be limited to the naishinnō princesses, who are either daughters or granddaughters of the emperor. These proposals imagined that even if Prince Hisahito was the only male imperial family member of his generation, he could be supported by his sisters.

The summary stated that if female members formed their own branches, further consideration was necessary on whether to give their husbands and children imperial status. Conservatives opposed children gaining imperial status, as this would create family members in the maternal line with the right to succeed to the throne. They warned of the collapse of Japan’s traditional system of patrilineal male succession.

Prime Minister Noda left office through electoral defeat before he could bring an Imperial House Law amendment to fruition. At this point, Prime Minister Abe began his lengthy second period in office, and no further action was taken on having princesses create their own branches. However, the abdication of Emperor Akihito led ultimately—after Abe stepped down—to the establishment of a new panel, reopening the debate on the future of the imperial family.

Meanwhile, there was considerable media uproar over the engagement of Prince Hisahito’s eldest sister Princess Mako to Komuro Kei. Around the time the main issues related to the marriage were ironed out in the autumn of 2021, there was an unspoken understanding that the panel would not suggest applying any new system to the Komuro couple in its report.

In the second half of the 2021 report, there were proposals as to what to do to ensure that there would continue to be imperial family members other than Hisahito. The first of these was to allow female members to remain part of the family after marriage.

Anticipating conservative objections to imperial family members in the maternal line, the report stated that while the princesses would stay in the family, their husbands and children would have the rights and duties of ordinary citizens. With Princess Mako’s marriage a recent memory, the document denied the possibility of husbands and children joining the imperial family. 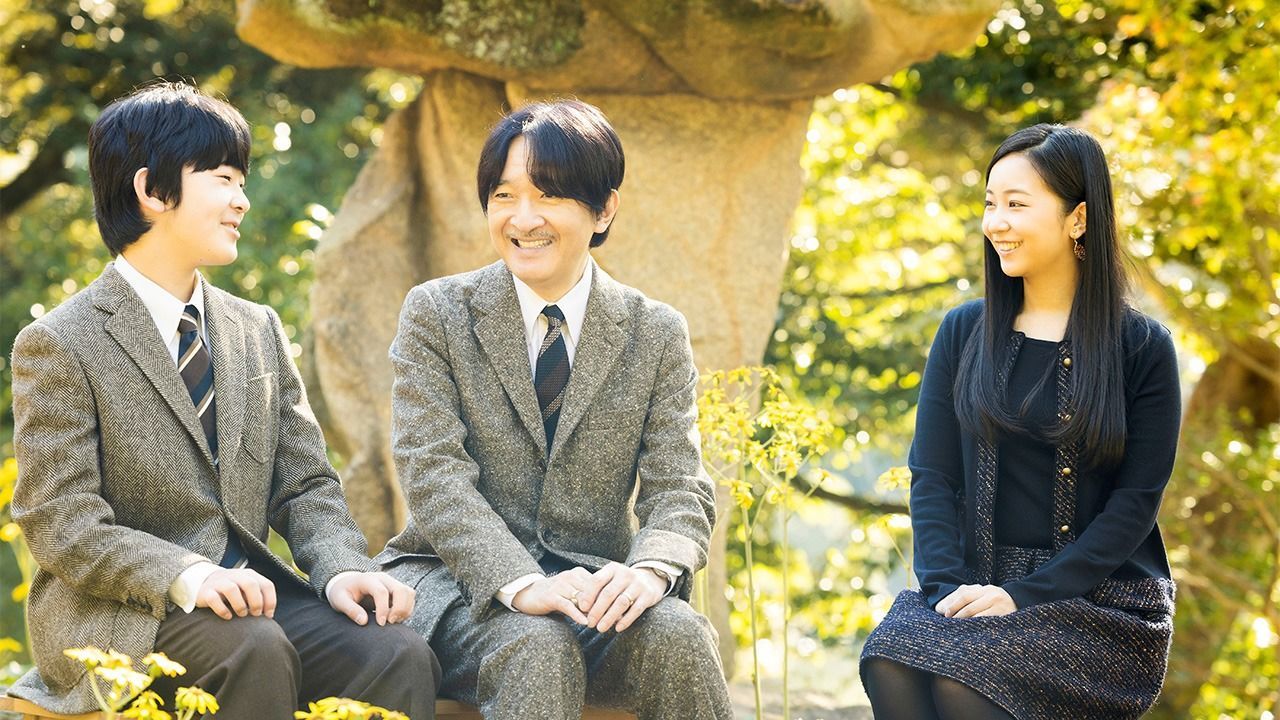 Based on this proposal, Princess Aiko would remain in the imperial family if she married, while her family would be ordinary citizens. This was not seen as ideal by all of the panel experts. A professor questioned whether this mixed household could really be called a normal family. Another described the establishment by princesses of branches that were not in the line of succession as a problematic half-measure, stating that a radical solution was required to ensure the stability of succession. An emeritus professor commented that there was a need for Princess Aiko to remain in the family to support Prince Hisahito in his official duties when he became emperor, and that it was only natural for her husband and children to also receive imperial status, but that to stipulate that they were not in the line of succession would prevent succession through the maternal line.

As Princess Aiko became an adult when she turned 20 in December, she is now closer to any potential marriage. The panel’s report is likely to have a great influence on her future life, so a timely start to discussions in the Diet would be welcome.

A second article will discuss the proposal to restore the imperial status of male descendants in former branches of the family.