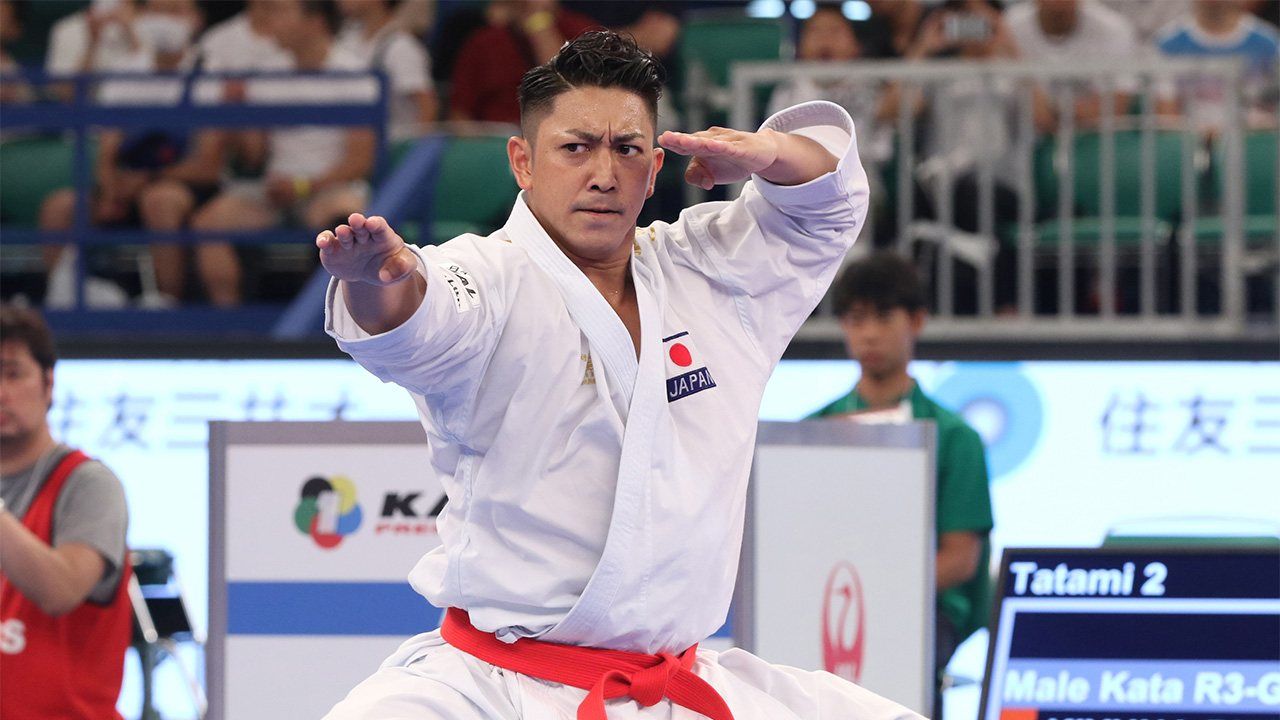 Kiyuna Ryō: A Champion Born and Raised in Okinawa, the Land of Karate

Tokyo 2020 Sports Jun 1, 2020
With the postponement of the Tokyo Olympics, sports associations in Japan are struggling to decide on selection procedures for the delayed competitions. In men’s karate, though, there is no question that Japan’s most likely gold medalist is Kiyuna Ryō. Born and raised in Okinawa, where karate originated, Kiyuna finds special meaning in participating in the Olympics.

The Land of Karate Gives Birth to a Super Athlete

Karate originated as a martial art in fourteenth-century Okinawa. In the upcoming Olympics, karate will be included for the first time, with two divisions of competition: one for kata (forms) and one for kumite (sparring), with an equal number of matches for men and women in each division. Kiyuna Ryō, 29, is a master of the former, the solo demonstration of karate self-defense moves judged by degree of precision, powerfulness, speed, rhythm, and balance. He is expected to dominate the men’s kata division.

Kiyuna has won three consecutive biennial Karate World Championships in the kata division, in 2014, 2016, and 2018. He has remained undefeated in the Olympic trials that started in July 2018 and has won all of the 12 international tournaments in which he participated. For eight years straight, from 2012 to 2019, he has dominated the All Japan Karate Championship, setting the record for the longest winning run in the history of the competition. It is anticipated that he will continue to break records.

He is an uncontested champion in international tournaments. The kata division has seven judges who evaluate each competitor’s demonstration in 0.2-point increments on a scale of 10. In every match, Kiyuna has defeated his competitor by a large margin of more than 1.0 points. He seems to only grow stronger with every competition. In the January 2020 international finals, one judge gave him an unprecedented 10-point score.

Kiyuna’s superhuman feats have won him a large following of karate fans. He stands out among the Japanese contenders for the Olympic Games for his record and the undisputed quality of his wins and is considered to be a strong contender for Olympic gold in the karate kata division.

Powerful as he seems today, Kiyuna has attained his current level only through hard work.

He was five years old when a kindergarten friend inspired him to try karate. In ninth grade, Kiyuna joined the Sakumoto Karate Academy operated by Sakumoto Tsuguo, head of the Ryūeiryū school of karate and a master who has coached many world champions. In high school, Kiyuna never got beyond the third match in the Inter-High School Championships, but he finally came into his own in his junior year of college, when he won the Intercollegiate Championship. The following year, in 2012, he participated for the first time in the Karate World Championship in Paris as a member of the Japanese national team. 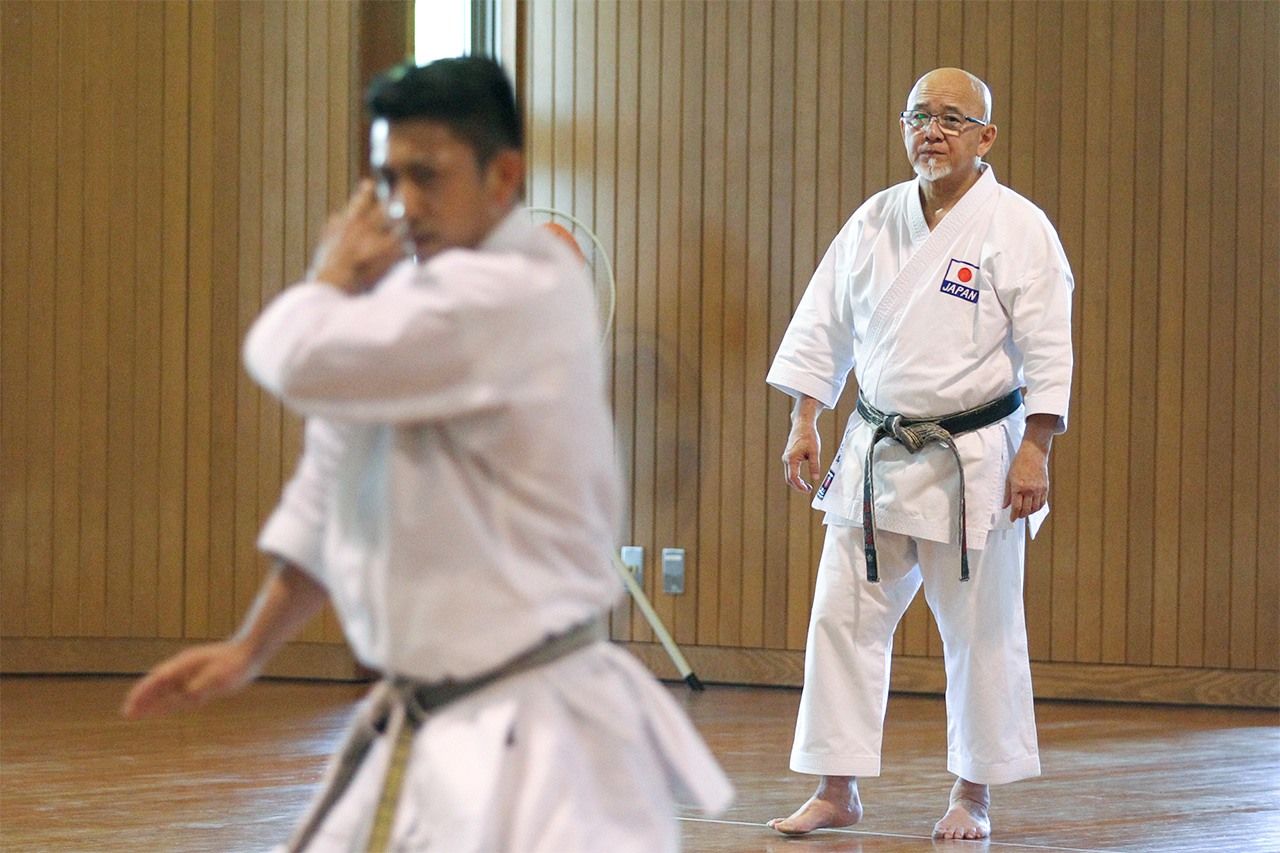 Kiyuna’s rise hit a snag at this tournament when he found himself pitted against the world champion at the time, Antonio Diaz of Venezuela. Diaz had trained in Japan and was known for his technical skill. Kiyuna lost to Diaz, dropping to third place. In tournaments thereafter, he never got beyond second or third place.

So close, yet unable to reach the top, Kiyuna was frustrated and impatient. To make matters worse, he ended up in third place again at the 2013 Asian Karate Championships held in the UAE, a tournament everyone was sure he would win.

It was a dejected Kiyuna who returned to Japan. He won the All Japan Karate Championship that was held immediately thereafter, but his champion interview before the 100,000 spectators was marred by his own bitter tears. He felt painfully that he had failed his country and failed his mission to convey the splendor of an ancient martial art originating in his birthplace of Okinawa.

Determined to develop the overwhelming strength he needed to become a truly powerful master of kata karate, Kiyuna launched himself in 2014 on a grueling regimen of expanded weight training to add muscle and constant practice to polish the basic forms of karate kata, the tsuki thrusting techniques and keri kicks. He used the traditional Okinawan straw-padded posts known as makiwara to practice his strikes and kicks so as to master the physical sensations of those techniques.

Kiyuna’s fastidious dedication brought him success in building up his physical prowess and let him refine his techniques to such an extent that he was able to go on and win his first world championship that same year, in 2014.

Kiyuna says he was not happy with his win at the 2014 All Japan Karate Championship, though. “I felt people were seeing me as the top contender and yet I wasn’t performing up to their expectations.”

Sakumoto scolded Kiyuna at practice. “You need to take another look at your whole lifestyle,” he admonished Kiyuna, in a warning that his performance was still rough around the edges. He needed to sharpen his awareness, be more attentive to detail.

The smallest feeling of pride at being a champion is all that is needed to bring a person down. Kata are extremely delicate moves. The slightest drop in concentration or the minutest failure of aspiration will cause major disruption. Sakumoto, who had won three consecutive championships in his heyday, knew this better than anyone—hence his demanding attitude toward Kiyuna.

Kiyuna may never have achieved his own succession of wins without Sakumoto’s strict coaching. He went on to score his own triple crown with consecutive wins at the 2014, 2016, and 2018 Karate World Championships. He had finally secured his place as a world-class champion. 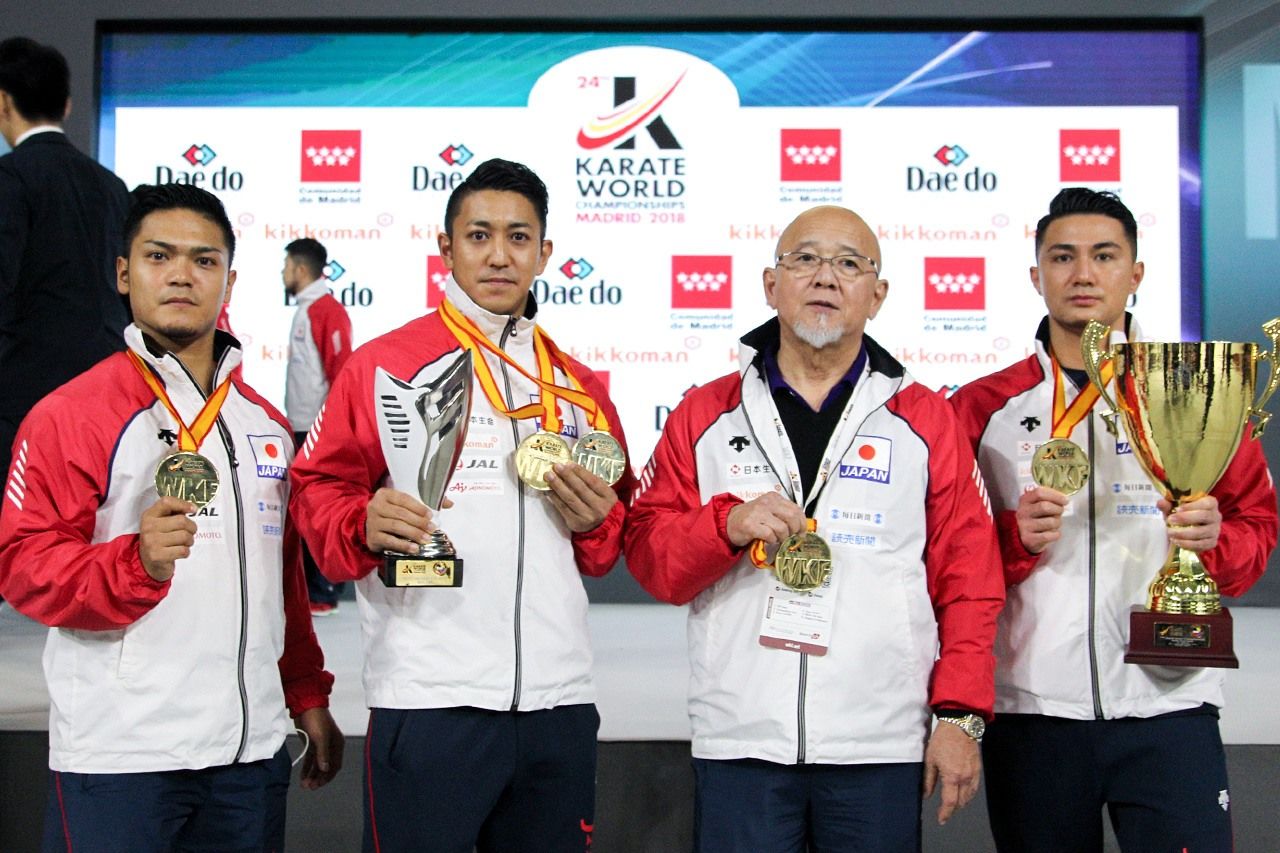 While securing his own successive wins of 2014, 2016, and 2018, Kiyuna also contributed to consecutive wins in team kata at the 2016 and 2018 World Championships. He is shown here with teammates Kinjō Arata (far right) and Uemura Takuya (far left). His teammates and coach Sakumoto, second from right, played a significant role in helping Kiyuna achieve his full potential.

Delving Deep into a 700-Year History

Every day of the year is devoted to practice, practice, practice. Starting before noon and continuing late into the afternoon, Kiyuna practices his kata under Sakumoto’s watchful eye. His evenings are set aside for more practice on his own or a regimen of weightlifting. Not one day goes by that he is not doing something to enhance the depth of his kata.

Kata comprise a series of tsuki and keri defensive motions against an imaginary opponent. The demonstration must be realistic enough that the judges can actually “see” the opponent and recognize when the opponent is defeated. To achieve this degree of realism, the performer must fully understand the significance of each form and perform it with power and conviction. Each thrust, each kick, must be strong enough and accurate enough to actually disable a real opponent. This is what Kiyuna means when he talks about “realistic” kata.

On the advice of Sakumoto, Kiyuna is currently undergoing a unique sort of cross-training, receiving instruction in the traditional arts of Ryūkyū dance and the sanshin (a banjo-like Okinawan instrument). The intent is to further refine his sensibilities by mastering the distinctive fluid motions of Okinawan dance, the subtle, concise tempo, and the sharp, targeted stare. These are all elements that enhance his kata performance as his development continues.

Kiyuna says he has one more objective beside perfecting his kata, and that is to “create history.” Asked to explain, he replies that he wants to be the first Okinawan to win an Olympic gold medal. 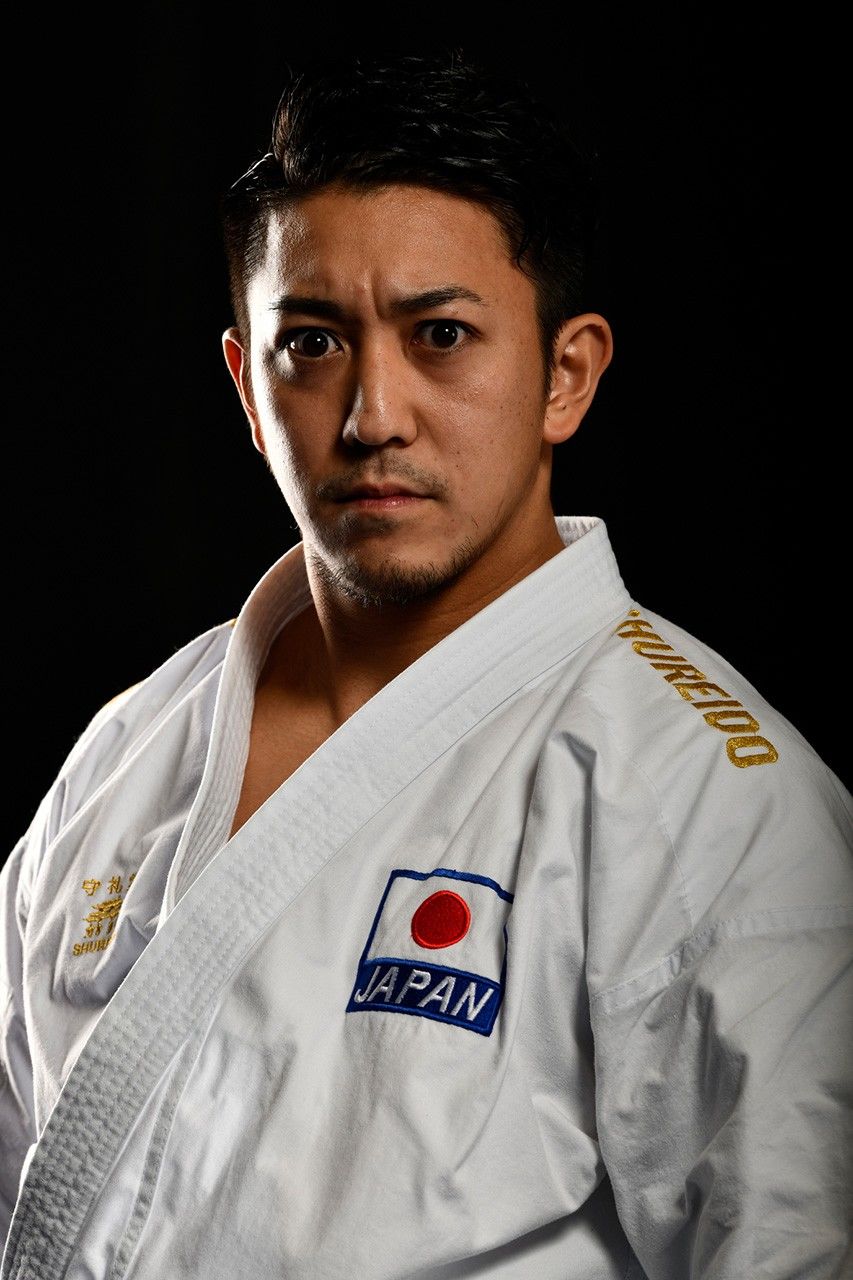 Kiyuna demonstrates the stare he is polishing with his dance training.

The more he learns about karate, says Kiyuna, the deeper his love grows for Okinawa. He takes great pride in mastering a historical element of Okinawan culture. As a participant in the first Olympic karate competition, Kiyuna will be representing not only his country, Japan, but also Okinawa, land of his birth and the place where karate originated.

“I want to convey the wonderful culture of Japan and of Okinawa through my performance,” he says.

Kiyuna will be crystallizing 700 years of karate history on the world’s greatest stage. He will certainly be adding a new page to karate history.