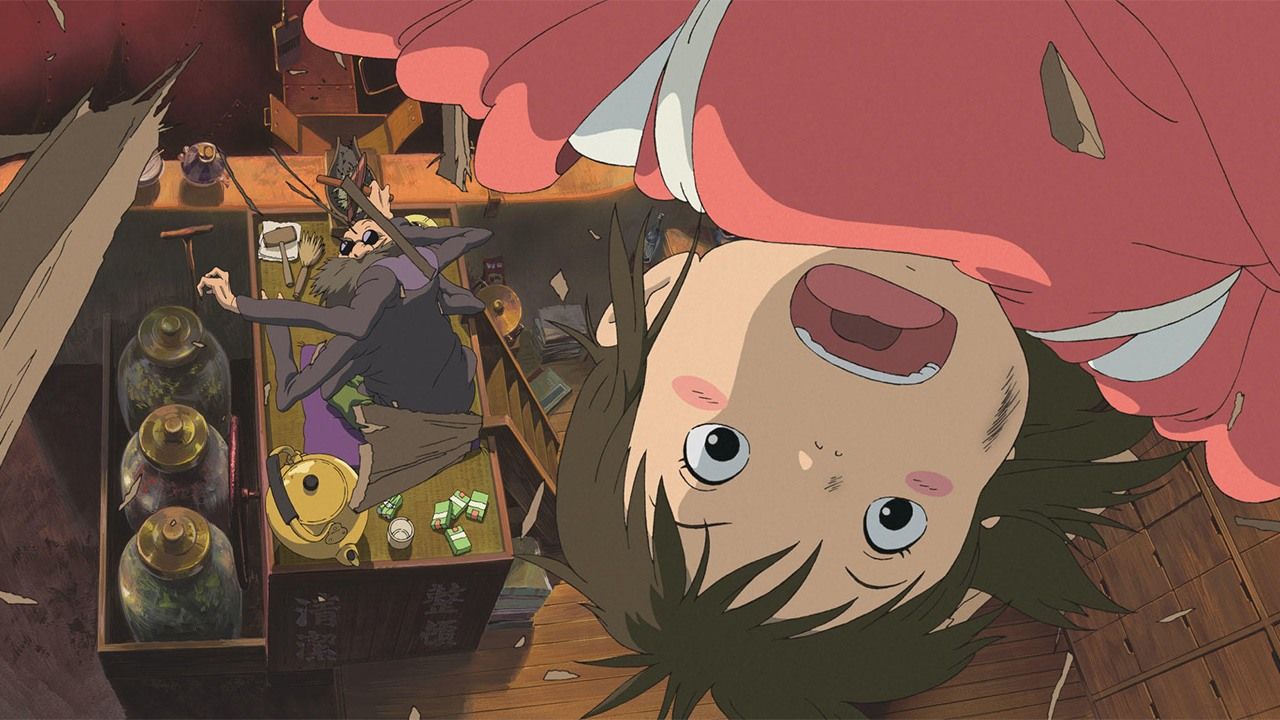 The Bathhouse of the Gods: “Spirited Away” and Japan’s Religious Traditions

Cinema Jul 19, 2021
Miyazaki Hayao’s classic anime Spirited Away draws on Japan’s religious traditions in its depiction of the bathhouse world its central character Chihiro finds herself in. Theologian Masaki Akira offers his insights into interpreting the film.

The Power of Words

It has been 20 years since the film Spirited Away was released in Japan in July 2001. It soon became the country’s highest-grossing film ever, and was only toppled from this position last year by Demon Slayer the Movie: Mugen Train. Director Miyazaki Hayao’s film has also received critical plaudits around the world and won the Academy Award for Best Animated Feature.

The original Japanese name for the film is Sen to Chihiro no kamikakushi, which might be translated literally as “The Spiriting Away of Sen and Chihiro.” But why this title?

Chihiro is the name of the main character, a 10-year-old girl. Miyazaki said that girls of that age are tough these days, which is why he chose one as the heroine. She is the daughter of middle-class parents, as is apparent from the four-wheel-drive Audi they own, the upscale brand of the supermarket bag inside, and the relatively young age at which they have been able to buy a detached house in the suburbs. The couple and their daughter Chihiro are selfish, ill-mannered, and devoted to their desires. They are typical of the Japanese people of the time, who ignored the country’s traditional, spiritual culture to sing the praises of economic prosperity. 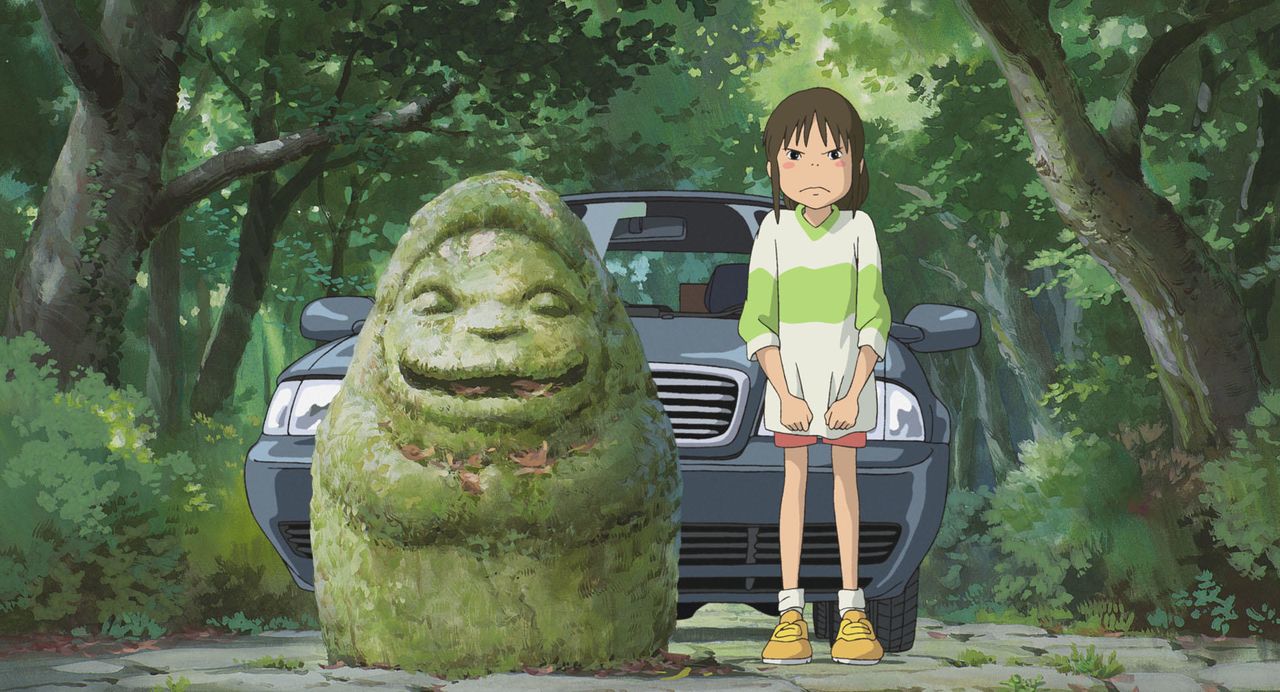 Chihiro, the 10-year-old central character in Spirited Away. (© 2001 Studio Ghibli/NDDTM)

Chihiro (千尋) becomes Sen (千) when Yubaba, who runs the bathhouse in the story, takes one character of her name and gains control over the girl. 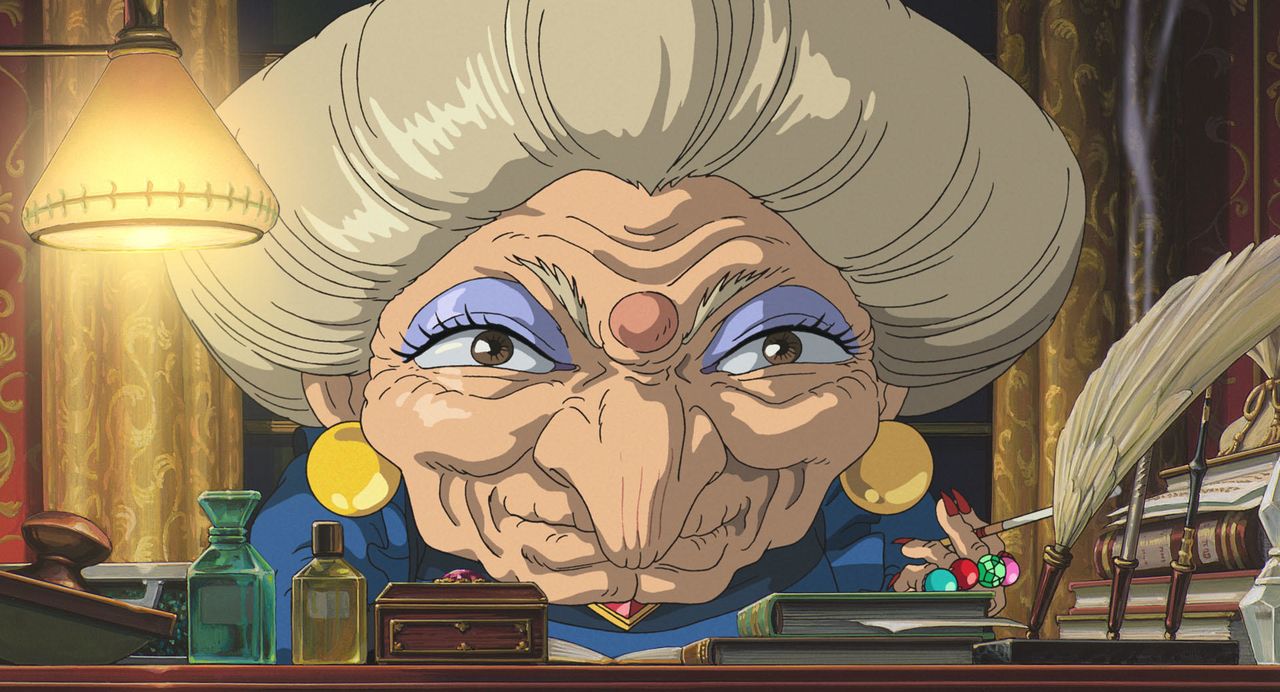 The witch Yubaba controls people through their names. (© 2001 Studio Ghibli/NDDTM)

In Japanese tradition, words are thought to have a spiritual power, which is called kotodama. According to this belief, when certain words are spoken, their hidden power can affect the real world in a variety of ways. The idea of kotodama could still be said to feed into the creative background for Japanese poetry.

A kamikakushi refers to the sudden vanishing of somebody for no reason. It was apparently due to the absence of a known reason that such events were attributed to the kami (gods). Or it might be that identifying the kami as the perpetrators was a way of finding acceptance.

Parents feared kamikakushi as it was often children who went missing. In the Japan of the past, at times when human trafficking was relatively common, kidnapping was a very real possibility. Frightening memories of these kinds of incident lingered into much later periods.

In theological terms, Chihiro’s experience is of a voyage to another world, and then a return to our own. There are many stories of journeys to heaven or hell and back in human history. This is the classic form for such a voyage. 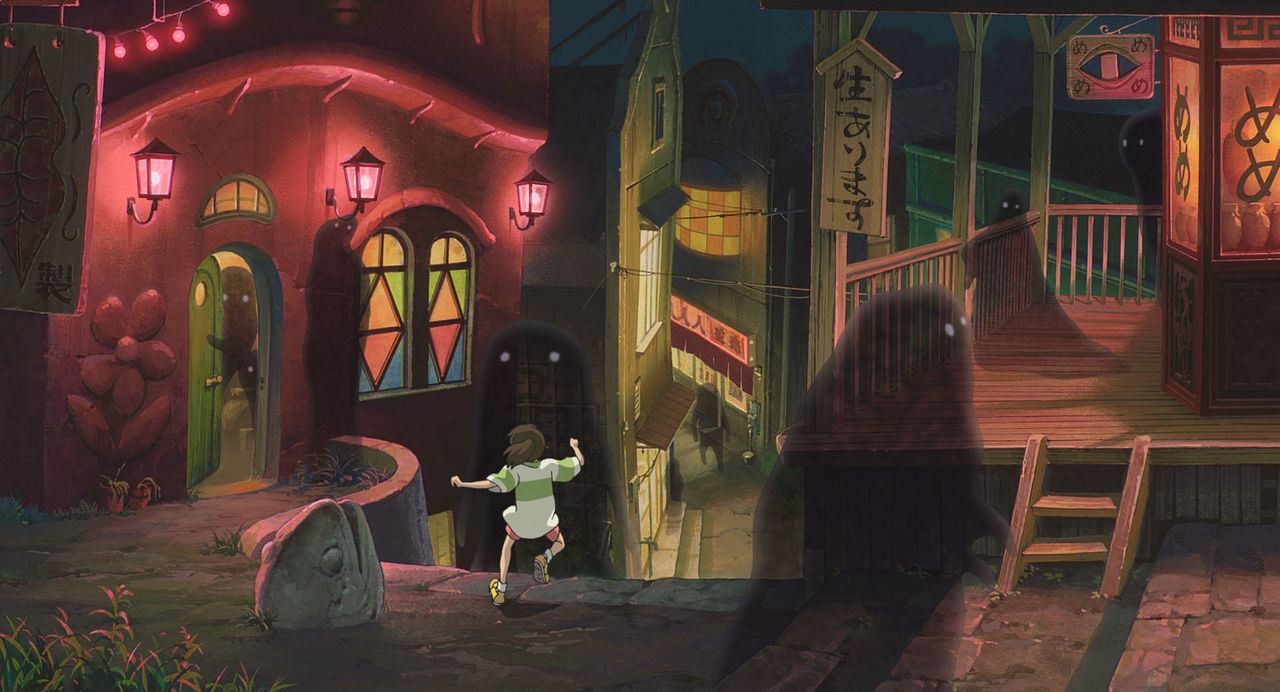 At the start of Spirited Away, Chihiro’s father gets lost and takes the wrong road. This pattern of traveling along a mistaken path as a route to entering an entirely different world is very similar to Dante’s Divine Comedy. While Chihiro’s voyage is not on the same scale, it does an excellent job of presenting Japan’s unique spiritual world.

Thunder and Lightning of the Gods

The lost family first encounters an old Japanese cedar (sugi) stretching upward with a torii gate built in front of it, and stone hokora, “houses for the guardian spirits,” piled up beneath it. All these are connected with Shintō.

A close look at the old cedar shows that it is broken at the top. These kinds of old trees are often found at shrines in Japan, such as Kamigamo Shrine in Kyoto and Kasuga Taisha in Nara. They are revered, due to being seen as locations where kami descended from the heavens in the form of lightning. This divine connection makes these trees sacred.

In the Old Testament, when Moses brings the Ten Commandments down from Mount Sinai, there is thunder and lightning. In Hinduism, Indra derives originally from a thunder god. However, in many religions, the gods’ origins in thunder and lightning have been forgotten, as they have become detached from natural phenomena to become omnipotent deities transcending human understanding.

In Japan, however, the gods have long maintained their connection with the natural world. The fact that kami are counted using the word hashira (pillar) conveys an association of being rooted to the ground. In the Onbashira Festival at the Suwa Shrine complex in Nagano Prefecture, which is said to be one of Japan’s oldest such sites, sixteen huge pillars are dragged to and raised at the corners of the four shrines.

This is one example showing that trees have been revered for their divine nature. When Buddhism spread to Japan from continental Asia, the first statues of the Buddha were made from camphor trees, which were considered the most sacred of trees. The term shinboku is used for trees venerated as divine. In Miyazaki’s My Neighbor Totoro, the titular creature lives in a camphor tree, and may possibly be its spirit.

Japan is said to have myriad gods, or literally 8 million, and so Shintō is entirely different from monotheistic religions. In Spirited Away, there are gods everywhere. 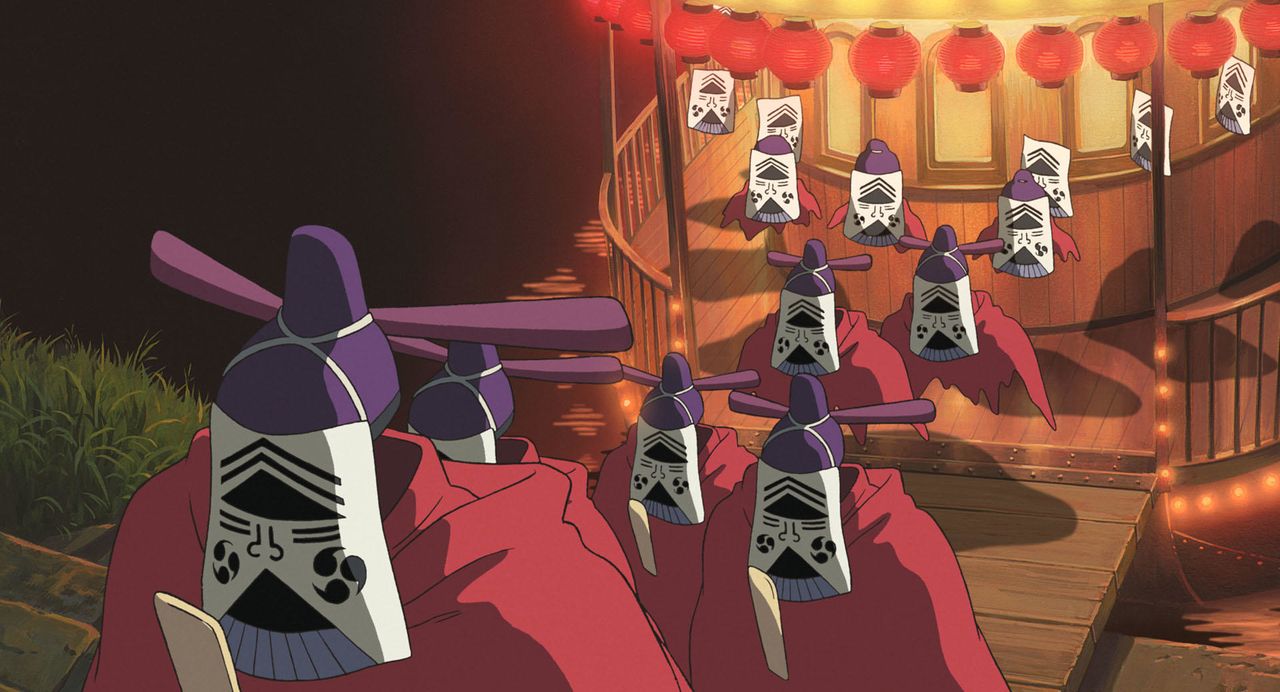 It is worth noting that generally these kami are not at all of high status. While one polluted river spirit cleansed by Chihiro is apparently quite important, others are quite ordinary, despite being gods, and most travel in groups.

This attitude to kami could also be said to be Japanese tradition. It is true that some are powerful, like the sun goddess Amaterasu, who is said to be the ancestor of Japan’s emperors. Most kami, however, are familiar, approachable beings like Totoro, and there are loose boundaries between their world and the one where humans live.

The belief that everything in existence is alive and has a spirit is known as animism, from the Latin anima, meaning “life” or “soul”—incidentally, animation derives from the same word. That “everything” includes such features as rocks, mountains, and rivers, which are not generally thought of as being alive.

There is a tendency to view animism as a primitive belief system. However, in Japan, it can be found incorporated into highly sophisticated Buddhist thinking.

In one well-known example, the Buddhist monk Kūkai (774–835) stated: “Composed of the five elements of earth, water, fire, wind, and space, all things in creation contain echoes of the truth. . . . Dainichi Nyorai, the supreme Buddha, is the image of the world as it is.”

Singer Matsutōya Yumi expressed the same idea in simpler terms in her song “Yasashisa ni tsutsumareta nara” (Embraced by Tenderness): “If I open the curtain, and I’m embraced by the tenderness of the calm sunbeams through the trees, everything I see is surely a message.”

The Zen master Dōgen (1200–53) said that “even tiles and stones can achieve enlightenment to become a Buddha.” Thus, Japan’s great spiritual minds created a unique advanced synthesis of animism and Buddhism.

In India, where Buddhism originated, it was thought that only animals were able to advance to the stage of becoming a Buddha. Other aspects of nature, lacking spirits, could not achieve that enlightenment. In Japan, however, it was believed that they did have spirits, and therefore could become a Buddha. This would never have been possible without the animistic view of nature among Japanese people.

In Tibetan Buddhism, a faithful descendant of the Indian original, there has also been the idea that only animals can move along the path to enlightenment. In recent years though, the Dalai Lama has shown a great understanding of the concepts of Japanese Buddhism, and now tends toward the idea that all of nature can become Buddha.

Considering the environmental problems of the twenty-first century, it must be apparent that considering nature on the same level as humans will be greatly useful for tackling these problems.

Here I will touch on some other important aspects of the film.

After going from the real world to the bathhouse, Chihiro travels to a world where she makes a train journey over the water, before returning to the bathhouse and back home. In the train sequence, the scenery has a desolate air and the people who get on and off are shadow figures wearing old-fashioned clothes. 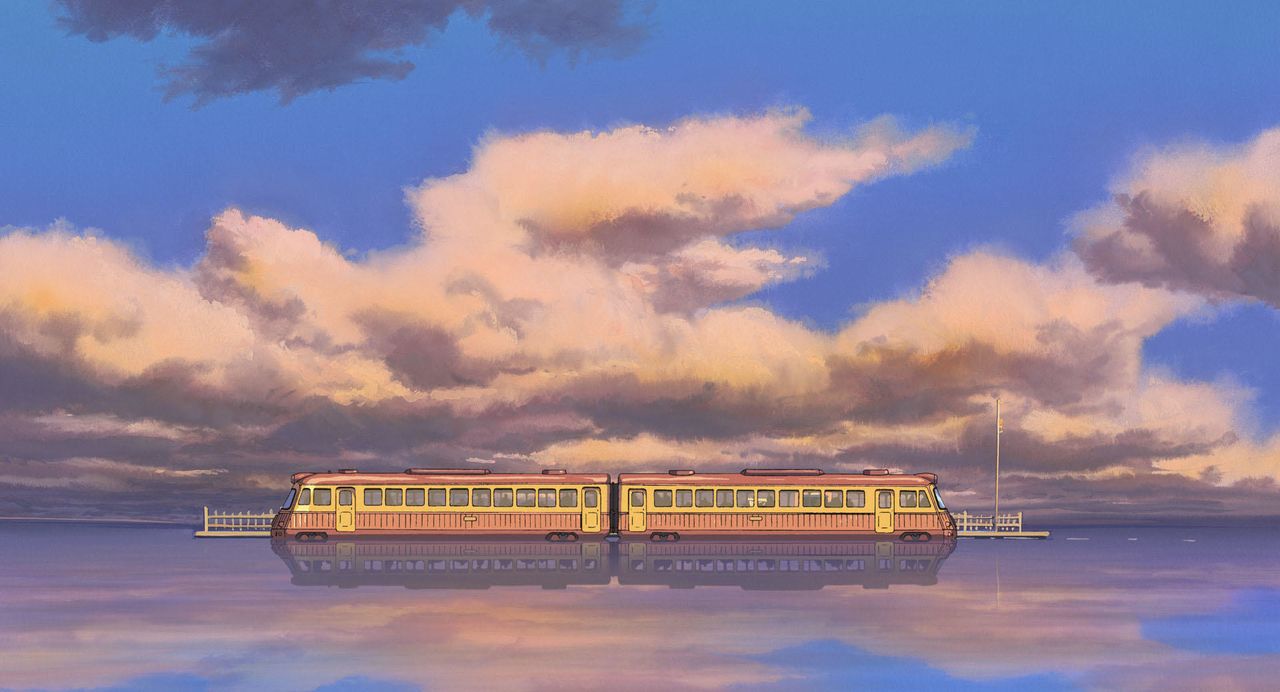 These aspects mean this third realm conveys an image of the past or the afterlife. The voyage from the world of the living to that of the dead and back again has a strong connection to profound religious experiences. It may be that the journey also contributes to Chihiro’s spiritual growth, so that this is not only the result of her physical labor in the bathhouse.

Around three days and two nights pass for Chihiro from when her father takes the wrong road until she comes back to our world, but for her parents, it is an extremely short time. They do not even remember eating the gods’ food without permission and being transformed into pigs.

However, when they leave the tunnel, the wall has changed to look completely different from when they went in, overgrown with vegetation, while their car is covered in dust and leaves. Some considerable time may have passed, and if so, one worries whether Chihiro and her family have really returned to where they came from.

In the bathhouse garden, flowers from all year round bloom at the same time. All the seasons take place simultaneously, symbolizing that this is not the real world. Miyazaki did not invent this idea himself. In Pure Land Buddhism, those who show faith in Amida Buddha are reborn in the Pure Land, an eternal paradise, after their death. From the Heian period (794–1185), the technique seen in the film has been used to depict the Pure Land. Throughout his works, Miyazaki takes inspiration from traditional Japanese culture and adapts it for his artistic visions. 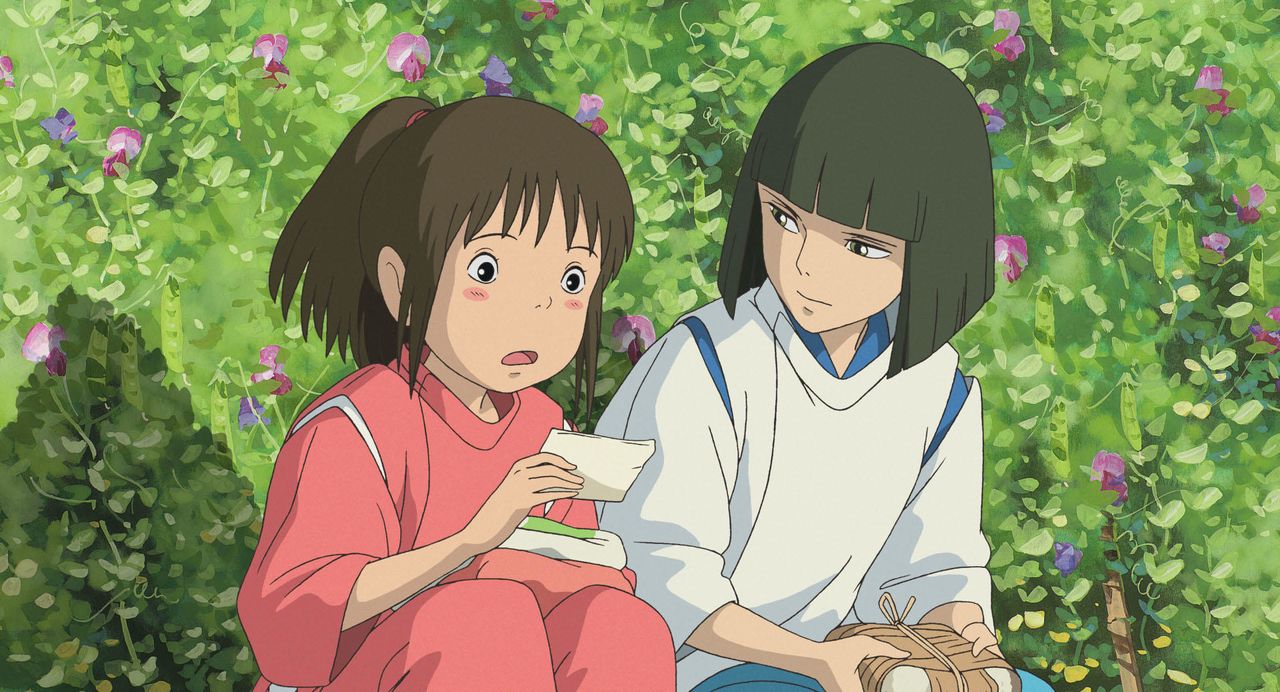 Chihiro with Haku in the bathhouse garden. (© 2001 Studio Ghibli/NDDTM)

The character No-Face (Kaonashi) has no voice of his own, instead, using the voices of those he swallows. The lower half of his body is also semitransparent. These aspects may symbolize that he has no real self.

In the second half of the film, No-Face scatters counterfeit gold that emerges from his hands, eats gluttonously, and acts without restraint. Then he transforms into a disproportioned and uncanny creature, like a spider or tick, with a tiny head on a giant body. 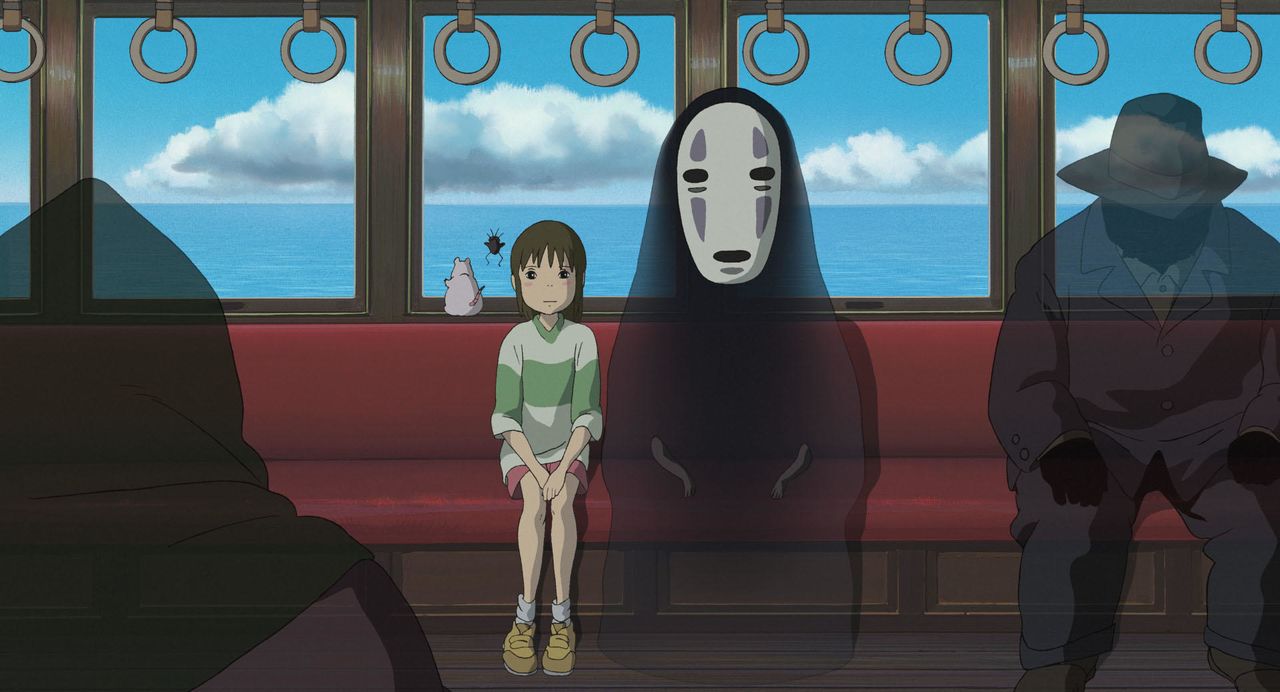 Chihiro sits next to the mysterious character No-Face. (© 2001 Studio Ghibli/NDDTM)

This large/small combination seems to symbolize overflowing desire and the weak spirit unable to control it. Although he swallows other characters, he regurgitates them just as they are, which may show that knowledge and experience cannot truly be made one’s own. It could be that No-Face represents us all.