Following the Way of the Gods: Shintō Priest Florian Wiltschko

Culture Nov 21, 2016
Austrian-born Florian Wiltschko is a Shintō priest who has been interested in Japan from a young age. He notes that there is great wisdom in the Shintō approach to life that can help us return to a state of divine innocence. 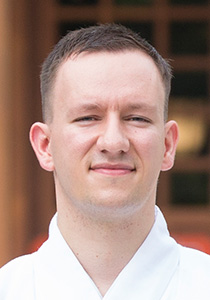 Born in 1987 in Linz, Austria. Was curious about Japan from an early age; his interest grew following his first sightseeing trip to the country with his parents when he was 14. Majored in Japanese studies at the University of Vienna after military service. In 2007 was introduced to the shrine Ueno Tenmangū in Nagoya, where he lived while studying Shintō. Returned to Vienna to finish his degree, after which he enrolled in the Faculty of Shintō Studies at Kokugakuin University in Japan. Following graduation, worked as a gonnegi (assistant priest) at the Konnō Hachimangū in Shibuya for four years before marrying and taking the position of a negi (priest) at Nobeno Shrine in Tsu, Mie Prefecture, in May 2016.

A Repository of the World’s Cultures

INTERVIEWER   You’ve been interested in Japan since you were a child. What did you find so appealing?

FLORIAN WILTSCHKO   Initially I was attracted by the country’s distinct landscapes, buildings, and traditional costumes. When I started researching these I was fascinated to discover the unique story and history behind each one. Japan, I feel, is a remarkably rich repository of the best things from various Asian cultures. In a way it’s like the 1,300-year-old Shōsōin treasure house in Nara Prefecture that contains thousands of valuable artifacts from along the Silk Road, each kept in immaculate condition.

The Japanese people, I’m sure, have long regarded the cultures that reached their shores with great curiosity. Even today, they have great interest in learning about new things, embracing and incorporating these in ways that best fit the local culture. This is evident even in something as simple as beef curry and rice. Curry is originally an Indian dish, but it would be unthinkable for beef to be served with it in India. In Japan, though, these ingredients come together naturally, and the result is quite delicious!

Incorporating new elements and tastefully arranging these into novel creations is also at the heart of Shintō. Just look at the design of shrines. Few of the architectural details are of native origin—the concepts of having a main hall and an object of worship have been imported from Buddhist and esoteric practices. The same goes for the komainu guardian figures at the entrance to a shrine. In each case, though, these elements weren’t simply copied; they were rearranged into new and distinctively Japanese configurations. 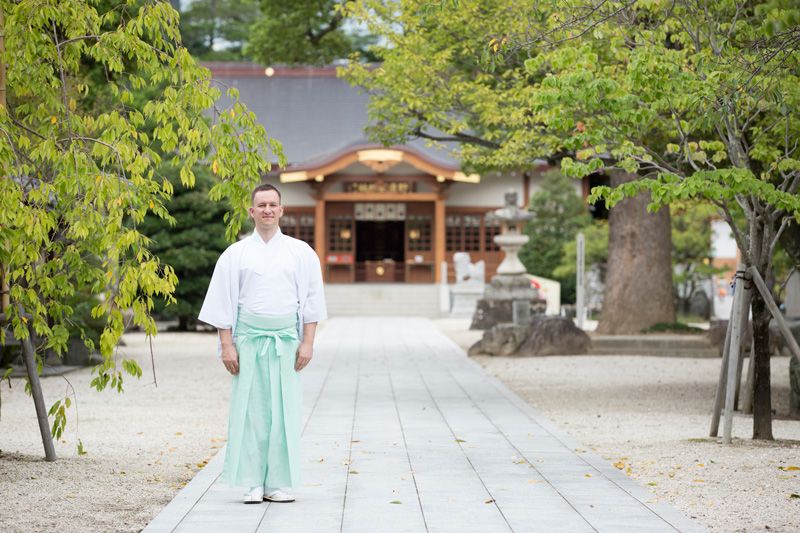 On the grounds of Nobeno Shrine.

Shintō Is Not a Religion

INTERVIEWER   What aspects of Shintō have you found most intriguing?

WILTSCHKO   I’m fascinated by the widely varying design of shrines. When you go to Nagano, for example, you’ll find that many shrines, including the ancient Suwa Taisha, have four large pillars surrounding the main building. In Nara, there’s prominent use of vermillion coloring, while in neighboring Mie, the buildings are largely unpainted—Ise Shrine being a good example.

This inconsistency in religious architecture might strike some people as being very odd. The best explanation for it, I think, is that Shintō is not a religion in the Western sense of the word. In fact, “religion” is a fairly recent concept in Japan, as suggested by the fact that shūkyō, the Japanese equivalent of “religion,” didn’t exist in the lexicon until the Meiji period. Religion connotes a membership in some group, and I think that in Europe, where I am from, people’s status and ethnicity were historically defined through their affiliation with a particular church or denomination.

Qualifications and rules are naturally part of membership in any group, but there’s nothing of the sort in Shintō. The torii gates at the entrance of a shrine don’t close, so they’re not meant to keep anyone out—not even people of differing faiths. The decision by political leaders in ancient Nara to import Buddhism supports the idea that “religion” was not a native concept in Japan. Usually, new religions either replace an older system of belief or are rejected and kept out. The syncretic convergence of the old and new—Shintō and Buddhism—that resulted is hard to imagine in another culture. 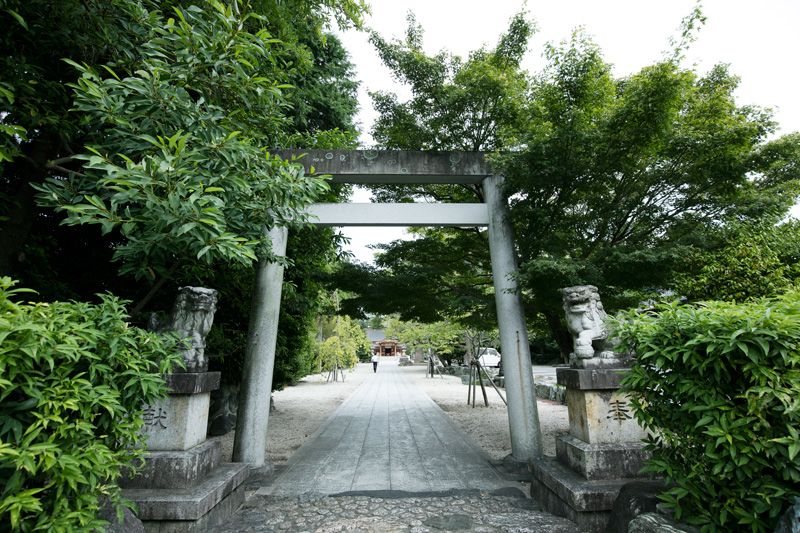 The torii gate and komainu guardian figures at the southern entrance to Nobeno Shrine.

INTERVIEWER   It’s often said that because Japan is a small, island country, people had no choice but to live in peace with one another, including people from different cultures. Does this inclination have its roots in Shintō?

WILTSCHKO   In Europe, borders were largely determined by people. If you wanted more territory, then you invaded another country and took someone else’s land. In Japan this didn’t happen to the same extent because the coastline served as a natural border.

Japan is plagued by many natural disasters, to be sure, but the land is rich and the seasons color the natural landscape in beautiful ways. Maybe that’s why a monotheistic belief system did not evolve here. Who would put their faith in an omnipotent god when an earthquake can wipe away entire communities five minutes later? The bounties of nature, on the other hand, were seen as being the workings of divine forces that needed to be respected and cared for.

Conditions are completely different in desert environments, where many Abrahamic traditions emerged. Survival in such harsh surroundings hinged on unifying people’s faith in a single deity.

INTERVIEWER   You’ve spoken of your vocation as a Shintō priest as a calling. Why have you chosen this path?

WILTSCHKO   Everything within a Shintō shrine has a purpose. There is a need, a story, a history to everything you find there. It’s an expression of a rational, profound, and beautiful worldview.

There are very few non-Japanese priests, however, and I was initially nervous about what people would think. But I ultimately chose this path after being encouraged to do so by my seniors, who reassured me by saying that not allowing foreigners to enter the priesthood would be “very un-Japanese.” 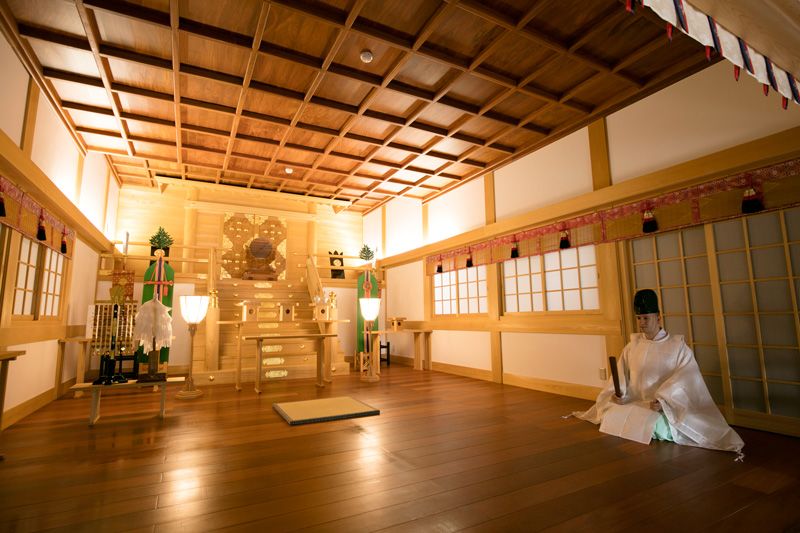 In the noritoden, the hall for the recitation of Shinto prayers.

One description of Shintō is that it’s the great path toward what is everlasting in heaven and earth. It’s a path of infinite scale that endures for eternity. It wouldn’t be infinite if limits were placed on the nationality of adherents. Being open to all is a fundamental tenet of Shintō.

In today’s Japan, though, this inclination to accept and embrace all has become somewhat distorted. It’s often construed negatively as something that means simply placating others.

INTERVIEWER   In other words, equating tolerance and selflessness with a lack of personal conviction. 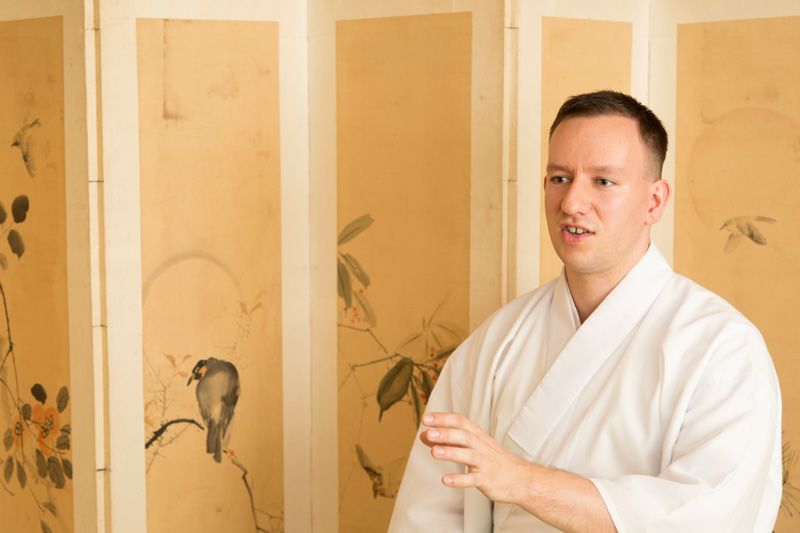 WILTSCHKO   That’s right. Such an interpretation could prompt many Japanese people to reject the tradition of embracing other cultures, thinking that they need to become more assertive. But when Buddhism was imported, it didn’t clash with or replace native elements; it was rearranged to fit into the existing scheme of things.

This process of accepting and rearranging can be seen very clearly in the design of Shintō shrines. Traditionally, there was no preoccupation with keeping old things the way they were; new approaches were willingly adopted in an effort to make improvements. There may be a tendency to stress the unchanging aspects of Shintō since antiquity, but there have been a great many adaptations over the years. At the same time, though, while the outward manifestations may have changed, the inner spirit has endured without modification.

INTERVIEWER   What does that “inner spirit” mean?

WILTSCHKO   I feel the Japanese people have traditionally had a very positive outlook, unfailingly looking at the bright side of things.

In Christianity there is a doctrine that says humans are born in sin. People in their lives strive to lighten this load, but there is no way to be completely free of original sin.

In Shintō, on the other hand, people are regarded as being fundamentally pure, innocent, and good-natured; since we’re all born in that pristine state, newborns are considered to be closest to divine innocence. As we go through life, though, we accrue sin and become corrupted. There’s a way to return to that state of purity, though, and that’s by divesting ourselves of the burdens we’ve accumulated in life—a ritualistic process called oharai in Shintō. I feel it this is a very positive, life-affirming way of dealing with the sins that we commit. 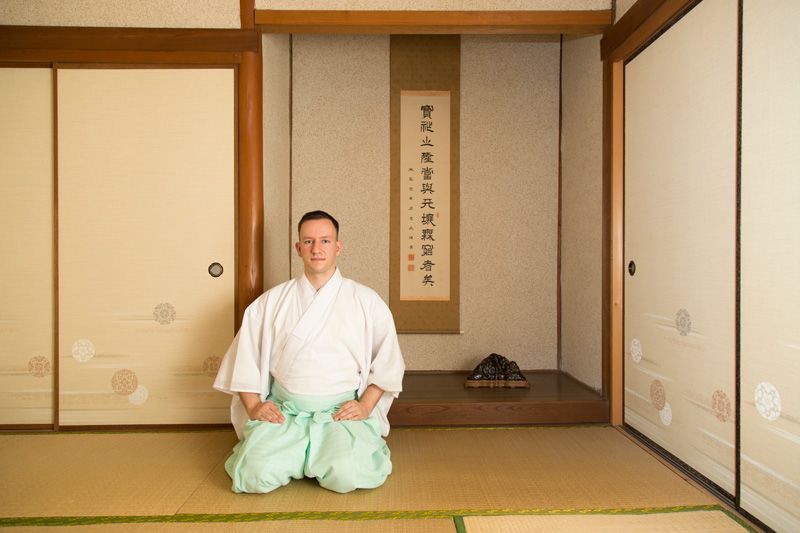 I think the emphasis on letting go of preconceived notions, which is part of ritual purification, in a way helped Japanese people to embrace Buddhism, and even to make it a part of something new—just like beef curry. When confronted with a new reality you must start from a clean slate and calmly select those things that work the best and that promise a brighter future.

I think there’s great wisdom in the Shintō approach to life. It can teach us a lot about how to lead happier lives by helping us deal with hardships and appreciate the lessons they teach us.

INTERVIEWER   Is this approach to life universal? Do you think other countries can embrace Shintō?

WILTSCHKO   I think it’s impossible to “internationalize” the world so that everyone thinks and acts in the same way. Each part of the world has its distinct natural landscape and culture, and this has a deep impact on the way humans behave. People will naturally develop a culture that’s most suited to the environment in which they live. When the landscape changes, however, so do the ways that people think.

What’s more important is to recognize differences and accept diversity of viewpoints. This doesn’t mean rejecting your own set of values and replacing it with someone else’s; it just means acknowledging the fact that other people may think differently. That’s all you have to do. There’s no need to either deny or imitate someone else’s beliefs.

Shintō makes this very easy to understand. The number of kami worshipped in Shintō is said to be yaoyorozu, which literally means 8 million. In other words, divine spirits are everywhere, and there is no single right answer in life. There are innumerable approaches. 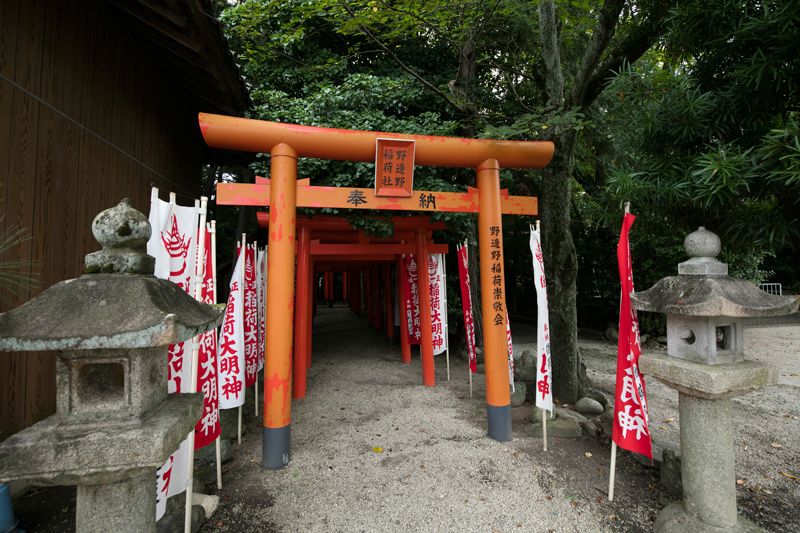 In the same way, it would be wrong to impose a single language, say, English, on all countries of the world in the name of internalization. We would then lose the beauty of the Japanese language. There are countless aspects of Japanese culture that are only found here and that should be regarded with pride.

INTERVIEWER   What would you convey to the Japanese people from your unique perspective of a foreigner in a distinctively Japanese milieu?

WILTSCHKO   The longer I’m engaged in this occupation, the more strongly I hope that Japan will retain its innate qualities. I encourage Japanese people to also feel this way. Japan has so many great charms, and I want people here to recognize and take deep pride in them. It’s very important to maintain a positive inner spirit. You might say that it’s my mission or my calling to contribute to maintaining this spirit. 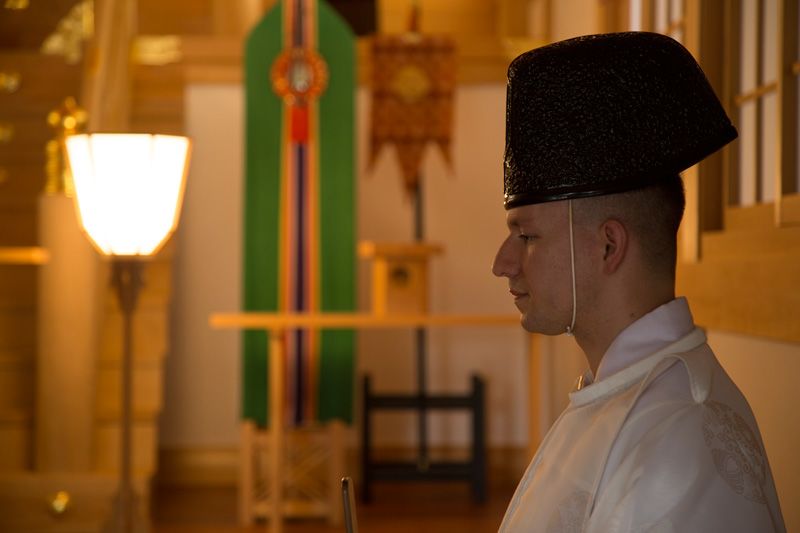 (Originally published in Japanese on October 24, 2016. Banner photo: Florian Wiltschko in the formal attire of a Shintō priest in the noritoden of Nobeno Shrine. Photos by Kawamoto Seiya.)