"Bentō": A Feast for the Eyes and Stomach

Show Me Your “Bentō”!: Under the Cherry Trees

Culture Lifestyle Apr 15, 2016
Each spring, Japanese people hold picnics under the cherry blossoms. Families, friends, and colleagues bring food and beverages from home or the store to share. Nippon.com went to a Tokyo park to find out what the cherry-blossom viewers were eating and drinking.

Full of Color and Variety 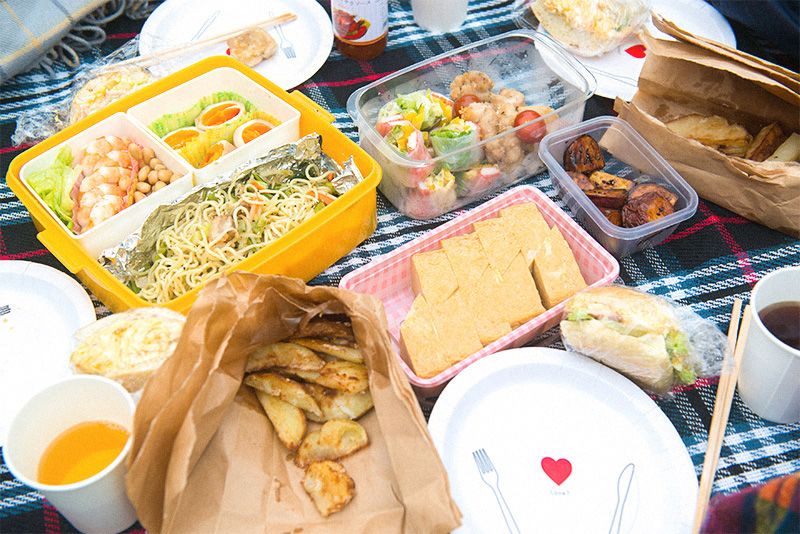 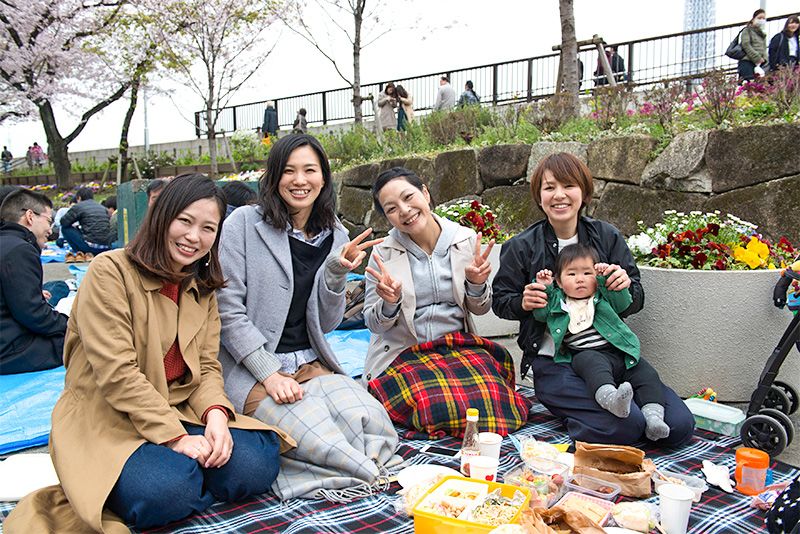 Each spring, people gather under the cherry blossoms to enjoy hanami (flower-viewing) and to picnic with friends. What do they bring with them to eat and drink? To find out, we visited a park in Asakusa, Tokyo, in April, going from group to group and asking them to “Show us your bentō!”

The lunch shared by a group of women friends was spread out over a checkered mat on plates with a heart design between a knife and fork. Originally from Kagoshima Prefecture but now living in Tokyo, they prepared bentō lunch boxes that were full of color and variety. Spaghetti mixed with pork and vegetables, salad of boiled shrimp and soybeans, and Vietnamese fresh spring rolls crammed with vegetables were lined up alongside karaage fried chicken, eggs soft boiled to perfection, and tightly packed dashimaki tamago (rolled omelet flavored with dashi broth). Rounding out the feast were French fries and generously filled sandwiches. 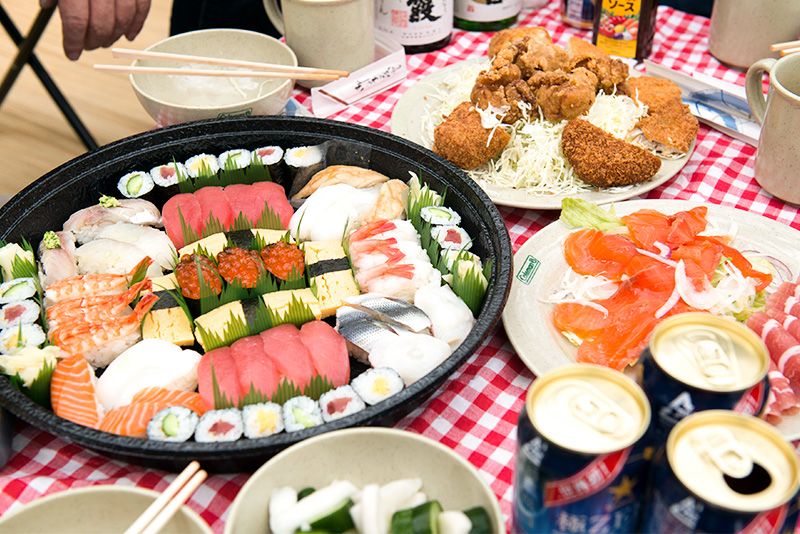 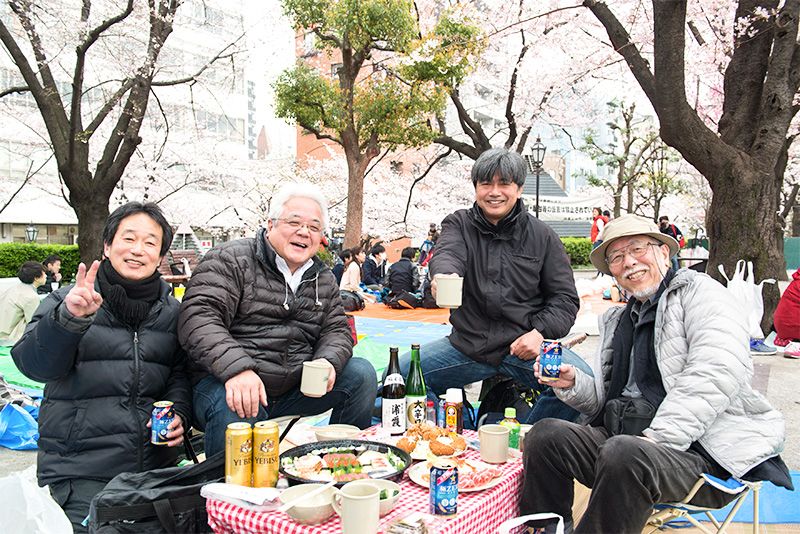 A group of retired men had secured a prime spot from where they could see Tokyo Skytree lit up in seasonal pink. Each spring, these former advertising agency employees and ad production partners get together to enjoy the cherry blossoms. Their meal centers on sushi, a popular choice for celebrations. Because they ordered in advance from a sushi shop in a department store, the toppings are of the highest quality, looking fresh and appetizing. There are plenty of side dishes too, such as smoked salmon salad, karaage and other fried foods, and tsukemono (pickled vegetables).

“There are more foreign tourists these days,” one of the gentlemen commented. “We want to show them the best in Japanese food.”

Pink Food and Drinks for the Season 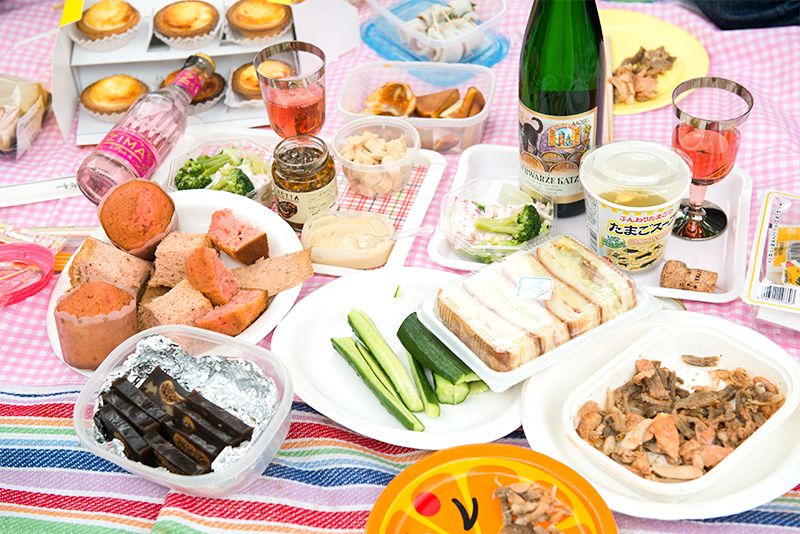 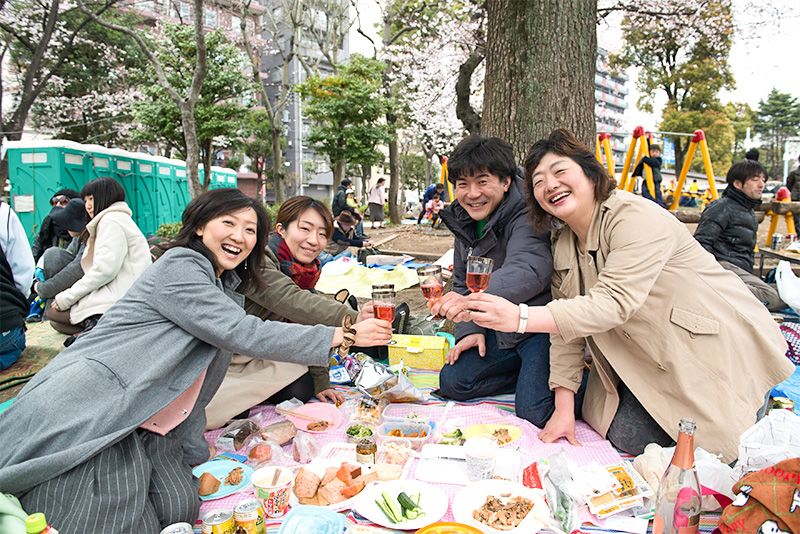 Colleagues from an IT company sat around a neatly prepared, full-course meal that was a feast for the eyes as well as the taste buds. They work in different departments but share a party-loving friend—dubbed the “banquet manager”—who brought them together. “I brought pink-colored food and alcohol to fit the hanami theme,” one said. The chef among them was the male, who prepared homemade smoked cheese and eggs, as well as purchasing a parade of delectable desserts. The “banquet manager” was very thorough in preparing for the picnic, picking up sliced meat from a kebab shop by Asakusa Station and asking a local liquor store to deliver drinks directly to their picnic spot. They have prepared more than enough to keep the party going—both fancy dishes and simple fare like sliced cucumbers. With all this food, the smiles never stopped. 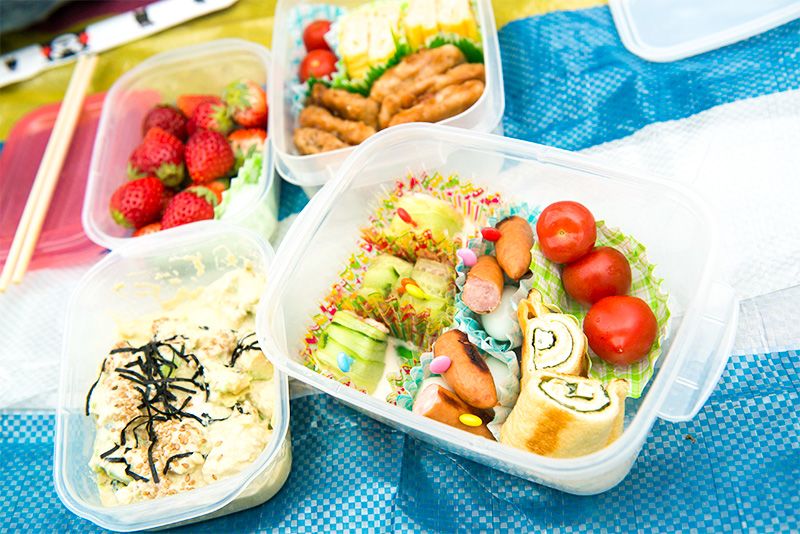 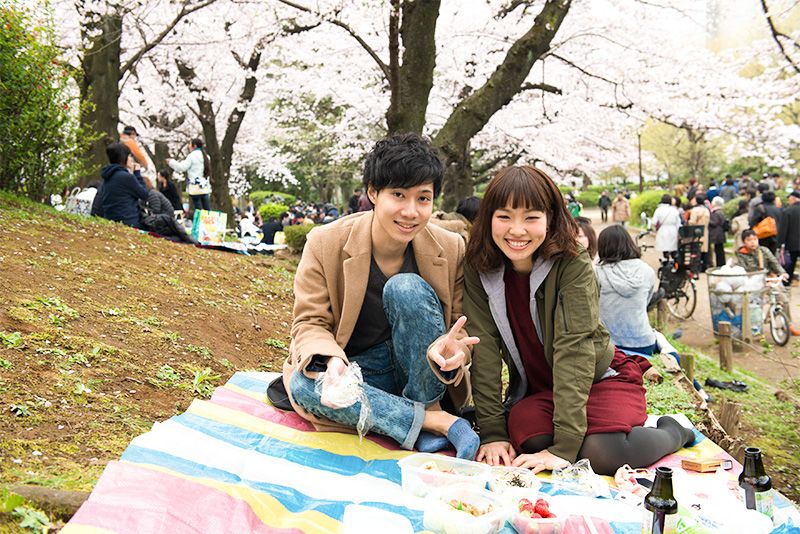 A couple in their twenties who have been dating for two and a half years were lunching on a bentō she had lovingly prepared. It was not only full of variety and adorable colors but also well-balanced nutritionally. It was obvious that she had put great care into preparing it to make it appetizing—rolling up seasoned crab sticks in thinly peeled cucumber strips and wrapping aburaage (deep-fried sliced tofu) around shiso and cheese. She prepared the meal in about two hours, referring to cookbooks and the Cookpad recipe site. The pièce de résistance was a salad of mashed avocados and tofu, dressed with mayonnaise and filled out with cucumber and chicken fillet. When asked for his favorite dish, his reply, of course, “They’re all great!” 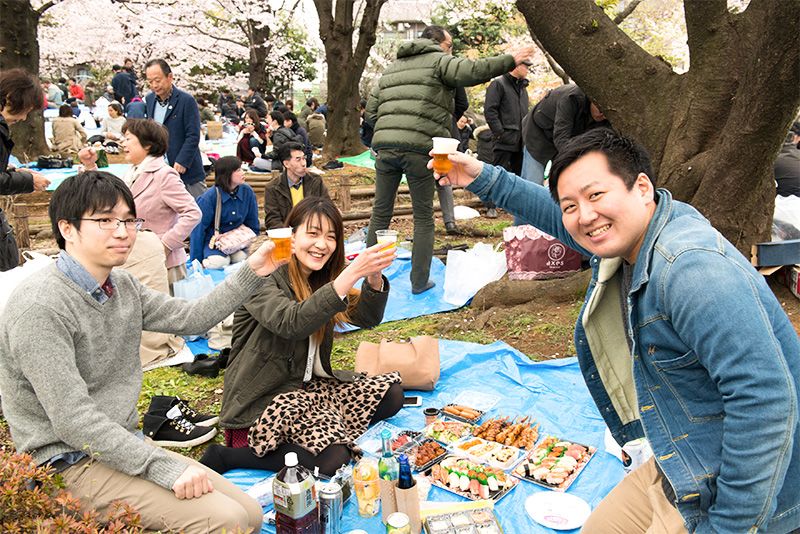 The next group went to the supermarket looking for food that would taste good even when cold, that was easy to eat, and that everyone would like. They came away with dishes like yakitori, roast beef salad, meatballs, and sushi. The woman who planned the outing also brought handmade onigiri rice balls; she kept the nori (seaweed) separately so it could be wrapped around each ball just before eating, ensuring that it would be fresh and crackling. She prepared two types of onigiri: one containing salmon and spring onion and the other with chopped shiso flavored with wasabi soy sauce. The friends were classmates during elementary and junior high school in Mie Prefecture but now live in Tokyo.

“The number of cherry trees in Tokyo is amazing,” she said, “and so is the number of people celebrating the blossoms!

(Originally written in Japanese by Yanagisawa Miho and published on April 8, 2016. Photographs by Kodera Kei)