Society May 1, 2018
Electronic toilets equipped with bidet functions have become standard appliances in Japanese homes. At present, more than 80% of households with two or more people own high-tech toilets.

According to a Cabinet Office consumer confidence survey conducted in March 2018, 80.2% of households of two or more people own an electronic toilet with a bidet function. On average there are 113 such toilets per 100 households.

Leading Japanese toilet-maker Toto became synonymous with electronic toilets when it introduced the first commode featuring a “washlet” function in 1980. However, it took people time to warm up to the idea of a toilet shooting a jet of warm water. In 1992, when statistics were first compiled, only 14.2% of Japanese households owned one. This figure has steadily risen, though, until high-tech toilets have become standard equipment in Japanese homes. 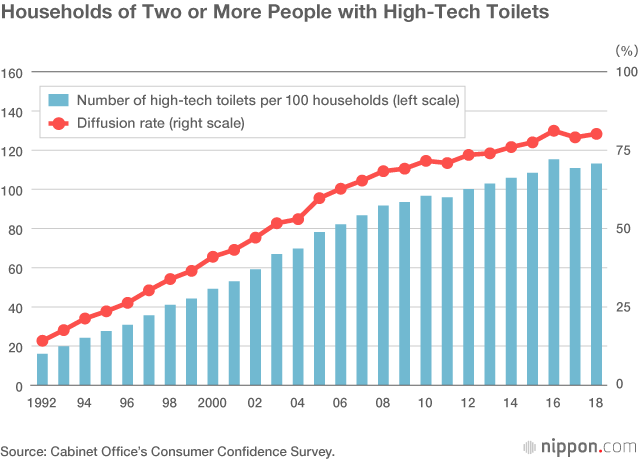 Electronic toilets have become popular among consumers overseas as well. Chinese tourists to Japan in particular have been purchasing such toilets in large quantities during their visits. Upscale hotels around the world also continue to install Japanese high-tech toilets. In response, Japanese manufacturers of sanitary equipment are working to boost their overseas sales.