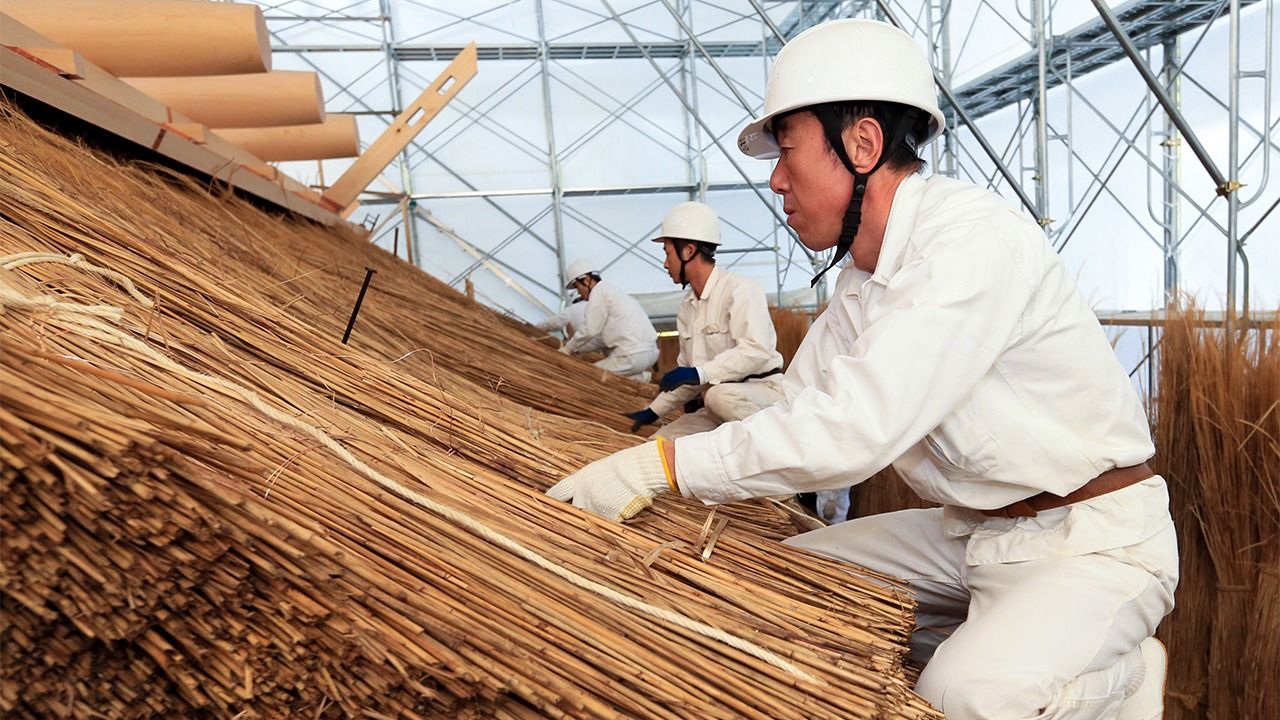 In December 2020, traditional skills, techniques, and knowledge for the conservation and transmission of wooden architecture in Japan were added to the UNESCO representative list of Intangible Cultural Heritage of Humanity. Collectively, they are the twenty-second element from Japan, following the addition of ritual visits of deities in masks and costumes in 2018.

The traditional techniques apply knowledge of wood and other natural materials that require periodical restoration in an architectural context, harmonizing original parts with those that need replacement.

They include the process of collecting the sap from urushi (lacquer) trees, and the production of entsuke gold leaf using leaf-beating papers made of ganpi paper that has been treated in a mixture including astringent persimmon juice and lye. 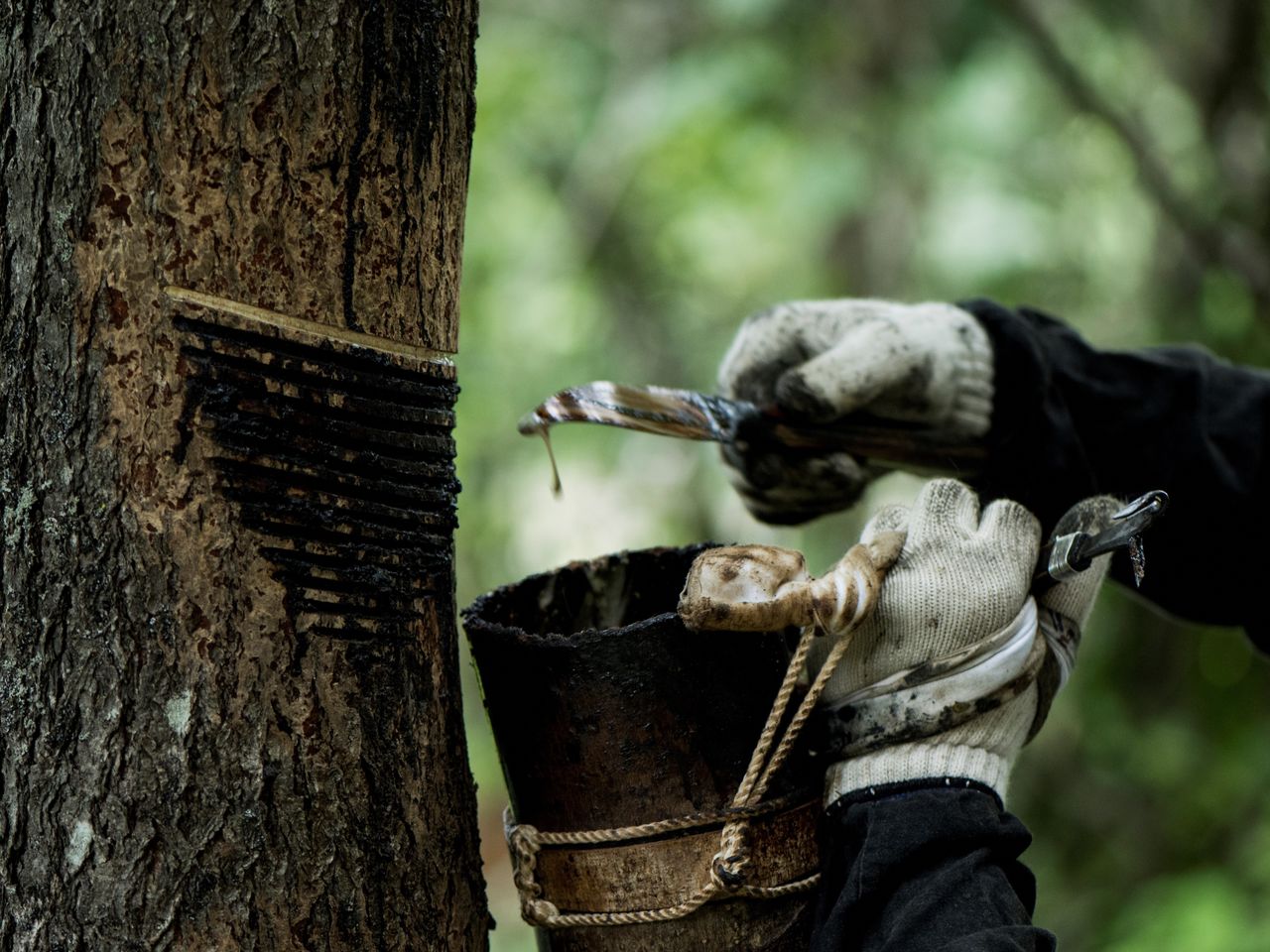 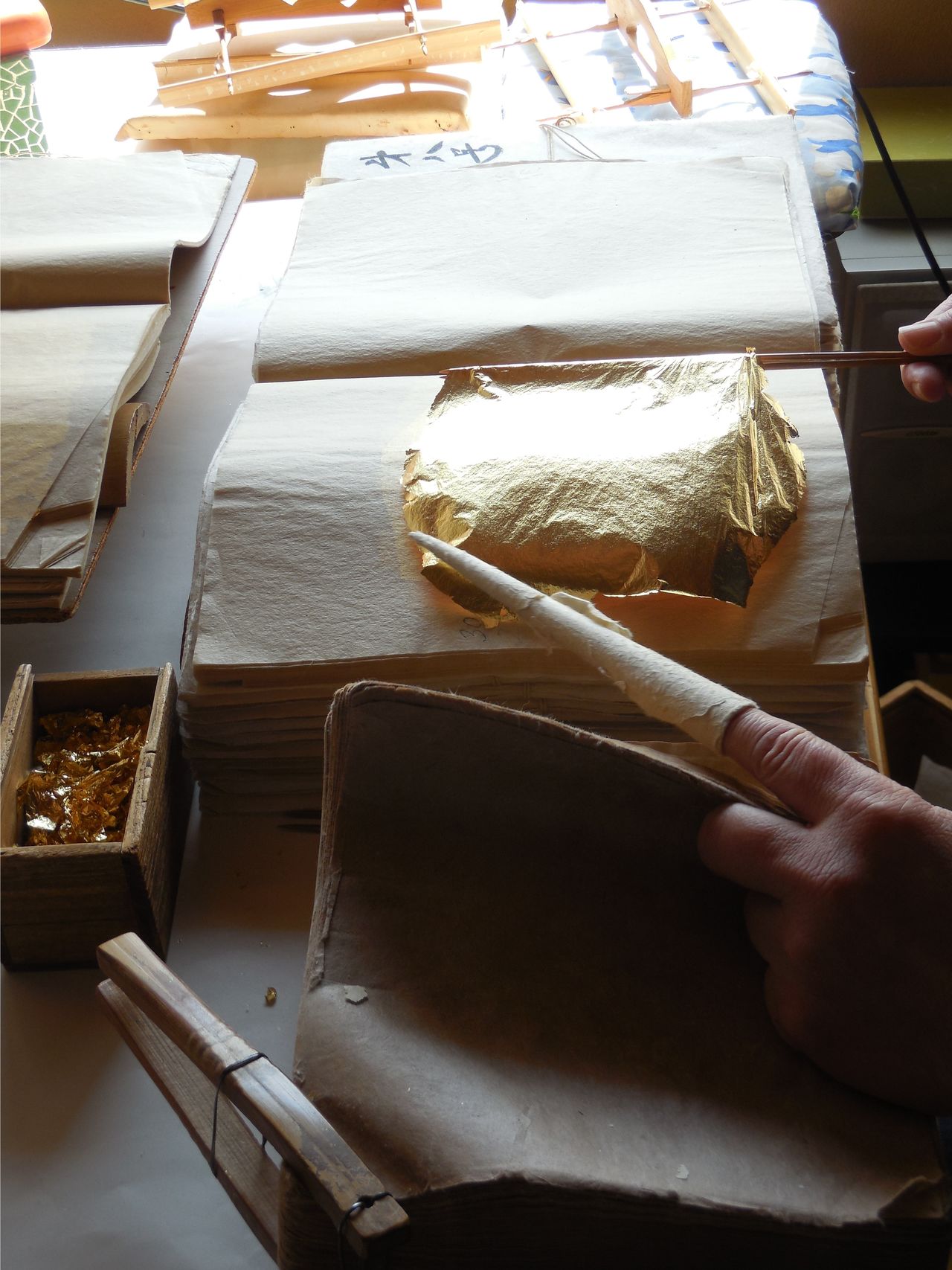 Traditional Skills, Techniques and Knowledge for the Conservation and Transmission of Wooden Architecture in Japan

Ritual visits of deities in masks and costumes, as represented by 10 events in 8 prefectures, including Oga no Namahage (Akita Prefecture) and Akusekijima no Boze (Kagoshima Prefecture). Masked deities visit people’s houses at special points of the year like New Year to warn of idleness and to pray for good health and safety. 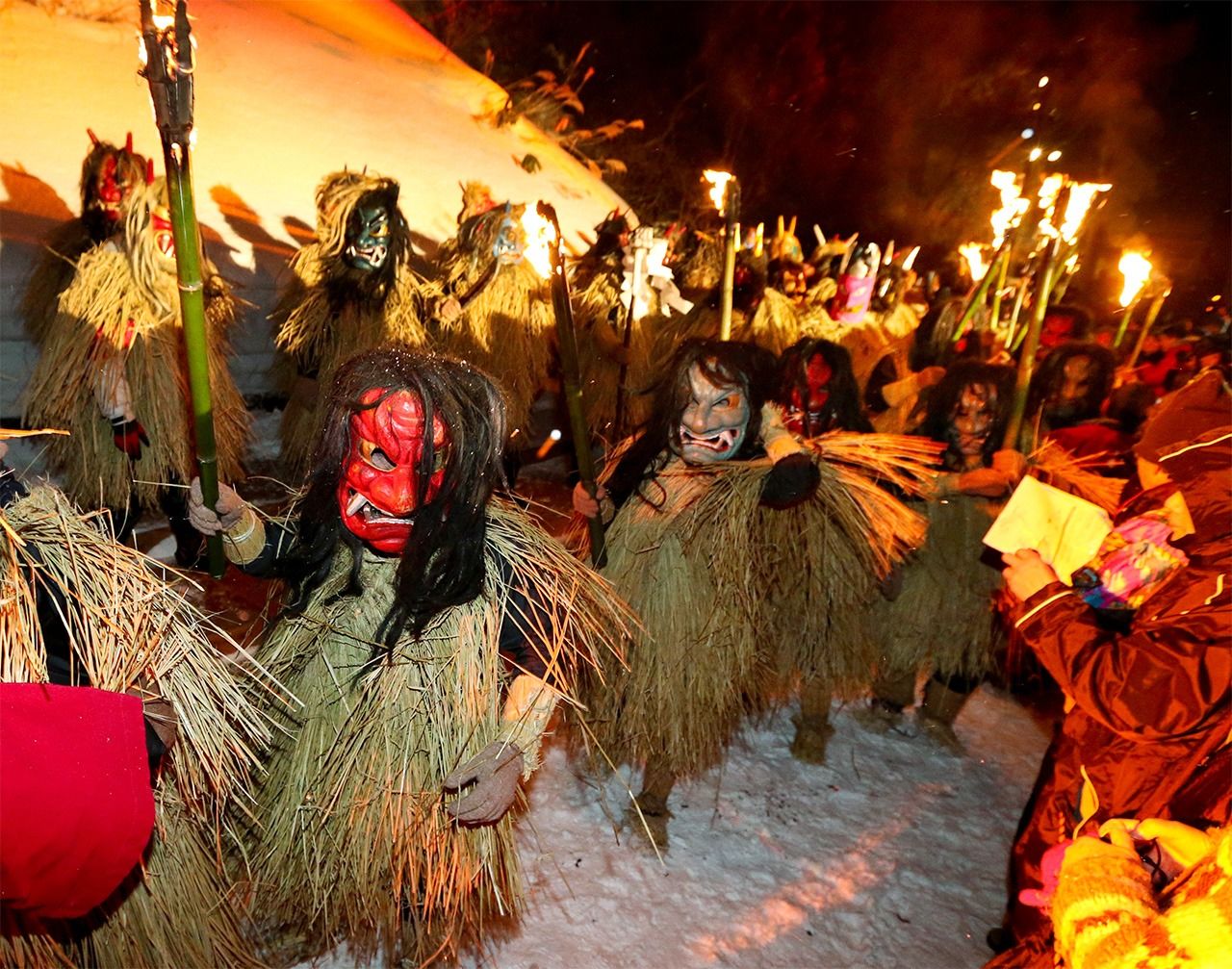 The Oga no Namahage festival. (© Jiji)

Japan has 33 festivals in 18 prefectures that parade decorative floats, such as the yamahoko floats of Kyoto Gion Festival and the Hakata Gion yamakasa floats. The floats act as transportation for deities and are used to pray for safety in the community, ward off evil, and bring good crops. 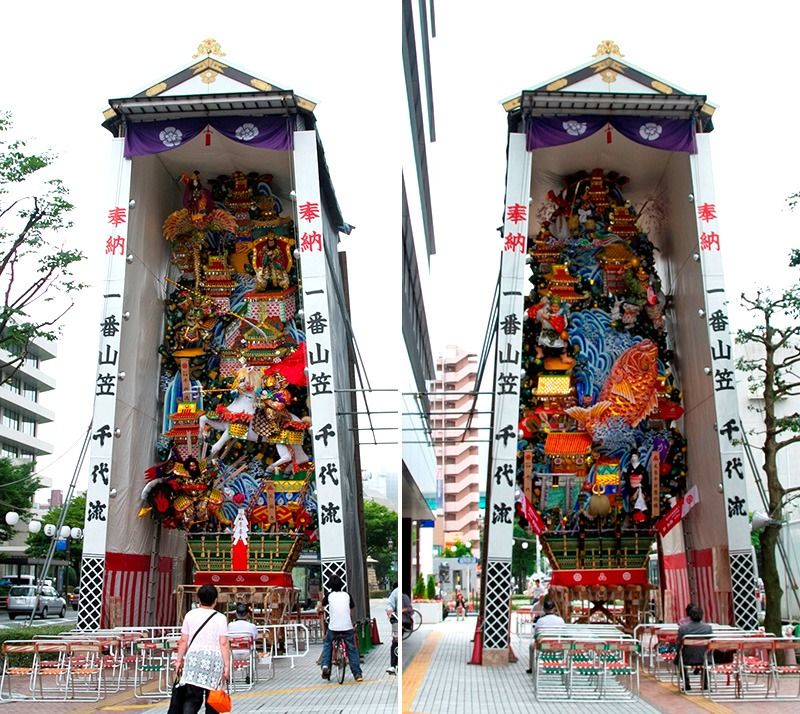 Traditional handmade paper, represented by three varieties: hosokawashi from Saitama Prefecture, honminoshi from Gifu Prefecture, and sekishūbanshi from Shimane Prefecture. These types of washi are made using traditional craft techniques from the eighth century and the ancient production methods, such as using the fibres of the paper mulberry plant, continue to be protected.

Dietary customs characterized by their fresh, varied ingredients, presentation to convey the beauty of nature, and excellent nutritional balance. This cuisine is closely connected with annual events such as New Year, rice planting, and harvest festivals.

A Shintō performing art dedicated to the deities at the Nachi Fire Festival held regularly each year on July 14 at Kumano Nachi Shrine in Nachikatsuura, Wakayama Prefecture. The shrine is one of the elements of the World Heritage Sacred Sites and Pilgrimage Routes in the Kii Mountain Range, while the performing art has more than 600 years of history.

This ritual is held on the first Sunday every June to pray for good harvests in Kitahiroshima, Hiroshima Prefecture. Cattle decorated with beautiful saddles plow the fields and girls form a row to plant rice seedlings. 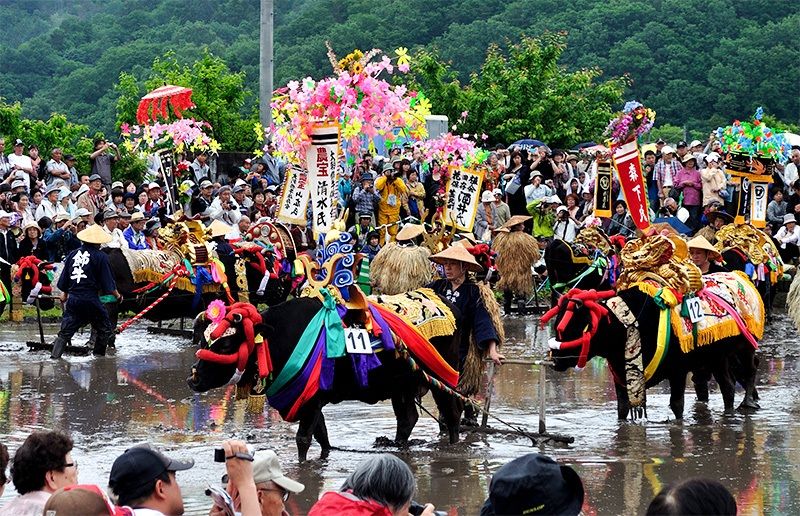 A series of Shintō purification dances performed as an offering at the annual Sada Shrine Gozakae festival held on September 25 in Kashima, Shimane Prefecture. They have influenced kagura dances in regions nationwide.

A dance performed in the Ryūkyū Kingdom, which lasted from the fourteenth through nineteenth centuries, to welcome delegations from imperial China. Now the National Theater Okinawa continues the traditions and holds performances.

Silk weaving mainly from around Yūki, Ibaraki Prefecture, and Oyama, Tochigi Prefecture. These are both areas that have had a long history of prosperous sericulture industry. In the Nara period (710–94), this fabric was paid to the Imperial Court as tax.

A combination of traditional Japanese dancing and dancing from China and the Korean peninsula accompanied by songs. The dances have been passed down mainly through the Japanese imperial court and are performed at court ceremonies and feasts.

Weaving techniques for fine hemp fabric made from the ramie plant in the Uonuma region, Niigata Prefecture. In the Edo period, the fabric was also used as tax payment to the shogunate.

Agricultural ritual from Ishikawa Prefecture in which prayers are given each February to the deity of the rice field for a good harvest before planting starts and then gratitude expressed in December for the harvest. During the ritual, the rice farmers act as if the deity is actually there.

A series of masked dances from Hanamaki, Iwate Prefecture, which was started by mountain priests who worshipped Mount Hayachine as a deity. The dances are performed at a festival held on August 1 at Hayachine Shrine. 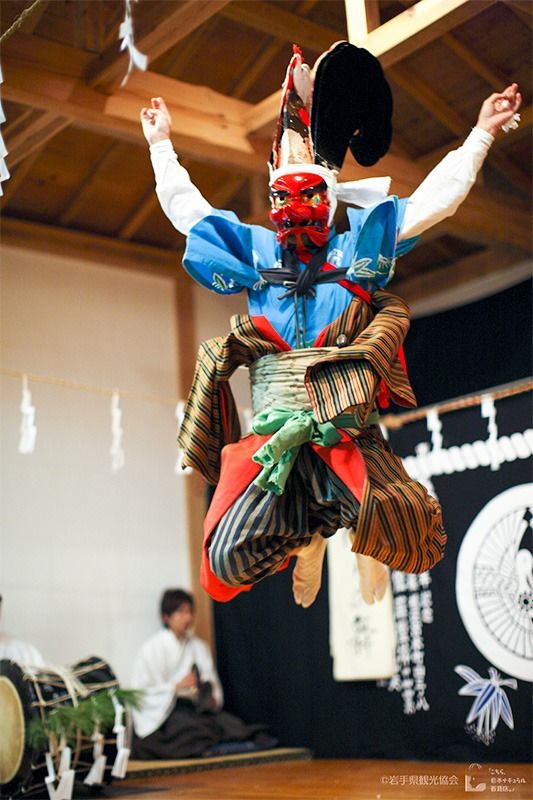 A dance from Sendai, Miyagi Prefecture, which simulates the planting of rice and is performed to pray for an abundant harvest that year. It was originally a lunar New Year event, but is now danced at temple and shrine festivals.

A festival of prayer for good catches, abundant crops, and prosperity in business. It takes place on January 15 in Miura, Kanagawa Prefecture, and girls dance with fans and bamboo sticks decorated with colorful paper strips and bells.

A bugaku dance performed on the second day of the New Year at Dainichidō, Ōhirumemuchi Shrine, in Kazuno, Akita Prefecture, to pray for bumper crops and good health. Elders in four communities continue to pass on the heritage of this dance to the younger generations.

A ritual held at Yahashira Shrine autumn festival on October 12 in Nara, Nara Prefecture. One by one, performers deliver the lines of military commanders from the Genji and Heike clans using unique intonation. The ritual is mainly performed by newly recruited young men.

A series of dances that have been passed down by the Ainu people living in Hokkaidō. Apart from ritual dances with strong ceremonial aspects, there are also dances that are entertaining or improvisational.

Includes two types of theater—nō dance movements based on tales and kyōgen comic theater. It has had a huge influence on later forms of theater like bunraku and kabuki.

Puppet theater accompanied by chanted narrative and shamisen music. The puppets are each controlled by three people, giving them their characteristic lifelike movements. 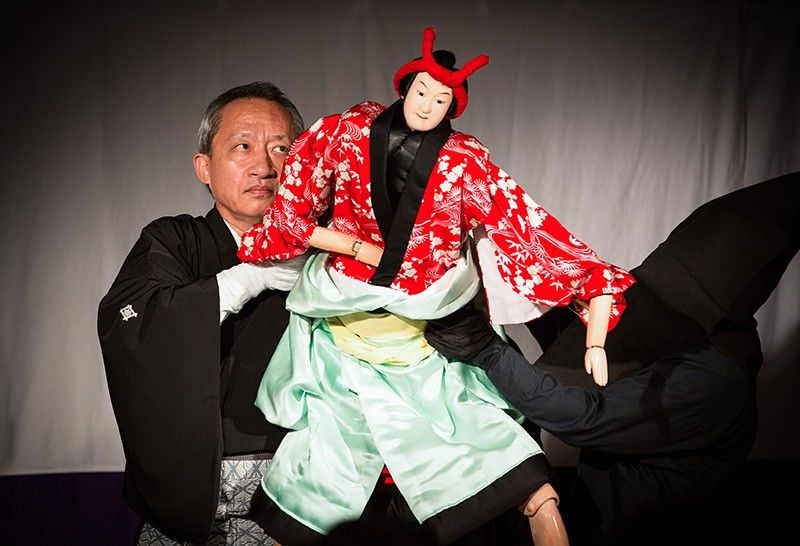 A form of theater especially popular in the Edo period (1603–1868). It has continued up to the present day, portraying stories based on legends, historical facts, and other themes, as well as dramatizations of actual love suicides.

(Originally published in Japanese. Banner photo: Thatching work on the Tonotamagaki-minamigomon gate at the Ise Shrine in Mie Prefecture. Photo taken in 2012. © Jiji.)