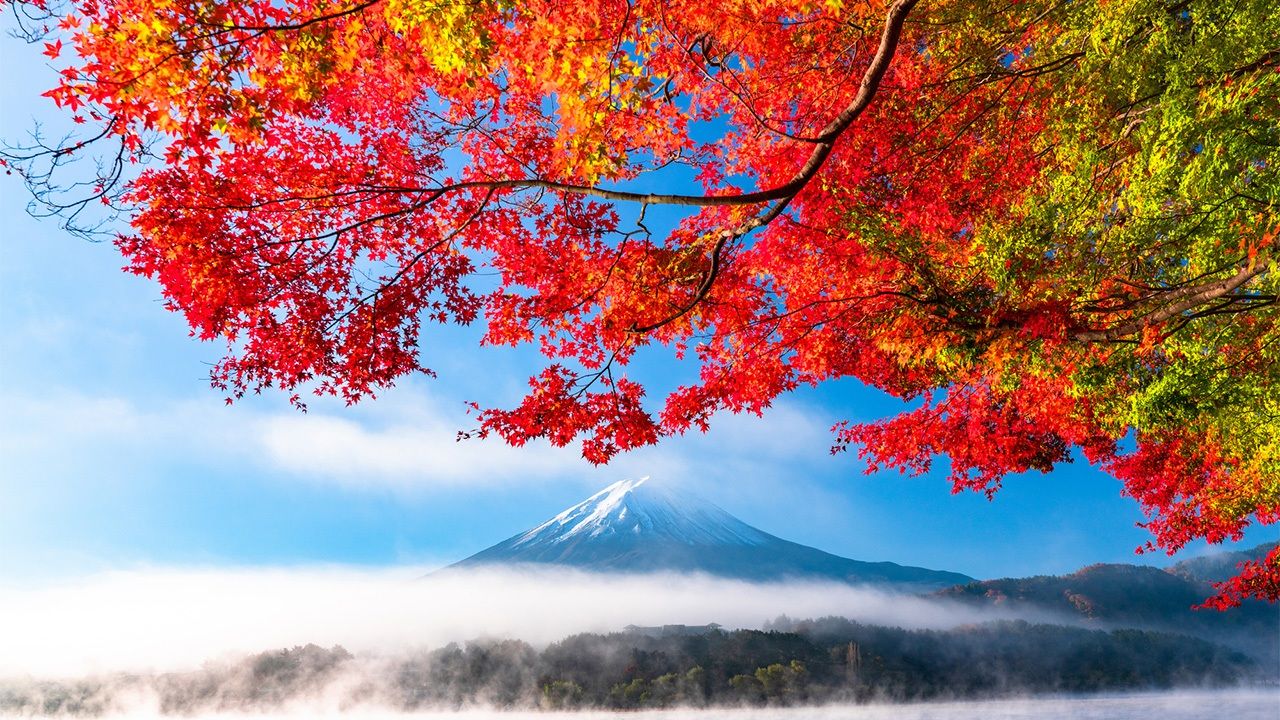 Society Lifestyle Aug 30, 2019
In Japan, autumn is a time for enjoying colorful foliage and various leisure pursuits associated with the season.

As autumn approaches in Japan, the fierce heat of summer relents, cool breezes blow, and the first red dragonflies start to hover. Crickets cry at morning and evening instead of cicadas, and towering cumulonimbus clouds give way to mackerel skies.

The red dragonfly (left) and bands of clouds known as urokogumo are common sights in autumn.

The seasonal transition is not all peaceful, however. Around 25 typhoons develop near Japan from spring onward each year, although only a handful actually make landfall in the country. While storms are more common in August, they cause the most damage in September.

A more welcome phenomenon is the autumn foliage that sweeps the country. The brilliant red and yellow leaves of the momiji, or Japanese maple, have inspired poets since ancient times. Walking along an avenue lined with golden ginkgo trees, while fallen leaves crunch underfoot, is another of the pleasures of autumn. Colorful trees adorn natural landscapes as well as the grounds of castles, parks, shrines, and temples across the country. 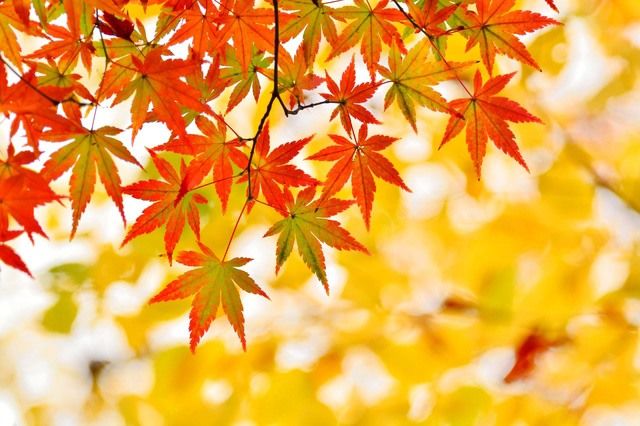 The colors of autumn.

A Time for Reading, Sports, and the Arts

Autumn has become connected with a number of leisure activities in Japan. The modern association with getting stuck into a good book is said to have been prompted by writer Natsume Sōseki’s quotation of a Chinese poem in his 1908 novel Sanshirō: “Autumn is here, let us read by the lamplight.” Every year events are held around Japan over the “autumn reading weeks” that last from October 27 to November 9.

The second Monday in October is Health and Sports Day, a national holiday commemorating Tokyo becoming the first Asian city to host the Summer Olympics in 1964. From 2020, this will be renamed Sports Day, and in that year only the holiday will be rescheduled to coincide with the opening ceremony of the second Tokyo Olympics.

Many schools host their sports day events in the autumn with fun and varied programs. In tamaire, children compete in teams, simultaneously throwing small colored balls into a basket, while in ōdama korogashi, they race to roll along a ball as tall as themselves. Other common activities are tug-of-war and folk dancing. Large crowds of family members and other onlookers support the participants. 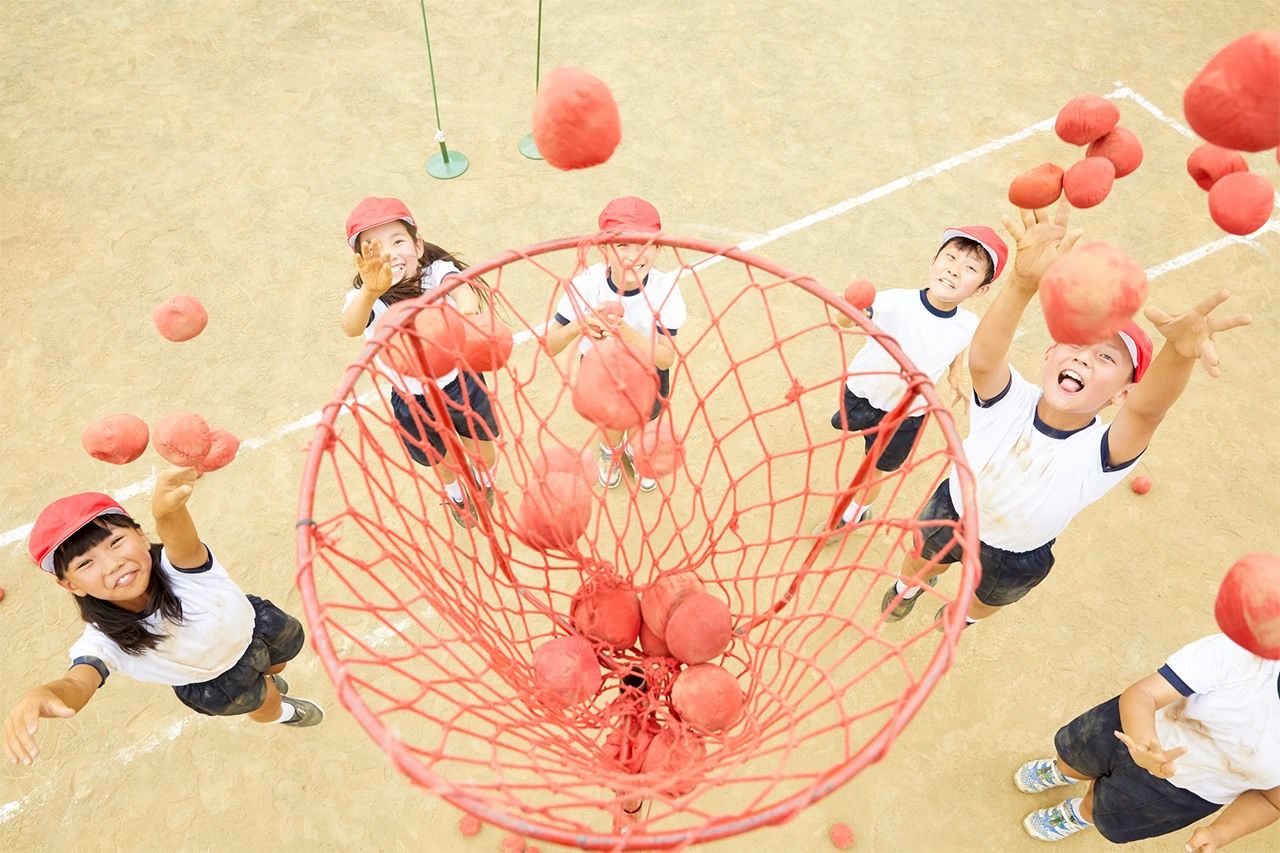 The arts are also associated with the fall, and this is said to be due to the number of competitive exhibitions like Nikaten and Nitten that are held at this time. Art galleries often encourage the public to follow this tradition and make an autumn visit, while universities hold cultural and music festivals. 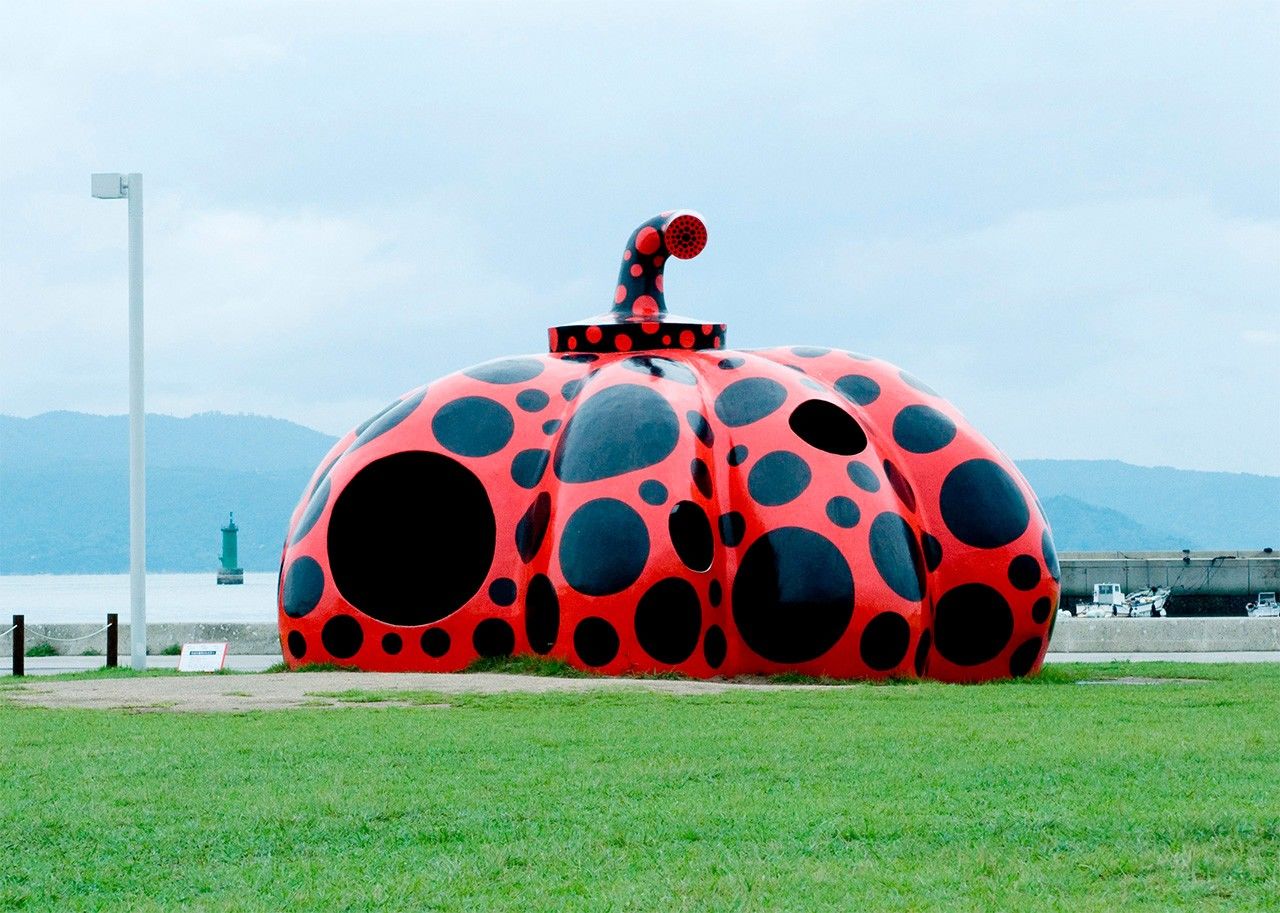 Artist Kusama Yayoi’s autumnal Red Pumpkin can be seen at the port of Miyanoura on the island of Naoshima off Shikoku. (Photo by Aochi Daisuke; courtesy Setouchi Triennale)

Japan celebrates the chrysanthemum in various festivals held across the country from October to November. Although not an official national flower, it appears on the imperial seal, which is found on some coins and the covers of passports. 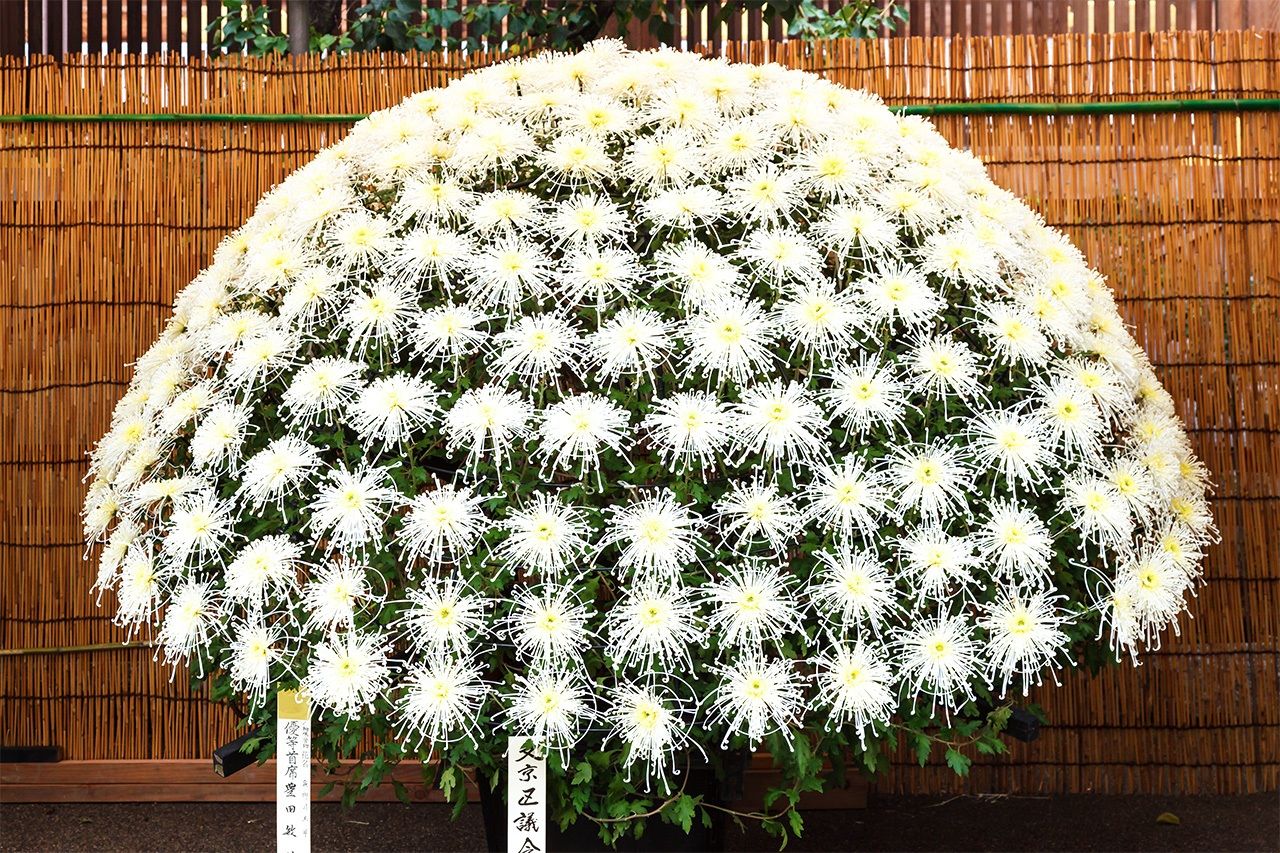 A senrin-zaki arrangement of chrysanthemum blossoms branching out from a single stem. (© Miwa Noriaki)

Autumn is also a time for appreciating good food. Around October is peak season for the Pacific saury, which is said to have numerous health benefits. A perfect way to serve it is grilled with salt and sprinkled with juice from a sudachi, a type of citrus fruit, alongside grated daikon radish and soy sauce. 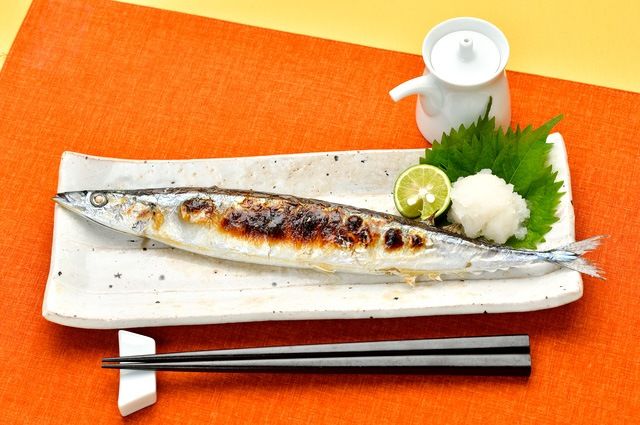 A time-honored way of enjoying saury.

Matsutake mushrooms are a byword for fine dining at this time of year. An expensive pleasure, three or four domestically grown, high-quality specimens may cost around ¥60,000; epicures on a budget may choose more affordable imported specimens. Long steeping brings out the rich flavor and aroma of the mushrooms. Matsutake may be cooked simply with rice or combined in a more complex dish, such as matsutake dobin mushi, prepared with stock, ginkgo nuts, and chicken in an earthenware teapot. 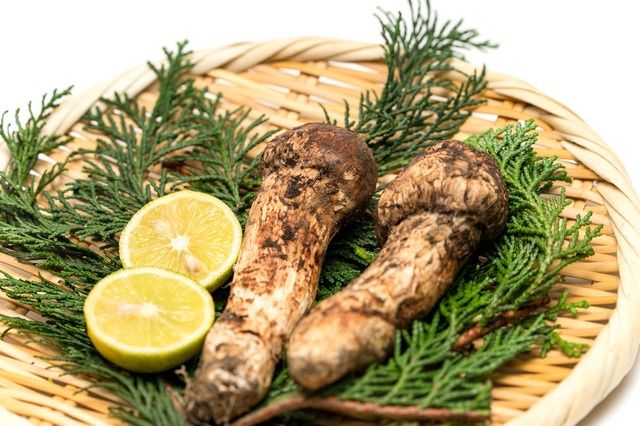 In the harvest season, chestnuts, Asian pears, grapes, and persimmons line store shelves, while some people go out to special orchards to pick their own. Other tasty autumn foods include pumpkins, sweet potatoes, and newly harvested rice and fresh soba noodles. 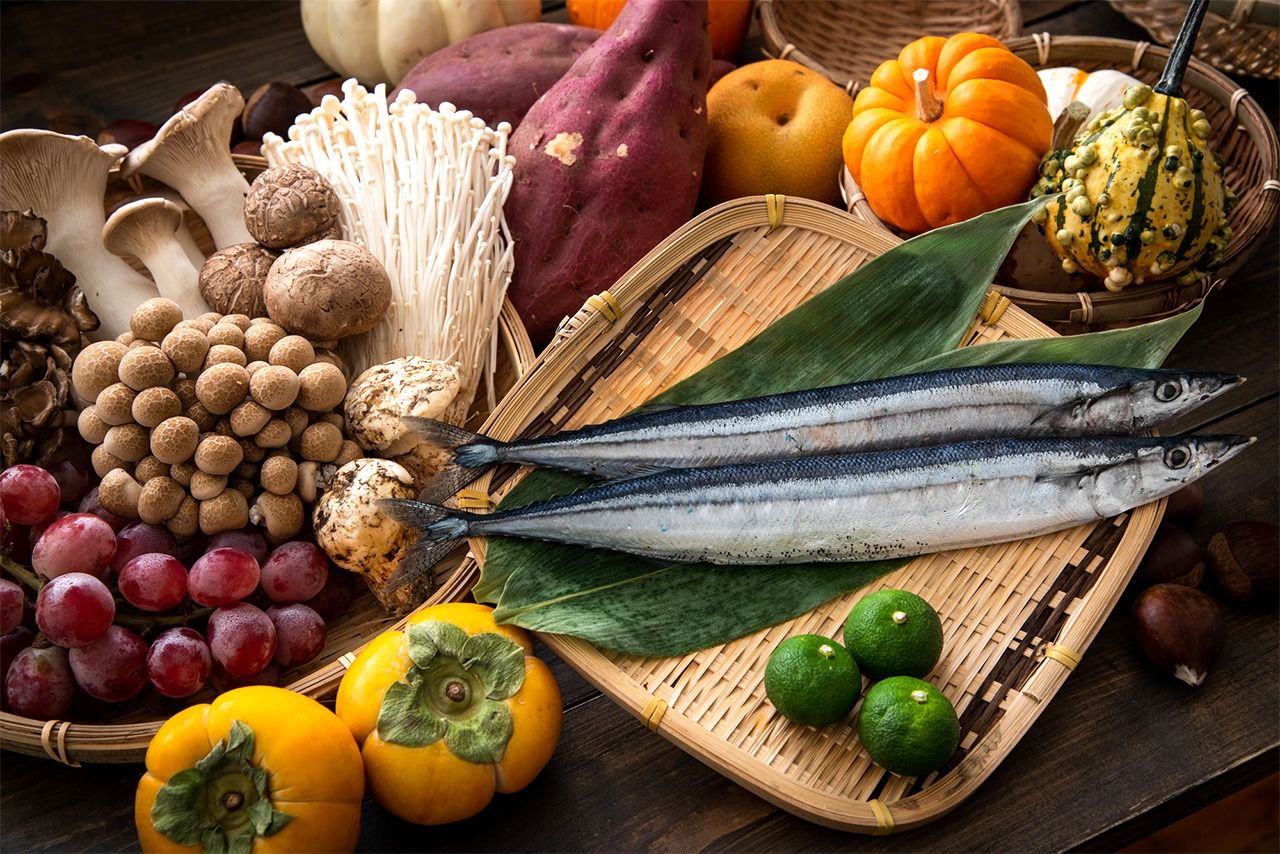 Autumn has long been thought the best time for tsukimi, or moon viewing. The fifteenth night of the eighth month on the old calendar is said to be ideal; this falls on September 13 in 2019. Moon-themed events are held across Japan on and around this date. 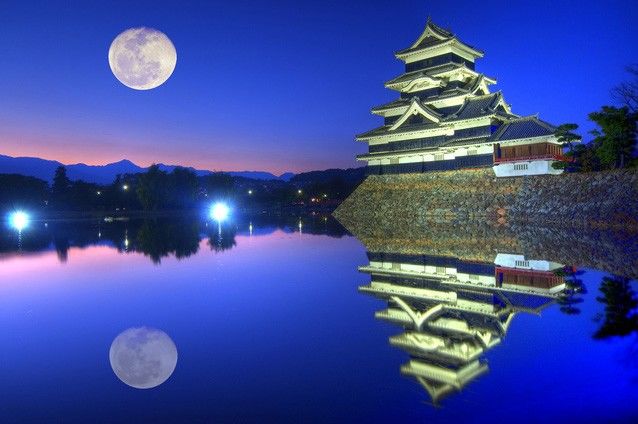 The full moon over Matsumoto Castle in Nagano Prefecture.

Twice a year, during the weeks centered on the spring and autumn equinoxes, Japanese people remember their ancestors and visit graves in the Buddhist custom of higan. In autumn the higanbana, known in English as the red spider lily, blossoms. More than 5 million of these flowers bloom in the city of Hidaka in Saitama Prefecture, drawing in tourists every year. 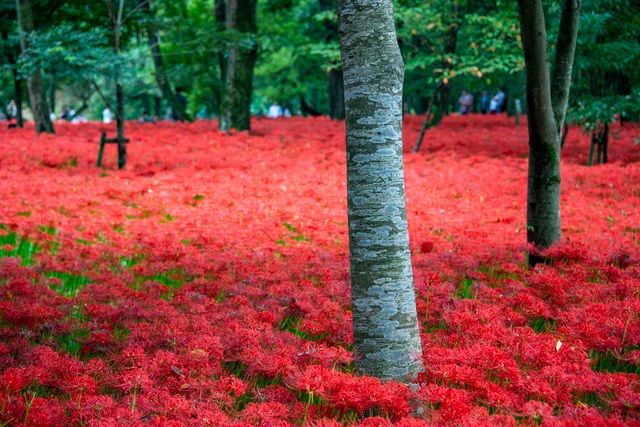 Halloween has also grown in popularity in Japan. In the 1970s, Harajuku toy store Kiddy Land started selling Halloween goods, and in 1983 it held its first parade to mark the festival in Omotesandō. More recently, cosplay fans have leapt at the opportunity to dress up for fun, and Shibuya’s scramble crossing has become known for its heaving crowds of Halloween revelers. 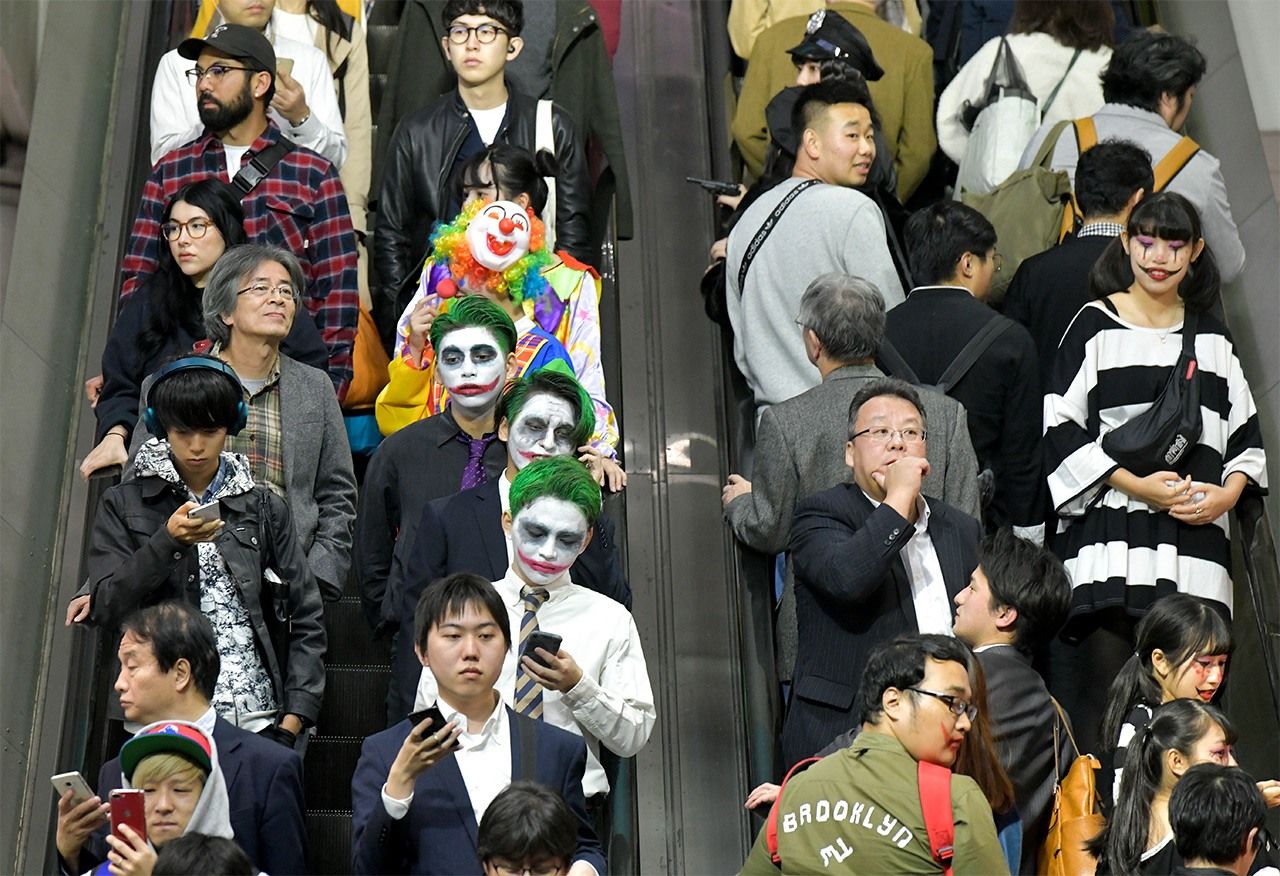 Costumes are nothing unusual at Shibuya Station at Halloween. Picture taken on October 31, 2018. (© Jiji)

In November, the Shichi-Go-San festival celebrates the healthy growth of young children, and families are a common sight at shrines around the middle of the month. 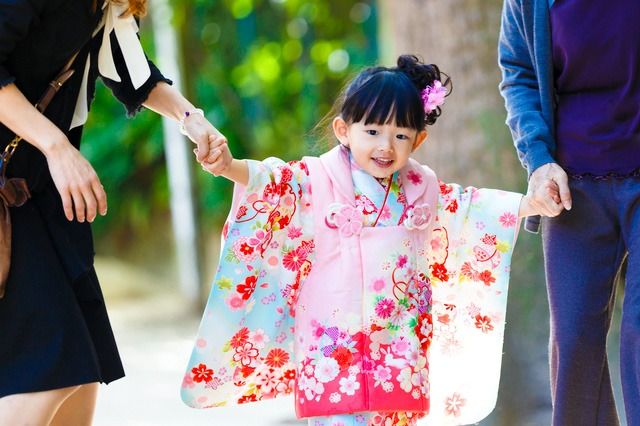 A three-year-old girl taking part in the Shichi-Go-San festival.

(Banner photo: The colors of fall in the foreground with early snows atop Mount Fuji.)