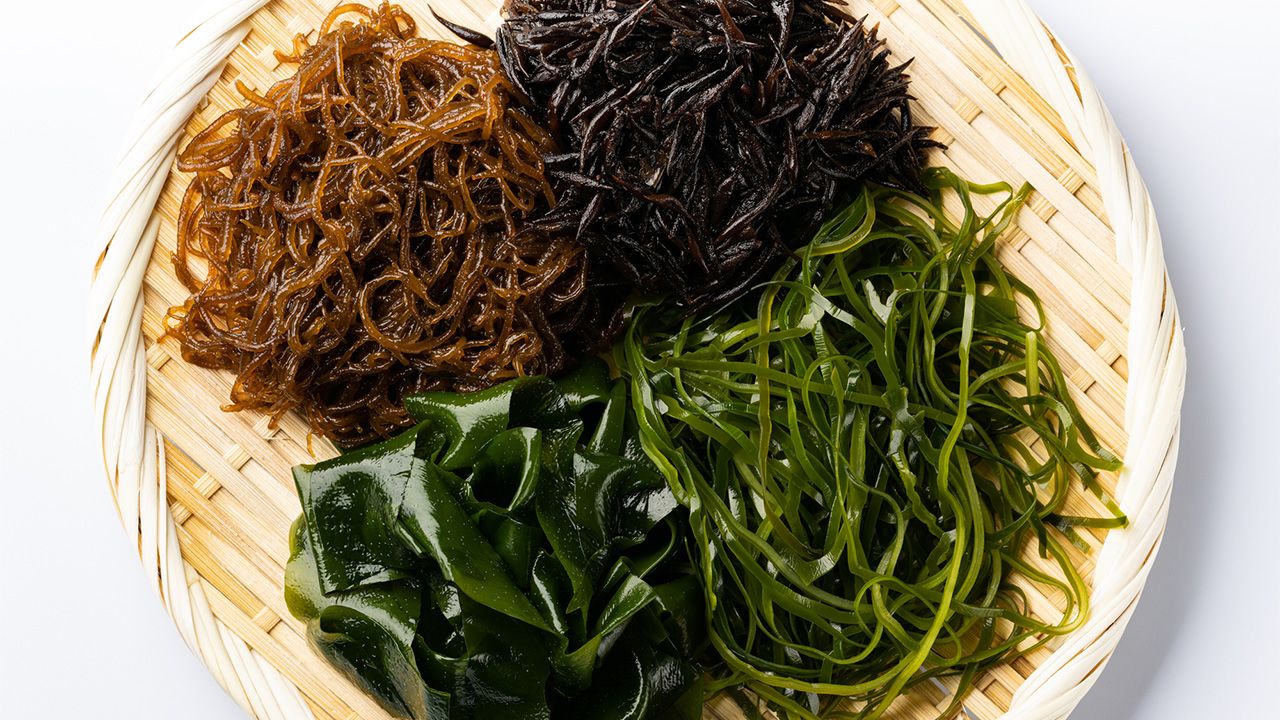 Japan’s Most Popular Types of Seaweed

Food and Drink Oct 7, 2022
Japan is surrounded by sea, and more than 100 types of edible seaweed, including nori , wakame, and konbu, can be harvested along its coast. Tasty and reputed for supporting good health, seaweed has been part of people’s diets in Japan since ancient times.

The Japanese archipelago has the sixth longest coastline in the world, stretching 34,000 kilometers, and it is blessed with many fine areas where seaweed grows, boasting around 1,500 species. Some types of seaweed have been found at archaeological sites dating from the ancient Jōmon period, which lasted from around 16,500 years ago until 300 BC. Seaweed was once used for tax payments, and valued as medicine and offerings in Shintō rituals. It is even mentioned in poetry, including the famed Man’yōshū collection. Even now, konbu is used to make konbumaki, one of the auspicious dishes found in osechi ryōri Japanese New Year cuisine, as its name is similar to the word yorokobu, meaning “joy.”

Seaweed is rich in minerals like calcium, iodine, magnesium, and iron, along with dietary fiber. Some studies have shown that it reduces cholesterol levels, keeps blood sugar levels from rising, stimulates intestinal function, and boosts the metabolism. It has been used as a thickener or stabilizer for jelly and ice cream, and there is growing interest in its application to other fields apart from food, such as in medicine and cosmetics.

Popular Types of Seaweed in Japan

Konbu, or kelp, is said to have been used since the Jōmon period. It is an essential ingredient for making dashi soup stock and is a staple of Japanese cuisine. 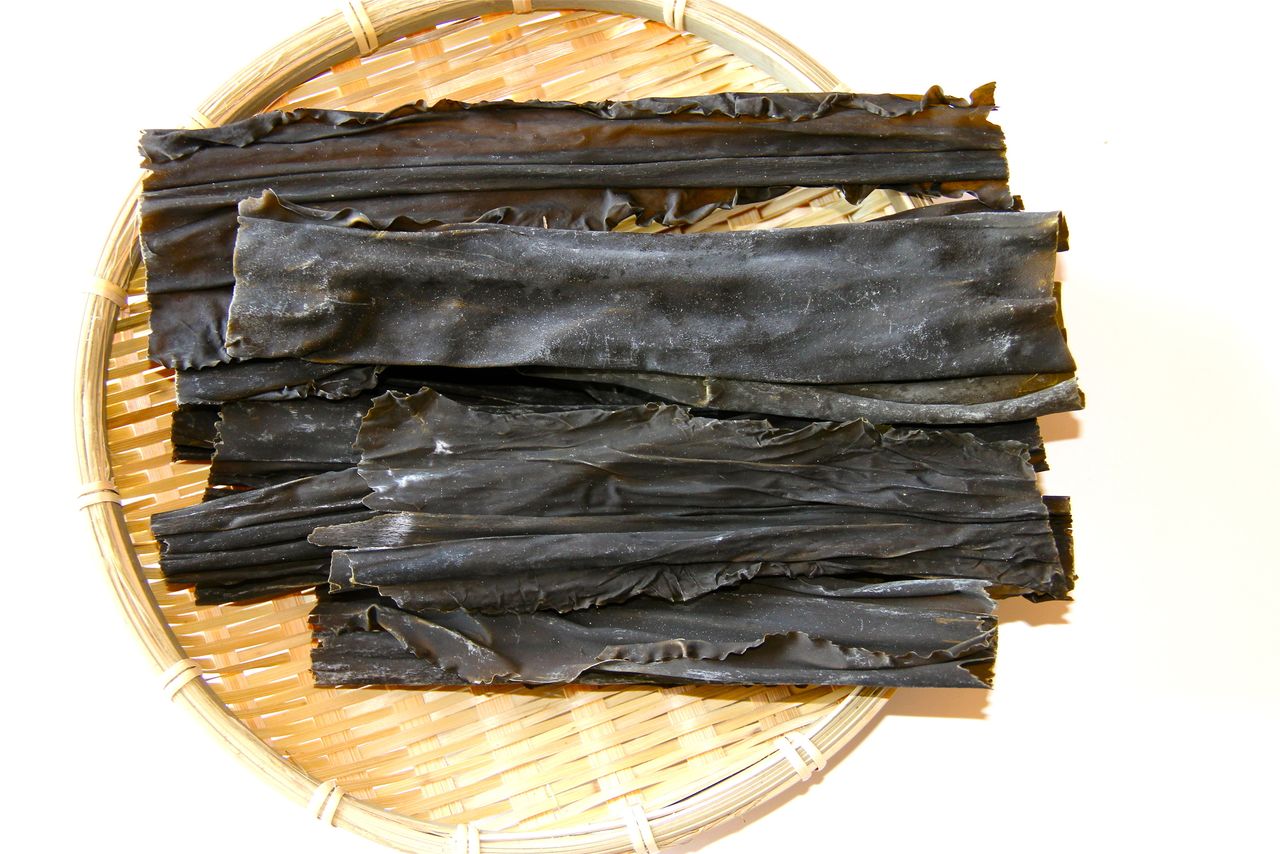 When looking at dried konbu, it is difficult to imagine what it actually looks like in the wild. Depending on the species, in some cases its leaf-like blades can grow to eight meters in length. Wild and farmed varieties are available, with Hokkaidō providing more than 90% of the former. Makonbu, rausukonbu, and rishirikonbu are mainly used for dashi, while hidakakonbu is used for nimono, dishes that are simmered in dashi. Konbu tsukudani (kelp simmered in salty-sweet sauce) is very popular as an onigiri rice ball filling. Konbu is dried and then stored in order to age it and thereby increase the umami flavor. 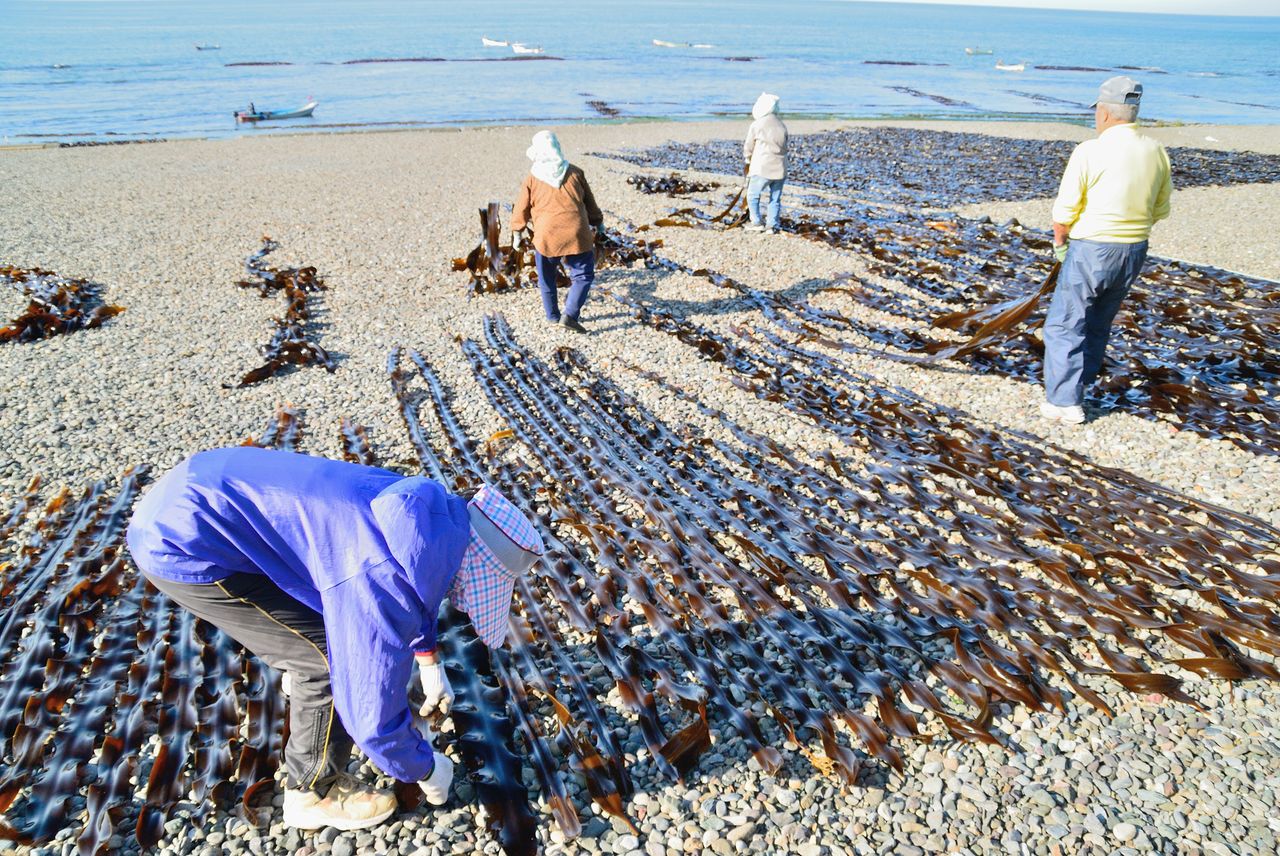 Drying konbu in the sun. (© Pixta)

Naturally presented monosodium glutamate is the basis for konbu’s umami flavor. It was identified in 1907 by Ikeda Kikunae, a professor at Tokyo Imperial University, and this led to umami-based flavor enhancers. Konbu contains a lot of minerals, vitamin B, and dietary fiber. Studies have shown that its soluble dietary fiber has a component that improves immunity to cancer. 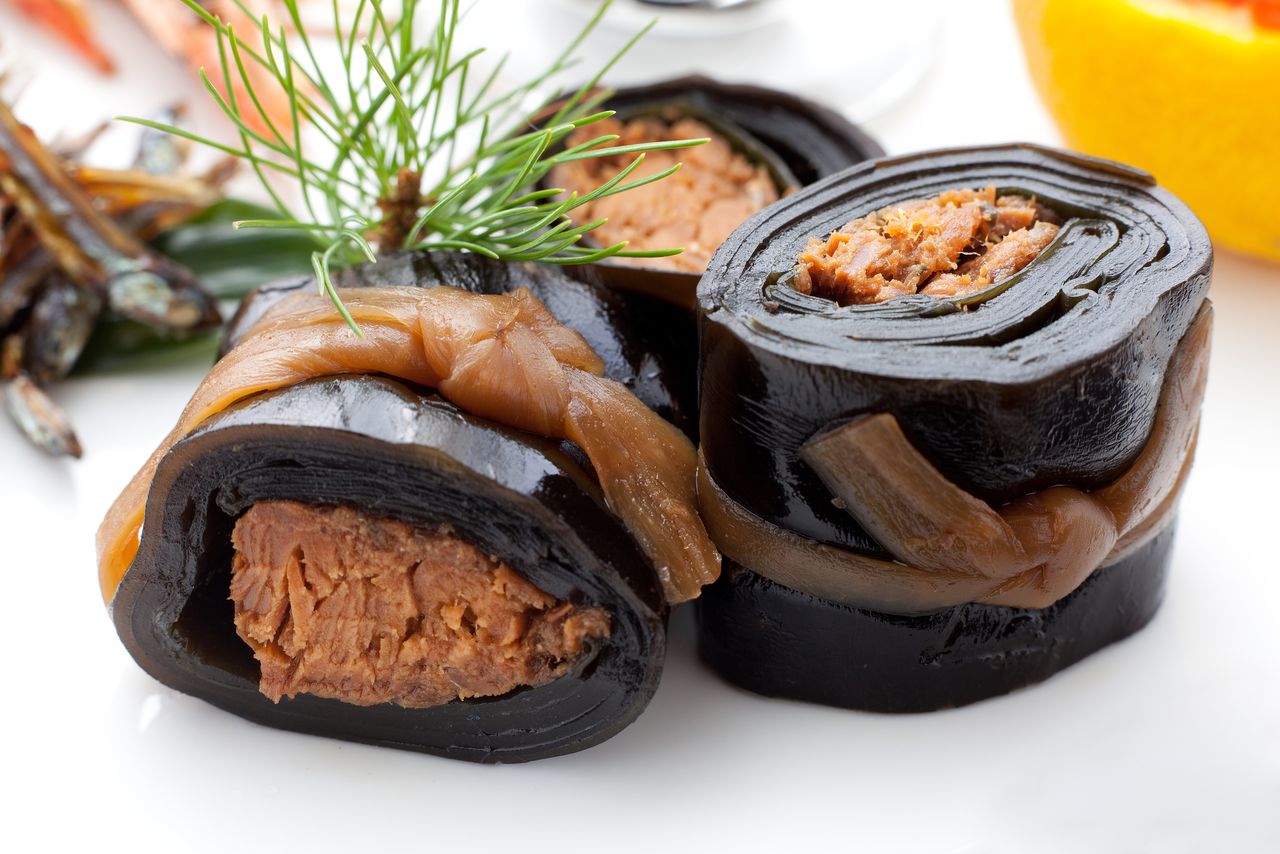 When put in hot water, the color of wakame changes within seconds from brown to jade. It grows up to one meter in length and becomes ready to harvest between spring and summer. Among the wakame harvested in Japan, 90% is farmed. 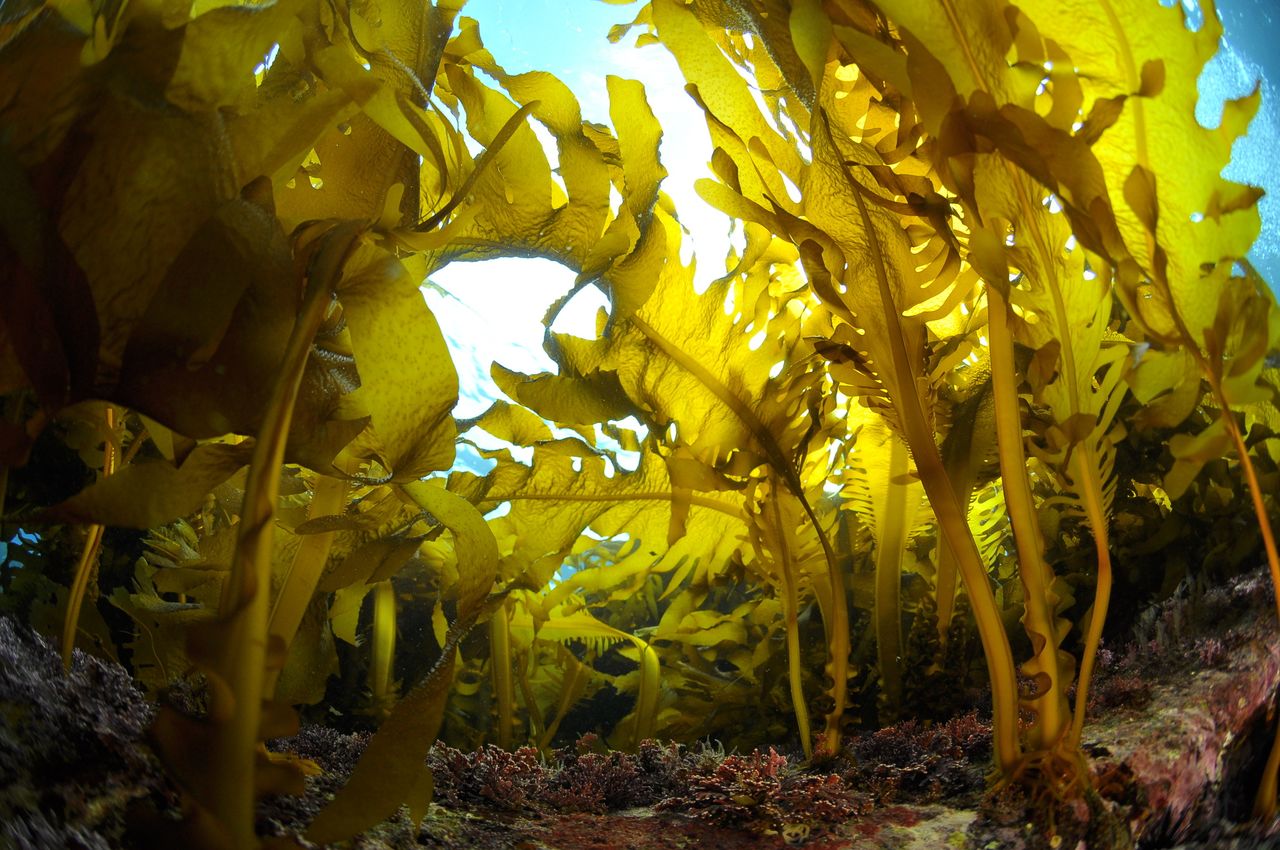 Wakame growing in the sea. (© Pixta)

Wakame is prepared in different ways depending on how it will be used, so it can come cut, dried, or salted with a chewy texture. It can be adapted to a wide variety of dishes, including miso soup and other types of soup, sunomono (vinegared food), salad, udon and soba noodles, ramen toppings, stir-fries, nimono, and tempura. 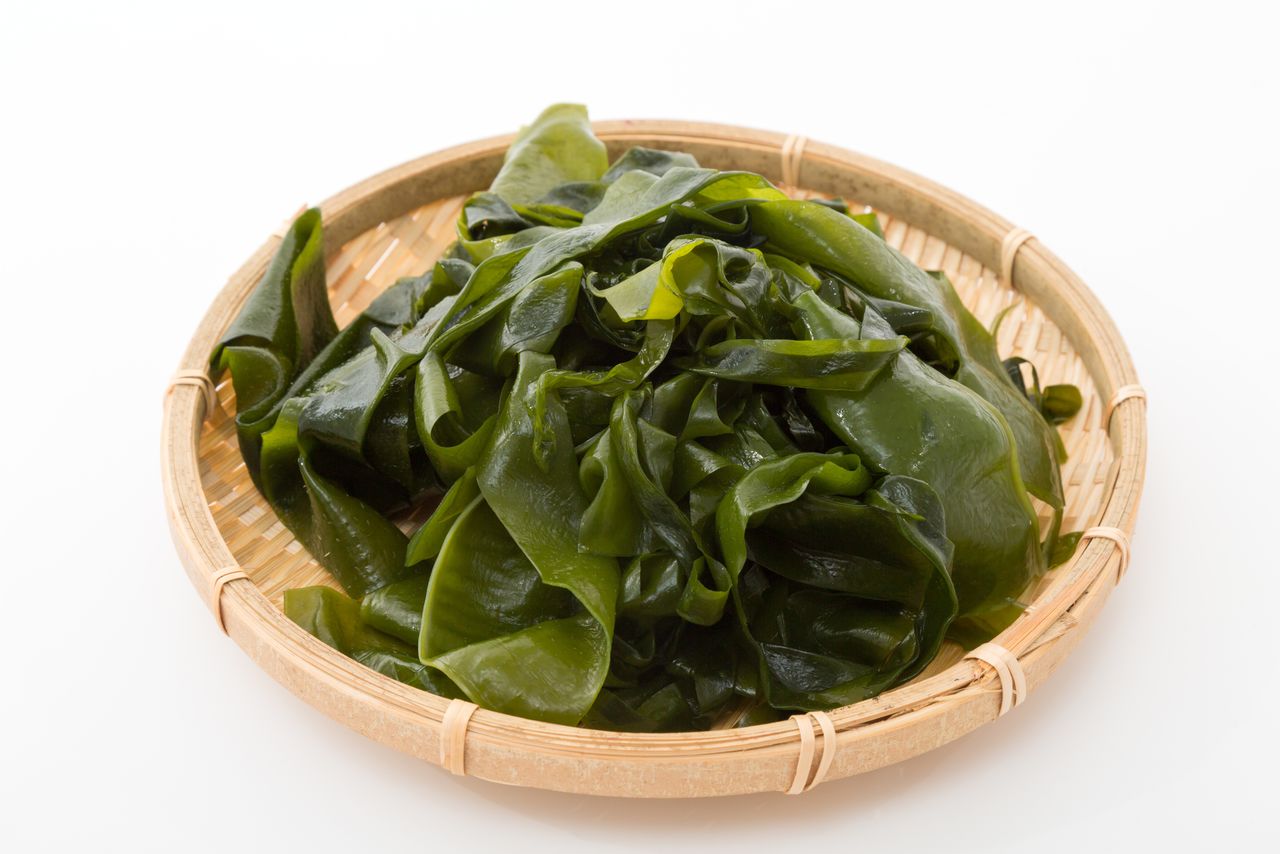 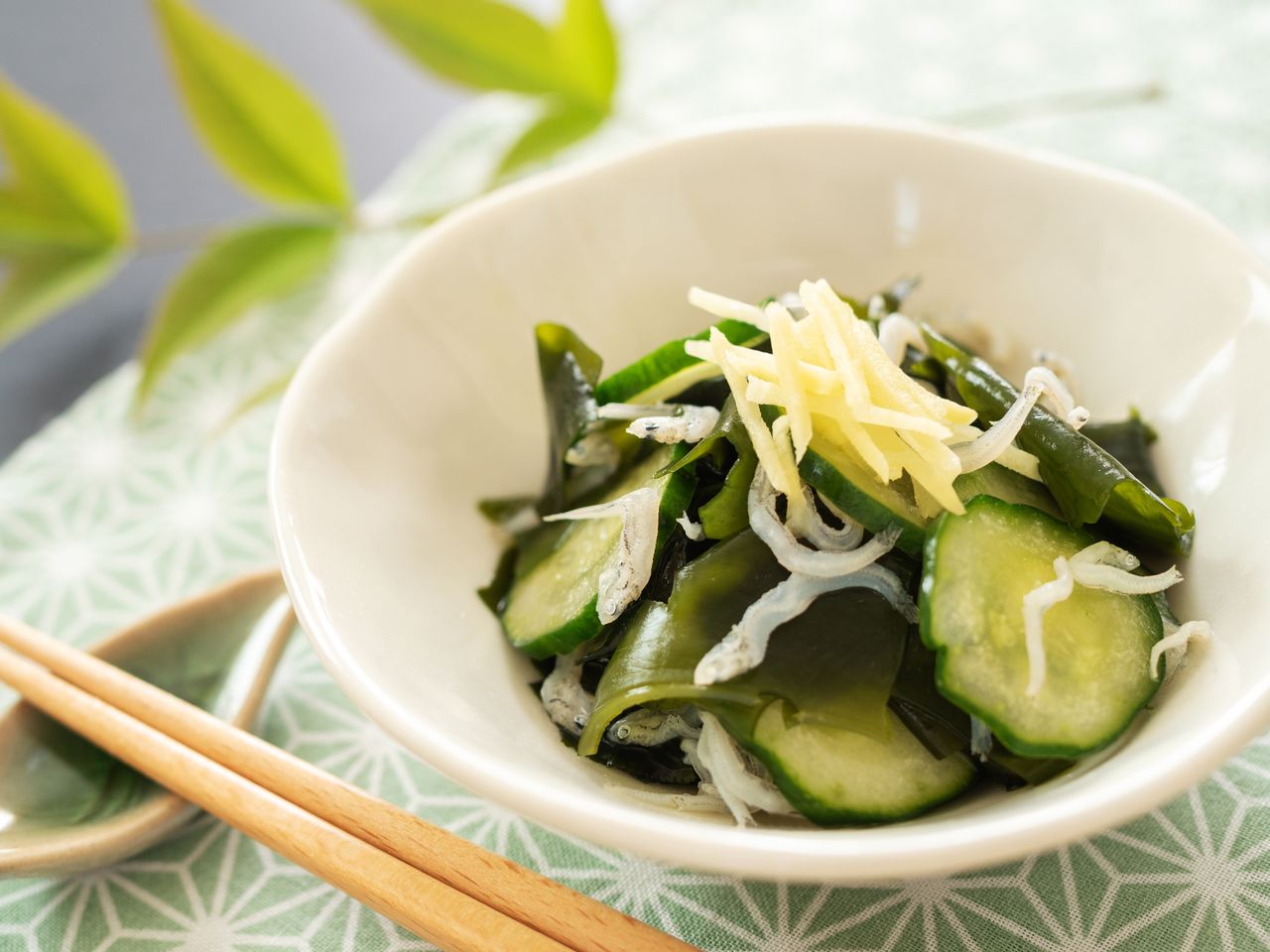 The flowering sprout at the base of wakame is called mekabu. Fresh mekabu, available only in spring in the shops, becomes slimy when cut, so adding it to aemono (dressed salads) or soup helps the food slip down easily, which is perfect in the summer months when the heat suppresses appetites. Mekabu has more soluble dietary fiber than wakame leaves and is said to improve cholesterol levels.

Mekabu (left), the flowering sprout of wakame, can be boiled, chopped, and served with ponzu soy sauce, garlic, and ginger (right). (© Pixta)

Hijiki is separated into two types: soft bud-like mehijiki, or the gathered leaves, and chewy nagahijiki, or the long stems. Both these types are available fresh or dried, but 90% of the hijiki sold in Japan is imported. Dried hijiki that has been rehydrated is usually cooked as nimono, and then fried in oil along with carrots, aburaage deep-fried tōfu, soybeans, and shiitake mushrooms before it is simmered in dashi, soy sauce, and sugar. 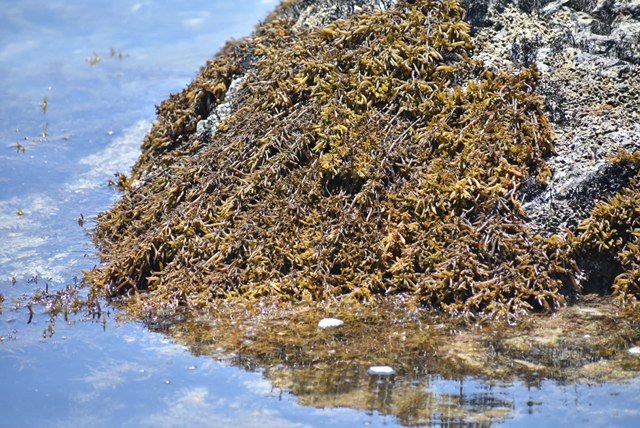 It can be used in a variety of dishes like rice dishes, salads, tamagoyaki (rolled omeleft), tempura, shiraae (mashed tōfu salad), sunomono, and miso soup. Hijiki provides a high amount of calcium, making it ideal for combating deficiencies. 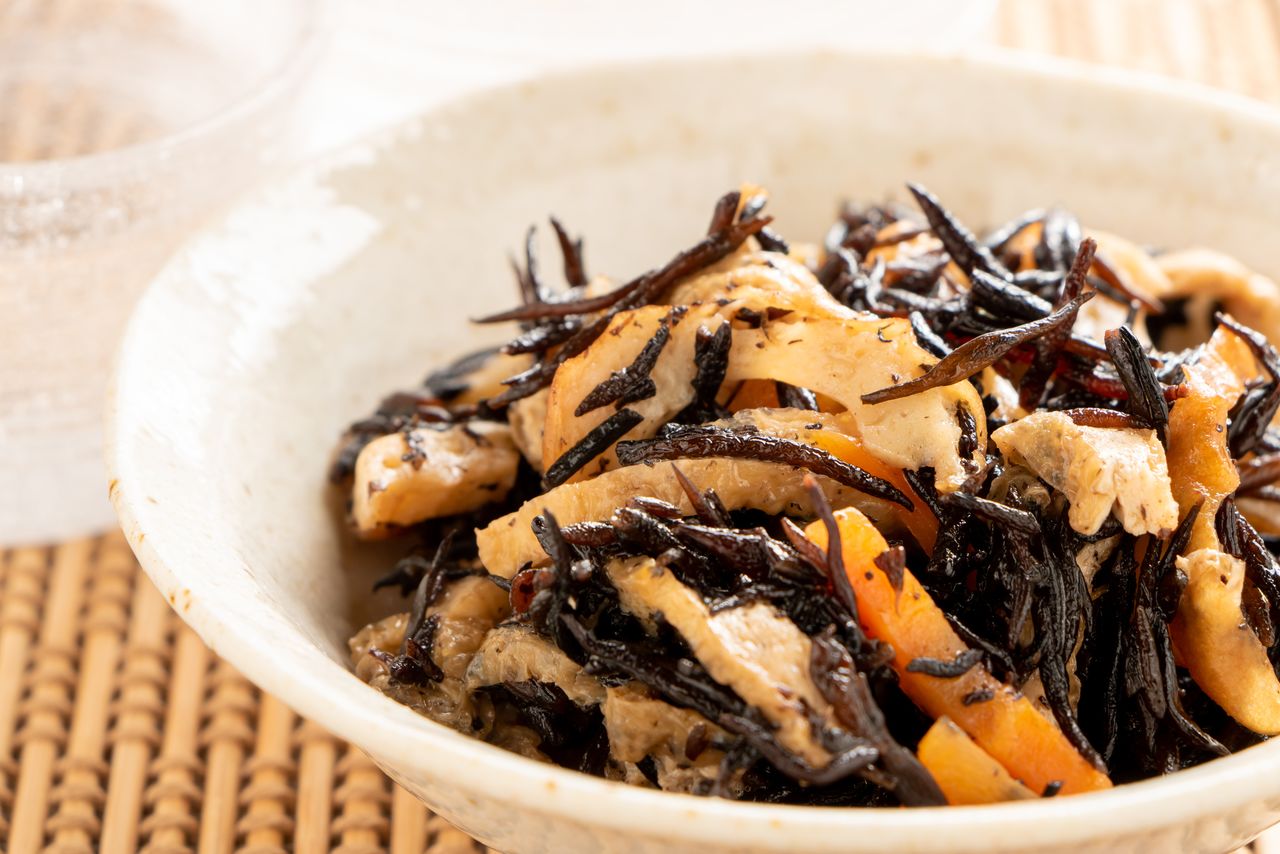 Approximately 90% of mozuku is farmed in Okinawa, and this variety has a chewy texture and is only slightly slimy. The mozuku that grows in the Hokuriku region is known as itomozuku and is much slimier with fine strands. Fucoidan, a type of dietary fiber present in mozuku is soluble, so it can be effectively ingested when added to miso or other types of soup. Eating it with vinegar and soy sauce also helps the body absorb its calcium more easily due to the citric acid in the vinegar. Vinegared mozuku is high in nutrition and its smooth texture makes it a refreshing side dish. 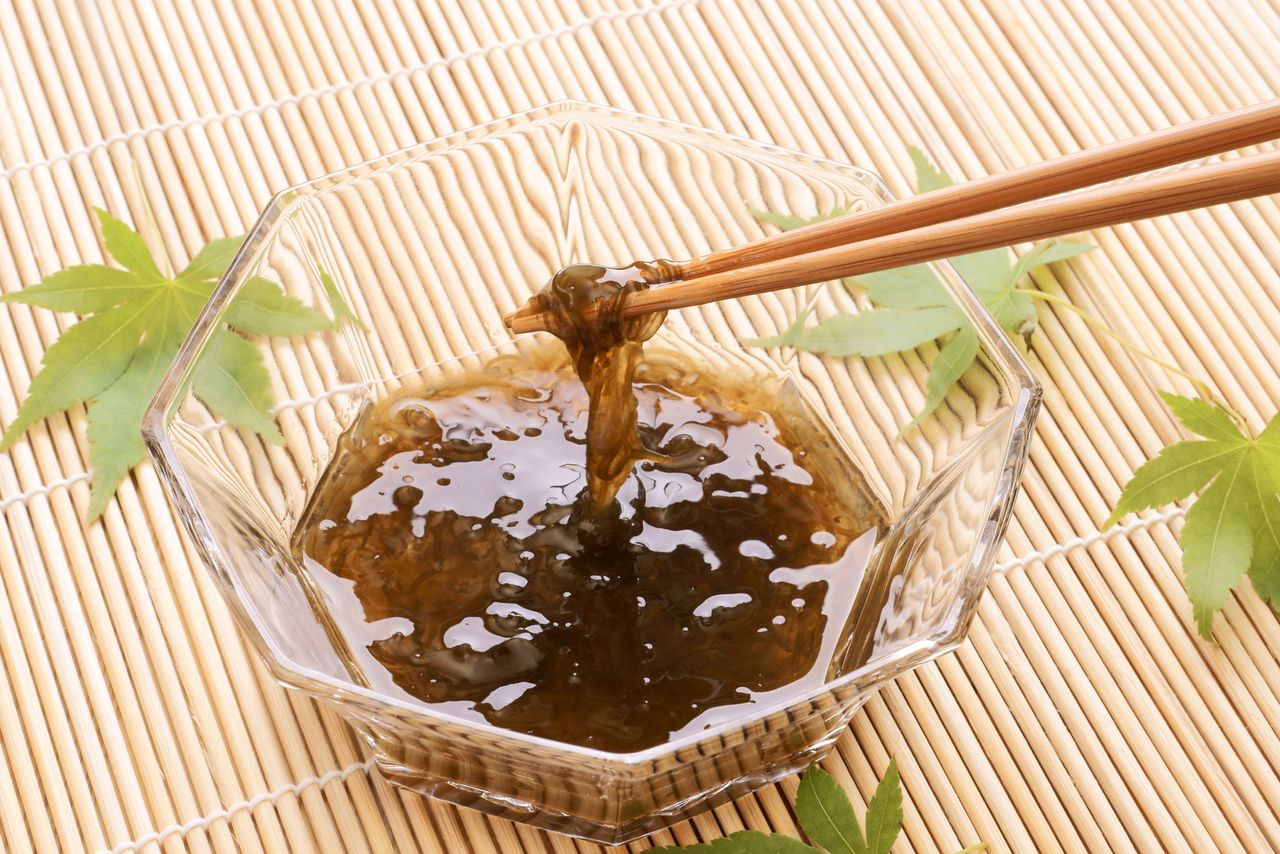 The main types of nori sold in Japan are susabinori and asakusanori. It comes in three forms, and is known as namanori is when it has been freshly taken from the sea, while the dried version is kannori and when grilled, it is known as yakinori. The nori sold in stores is usually yakinori. 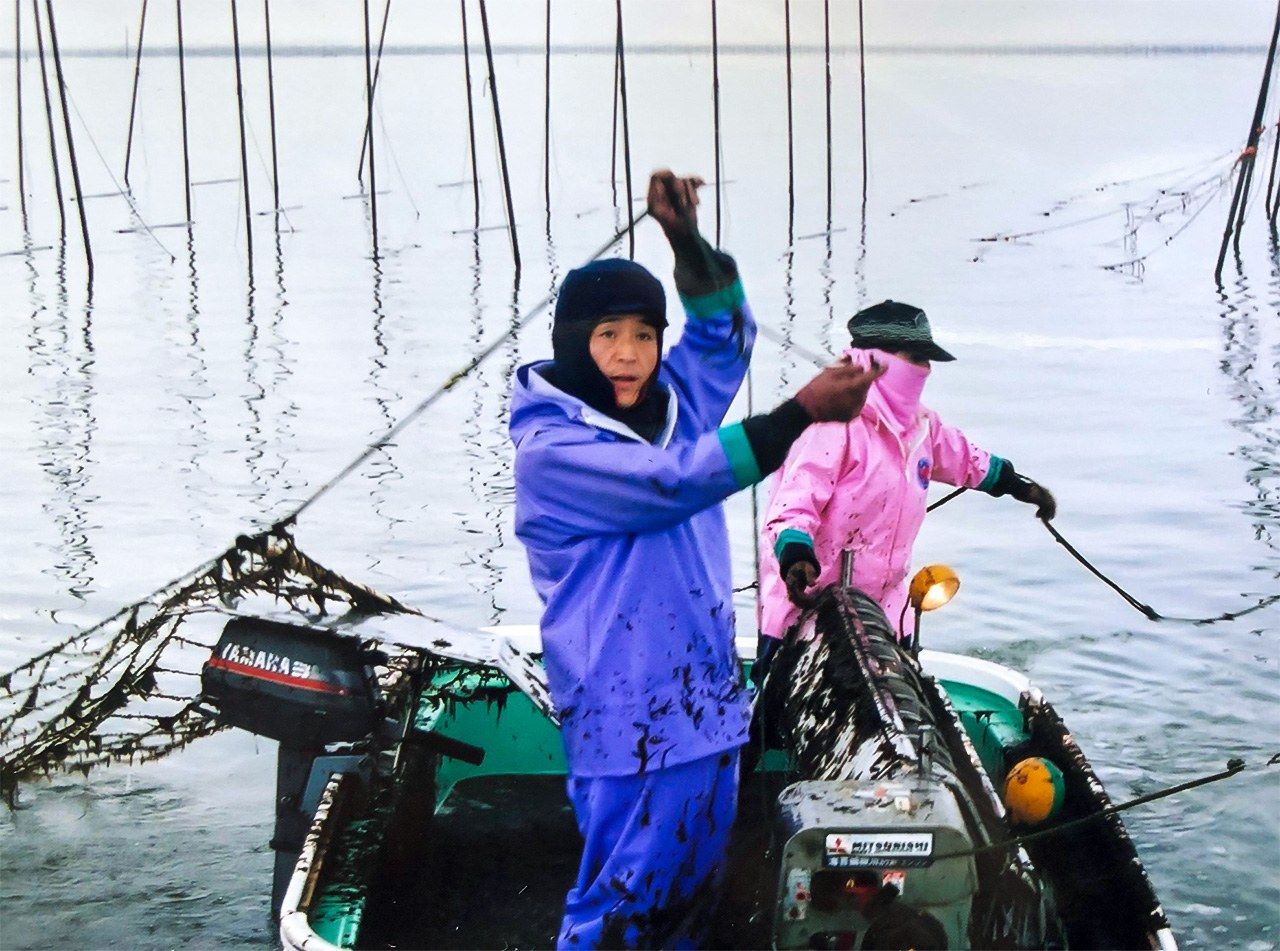 Nori farming on the Ariake Sea, in Northern Kyūshū.

To make the dried and grilled types, fresh nori is spread out thinly in sheets, like when making washi paper. Nori has many uses, including as wrapping for sushi, onigiri, and isobemochi grilled rice cakes, as an ingredient in furikake seasoning, and as a topping for zaru soba chilled noodles and ramen. Flavored nori, made of grilled nori cut into small pieces and coated with sauce, is a good accompaniment to rice. Around 30% of demand for nori is for home use, 10% is to give away as gifts, and 60% is for processing. The majority of processed nori is consumed in onigiri sold at convenience stores. Fresh nori is used as an ingredient in tsukudani and miso soup, and can even be added to pasta. It is called a “vegetable of the sea” and is rich in vitamin C, protein, and dietary fiber. 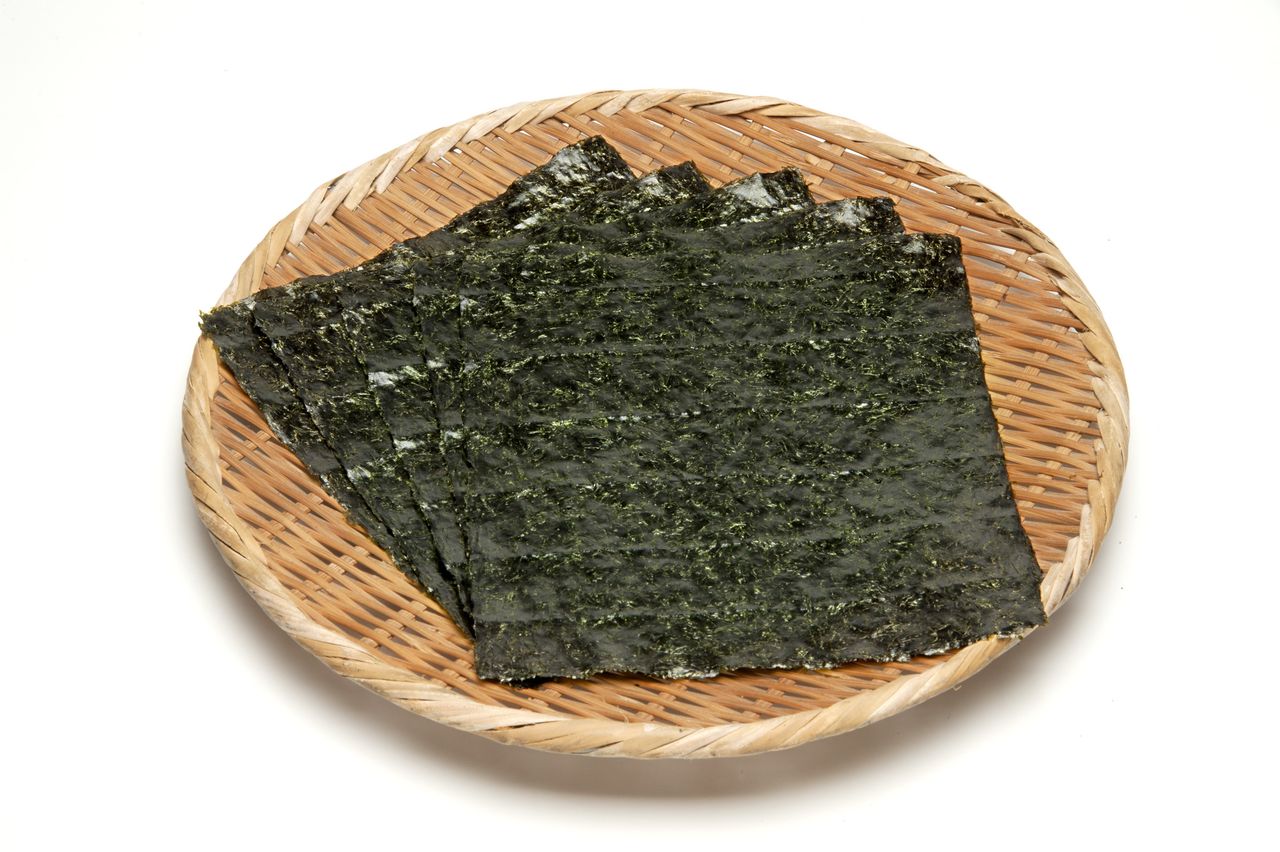 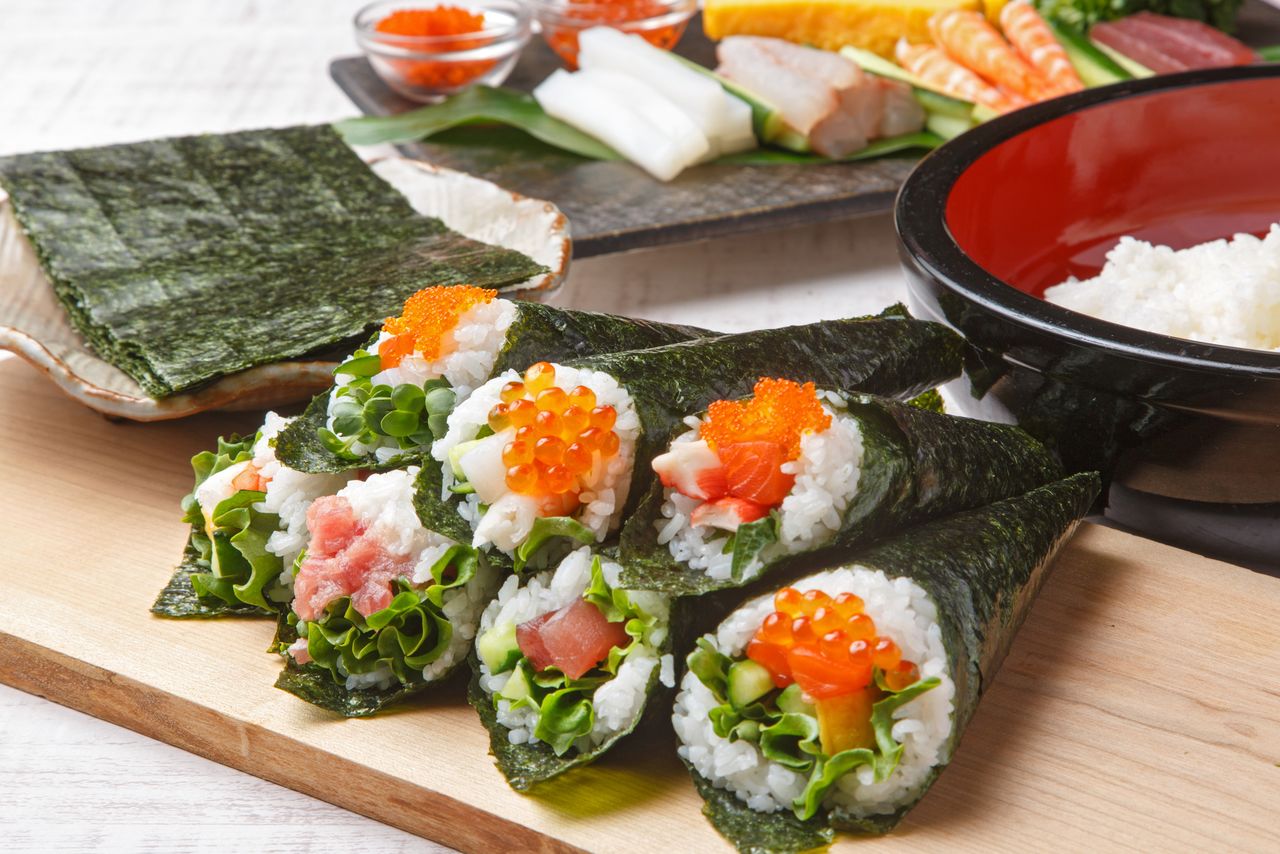 While aosa and aonori look very similar and are both classified in the same genus, aonori has a stronger aroma and goes well with dishes that use oil or butter, as well as being a good match for creamy ingredients. It is used with okonomiyaki (a pancake-like dish), yakisoba noodles, takoyaki (octopus dumplings), tempura, furikake seasoning on top of rice, miso soup, and pasta.

Before the introduction of animal-based collagen and gelatin in the Meiji era (1868–1912), tengusa was used for making Japanese sweets. To make kanten (agar) and tokoroten (agar noodles), the red algae are steeped in water and then repeatedly sun-dried four or five times so that they lose their color. They are soaked in water overnight and then simmered on high heat, followed by straining through a sieve to produce kanten. This has always been essential in making confectionery, but more recently it has also started being used in other ways too, including as a thickener in cosmetics and in food for the elderly. 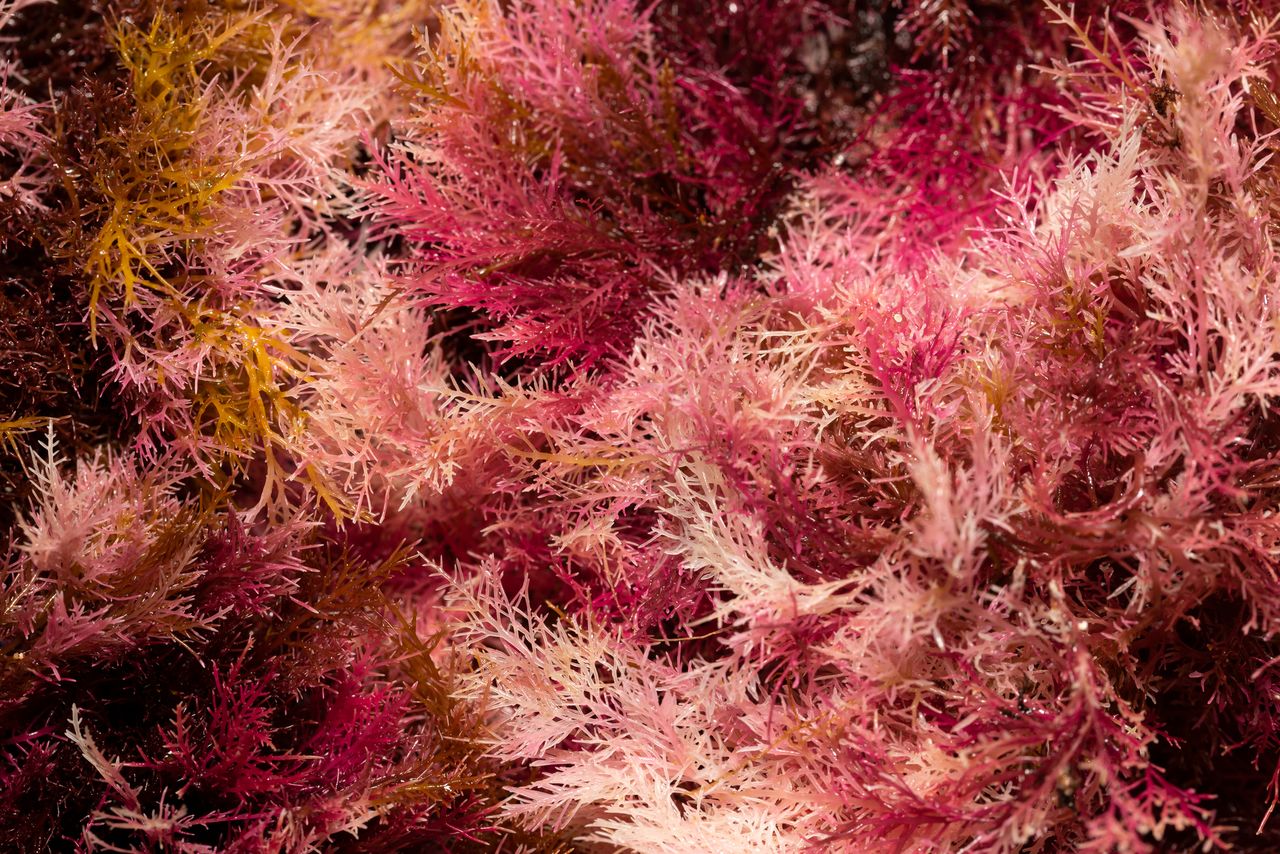 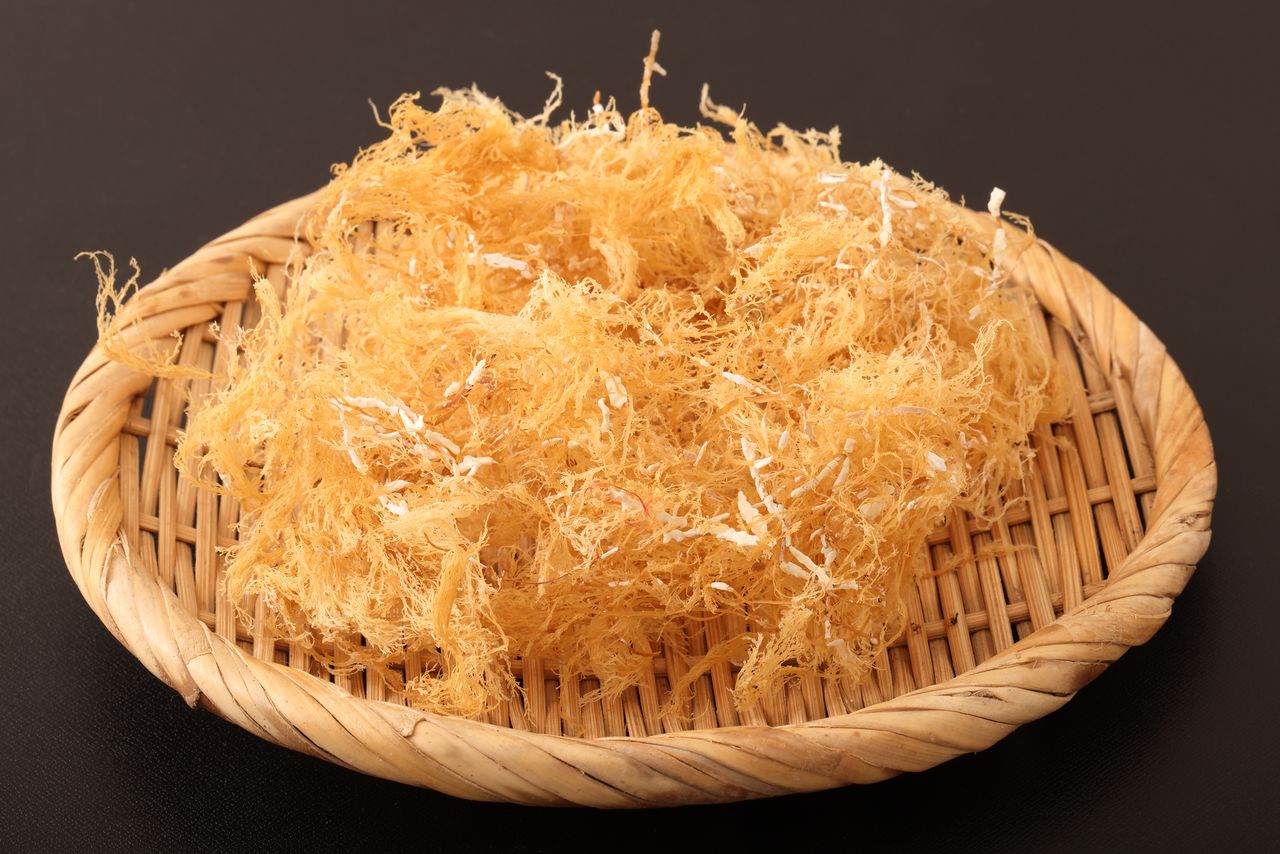 Tengusa that has been dried in the sun for several days. (© Pixta) 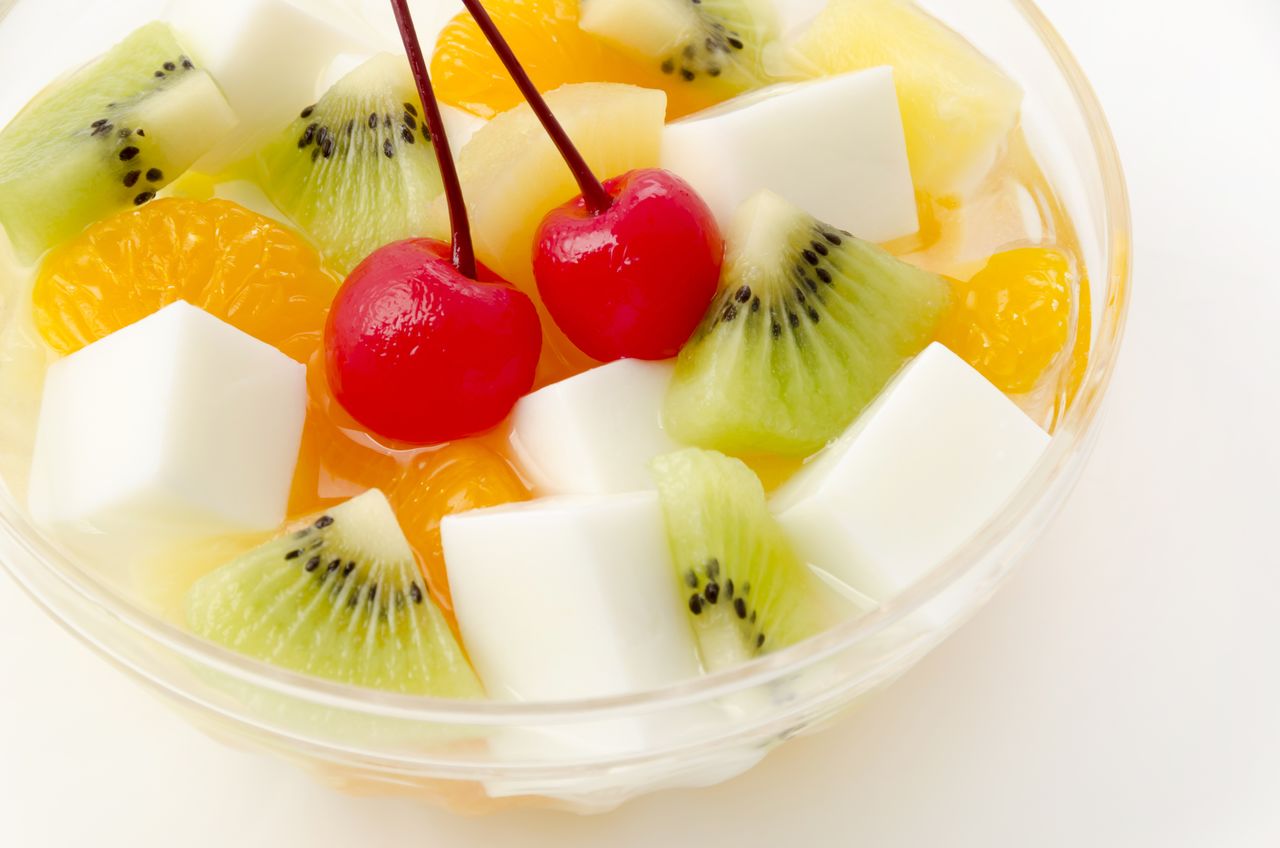 This red seaweed is used as a garnish for sashimi and in seaweed salad. It is called tosaka, meaning a chicken’s comb, due to its shape and red color. 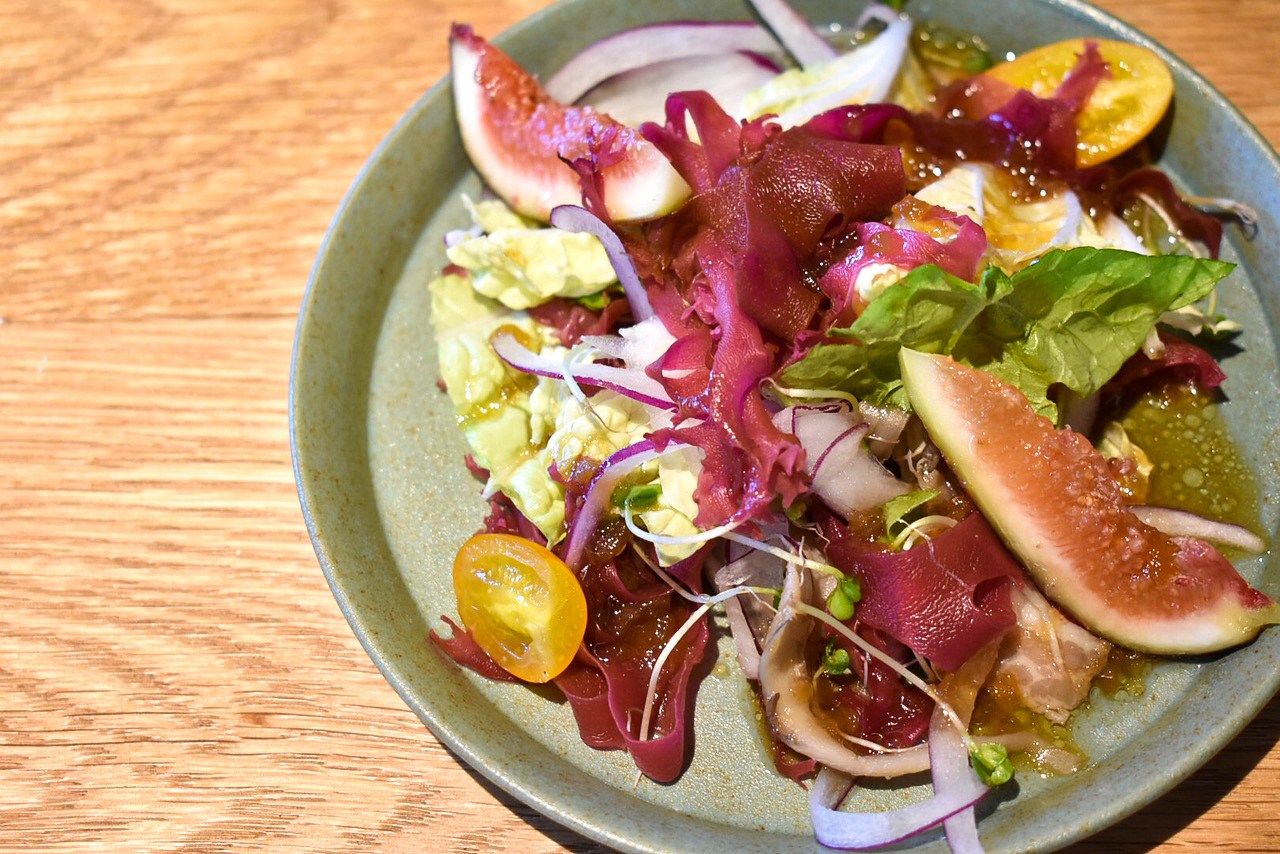