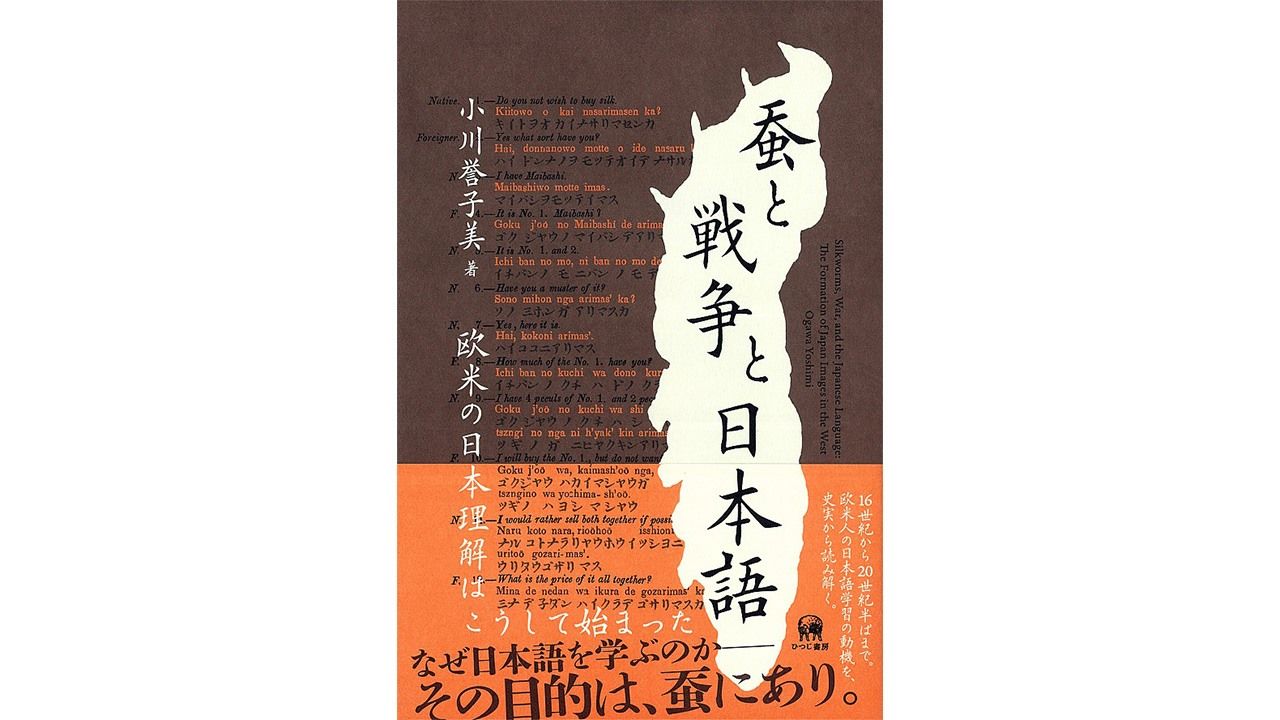 “Kaiko to Sensō to Nihongo” (Silkworms, War, and the Japanese Language) by Ogawa Yoshimi

Books Culture Politics Society Economy Jun 17, 2020
A book examines the history of the study of the Japanese language by Westerners, from when the first Portuguese and Spanish ships arrived on Japanese shores in the sixteenth century.

Kaiko to sensō to Nihongo: Ōbei no Nihon rikai wa kō shite hajimatta (Silkworms, War, and the Japanese Language: How the West Came to Understand Japan), written by the Japanese-language education specialist Ogawa Yoshimi, presents the history of how Western countries’ national interests have been bound up with the study and research of the Japanese language as they have cultivated specialists for their use in trade, diplomacy, and warfare.

The first encounters between Japan and Europe came in the mid-sixteenth century in the Age of Discovery. Portuguese and Spanish ships successively arrived on Japanese shores, leading to trade and missionary activities. Francis Xavier, a Spanish-born Jesuit, arrived in what is now Kagoshima Prefecture in 1549.

He is said to have decided to come to Japan after a meeting in Malacca (now in Malaysia) with a man called Anjirō from the Kagoshima area. Anjirō killed a man in his youth and escaped to Malacca on a Portuguese ship, so he was considerably fluent in Portuguese. His baptism in Goa is said to have made him the first Christian from Japan.

“To promulgate Christianity in Japan, Xavier wanted to win permission to perform missionary work from its leaders and to make Japanese translations of Christian texts,” explains Ogawa. “Japanese ability was essential to both, so training people who understood the language was an urgent task.”

Anjirō interpreted for Xavier when he went to Japan. The Spanish-born missionary Juan Fernández, who also accompanied Xavier, is said to have studied Japanese so hard he almost forgot to eat and sleep. He took over from Anjirō and remained in the country after Xavier left, compiling a Japanese grammar and a Portuguese-Japanese dictionary.

The Portuguese missionary Luís Fróis was a student of Fernández, and also knew Xavier and Anjirō. He arrived in Japan in 1563, later becoming friends with the powerful warlord Oda Nobunaga and meeting with Toyotomi Hideyoshi. Fróis had a talent for writing and is known for his history of Japan.

João Rodrigues was just 16 in 1577 when he came to Japan, where he worked as a missionary and interpreter. His writings include an extensive grammar of the language. Notes Ogawa: “The favor he won with Toyotomi Hideyoshi helped him become the procurator of the Jesuits’ Japan mission, while he was also involved with the raw silk trade as the representative of Tokugawa Ieyasu.”

Russia has a long history of Japanese study. The book describes how when overseas travel was greatly limited during the Edo period (1603–1868), castaways from Japan taught the language to Russians, with whom they worked together on teaching materials and dictionaries. From 1705, schools were established in Saint Petersburg and Irkutsk, and Japanese study continued intermittently for over a century.

“Russia’s first teacher of Japanese was a sailor called Denbei, who came ashore at Kamchatka after being shipwrecked during a 1696 journey from Osaka to Edo [now Tokyo].” He went to the capital Moscow in 1702 for an audience with Peter the Great, who ordered the establishment of Japanese schools. Denbei remained in Russia, converting to the Orthodox faith.

Another Japanese castaway, Daikokuya Kōdayū, managed to return home after spending several years in Russia. The merchant and ship’s captain was shipwrecked along with his crew during a 1782 voyage to Edo, landing at Amchitka in the Aleutian Islands. Eventually he won permission to go back to Japan from Catherine the Great in 1791. The expedition to take Kōdayū back allowed Russia a rare opportunity to see inside Japan.

In the early seventeenth century, the Netherlands and Britain joined Portugal and Spain in vying for Japanese trade. Wary of excess European influence, however, the Edo shogunate came to limit its trade with the continent to a Dutch mission at Dejima, Nagasaki, which became the country’s sole direct connection with the West for around two centuries.

The Dutch language was prized in Japan for its use in trade and access to Western knowledge. At the same time, Europeans like the German doctor Philipp Franz von Siebold could learn about Japan while stationed in Nagasaki.

As the book explains, there was also occasional practical interest in Japanese farther afield. “In the mid-nineteenth century, a hereditary silkworm disease called pébrine was rampant in Europe. It was incurable at the time and silkworms in Europe faced extinction. Japanese sericulture came under the spotlight as offering a possible solution, and a book on Japanese techniques for raising silkworms was translated into French and Italian in what must be the first example of a book-length technical translation from the language. Using this knowledge, the European silk industry was able to stave off crisis by raising Japanese silkworms with Japanese methods.”

The text in question, Yōsan hiroku (The Secrets of Sericulture), was written by Uegaki Morikuni and published in 1803. It was mixed in with the huge collection of Japan materials Siebold brought back from Nagasaki to the Netherlands. In 1848, it was translated into French by Johann Joseph Hoffmann, who was known as the only scholar of Japan in Europe.

Just before the enforced opening up of Japan set into motion by the 1853 arrival of a US Navy expedition led by Commodore Matthew Perry, the Western powers threw their energies into training students in the Japanese language, aiming to have them apply their new proficiency in negotiations. Around this time, Japan’s focus switched from Dutch to English, with scholars like Fukuzawa Yukichi recognizing the greater importance of the latter language for future learning.

Perry wrote in the Narrative of the Expedition of an American Squadron to the China Seas and Japan: “Much progress will . . . never be obtained toward a thorough knowledge of Japan, until some of our men of intelligence are established in the country in the character of consular agents, merchants, or missionaries, who may thus be enabled to acquire the language, and mingle in intimate social relations with the people.”

In 1859, not long after the opening of Japanese ports, the United States sent six missionaries to the country. They included James Curtis Hepburn, who gave his name to the now standard Hepburn system of romanizing Japanese. “Hepburn came to Japan to spread the gospel, became involved in medical activities, opened a private school, contributed to a Japanese translation of the Bible, and published a Japanese-English dictionary during 40 years living in the country,” explains Ogawa.

The author also describes how Britain showed a “threatening and high-handed attitude” in insisting that its own treaty negotiations be conducted in English rather than Dutch. At the same time, it sent many interpreters and Japan specialists to the country.

Most famously, these included Ernest Satow, who arrived in Japan in 1862 at the age of 19 as a student interpreter. He became a skilled diplomat, proficient in Japanese, who came to know many of the leading figures in government, was able to acquire useful information, and was himself influential.

In 1902, Japan entered an alliance with Britain, which led to the launch of Japanese classes at the University of London and Oxford University, as well as new Japanese-language schools and textbooks. Later, a new alliance with Germany and Italy in the 1930s would boost study in those countries.

After the Russo-Japanese War of 1904–5, interest in Japanese grew in Eastern Europe. There were also a number of Russians who went on to become distinguished in Japan studies. One notable example was Nikolai Nevsky, who traveled to Japan to study in 1915. His linguistic ability led him to study not only Japanese but also Ainu, the Miyakoan language of Okinawa, and the Tsou language of Taiwan.

Nevsky returned to what was now the Soviet Union in 1929, but became a victim of Stalin’s Great Purge in 1937. He was accused of being a spy and executed together with his Japanese wife. They were posthumously rehabilitated in 1957, and in 1962 he was awarded the Lenin Prize.

The needs of World War II fostered an unprecedented level of Japanese study among the Allied powers. Ogawa suggests that Japan may have been complacent in a belief that its language was so difficult that there was no way foreigners could understand it.

Starting in 1941, the US Navy and Army established special programs to train talented linguists for tasks like interpreting bugged conversations, deciphering codes, conducting propaganda activities, interrogating prisoners, and reading military documents. In Britain, the School of Oriental and African Studies in London had its own scholarship courses from 1942, and there was also a secret school in Bedford instigated by the code-breaking center Bletchley Park.

Among the graduates from the US Navy course were Edward Seidensticker and Donald Keene, who through their postwar translation activities were central to the enhanced global standing of Japanese literature. Seidensticker’s translations of works by Kawabata Yasunari opened the path to the latter winning the 1968 Nobel Prize in Literature. British counterparts who applied their wartime training in Japanese to later careers include the diplomat Hugh Cortazzi and the sociologist Ronald Dore.

Japanese is still considered a difficult language by many. The Foreign Service Institute at the US Department of State includes Japanese in one of its handful of Category IV super-hard languages, “which are exceptionally difficult for native English speakers.”

Even so, and despite advances in automatic translation, more people are studying Japanese around the world. A Japan Foundation survey every conducted three years found in fiscal 2018 that Japanese education was being conducted in 142 countries and regions with 3.8 million learners, up 5.2% from fiscal 2015. Incidentally, this total has increased by more than 30 times from the 1979 figure. China has the most learners, followed by Indonesia and South Korea, but there are also many in the English-speaking world, with Australia coming in fourth and the United States eighth.

There are said to be more than 7,000 languages in the world. In her book, the author stresses the special position of Japanese, with sufficient popularity for there to be schools across the globe and for people to make careers as teachers. While English has become increasingly dominant, such demand shows that the Japanese language is far from finished. 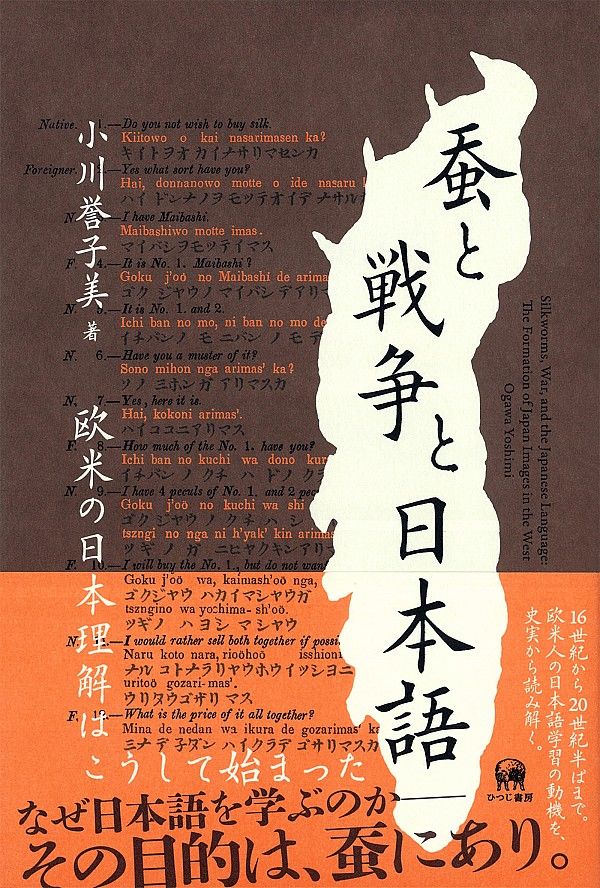 Kaiko to sensō to Nihongo: Ōbei no Nihon rikai wa kō shite hajimatta (Silkworms, War, and the Japanese Language: How the West Came to Understand Japan)