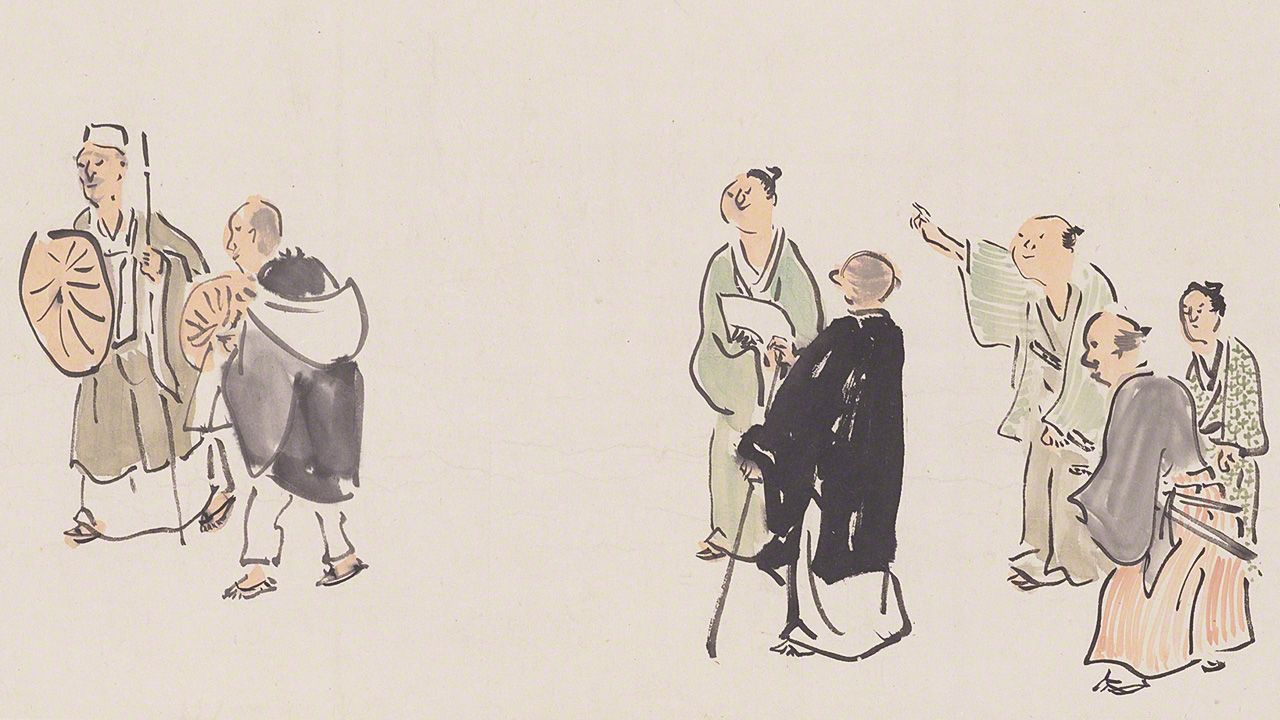 “The Narrow Road Through the Hinterlands”: Walking with Bashō on a Journey of Invention

Culture Jun 9, 2022
Matsuo Bashō’s masterpiece The Narrow Road Through the Hinterlands is a travel journal based on a five-month, 24,000-kilometer trek across Japan. The classic work, however, incorporates much literary invention, influenced by the writings of the past.

Almost a Work of Fiction

Matsuo Bashō was around 45 in May 1689 when he began the five-month journey across Japan that inspired the most famous of his travel journals: Oku no hosomichi (trans. by Steven D. Carter as The Narrow Road Through the Hinterlands). From his home in Fukagawa, Edo (now Tokyo), he traveled north to Hiraizumi in what is now Iwate Prefecture, then west and down the Sea of Japan coast, before finishing his trek at Ōgaki in what is now Gifu Prefecture. 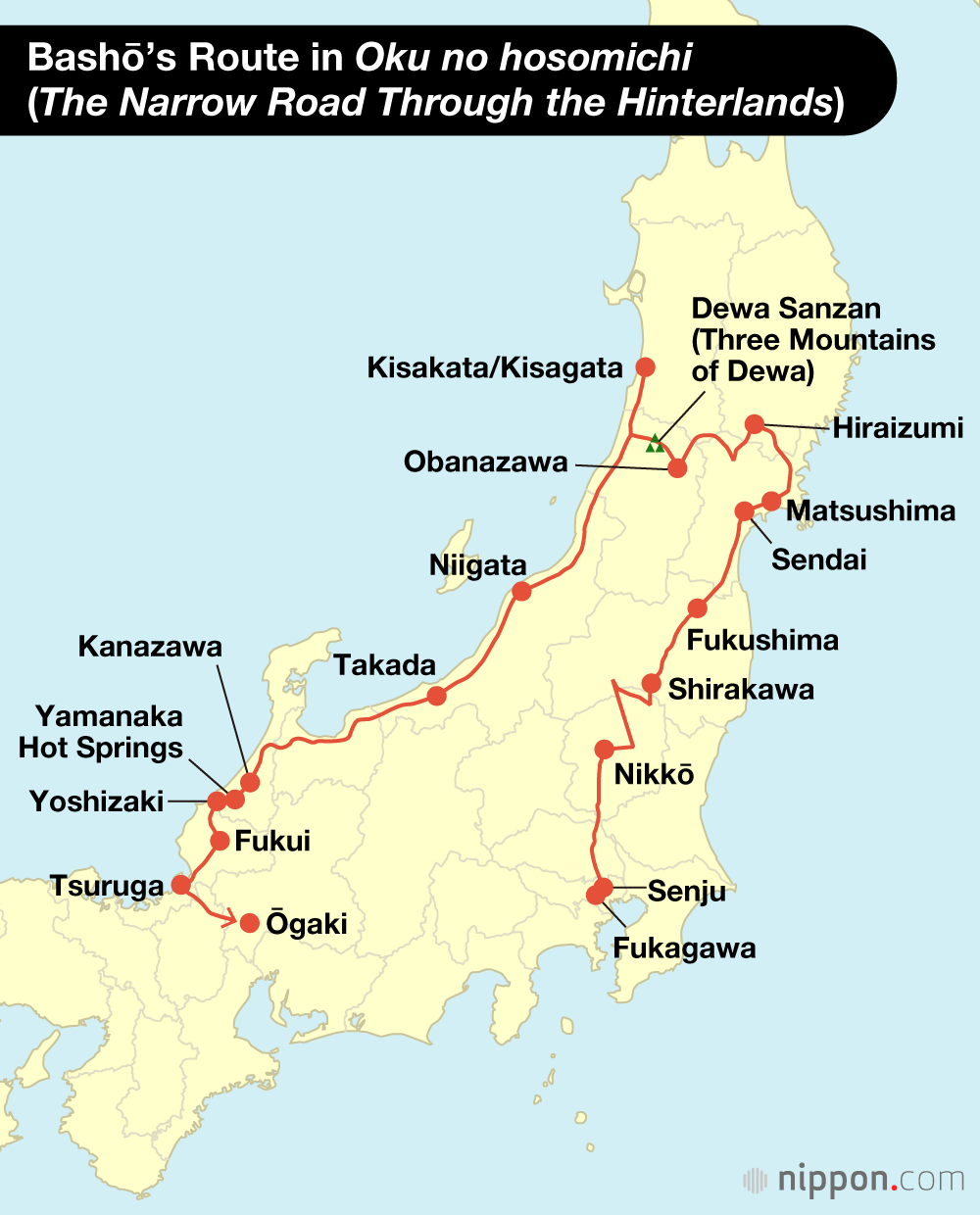 For most of the trip, as far as Yamanaka Hot Springs, Bashō was accompanied by his disciple, known in the text as Kawai Sora (although the scholar Muramatsu Tomotsugu has shown his real name was Kasai Sora). He also traveled with the haiku poet Tachibana Hokushi from Kanazawa to just before Fukui. As well as visiting historic spots known for poetic associations or past battles, he wanted to meet poets, create linked verse together, and convey his version of haikai, the light, humorous literary genre that he played such a great part in shaping. Another motive was likely to have been that it was the five hundredth year since the death of Saigyō, a literary forebear Bashō much admired, who had similarly journeyed to Hiraizumi. There are frequent moments in the text where one can sense Bashō is deeply conscious of the earlier writer. He is believed to have edited the work into its final form from 1692, three years after the journey, to 1694, the year of his death.

From Sora’s diary, which gives an account of what took place on the expedition, it is apparent that The Narrow Road Through the Hinterlands contains much description that is different from what actually happened. While Bashō based his literary travel journal on the real journey, he incorporated many of his own original ideas. One might call it almost a work of fiction, and in this sense, it holds a distinctive place among Japan’s classic travel literature. Broadly, it makes use of the following three approaches.

The journey takes place from the end of spring to the end of autumn, and the work is highly focused on the seasonal transitions and annual observances during this time. The narrator is also frequently moved by realizing the passage of time when viewing items, sites, or customs connected to the distant past.

2. Use of Concepts from Nō Drama

There is a form of nō called the mugen-nō (dream play) in which the shite or main character is a ghost appearing in the dream of the waki or supporting character. There are parts in The Narrow Road Through the Hinterlands where one senses the influence of dialogues with people no longer of this world.

3. The Traveler as a Follower of Saigyō

While the work has a first-person narrator, it is not stated that this is Bashō himself. Bashō molds the narrator as an admirer of Saigyō, who follows the earlier poet’s actions.

Yosa Buson, Oku no hosomichi-zu byōbu, 1779. Buson created this folding screen with the text of The Narrow Road Through the Hinterlands and pictures of its various episodes out of his esteem for Bashō. (Courtesy Yamagata Museum of Art, Hasegawa Collection)

I will begin by considering the work’s opening.

The months and days are travelers through the ages, and so too are the years that come and go. For boatmen who spend their lives on the water and drivers who grow old leading their horses, every day is journeying, and journeying is their home. Many of the ancients died on the road, and I too, for some years, have been drawn to follow the wind like a wisp of cloud, unable to contain my wanderlust. I roamed along the coast . . .

There is a clear focus on time, as a concept likened to travelers, and more specifically as the traveling companion of the narrator. This “I” will go on to make note of the beginning of summer and autumn, as well as specific calendar festivals, including Tango no Sekku, Tanabata, Obon, and the night of the mid-autumn moon. He also views heirlooms left by Minamoto no Yoshitsune and his servant Benkei—who were driven north to Hiraizumi by the former’s half-brother Yoritomo, the founder of the Kamakura shōgunate—and goes to historic spots like the Konjikidō hall at the temple Chūsonji in Hiraizumi. Such connections to the past move him to tears.

Next, I would like to look at the section in Takadachi, Hiraizumi, the battlefield where Yoshitsune and his followers were defeated. Incidentally, Saigyō journeyed to Hiraizumi while Yoshitsune was sheltering there.

Yoshitsune’s retainers made their stand here and won glory in combat, but the moment passed, and their glory turned to grass. “The state in ruins, mountains and rivers remain. Spring green grows on the fortress.” Setting down my hat, I forgot the passing of time, and wept.

This section shows a strong influence from the mugen-nō. It is written so that it could be read that the narrator forgets the passing of time in lamenting the past battle where Yoshitsune and his retainers were defeated. In that time, the warriors appear in his dream to recount the events of the battle to him, and when he wakes, all that remains are the summer grasses.

The passage also suggest that it was in a dream that Sora saw the white hair of the warrior Kanefusa from the losing army. Sora’s real-life diary does not include the haiku, which seems to have actually been Bashō’s later invention. In nō terms, if the narrator is the waki (supporting character), Sora is the wakitsure (supporting character’s companion), and both offer poems to those who fell in battle.

The following passage, describing Bashō’s arrival in what is now Fukui Prefecture, is a good example of how the narrator is presented as a follower of Saigyō.

We crossed the border into Echizen, and over the Yoshizaki Inlet by boat, visiting the Shiogoshi Pines.

This one poem conveys the place’s beauties in all its forms. To add anything would be like putting a sixth finger on a hand.

The poem here is, in fact, the work of another writer called Rennyo, and the idea that Saigyō wrote it is Bashō’s invention. Rennyo was a major Buddhist figure, and the moon symbolizes enlightenment. Thus, Bashō uses this poem in The Narrow Road Through the Hinterlands to show, through the moon, Saigyō’s accomplishment of Buddhist training, as well as the narrator’s desire to praise him.

Various versions of the text were produced before Bashō’s death in 1694. His handwritten manuscript is known as the Nakao version after its 1996 discoverer. The Sora version—so called as it was passed down through Sora’s family—is a faithful copy, which was further revised and polished. The Nishimura version, named after its owner, is a copy of the Sora version made by the calligrapher Kashiwagi Soryū at Bashō’s request, while another copy made by him is called the Kakimori version, as it is owned by Kakimori Bunko.

All of these are handwritten. Bashō apparently showed no intention to publish The Narrow Road Through the Hinterlands. What does it mean that he only left handwritten manuscripts? One reason may be the comparative value of rarity, which would be lost through printing many copies. There are many ways to interpret the situation, but I would suggest that Bashō saw the text as a work in progress, which he intended to further refine.

In the year of his death, Bashō took the Nishimura version back to his hometown in Iga Province (now Mie Prefecture), where he presented it to his older brother Matsuo Hanzaemon. It then passed to Bashō’s disciple Mukai Kyorai, and this version was published by Izutsuya in Kyoto in 1702. This was the basis for numerous later reprintings. It was long considered the only version, until various manuscripts were discovered in the twentieth century. The original Nishimura version was found in 1943, the Sora version in 1951, the Kakimori version in 1959, and the Nakao version in 1996. It was in 1943 that Sora’s diary emerged to give an alternate version of events. These discoveries have given fresh impetus to studies of Bashō’s classic.