Society Dec 3, 2018
At a Tokyo ceremony held on December 3, the publisher Jiyū Kokumin Sha announced its 10 finalists for “Words of the Year,” along with the grand prize winner: So da nē, a phrase that won public favor and fame when the national women’s curling squad used it to encourage one another—“Yeah, that’s it!”—at the Pyeongchang Olympics in February.

Each year in the late fall, the editors of Gendai yōgo no kiso chishiki (Basic Knowledge on Contemporary Terminology) join a nomination committee to select a list of terms that best encapsulate the year that was. We brought you explanations of the full list of 30 nominees last month; today, at a ceremony at Tokyo’s Imperial Hotel, the 10 finalists were announced, along with a single grand-prize winner: So da nē, a phrase meaning “Yeah, that’s it!” that was commonly heard from Japan’s Olympic curlers at the Winter Games in Pyeongchang, South Korea, this February.

The world of sports, broadly defined, provided 4 of the 10 finalists this year. Joining the words of curling encouragement were the Japanese for “esports,” professional-level video gaming competitions; a phrase of amazement at the field exploits of soccer star Ōsako Yūya; and Nara hantei, the “Nara decisions” that went to pugilists from Nara Prefecture in boxing matches whose outcomes were prearranged by Yamane Akira, the crooked chief of Japan’s amateur boxing organization. As selection committee member and actress Muroi Shigeru noted, this was perhaps not surprising in a year that saw the Pyeongchang Games, the FIFA World Cup finals, and the hundredth Kōshien high-school baseball tournament.

On hand to accept the prize for the winning phrase was Motohashi Mari, a three-time Olympian curler for Japan who helped bring home the bronze in the women’s competition this year. The award ceremony each year sees participation from people proud of the role their words played in shaping the Japanese consciousness during the year, along with entertainers eager for a bit more time in the spotlight. One of the biggest entertainers of 2018, certainly the one with the biggest head, was Chiko-chan, a “five-year-old girl” with computer-generated features appearing on a popular NHK variety program, whose trademark phrase—Bōtto ikiten ja nē yo!—was heard everywhere from playgrounds to company offices as the Japanese urged each other to “Stop living your life like a total space case!” 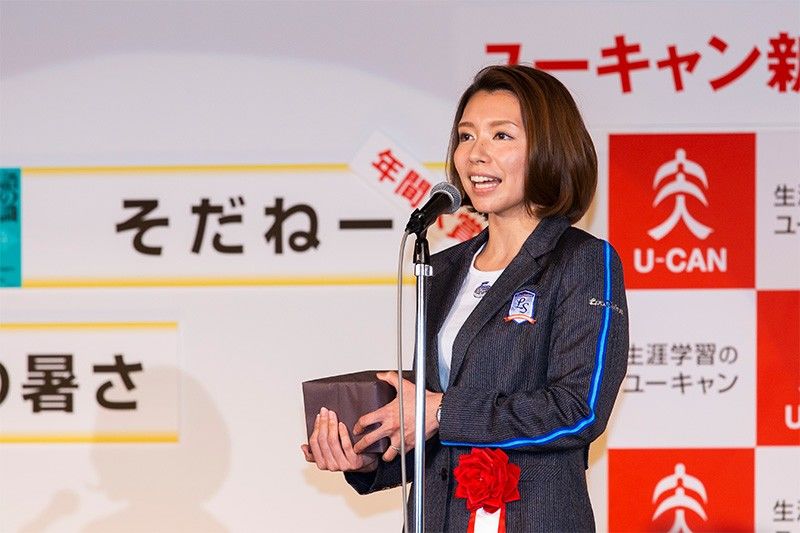 Motohashi Mari accepts the prize for this year's winning phrase and expresses her hope that curling's popularity will continue to grow.

Members of the selection committee had various takes on the terms that came to represent 2018. In a year marked by fake news and venomous language in the public sphere, noted University of Tokyo Professor Emeritus Kang Sang-jung, many seemed to welcome the arrival of phrases conveying genuine human warmth and concern. The linguist Kindaichi Hideho, too, noted the warmth of the Hokkaidō-accented so da nē utterance, holding it up as an example of a hit phrase emerging from genuine, ordinary conversation rather than something manufactured as an all-new term.

The manga artist Yaku Mitsuru said that while this year’s crop may have lacked the impact of the words of 2013, when there were four top terms selected, this year had nonetheless provided numerous candidates that left a strong impression on him. He also hinted at a potential problem in the timing of the award process, which misses out on words that arrive in the popular consciousness late in the year—notably 卒婚 (sotsukon), or “graduating from marriage,” used in late November by Hanada Kōji, the former sumō grand champion Takanohana, to describe his parting with his ex-wife Kōno Keiko.

eスポーツ — E supōtsu. Japan is climbing onto the esports bandwagon as video game competitions grow in popularity overseas. In February, the Japan Esports Union was formed as the governing body of esports in the country. Esports debuted as demonstration sport at the 2018 summer Asian Games in Jakarta, Indonesia, and will be a medal event at the 2022 games in Hangzhou, China.

（大迫）半端ないって — (Ōsako) hanpa naitte. This cheer was on the lips of soccer fans as they watched Japanese national team player Ōsako Yūya head in the winning goal against powerhouse Colombia during this year’s FIFA World Cup in Russia. Meaning something like “amazing Ōsako,” the phrase was coined by an exasperated rival player during the 2009 All Japan High School Soccer tournament to describe Ōsako’s outstanding skills.

おっさんずラブ — Ossanzu rabu. The comic drama Ossan’s Love—ossan is a Japanese pejorative for men 30 or older—became a runaway hit on TV Asahi. Taking a page from yaoi manga that depict gay relationships, it tells the story of Haruta Sōichi, played by Tanaka Kei, who is caught between the affections of his middle-aged boss Kurosawa Musashi (Yoshida Kōtarō) and roommate colleague Maki Ryōta (Hayashi Kento). Many critics were surprised that a miniseries on a major broadcaster focusing on homosexual characters was so well received in Japan.

ご飯論法 — Gohan ronpō. Hōsei University Professor Uenishi Mitsuko skewered evasive government lawmakers’ responses to questions about ongoing scandals by describing them as employing “gohan logic,” playing on the double meaning of gohan as both “meal” and “rice.” If someone asks if they have had breakfast (asagohan), they skirt the direct query by answering whether they ate rice (gohan) that morning (asa).

災害級の暑さ — Saigaikyū no atsusa. The soaring summer temperatures, which rose above 40 degrees in some areas, led the Japan Meteorological Agency to describe the baking weather as “disaster-level heat.”

スーパーボランティア — Sūpā borantia. Obata Haruo spends much of his retirement offering his services in search and rescue efforts after natural disasters. The 78-year-old “super volunteer” hit the headlines this year when he discovered two-year-old Fujimoto Yoshiki after the toddler had been missing for 68 hours.

そだねー — So da nē. The Hokkaidō-accented version of the phrase sō da ne, “yeah, that’s it,” was picked up on numerous occasions by microphones trained on the members of Japan’s women’s curling team at the Winter Olympics in Pyeongchang, South Korea. In addition to bringing home the bronze, Japan’s first-ever medal in the sport, the women’s squad charmed fans with their spirited communication on the ice as they competed.

奈良判定 — Nara hantei. The “Nara decisions” were judgments in boxing matches that went for fighters hailing from Nara, the home prefecture of Yamane Akira, who was forced to step down as president of the Japan Amateur Boxing Federation in August after allegations of match-fixing and other questionable activities. Referees who halted matches to give victories to other boxers when Nara pugilists were in the ring reported coming in for torrents of abuse from Yamane.

ボーっと生きてんじゃねーよ！ — Bōtto ikiten ja nē yo! Chiko-chan, a child with an outsized head and computer-generated expressions, shouts “Stop living your life like a total space case!” at the adult guests on a weekly NHK program exploring the trivia behind everyday expressions and events. Guests who offer only vague, noncommittal answers to questions like “Why aren’t soccer players allowed to use their hands?”—things that everyone knows, but few have ever given deep thought to—are in for a haranguing from Chiko-chan, described as a surprisingly knowledgeable five-year-old. The program Chiko-chan ni shikarareru (literally “Getting Scolded by Chiko-chan”; tagged with the English subtitle “Don’t sleep through life!” by NHK), aired on Friday nights, proved popular, but gained even higher ratings for its Saturday morning rebroadcast slot, perhaps because it followed the broadcaster’s popular morning dramas. 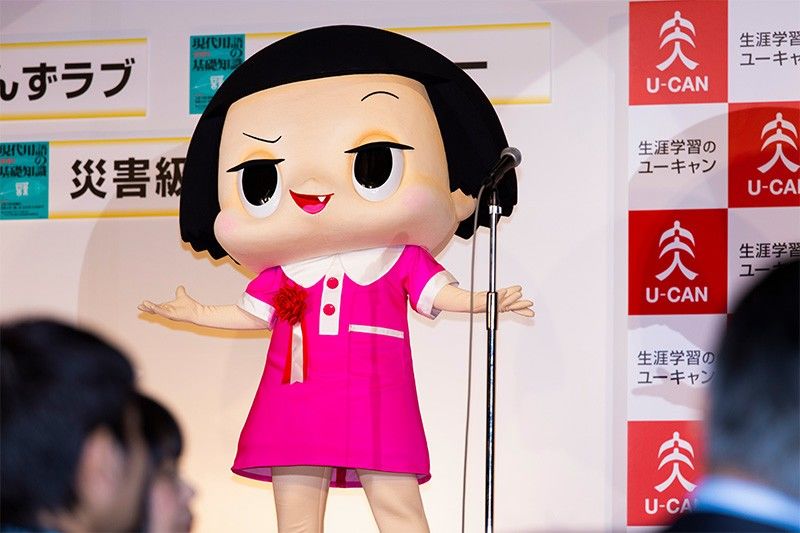 Chiko-chan takes the stage at the December 3 ceremony.

#MeToo — This hashtag and the global anti-sexual-harassment campaign connected to it had an impact in Japan as well this year. First appearing after accusations came to light in October 2017 against Hollywood mogul Harvey Weinstein, the #MeToo hashtag saw widespread use in Japan as stories emerged of harassment cases involving journalists, celebrities, politicians, and people from many other walks of life. 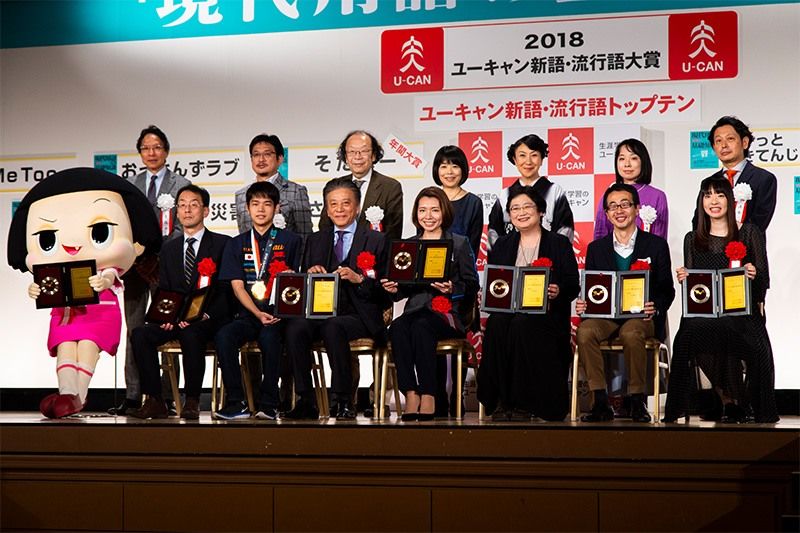 Selection committee members stand at the back as this year's prize recipients take seats at the front.