Society Culture Jul 23, 2016
The influence of Western-style housing has been significant in Japan, but many traditional elements remain.

Take Your Shoes Off

Minka, or traditional Japanese houses, are characterized by tatami mat flooring, sliding doors, and wooden engawa verandas. Another aspect that persists even in Western-style homes in Japan is the genkan, an entrance hall where people remove footwear. The flooring for the house proper is raised a little off the ground to prevent dampness from entering and to keep the living area from flooding in the case of heavy rain. The lower level is known as the tataki, and was traditionally made of packed earth, although concrete is common today. After removal, shoes are put in the getabako—a cabinet that derives its name from geta, or wooden clogs, that Japanese people once commonly wore. 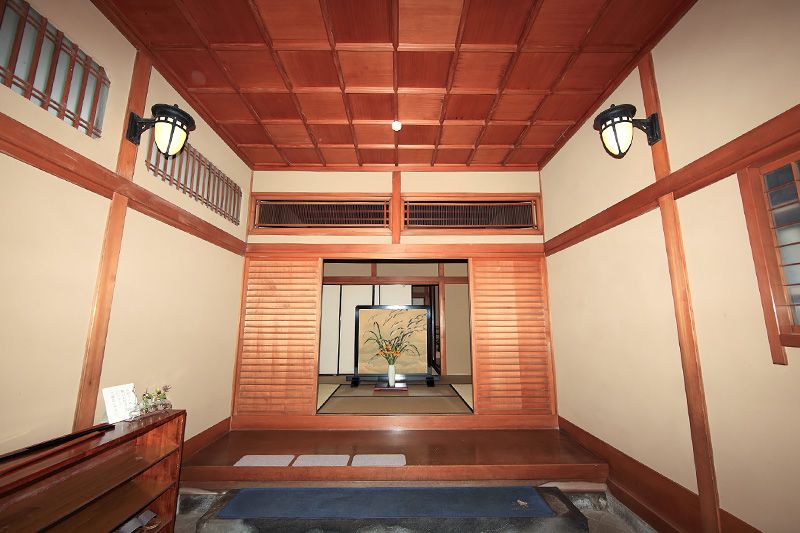 A genkan entrance hall with a getabako (left) for shoes and a tataki (foreground).

Heavy rain can damage roofs, so outside the entrance, amadoi gutters carry rainfall off the eaves and down the decorative kusaridoi, or “rain chain.” 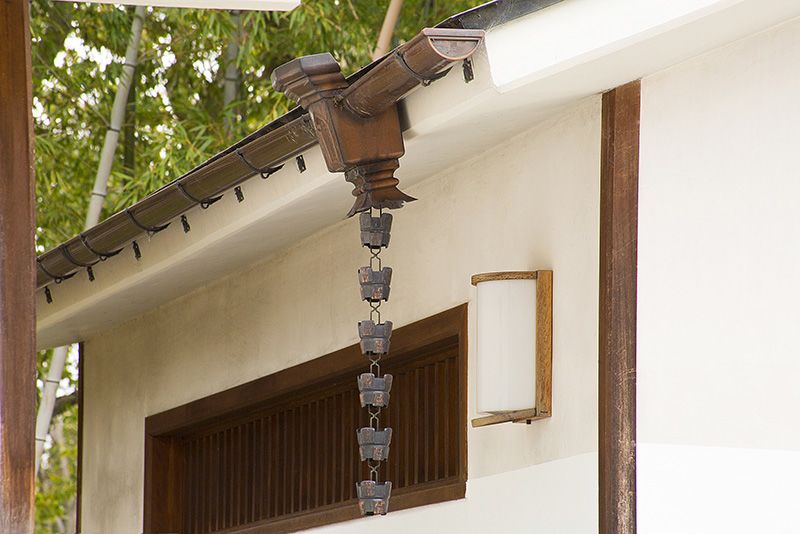 Rainwater travels along the gutter and down the kusaridoi rain chain.

Rooms are divided by partitions made from washi, Japanese paper. To enter, simply slide the door along its wooden rail. A common distinction is made between fusuma and shōji. Fusuma use heavier paper or sometimes cloth and are opaque, serving as a more distinct barrier. Unlike walls, however, fusuma can easily be removed to rearrange space within the house.

Shōji are lighter than fusuma, with paper affixed to a wooden lattice. They prevent people from seeing through, but brighten up rooms by allowing light to pass. As paper is porous, shōji also help airflow and reduce humidity. In modern Japanese-style houses they are often set in doors between panes of glass. With one variation, known as the “snow-viewing” or yukimi shōji, it is possible to slide up the lower section and look out through the glass.

Tatami flooring covered with woven rush is perhaps the most essential element in a traditional house. The faint smell of tatami is a distinct characteristic of Japanese rooms, and the springy but firm mats are pleasant to sit or lie on. Real estate agents still use the jō, or mat, standardized at 1.62 square meters, as the unit for measuring the area of rooms in properties, whether Japanese or Western-style.(*1) One mat can absorb up to 500 milliliters of moisture, releasing it when the air is dry. Tatami also absorbs nitrogen dioxide, helping to clean the air.

The tokonoma is an ornamental alcove set slightly above floor level. Homeowners may use it to display a hanging scroll or picture, accompanying these with an ikebana flower arrangement, kōro incense burner, or piece of pottery. 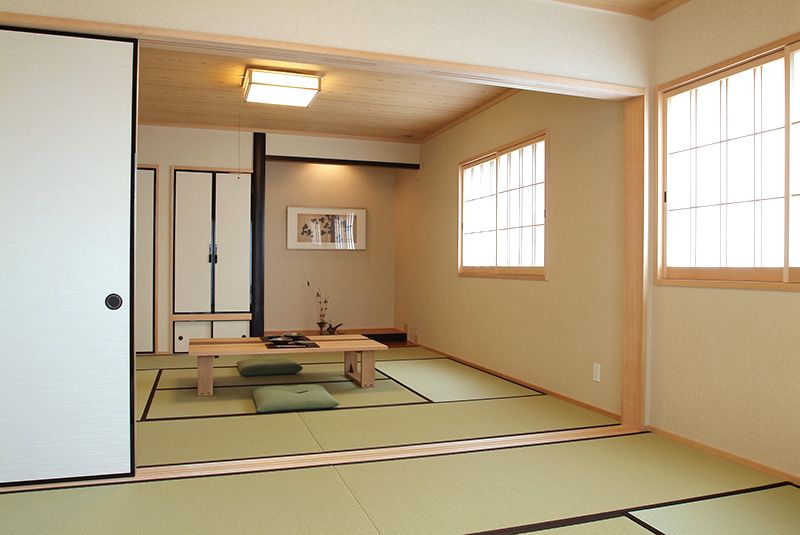 A Japanese-style room with a fusuma sliding door to the left, shōji-style windows, tatami flooring, and a tokonoma set into the far wall.

Even while the number of purely traditional washitsu rooms diminishes, it is common to lay tatami in one part of a Western-style room for sleeping, set up shōji instead of curtains, and set off lights with washi lampshades. 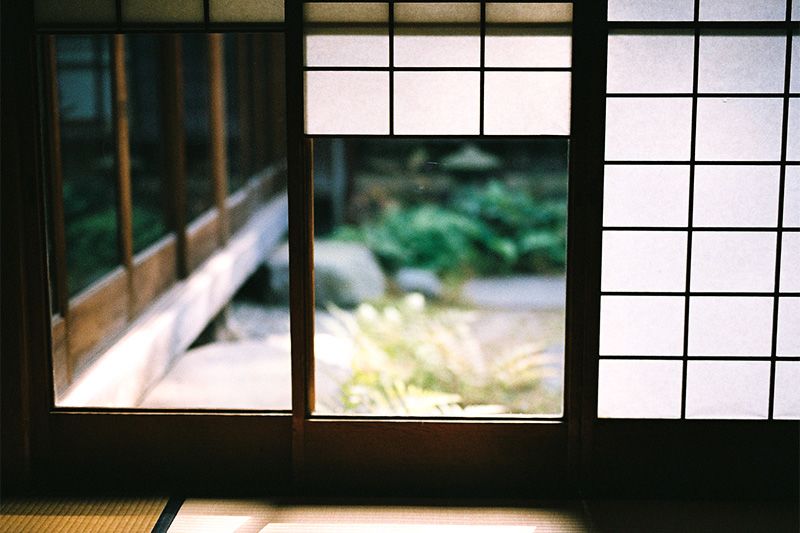 With yukimi shōji, it is possible to lift up the lower sections and look out through the window.

In Japanese houses the toilet and bathroom are separated. The bathroom itself consists of an area for washing and a tub for soaking. There is also a small adjoining room for getting dressed and undressed. Japanese families generally use the same bathwater, being careful to get clean and rinse off the soap before entering it, and the tub is not drained until everyone has had a bath.

Squat toilets were once standard in Japanese homes, but they have been superseded by high-tech units with heated seats and other features. 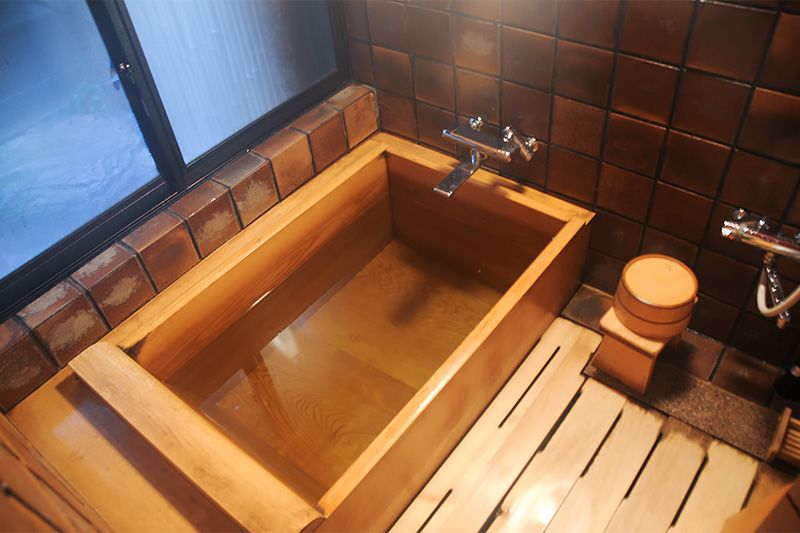 Bath and washing space at the Hiiragiya ryokan in Kyoto.

Many people sleep in beds, but traditional futons are still popular. A 2013 survey by Nifty found that 50% of respondents slept on futons laid out on tatami mats. During the daytime, futons can be stored in cupboards, making more space available in rooms. It is common to hang them outside to air on sunny days, making them fluffy and comfortable to doze on. It is said that Japanese houses are built to allow breezes to pass through and cool residents during the stifling heat of summer. Conversely, though, this makes winter a cold, uncomfortable time even when indoors. Filling a hot water yutanpo bottle is one way to stay warm at night, while heaters or kotatsu tables are necessary during the daytime. 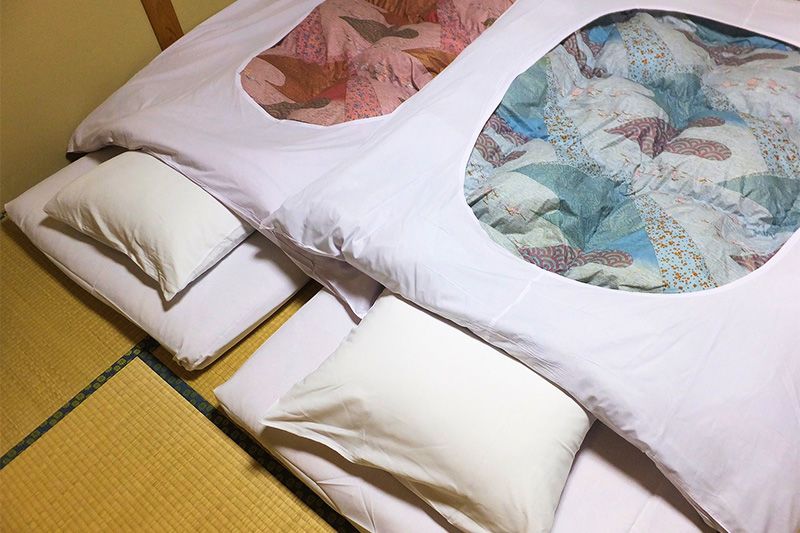 Some traditional houses have been refurbished to include comforts common in modern homes or converted into ryokan or minshuku lodgings. For visitors to Japan, staying in an old-style accommodation is a good way to experience the traditional charms of the country.

(Banner illustration: A cat naps on an engawa veranda.)

(*1) ^ One traditional tatami mat size is 6 shaku by 3 shaku, using the Japanese unit of length to produce an area of 1.653 m2. But there are many different traditional mat sizes in use around Japan, from the danchima tatami used frequently in the danchi housing units put up in the postwar era (1.445 m2) to the kyōma commonly seen in older homes in western Japan (1.824 m2). Japan’s Real Estate Fair Trade Council defines 1 jō as “at least 1.62 m2,” or 90 cm × 180 cm, for the purpose of measuring rooms.