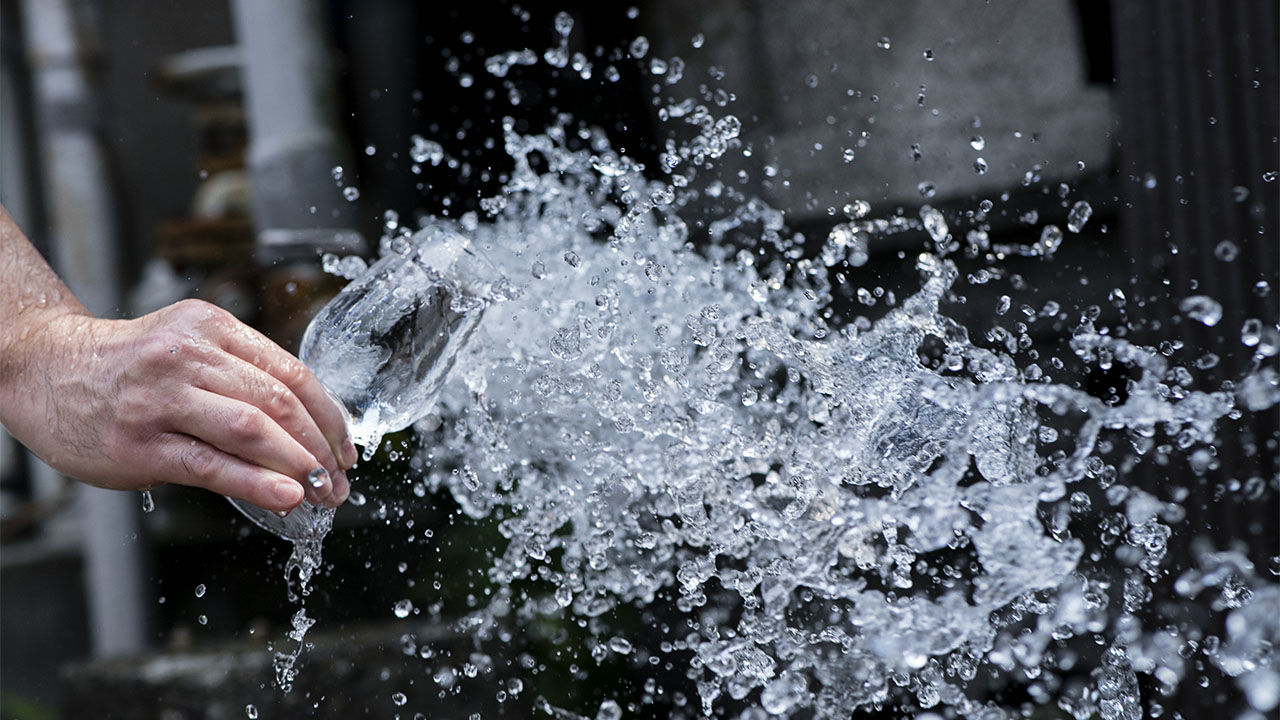 Culture Oct 9, 2018
Water is an essential element of a sake’s terroir—the natural and cultural environment that gives a product its local character. Sandō Atsuko explains the role of water in the brewing process and traces a Shizuoka brewer’s quest for authenticity.

The sake renaissance is not just about fruity flavors with international appeal. It has also given rise to exceptional products in a more traditional vein. Kikuyoi (produced by Aoshima Shuzō in Fujieda, Shizuoka Prefecture) may not be a global superstar, but it has won a devoted following in the world of Japanese gastronomy, thanks to its delicate flavors and smooth drinkability. Its secret? Brewer-owner Aoshima Takashi has taken local craft brewing to the next level, growing his own organic Yamadanishiki rice and tapping the full potential of the area’s key resource: water. 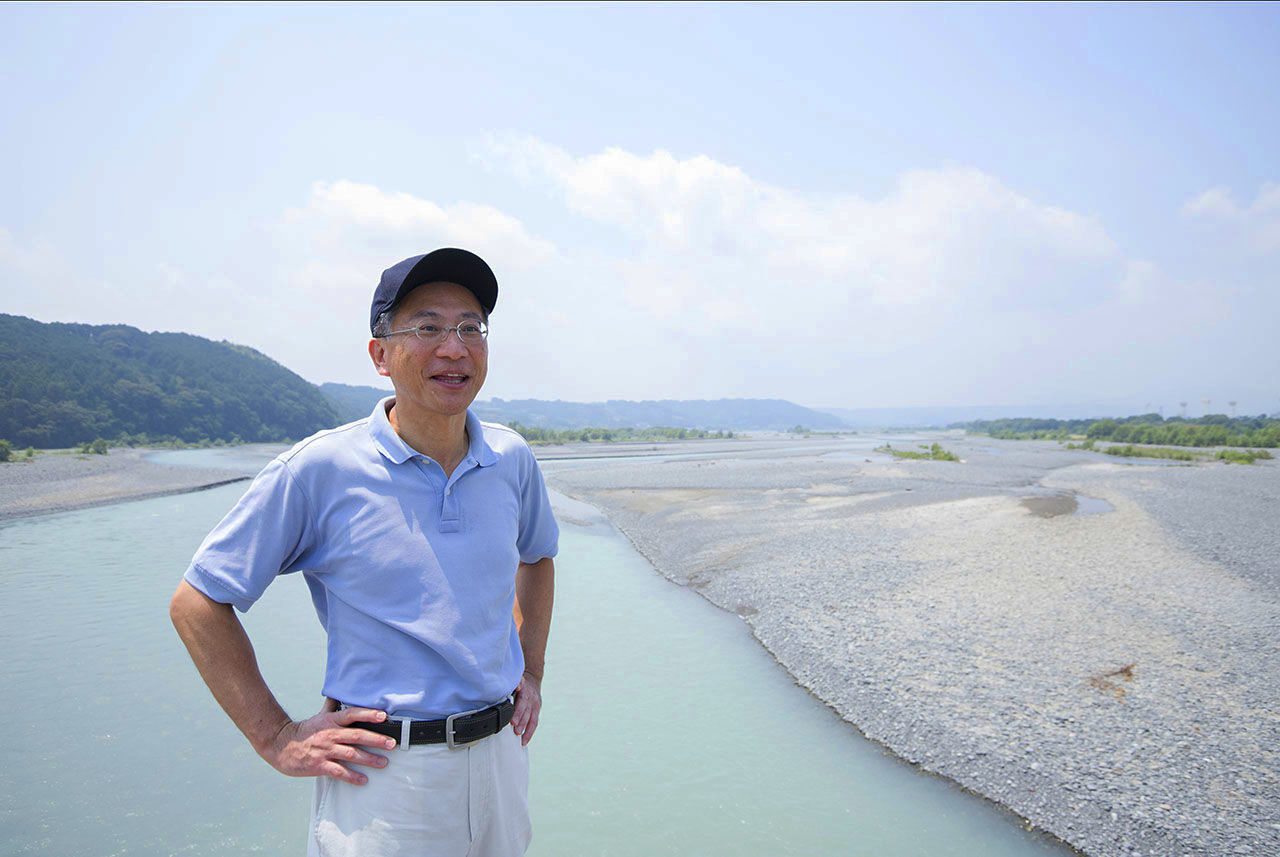 Brewer-owner Aoshima Takashi at home in Fujieda in central Shizuoka Prefecture. Behind him stretches the Ōi River, which nourishes the region’s thriving sake industry as well as its fertile rice paddies.

Sake is about 80% water, and because uncooked rice (unlike grapes, for example) has very little moisture content, the water must be added at various stages in the brewing process. To better understand how water affects sake quality, let’s take a closer look at those steps.

First, large quantities of water are used to rinse the polished rice (a process known as senmai) so as to remove the residue clinging to the grains after milling. Once rinsed, the uncooked rice is left to soak, or steep, in water (shinseki) until it absorbs roughly 30% of its starting weight. Even at these preparatory stages, the use of unsuitable water can compromise the quality of the finished product.

Next, the drained rice is steamed over hot water. A portion of the steamed rice is used to make rice kōji, a special mold culture essential to sake brewing. When the rice kōji is ready, it is mixed with a quantity of plain steamed rice, yeast, and water to make the yeast starter (shubo). To this starter, a mixture of rice kōji, steamed rice, and water is added in three stages (sandan-jikomi) to make the mash, or moromi, which is left to ferment.

The mineral content of the water used in each of the foregoing stages influences the growth of yeast and kōji, which in turn affects the taste and other attributes of the finished product. For example, certain minerals support the growth of yeast and accelerate fermentation. As a result, water that contains these minerals in higher concentrations (hard or “strong” water) tends to yield a crisp, dry sake. Softer or “weaker” water results in slower fermentation and a smoother, softer sake. Although most Japanese water is considered soft by international standards, the exact mineral content varies from one locale to another, and local brewers have developed techniques adapted to the type of water available to them.

When fermentation is complete, the moromi is filtered to remove the solids (sake kasu, or lees). This produces a brew known as genshu (“raw” sake), which is typically blended with water to bring the alcohol content down to around 15%. The water added at this stage (warimizu) can directly affect the final flavor profile. Indeed, to some tasters, a sip of Kikuyoi immediately calls to mind the famously clear, delicious waters of the Ōi River system.

Wellspring of a Local Industry

Water is also used in pasteurizing, not to mention the meticulous cleansing of equipment and facilities. Aoshima likes to quote his revered mentor, the late Kawamura Denbei, who taught that “sake brewing begins and ends with washing.” Depending on their scale, breweries can consume hundreds of tons of water each day during sake-brewing season.

It is not surprising, then, that Japanese sake breweries tend to cluster around plentiful sources of good water. The Shida plain of central Shizuoka Prefecture is a case in point. This is fertile land fed by multiple river systems, including the Ōi River, which has its source high in the rainy Akaishi Mountains (also known as the Southern Alps). The area has its own brewers’ guild and is currently home to six sake breweries, including Aoshima Shuzō, officially established 150 years ago, in 1868.

According to brewer-owner Aoshima Takashi, his family's involvement in sake brewing extends back even further, to the Edo period. During the first half of the eighteenth century, Aoshima's forebears held the hereditary position of shōya, or village headman, in a district of the central Shida plain covered with small rice farms. They seem to have begun brewing sake as a sideline, a way of putting surplus rice to use while making the most of the region’s abundant, high-quality water resources.

More than two centuries later, Aoshima Shuzō is thriving. It is a small-scale operation, with a yearly output of just over 140 liters, but every bottle produced is spoken for before brewing ever begins. In addition, the business’s profit margin has grown as demand has shifted toward the top grades of sake.

But it was not always thus. In the 1980s and 1990s, with sake consumption declining year by year, Aoshima Shuzō, like many regional brewers, was facing an uncertain future.

Return of the Native

As the eldest son of fourth-generation owner Aoshima Hideo, Takashi was the natural heir to the family business. But his destiny seemed to lie elsewhere. “My father never told me, ‘You have to do this,’ and I didn’t see much future in a little provincial brewery like ours, so I left home to escape the family business,” he says. He studied economics at Waseda University in Tokyo and spent his vacations backpacking around the world, visiting some 80 different countries as a college student. Aoshima’s penchant for globetrotting inspired his choice of career, and he ended up at a global investment bank after graduation. In 1993, he went to work as a fund manager in the firm’s New York office. “I had no intention of ever returning to take over the family business,” says Aoshima.

But after two years in New York, Aoshima was dissatisfied, finding his work unfulfilling. As he read over letters from his mother, filled with news from home, his thoughts returned again and again to the image of his parents working away diligently at the family brewery. From his position at the center of the fast-paced world of international finance, he felt himself gaining a new respect for the patient, laborious process of sake making—from the cultivation of rice to the precise yet labor-intensive brewing process—and for the tradition his family had built into a business and preserved over the generations. “Looking into my heart, I rediscovered my identity. I finally realized that I wanted to spend my life brewing sake back in my hometown.” 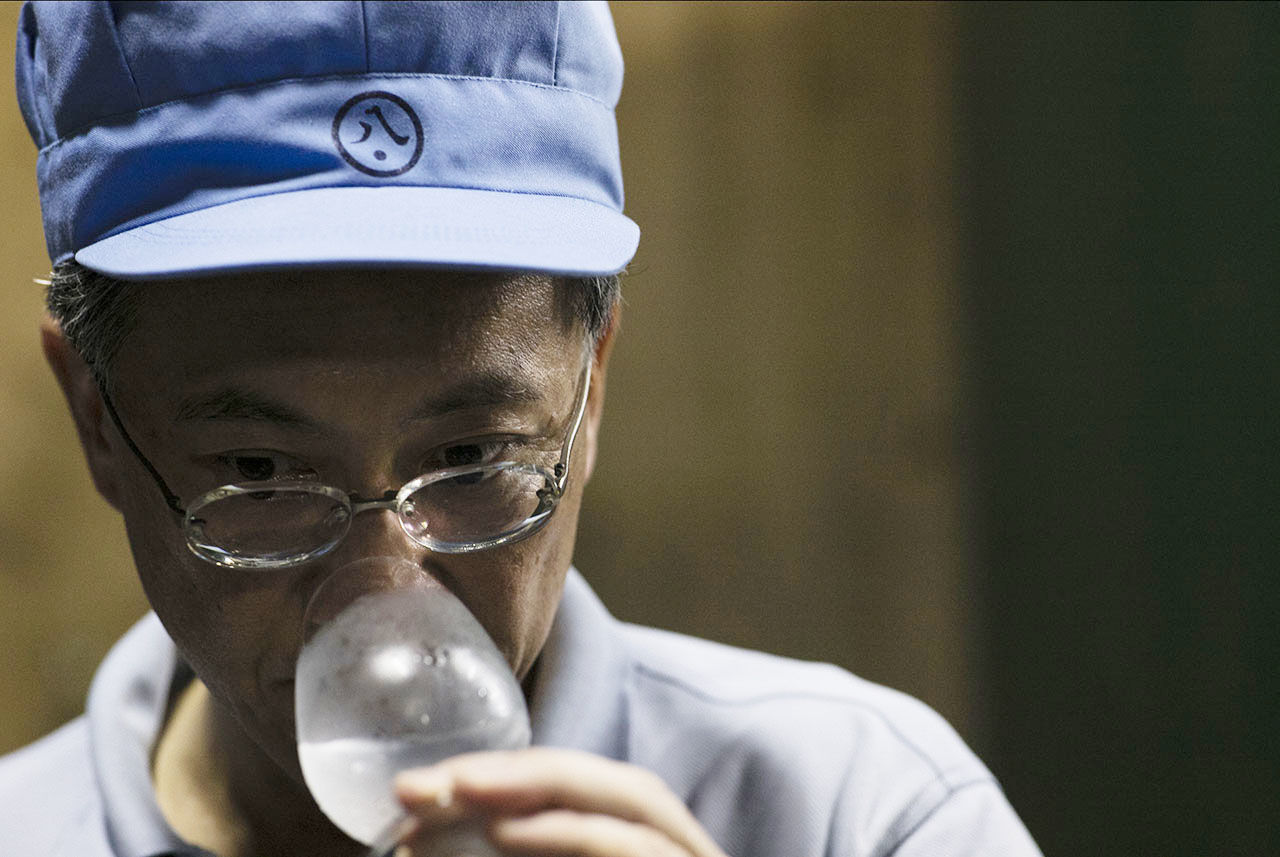 As a tōji (master brewer), Aoshima Takashi adopted the professional name Denzaburō in honor of his mentor, the brewing scientist and pioneer Kawamura Denbei.

Aoshima returned to Fujieda in 1996, determined to build a new career as a hands-on artisanal brewer-owner. “What I felt as I gazed on Mount Fuji and drank the clear, cold water from our family well . . .  was something very intense,” says Aoshima with emotion. That same well water, prized for its consistent mineral content, had been the lifeblood of his family and its brewing business for generations. It was also a chief source of inspiration for Aoshima as he pursued his vision of a nihonshu true to its regional roots—a truly local sake that could be produced nowhere else.

Modern transport networks and rapid advances in brewing technology have made sake producers far less dependent on local conditions and resources than in earlier times. It could even be argued that, with the requisite equipment and know-how, high-quality sake can be brewed anywhere. But after years overseas, Aoshima had a newfound appreciation for the special attributes of his birthplace, and he was determined to create a sake that reflected the region’s unique character.

Like many a young brewer-owner during this period, Aoshima went back to school to learn the latest advances in sake brewing. His school was the Numazu Technical Support Center, a branch of the Industrial Research Institute of Shizuoka Prefecture, and his chief instructor was Kawamura Denbei, a researcher who helped lay the foundation for Shizuoka’s sake renaissance. Kawamura’s contributions to sake brewing technology, including his development of an important new yeast strain, helped Shizuoka overcome the handicap of a warm climate to become a major producer of top-quality ginjō-shu.

Aoshima did not adopt a strictly modern, scientific approach to brewing, however. He also trained with a master brewer from the local brewers’ guild—the Shida tōji—to master the traditional craft as it had evolved in that part of Japan. Having earned the title of tōji himself, he continues to apply the Shida tōji’s basic methodology. But with time and experience, he was able to weave science and tradition into something uniquely his own.

“In the beginning,” says Aoshima, “I was in pursuit of a kind of abstract ideal, and I kept struggling to impose my own ideas on the sake. But over time, I came to see my role as that of a facilitator, helping the rice and water of this unique region become what they wanted to become.”

The soft water from the Ōi River system lends itself to slow fermentation. To accentuate the resulting character, Aoshima opted to use a slow-acting kōji, which takes considerably longer to culture than ordinary kōji strains (72 hours as opposed to 48–52). Successfully culturing this mold also requires careful calibration of rinsing, soaking, and steaming times. 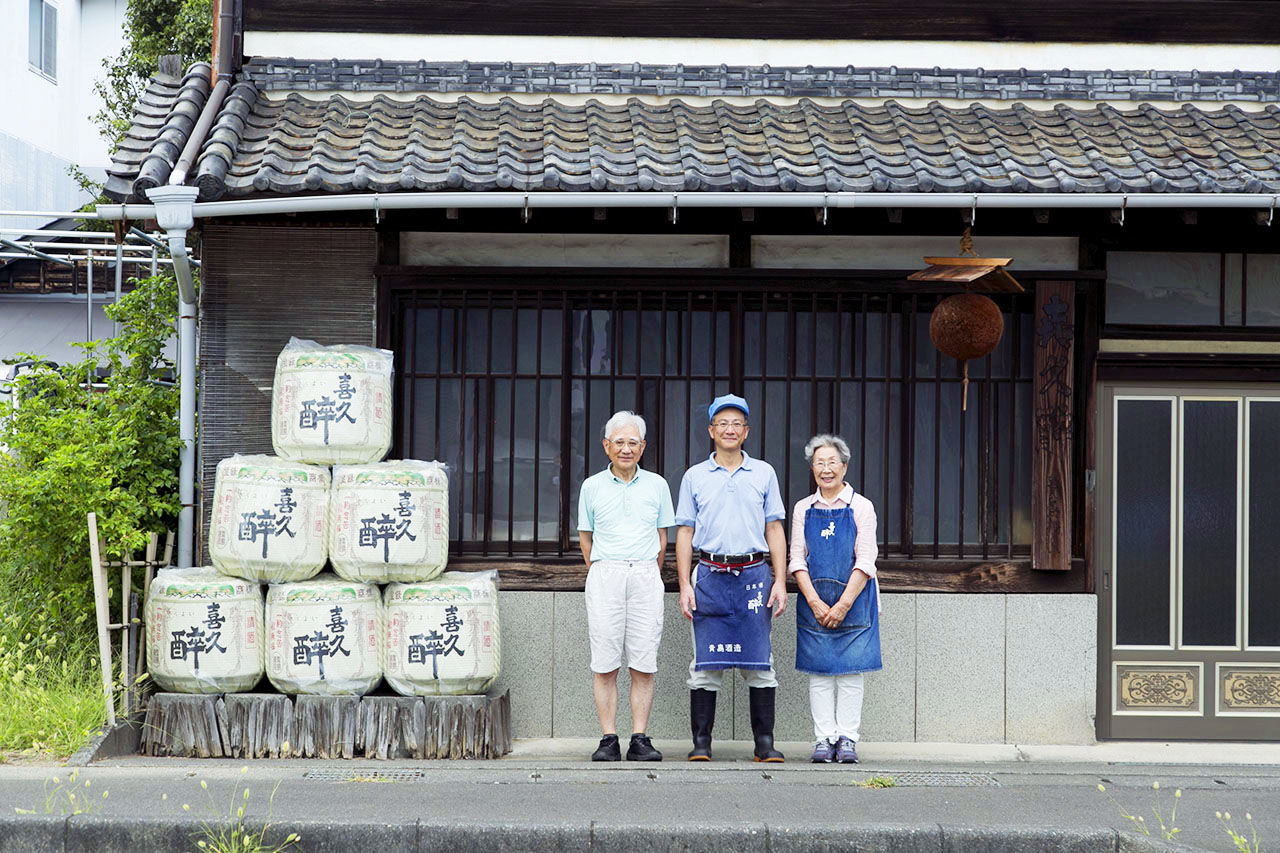 The Aoshimas (brewer-owner Aoshima Takashi, center, with his father Hideo and mother Hisako) in front of their small family brewery, whose foundations date back to the Edo period. 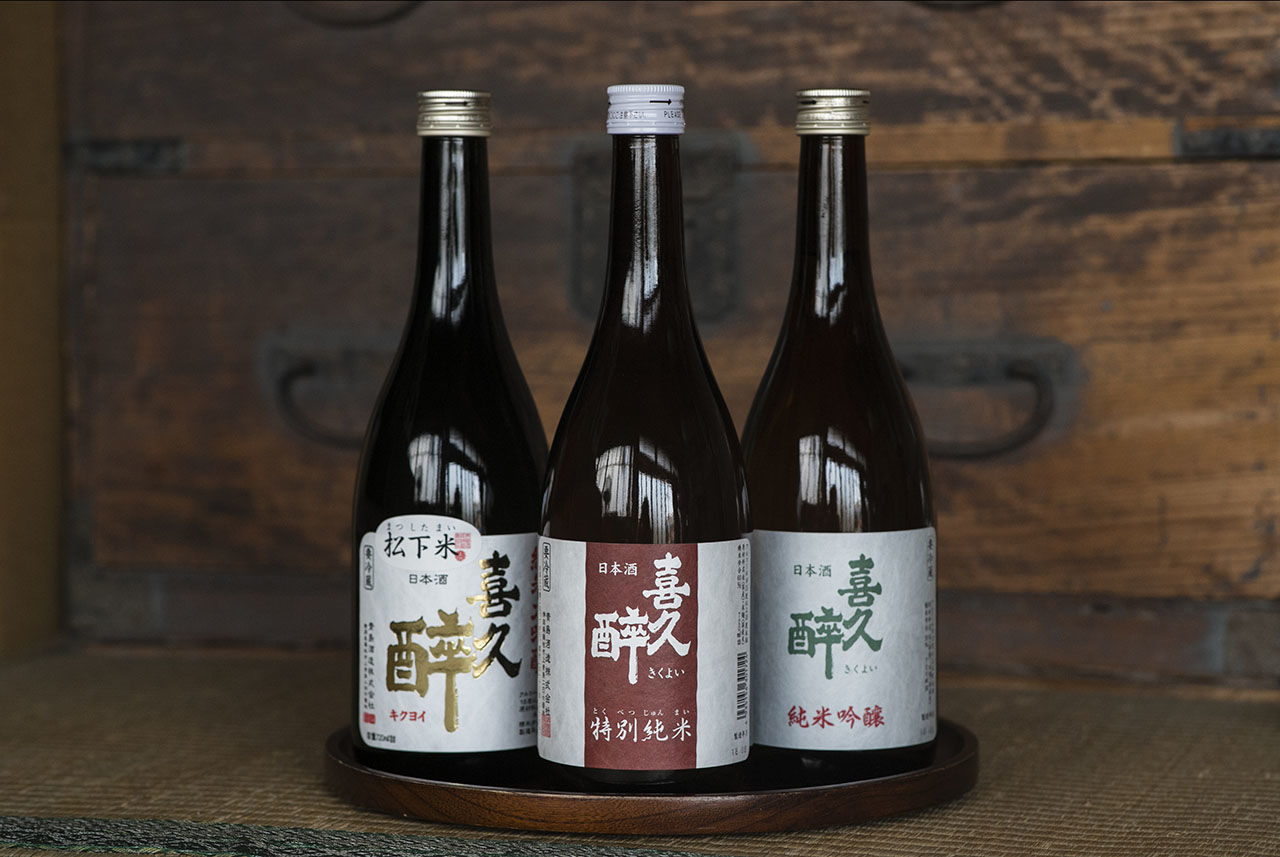 Aoshima Shuzō makes several varieties of Kikuyoi, including the junmai daiginjō “Matsushita-mai 40” (left), made with a special local strain of Yamadanishiki rice, organically grown and polished to 40% of its original weight. Light, drinkable, and low in acidity, Kikuyoi is considered an exemplar of Shizuoka-style sake.

The aim of all this fine-tuning was the perfection of a brewing process adapted in every particular to this locale’s unique climate, water, and other physical attributes—or, to use the French term, the terroir. In keeping with that orientation, Aoshima cultivates his own organic rice, working alongside a local rice farmer and close friend, Matsushita Akihiro. In the spring and summer, when other sake owners and brewers are off promoting their products at sake-tasting events or touring French vineyards, Aoshima can be found out in the field, hand-weeding his agrochemical-free rice paddy.

The fruit of these labors is the brewery’s acclaimed Kikuyoi, whose gentle, subtle flavors are an eloquent tribute to the basic ingredients of life in this fertile region: rice and clear, clean water. 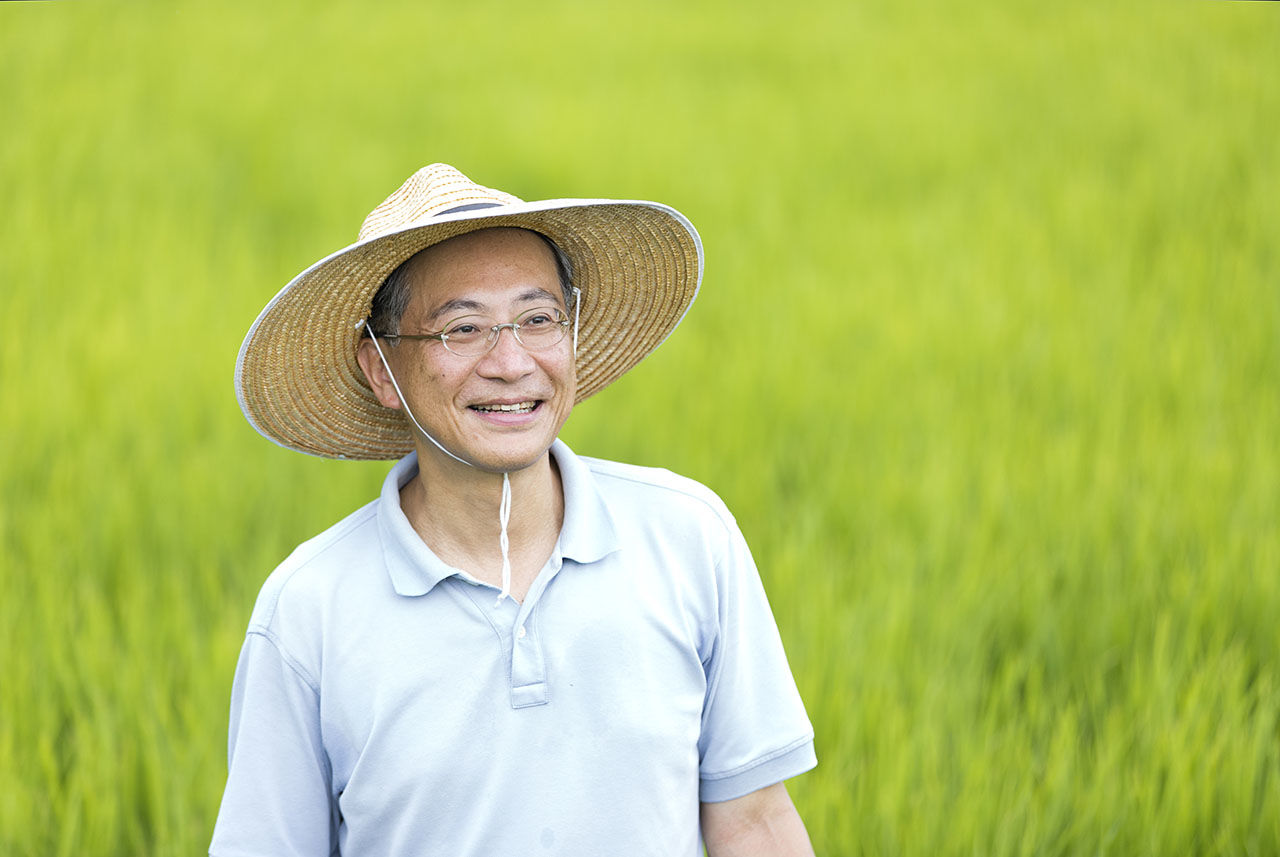 Aoshima Takashi can be found out in his agrochemical-free Yamadanishiki rice paddy.

(Originally published in Japanese. Banner photo: The water used to make Kikuyoi is pumped from a 60-foot aquifer, part of the Ōi River system. It is renowned for its clean, fresh aftertaste. All photo by Kawamoto Seiya.)