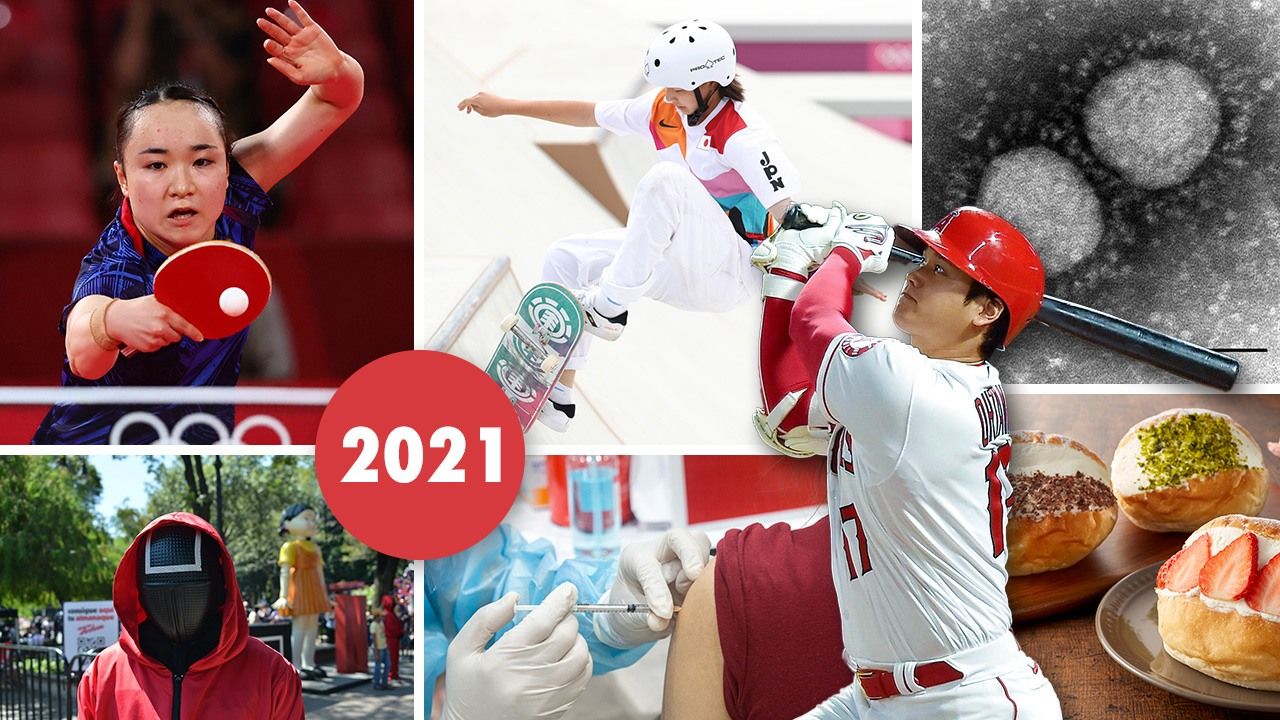 Language Nov 4, 2021
On November 4, the publisher Jiyū Kokumin Sha announced its list of nominees for the words and phrases best representing the year 2021. Our complete list of the nominees with explanations.

New Words for a Pandemic Year

Each year Jiyū Kokumin Sha, the publisher of Gendai yōgo no kiso chishiki (Basic Knowledge on Contemporary Terminology), an annual guide to the latest terms in use in the Japanese language, holds its contest to decide the Words of the Year. For 2021, the nominating committee selected a list of 30 terms that have made themselves a part of the spoken and written landscape in Japan this year.

As expected, the COVID-19 pandemic inspired many of the terms, from “recuperating at home” to the “flows of people” potentially spreading the disease and the “viral variants” posing new threats to a public trying to avoid infection. The entertainment and sports world provided their fair share of nominees too, though, pointing perhaps to the importance of escapist media consumption among people staying away from crowds in their free time as they waited for the pandemic to die down.

Below is the list of all 30 nominated terms or phrases, along with our brief explanations. The finalists and the winning word (or words) for the year will be announced on the afternoon of December 1, Japan time.

Nominees for the Words of 2021

うっせぇわ — Ussee wa. High school singer Ado expressed her anger toward society through a song titled with an aggressively phrased form of “Shut up!” Originally released in October 2020, it took off in 2021.

ウマ娘 — Uma musume. In a world in which famous racehorses are reborn as “horse girls” with ears and tails, players of the popular Uma musume puritī dābī (Umamusume: Pretty Derby) mobile game take on the role of their trainers for new races.

SDGs — The abbreviation for the Sustainable Development Goals, adopted by all United Nations members in 2015, appeared regularly in the Japanese media this year. The 17 targets include eradicating poverty and achieving gender equality.

NFT — The abbreviation for nonfungible tokens, the unique digital assets that made headlines for big-money sales in 2021, was another phrase also seen in Japan.

エペジーーン — Epe jīn. Japan’s men’s épée team surprised many observers by winning the gold medal at the Tokyo Olympics. Captain Minobe Kazuyasu provided the nickname that translates roughly as “épée teeeam,” while also playing on the meaning of jīn as something that stirs up emotion.

推し活 — Oshikatsu. “Support activities” refer to anything fans may do to show their appreciation for their idols. The first part of the phrase appeared in the title of the novel awarded the Akutagawa Prize in January, Oshi, moyu (Cheering, Burning) by Usami Rin.

カエル愛 — Kaeru ai. Gold-medal winning boxer Irie Sena’s amphibian interests drew attention after her Olympic victory, as she emphasized her “frog love,” sharing her hopes that after she graduated she wanted to find a job involving frogs.

自宅療養 — Jitaku ryōyō. As hospital beds filled during successive waves of COVID-19, “Recuperate at home” was the Japanese government’s request to asymptomatic or mildly ill patients to stay home or at hotels until they had fully recovered to ease the burden on the strained medical system. Subsequently, the country saw a surge in deaths of people with the coronavirus who had been ordered to stay home.

ととのう — Totonou. Among sauna devotees in Japan, the verb totonou, meaning “to arrange” or “to prepare for,” describes a state of physical relaxation and mental alertness reached by rotating through cycles of steam baths and soaks in cold water, punctuated by rest periods. Hot springs and public baths serve as community hubs, but the pandemic forced people to curtail or forego trips entirely. Saunas subsequently drew attention as a way to “prepare” for another day dominated by news about COVID-19, being featured in popular television dramas and manga works.

フェムテック — Femutekku. “Femtech,” combining the English words feminine and technology, refers to efforts to apply tech to issues that women face in their physical and mental health. The term encompasses everything from technological solutions to ease menstrual pain and improve quality of life for women experiencing menopause to smartphone apps letting users track their menstrual cycle and phases of pregnancy.

副反応 — Fukuhannō. “Side effects” were a concern for many getting vaccinated for COVID-19 this year, as the media reported additional effects brought about by the shots including pain, itchiness, and swelling in the area where the shot was delivered, fever, chills, and joint pain.

ピクトグラム — Pikutoguramu. “Pictograms” are nothing new, but a presentation of the images representing the events at the Tokyo 2020 Olympics during the opening ceremony—with a team of five pantomime performers including Gamarjobat and the comedy duo Gabez dressed in blue suits and large round heads enacting all of the pictograms in rapid succession—proved popular. Olympic pictograms made their debut at the 1964 Tokyo games.

変異株 — Hen’i kabu. “Viral variants” or “mutant strains” were big news in 2021 as the COVID-19 threat developed in new directions with the emergence of the Delta and other variants of the SARS-CoV-2 virus. New viral strains are formed when errors are introduced into a virus’s genetic information as it is copied into a host body’s cells. The Delta strain, first identified in India, was widely seen in Japan from July onward as the nation’s fifth wave of COVID-19 infections got underway.

マリトッツォ — Maritottso. The Italian dessert maritozzo was a hit this year in Japan, with restaurants and even convenience stores serving up the sweet, egg- and butter-heavy bread packed with a dollop of whipped cream to eager eaters.

黙食／マスク会食 — Mokushoku; Masuku kaishoku. A newly coined word for “silent dining,” mokushoku was joined by terms like “the masked meal” as restaurants urged diners to eat without the conversation considered to be a means of viral transmission and to put their masks on whenever they weren’t using their mouths to eat and drink.

ヤングケアラー — Yangu kearā. “Young carers” are those under the age of 18 tasked with providing nursing or other care for family members at home. The phenomenon of economic and other circumstances forcing these youths into positions ordinarily handled by adults has been talked about since around 2014, but this year it exploded in the public consciousness as a serious problem confronting Japan.

路上飲み — Rojō nomi. “Street drinking” became a pastime among people unable to enjoy their alcohol in restaurants or bars due to repeated requests for shortened operating hours and removal of booze from the menu in response to rising COVID-19 transmission numbers. Groups could be seen gathering in parks and convenience store parking lots to enjoy an outdoor version of the indoor drinking no longer available to them.