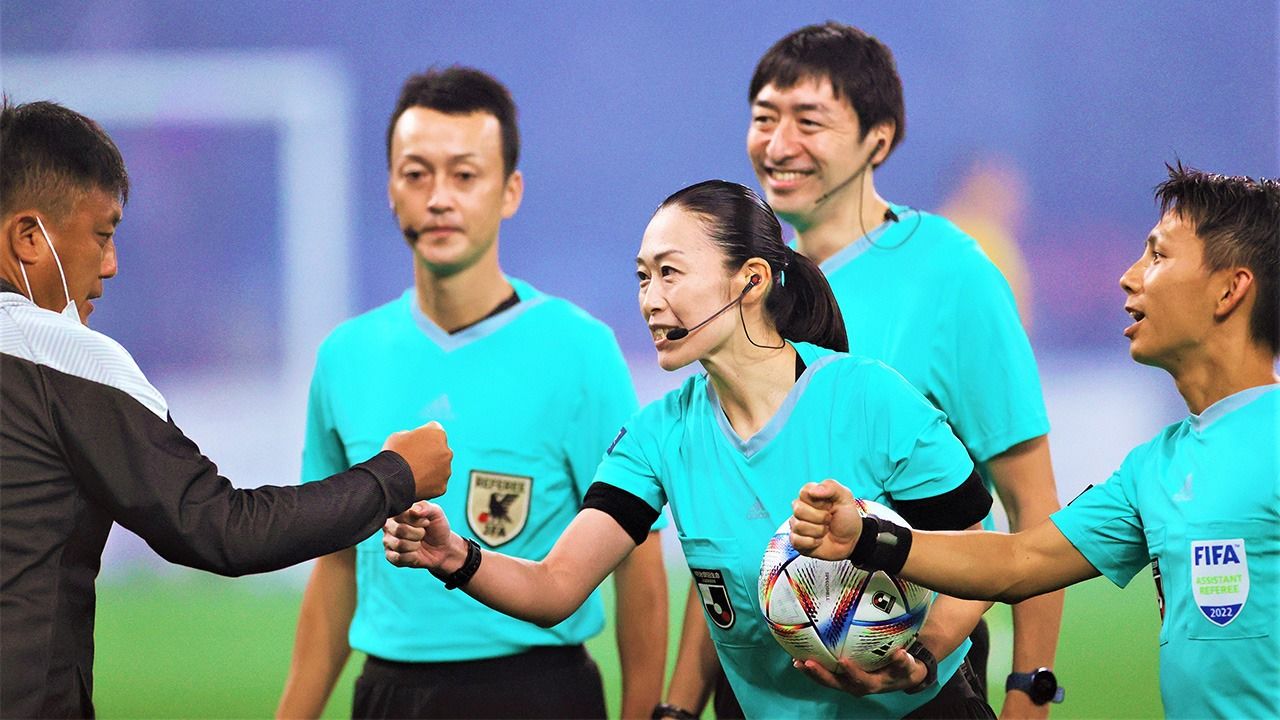 The FIFA World Cup will kick off in Qatar on November 20. Although the autumn scheduling is unusual for the tournament, what is generating greater buzz is the historic selection of six female officials, three referees and three assistant referees, to oversee matches. Japanese official Yamashita Yoshimi will be one of the refs blowing the whistle at Qatar.

A native of Tokyo, the 36-year old Yamashita played soccer in her younger years before switching to officiating at the suggestion of veteran referee and fellow Tokyo Gakugei University alum Bōzono Makoto. She has served as head referee at international women’s soccer tournaments as well as all-male competitions in Japan, including the national high school championships. In 2021, she was tapped as the first female referee in the J. League, and in September 2022 she oversaw matches in the top-flight J1 division.

Female referees have been making inroads into the world of men’s soccer. Even before the World Cup, women officials have increasingly been tapped to oversee matches in different European leagues. In December 2020, Stephanie Frappart of France, who will join Yamashita in Qatar, became the first woman to officiate in the UEFA Champions League when she refereed a match between Juventus and Dynamo Kyiv.

This demonstrates a gradual shift in men’s soccer. The long dominant thinking has been that women were physically incapable of sustaining the high level of speed and stamina required for professional men’s games and would not be able to stand up to players questioning calls.

Today, female referees clearly demonstrate the absurdity of such sexist views. Yamashita, who trains under the guidance of a former track and field athlete, has shown that she is more than able to meet the physical demands of her job. She has also illustrated her skills at keeping control of matches by dealing calmly and deftly with players. Clearly, it is time to relegate the idea that women are not cut out to referee men’s competitions to the garbage heap.

Yamashita’s selection as a referee for the World Cup has drawn broad media coverage and impacted the Japanese sports world, precisely because she defies inherently biased assumptions about women. And her example has given courage to women in other sports where referees still tend to be exclusively men. 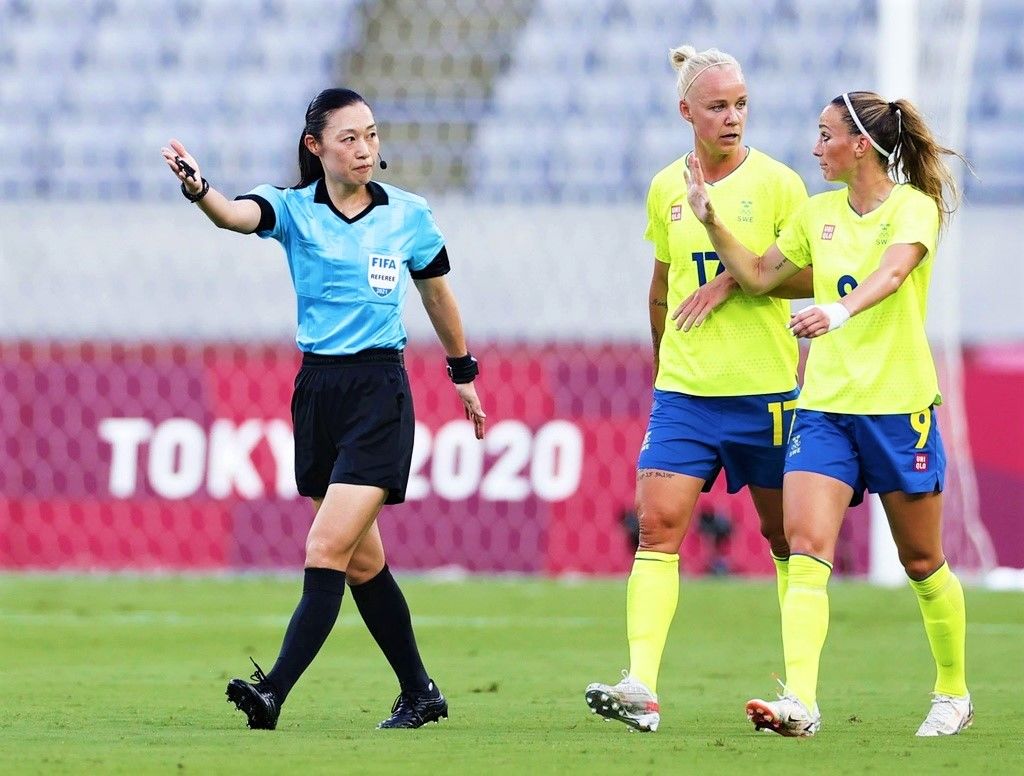 Yamashita officiates a match at the 2020 Summer Olympics between the United States and Sweden on July 21, 2021, at the Ajinomoto Stadium. (© Kyōdō)

Female Referees in Other Professional Sports

Soccer is but one of many sports where female referees are becoming fixtures of men’s competitions.

Baseball, one of the most popular professional games in Japan, has long accommodated the view that only men can officiate games, a deeply embedded bias that has prevented female umpires from joining the professional ranks. But things are slowly changing.

In 2002, Takami Satoko became the first female home plate umpire in the Kansai 6 University Baseball League. There was a hiatus of female umpires after that, but in 2018, Satō Kana brought fresh attention to the issue of women officials when she served as the home plate umpire for the first division games of the collegiate Hanshin Baseball League. 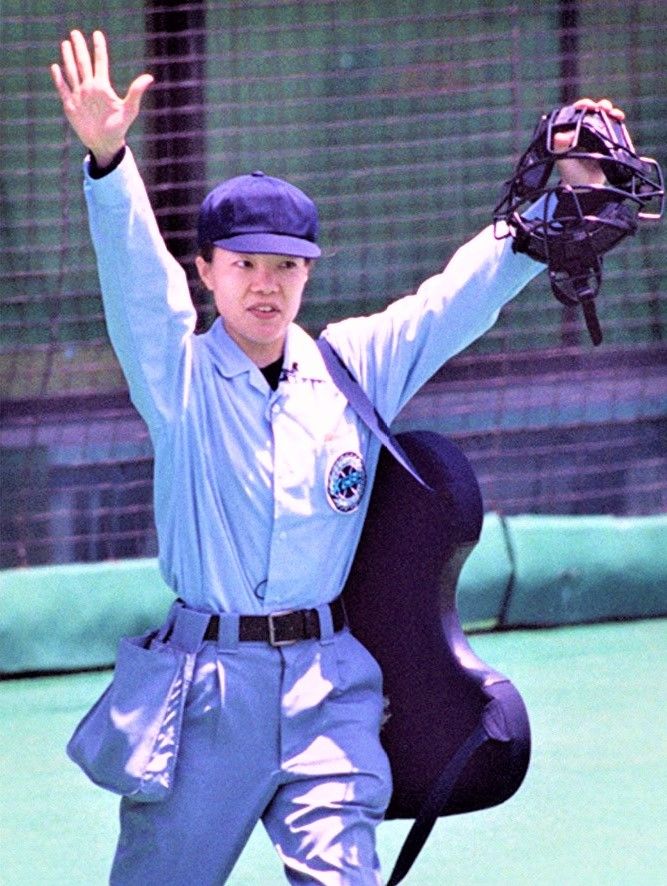 Rugby, another sport long dominated by male referees, has a small lead on soccer and baseball in welcoming female officials.

In 2016, Takahashi Mayumi was one of two women selected as A class referees under a new licensing system introduced by the Japan Rugby Football Union. Then in 2017, she became the first woman to officiate in a Top League match, then Japan’s premier professional rugby competition, when she served as assistant referee in a game between Toshiba and NTT.

Female Referees at the Olympics

Male referees have long dominated amateur sports, but this too is slowly changing. For instance, in jūdō, one of Japan’s original martial arts, there is growing momentum to broaden opportunities for female referees amid efforts to achieve gender equality in the sport. In line with this, in 2017 three female referees were appointed for the first time to officiate at the Japan national jūdō championships.

A similar trend is underway at international competitions. At last year’s Tokyo Olympics, 5 of the 16 jūdō referees were women. Amano Akiko was the only Japanese national, either male or female, selected to umpire matches. It was her second time to officiate at the Olympics after her first outing at the Beijing Games in 2008, where she was one of only two women included in the group of 24 referees. The ratio of female referees has increased significantly in the years since Amano debuted on the international stage, illustrating clear momentum toward promoting the advancement of women.

Amano officiated 37 jūdō matches at the Tokyo Olympics, including the opening match and the final of the men’s open weight class. The fact that she officiated both the first and last events seems symbolic of the inroads women have made in the world of jūdō refereeing. 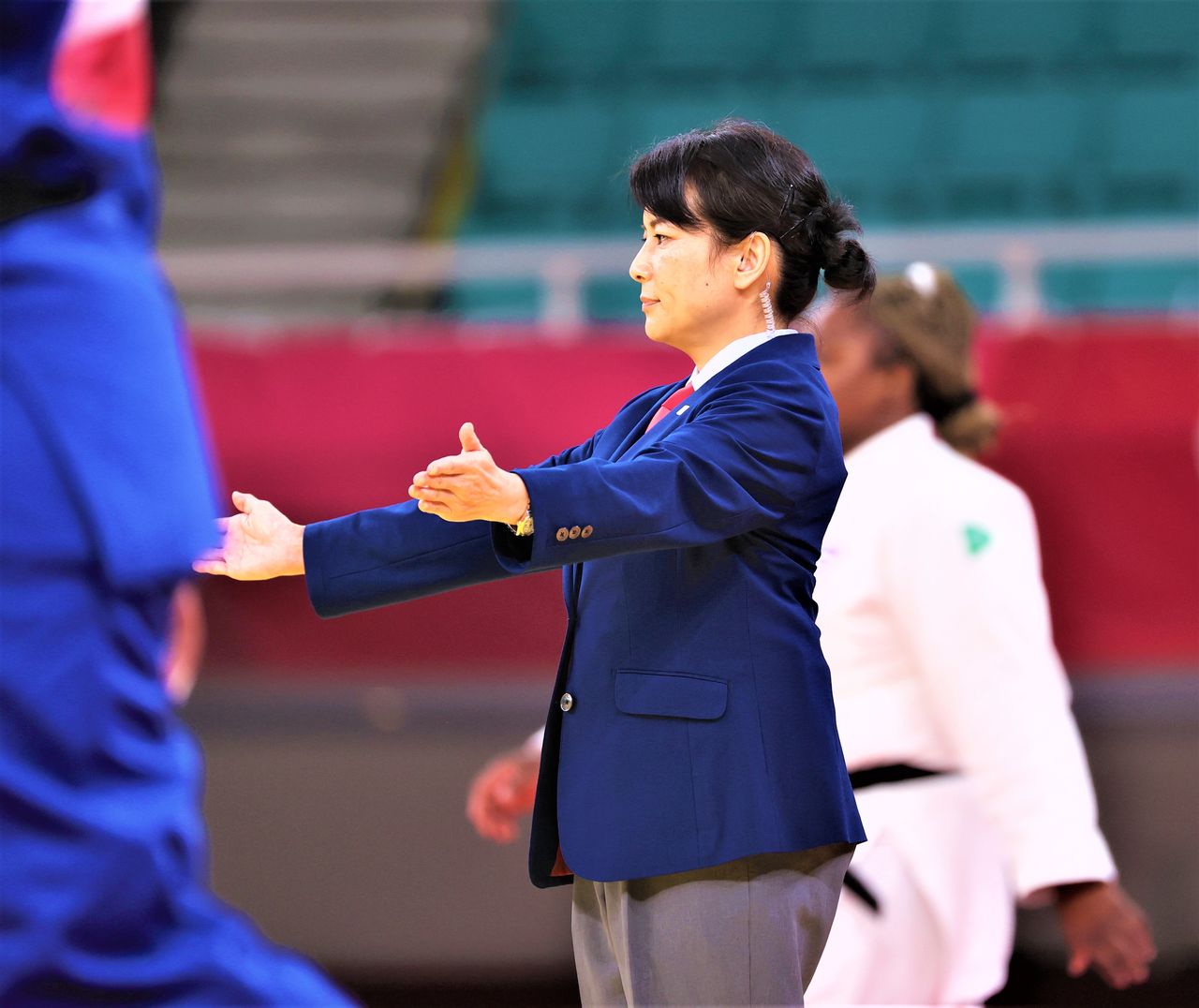 Amano Akiko officiates at the2020 Summer Olympic jūdō competition at Tokyo’s Budōkan on July 30, 2021. Along with being a seventh dan, she is also the fifteenth-generation head of a traditional fireworks maker Kagiya. (© Jiji)

Wrestling has a long history in the Olympics. But while Japanese wrestlers have been dominant forces in the women’s competition, there are only 8 female referees compared to 209 male umpires qualified to oversee matches at the Japan national championships. Likewise, there are still only a handful of female referees involved in international wrestling events, although this situation is expected to change as the number of female officials grows.

There has been talk of dropping wrestling from the Olympics due to its waning popularity, an outcome that international governing body United World Wrestling is eager to avoid by promoting greater gender equality in a bid to enhance its reputation with the International Olympic Committee.

The perception that women are less capable than their male counterparts at refereeing because they lack the needed strength or stamina—as was once the view in soccer—is fast fading, thanks in large part to the efforts of pioneering women and growing awareness of the need for gender equality. The door is opening, wider and wider.

The FIFA World Cup in Qatar is expected to lead to increased opportunities for women to play an active role in domestic and international soccer competitions around the globe, reflecting a trend that is certain to spread to other male-dominated sports. It is not yet known which matches the six female officials will oversee at the World Cup, but the whole world will be watching as they display their skills on the pitch.

(Originally published in Japanese. Banner photo: Yamashita Yoshimi makes her debut as the J. League’s first female head referee in a J1 game at the Japan National Stadium in Tokyo on September 18, 2022. © Jiji.)