Culture May 11, 2017
Tokyo, a city known for its high tech and blazing neon, still has traditional inns tucked away in its back streets that can provide travelers with comforts from an older age. A night at one of these establishments is a great way to top off a long day of seeing the sights. Photographer Andō Seita takes us on a tour of five ryokan that offer guests distinct ways to experience the metropolis.

A More Intimate Way to Stay

The photographer Andō Seita is something of an expert on the quaint charms of Tokyo’s many ryokan, or traditional inns. Having spent three years training his camera lens on these small establishments and compiling his efforts into the 2016 Japanese guide book Tokyo no sugoi ryokan (Tokyo’s Amazing Ryokan), he laments that many visitors to the capital by default choose standard accommodations, blissfully unaware they are missing out on an engaging way to enjoy Japan’s largest city. “If you travel all the way to Tokyo,” Andō asks, "why stay at a bland business hotel when you can have a one-of-a-kind experience at a ryokan?”

Below Andō introduces five traditional inns that will add a new layer of enjoyment to any trip to the metropolis. 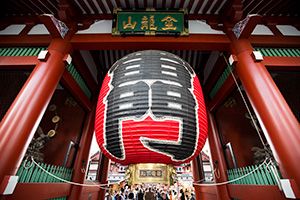 The Asakusa district is one of Tokyo’s top tourist destinations, offering up a smorgasbord of traditional architecture, cuisine, and entertainment. Andō confidently states that visitors to the area are guaranteed to have a great time. However, he warns, “Once visitors return to a nondescript hotel near some hub station, the excitement of the day will quickly begin to fade.” Instead, he says travelers should top off a day wandering the lively and historic district with a night at a local ryokan, saying that “sliding into a futon in a tatami-matted room is the perfect way to keep the spirit of a day in Asakusa, or indeed any of Tokyo’s authentic locations, alive.” 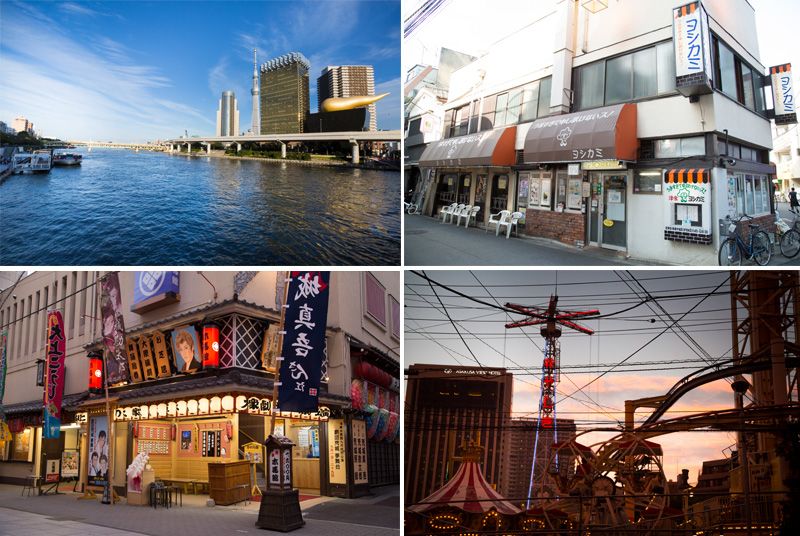 Clockwise from top left: A water bus terminal on the Sumida River across from the iconic Asahi Beer Hall and Tokyo Skytree; Yoshikami, one of many cozy eateries around Asakusa; dusk at Asakusa Hanayashiki, Japan’s oldest amusement park; the historic Mokubakan theater has been in business since the Meiji era (1868–1912).

Andō says he could easily recommend any number of ryokan in Asakusa, but that Mikawaya tops his list for the spectacular views it provides of the Nakamise shopping arcade in front of the temple Sensōji and Tokyo Skytree, two of the area’s landmark attractions.

When completed in 2012, the 634-meter Skytree added a pleasing, modern accent to Asakusa’s historic scenery that includes Nakamise’s busy shops and the Buddhist temple of Sensōji. Guests at Mikawaya can leisurely admire the towering structure, which dominates the neighborhood skyline, while relaxing in one of the cozy, traditional ryokan rooms. 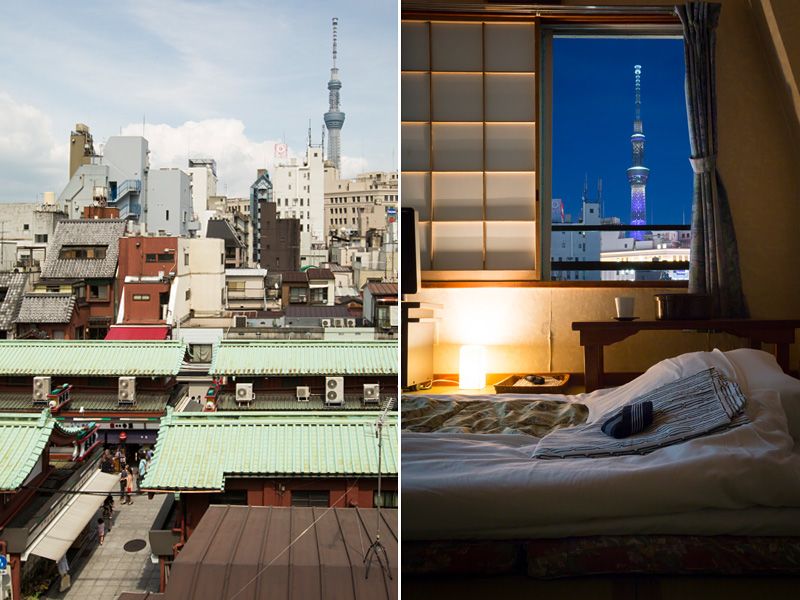 The afternoon view from Mikawaya’s room 405 overlooks Nakamise (left); guests in room 403 can admire the evening glow of the Skytree while relaxing in their futon.

To enjoy the view to its fullest, Andō insists that Asakusa’s streets must be strolled at night. “Skytree is at its best when the sun goes down. The lights of Nakamise are also nice. By staying in Asakusa, guests can wander the streets after hours savoring the view amid the wonderful calm that settles over the neighborhood after all the tourists have gone.”

Mikawaya set out to actively court foreign visitors beginning with the 2002 FIFA World Cup, which was cohosted by Japan and South Korea. The inn is looked after by an experienced and attentive okami, or hostess, who diligently cares for guests. Although the establishment lacks a large bathing area, just a short walk away is Jakotsuyu, a public bathhouse founded in the Edo period (1603–1868) that boasts natural hot spring waters. In fact, guests will find that strolling back to their rooms after a relaxing soak adds a whole new dimension to the Asakusa experience. 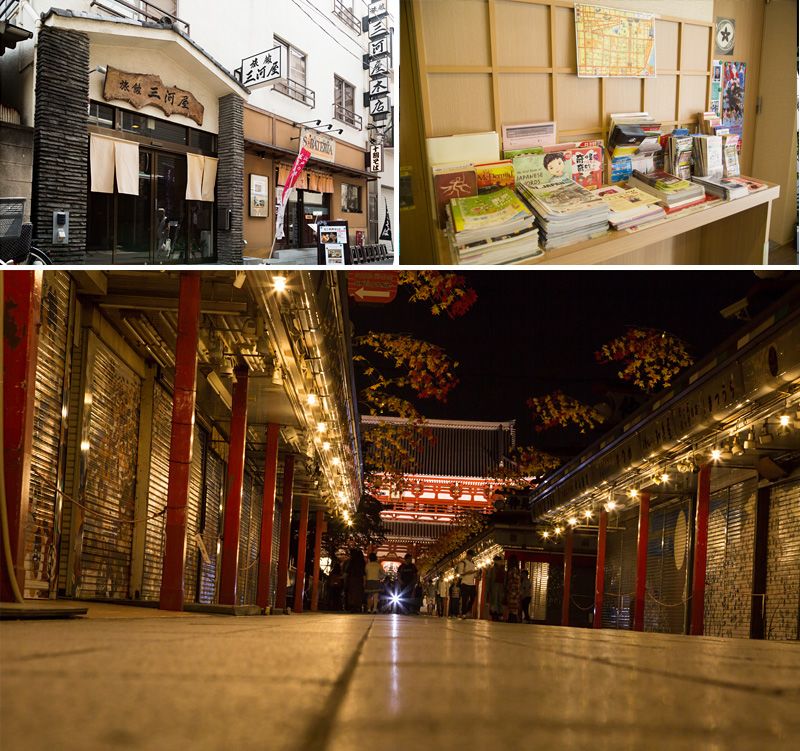 Clockwise from top left: The exterior of Mikawaya; the ryokan’s lobby is stocked with travel guides and other tourist information; Nakamise presents a strikingly different face after the crowds have left. 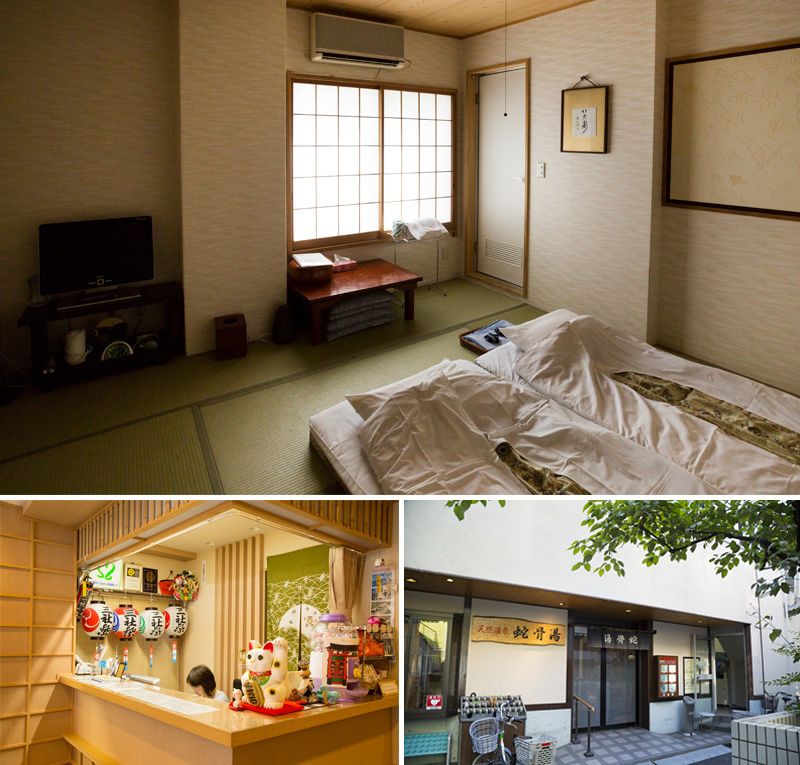 Clockwise from top: A room at Mikawaya; the entrance of Jakotsuyu, a bathhouse in business since the Edo period; lanterns from Asakusa’s famous Sanja Festival decorate the front desk.

For fans of Akihabara, Tokyo’s hub for electronics and otaku culture, Andō recommends Edoya in the Yushima neighborhood. “The area is a wonderful mix of modern and historic. Guests can head to Akihabara for the latest in pop culture and electronics and then wander the back streets of Yushima to catch a glimpse of the Japan of yesteryear.” 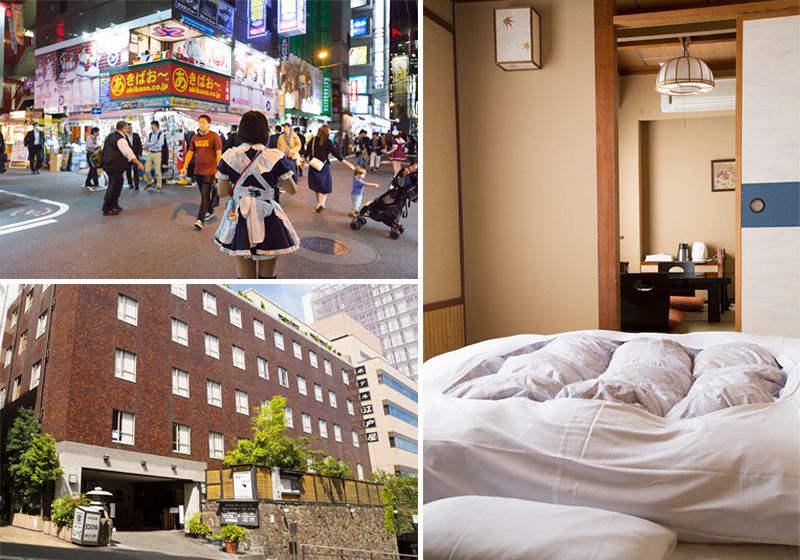 Yushima is a 10-minute walk from the hustle and bustle of Akihabara and is home to a number of well-known sites, including two of Japan’s most venerable shrines to scholarly learning. “The area offers a good balance of study and pleasure,” explains Andō. “Students come to Akihabara to enjoy some downtime browsing for anime goods or to visit a maid café, and then during test season they head to Yushima Tenjin or Yushima Seidō to ask for divine assistance in passing their exams.” 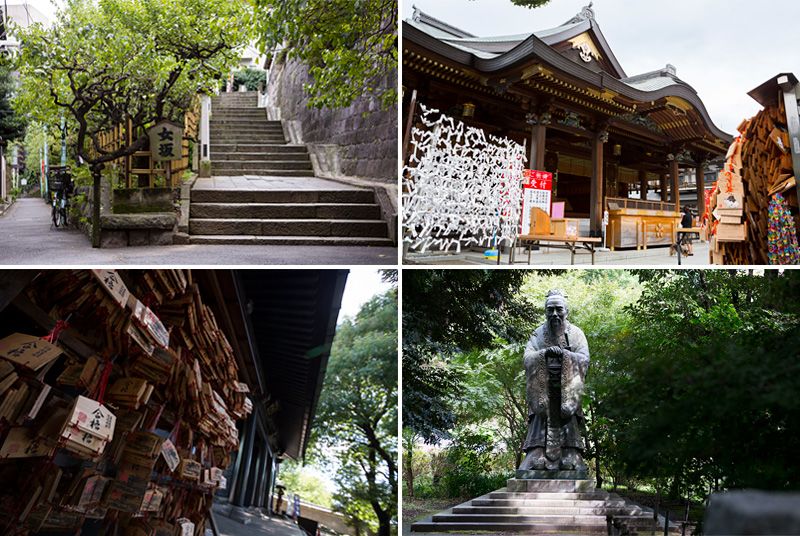 The revered Kanda Myōjin is also located within easy walking distance. During the Edo period this shrine enjoyed official patronage, and its raucous festival was of such importance that the government designated it a state event. Visitors can try a cup of the shrine’s special amazake, sweetened sake believed to help improve digestion, relieve fatigue, and moisten and treat skin. A glass may also provide a welcome pick-me-up to road-weary travelers. 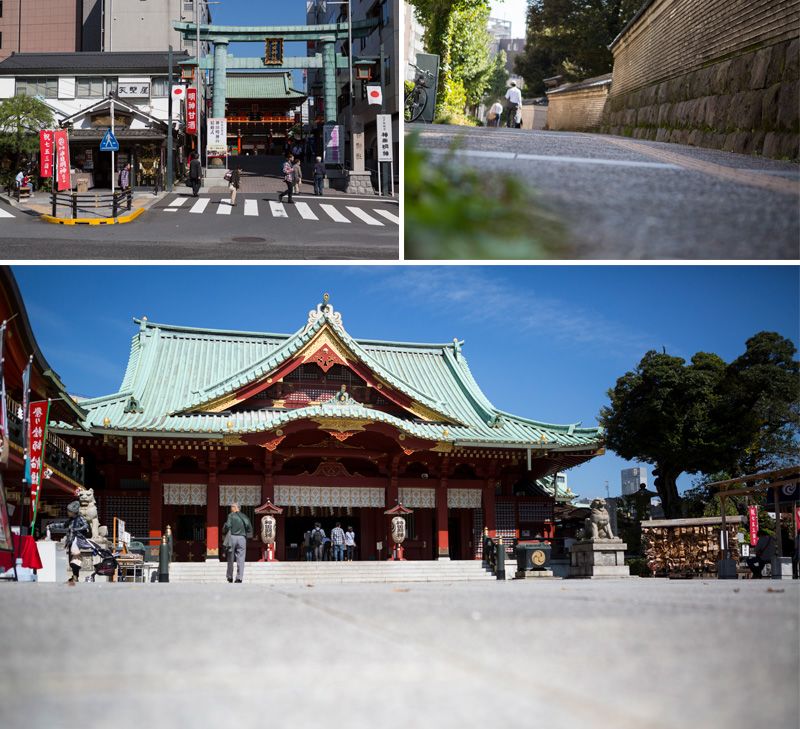 Clockwise from top left: Amanoya near the entrance of Kanda Myōjin has been serving amazake for generations; the historic lane Shōheizaka runs near Kanda Myōjin and Yushima Seidō; the main hall of Kanda Myōjin.

After the vibrant atmosphere of Akihabara and quiet lanes of Yushima, travelers can retire to the old-time feel of Edoya to relax and refresh in the ryokan’s outdoor bath, a rare pleasure in Tokyo. The tranquil atmosphere of the inn has helped make it a popular base for visitors to the metropolis. 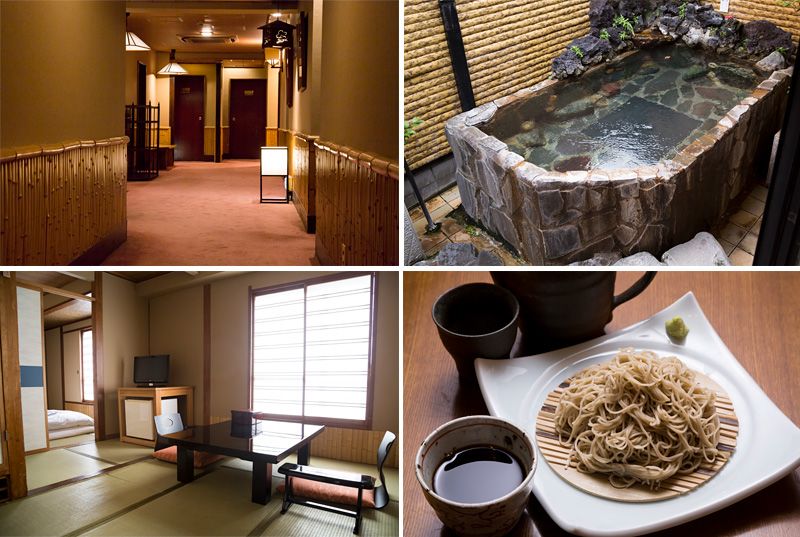 A Home away from Home

For visitors wanting to try a tatami-matted room or experience first-hand the Shōwa-era (1926–89) feel of an Ozu Yasujirō film or episode of Doraemon, Andō points them toward the Bamba Hotel near Shinbanba Station in Shinagawa. The cozy, 70-year-old home accommodates one group per evening and offers what Andō describes as “the best way to experience the nostalgic air of the postwar period.”

The Shinbanba area sits along the ancient Tōkaidō highway and was once part of the Shinagawa post station, the first stop for travelers heading west to Kyoto from the old capital of Edo (now Tokyo). It is near Shinagawa Shrine, a Shintō sanctuary dating from the Kamakura period (1185–1333), and is a stone’s throw from Haneda International Airport. 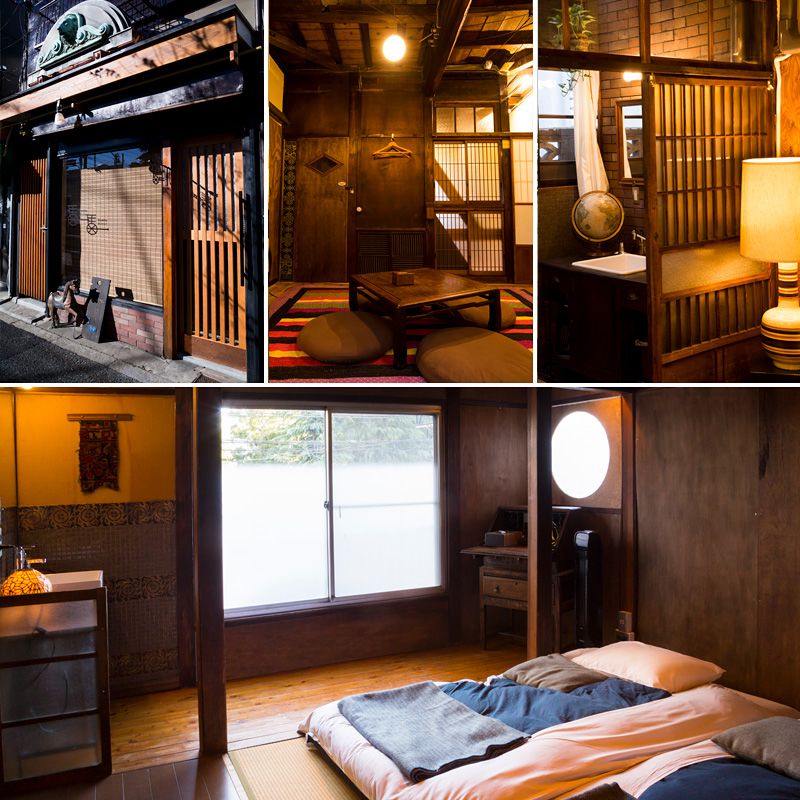 Clockwise from top left: The exterior of the Bamba Hotel; the living room is furnished with a traditional low table and zabuton cushions; the inn is outfitted with a wide array of antiques; guests sleep in futons laid out on tatami matting.

Location: Minami-shinagawa 1-1-2, Shinagawa, Tokyo
Website: http://47gawa.tokyo/bamba/en/
Access: One minute from Shinbanba Station on the Keikyū Line
Tel.: 070-5566-9441
Rates: From ¥22,680 for up to three guests (breakfast included)
Note: Contact the ryokan in advance when booking for six or more guests or when staying with children.

A Certified Touch of History

Aficionados of traditional Japanese architecture will certainly want to stay at Hōmeikan. Built in 1905, the Meiji-era building was registered as an intangible cultural property in 2000. “There are few ryokan in Tokyo that offer such a rich, historical experience,” explains Andō. “The interior has remained largely unchanged for over 70 years, allowing guests to literally step back in time.”

The inn started out as a guesthouse catering to students of the old Imperial University, the predecessor of the University of Tokyo, and was built by skilled carpenters using the finest wood. The proprietor has worked to grow the ryokan’s online presence and as a result has seen an uptick in foreign guests coming to enjoy the old-time feel of the establishment. 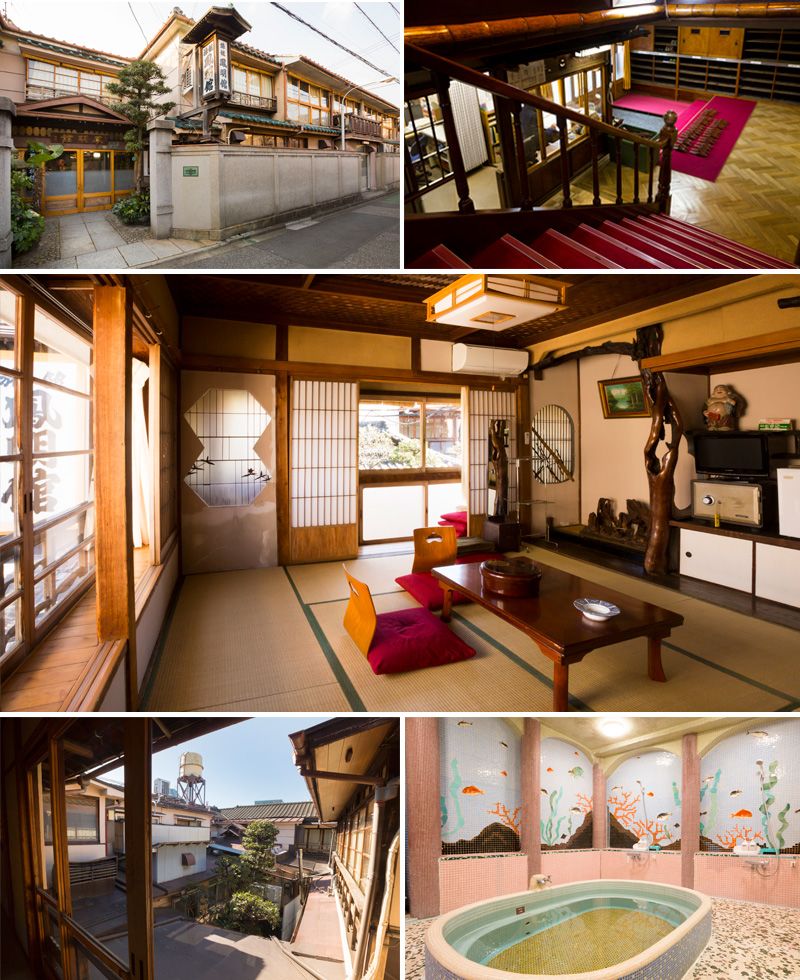 The entrance of the Hōmeikan and the spacious lobby (top); the intricate woodwork in one of the guest rooms (center); the central garden seen from a room and a communal bathing area’s pleasingly tiled interior (bottom).

Designer Feel with a Touch of Tradition

To those who may feel hesitant about jumping straight into the deep end of traditional accommodations, Andō suggests first dipping their toes at the Andon Ryokan. Fashioned as a Japanese-style “designer” inn, the establishment opened in 2003 in the well-preserved shitamachi district of Minamisenju.

Although the ryokan is in an older and more traditional part of Tokyo, Andō notes: “The owner had foreign tourists in mind and put a lot of effort into making both the exterior and interior very fashionable.” One such touch is a bathing area decorated with a mural made from Arita porcelain tiles and equipped with a whirlpool bathtub.

The inn also offers guests the opportunity to join a different cultural lesson each day, including the tea ceremony, Japanese flower arrangement, and sushi making. For visitors hoping to just relax, however, there is also a rooftop space overlooking the surrounding cityscape. 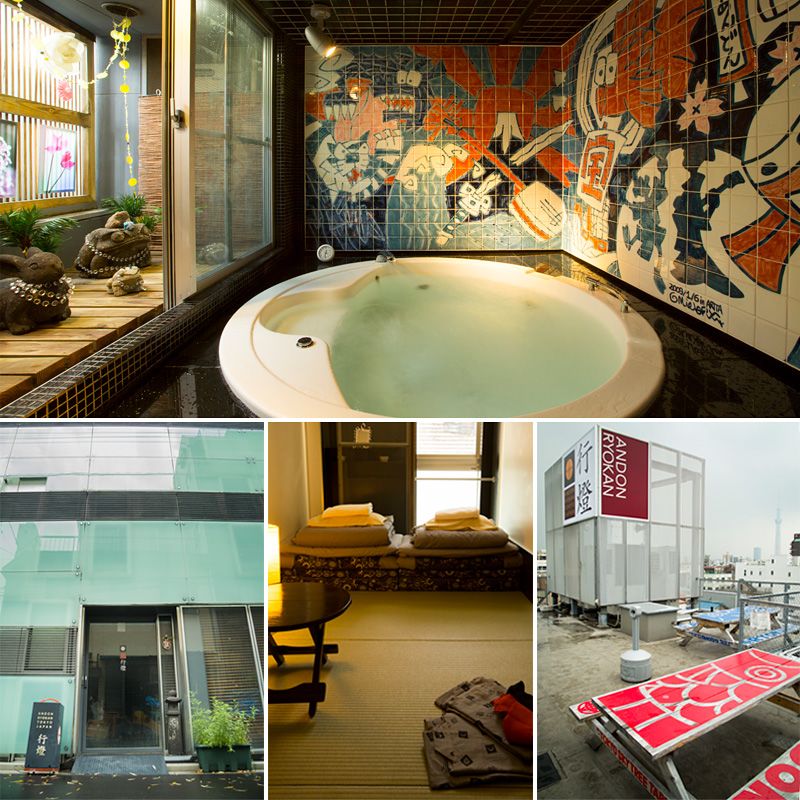 Andō’s book Tokyo no sugoi ryokan, text by Iwashita Nobuaki and Sugiyama Shigetoku, is published in Japanese by Aspect and costs ¥1,500 plus tax. It features 21 distinct ryokan around Tokyo.

(Originally published in Japanese on December 16, 2016. Photos by Andō Seita.)