A Capsule History of the Japanese Tattoo

Culture Jan 30, 2017
Prized as the epitome of urban cool in the Edo period and outlawed as backward during the Meiji era, tattooing has had a checkered history in Japan. Cultural anthropologist Yamamoto Yoshimi provides a brief survey of irezumi from ancient times to the present.

Tattooing, the insertion of pigment into the skin to apply permanent patterns, symbols, or images, is one of the world’s oldest and most widespread forms of body modification. As with such practices as circumcision, foot binding, and neck lengthening, its precise origins are unclear. But there is considerable evidence that tattooing in Japan, known as irezumi, goes back to prehistoric times.

The incised decorations on the dogū and haniwa figurines excavated from paleolithic and neolithic sites in Japan are seen by many as evidence that the custom of tattooing was practiced by the Japanese before the dawn of history. In remote areas, the custom continued until modern times.

Women from the Amami Islands to the Ryūkyūs (present-day Okinawa) wore hajichi, a kind of tattoo applied to the hands and, in some cases, from the fingertips all the way to the torso. The earliest records of this practice date to the sixteenth century, but it is assumed that the custom itself goes back much earlier. It seems to have been associated with rites of passage; tattoos on the hands indicated a woman’s married status, and completion of the tattooing process was celebrated as an auspicious event. The precise shapes of the tattoos and the areas of the body covered varied from island to island. In some locales it was believed that a woman without proper hachiji would suffer in the afterlife.

Among the Ainu people of the north, women commonly wore tattoos around their lips and on their hands. Indeed, it seems likely that at one time tattooing was fairly common throughout Japan. The earliest accounts of Japan’s mythic origins, the Kojiki (Record of Ancient Matters; 712) and the Nihon shoki (Chronicle of Japan; 720), mention tattooing as a custom or punishment practiced in outlying regions.

However, by this time the custom was dying out. Around the middle of the seventh century, ideals of feminine beauty underwent a major change. Generally speaking, the emphasis shifted from the body itself to the impression conveyed by clothing and perfume, which could be appreciated in a dimly lit room. Tattoos gradually fell out of favor on the Japanese mainland, and by the early seventeenth century, they disappear entirely from contemporary written and pictorial records.

After the upheavals and conflicts of the Warring States period, Japan finally achieved lasting social stability under the Tokugawa shogunate. It was during this era, known as the Edo period (1603–1868), that tattooing experienced a major revival in Japan.

The earliest references to body modification in this era relate to courtesans of the pleasure quarters and their favored clients, who are said to have pledged their eternal love by incising the lover’s name in their skin—or in some cases by severing a little finger.  Such tokens of undying loyalty were subsequently embraced by the bands of gamblers and other underworld groups that emerged during the eighteenth century.(*1)

Tattoos also made steady inroads among men involved in specific trades, particularly hikyaku, or express couriers, and tobi, or steeplejacks. For ease of movement, these urban tradesmen often tied back or removed their outer garments, in some cases stripping down to a simple loincloth. For them, tattooing was an alternative means of concealing and adorning their bare skin.

The tobi were agile climbers who worked in construction and played a key role in preparations for festivals and other public events, as well as in neighborhood policing and firefighting. In time, tattoos became so integral to the tobi’s image and identity that wealthy community leaders would defray the cost of providing the young tobi in their neighborhood with tattoos. This was partly a matter of civic pride. The daring, agile steeplejacks who demolished wooden structures to prevent fires from spreading were considered the embodiment of iki—a casual, dashing air associated with the urban culture of Edo (present-day Tokyo). Skilled, stylishly tattooed tobi were the pride of the neighborhood. Dragon tattoos were favored as a kind of talisman, possibly because dragons were traditionally believed to bring rain.

In this environment, tattoos evolved from simple characters and symbols into larger and more elaborate images. This in turn created a demand for professional tattoo artists, or horishi, with increasingly sophisticated skills. 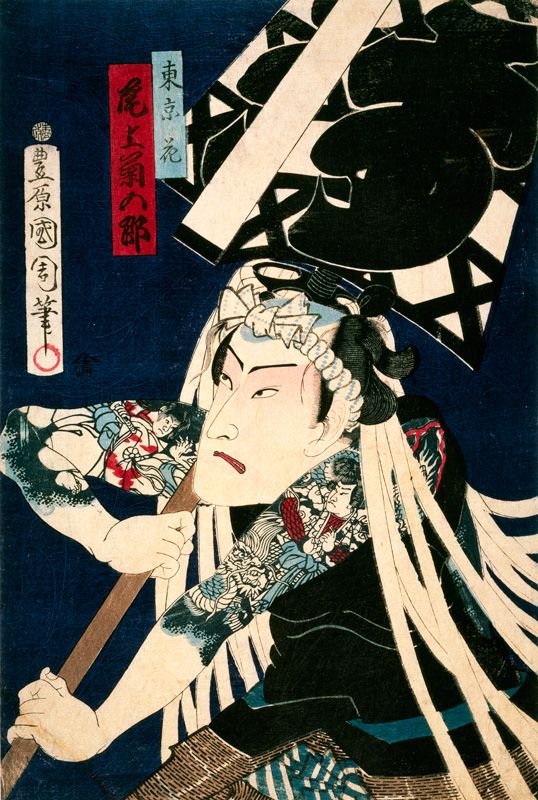 An image of kabuki actor Onoe Kikugoro V from the ukiyo-e series Azuma no hana (Flowers of Tokyo) by Toyohara Kunichika.

Tattoos were also closely linked to real and fictional underworld figures, including the so-called kyōkaku, sometimes translated as “chivalrous commoners” or “street knights.” Kyōkaku figured prominently in the popular culture of the Edo period as outlaw heroes who protected the weak and innocent from the powerful and corrupt. In popular illustrations, irezumi appear as one of the distinctive attributes of these romantic figures, and this heightened the tattoos' appeal. In the first half of the nineteenth century, the ukiyo-e artist Utagawa Kuniyoshi portrayed some of the outlaw heroes of the classic Chinese novel Shui hu zhuan (Water Margin) with full-body tattoos. The series was a huge hit, and soon other artists, such as Utagawa Kunisada, capitalized on the fad with prints that portrayed popular kabuki actors displaying tattoos. By the 1860s, leading kabuki actors were appearing in kimono dyed with tattoo-like patterns as they starred in such plays as Kawatake Mokuami’s Aoto zōshi hana no nishiki-e (The Glorious Picture Book of Aoto’s Exploits), about a band of honorable thieves. 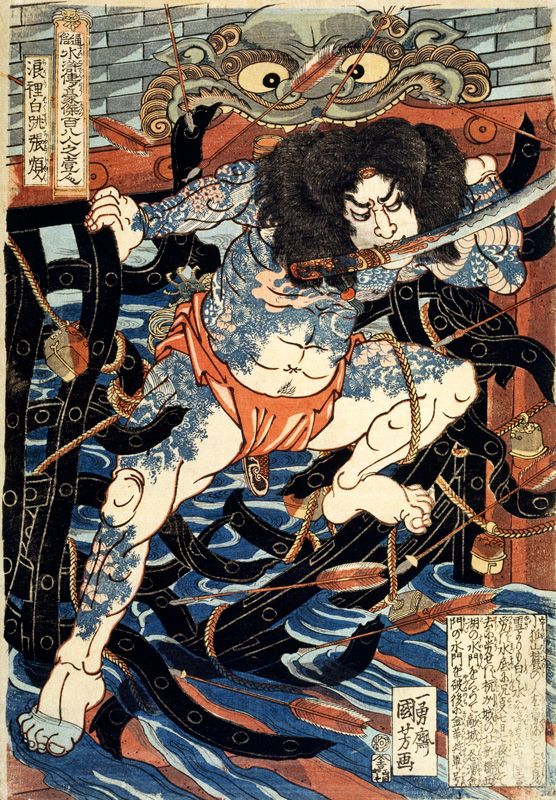 In his popular woodblock print series Tsūzoku Suikoden (Popular Water Margin), illustrating a well-known Chinese novel, Utagawa Toyokuni depicted some of the story’s outlaw heroes with tattoos, as in this image of Zhang Shun.

Thanks in large part to the influence of ukiyo-e and kabuki, the trend toward ever larger and more elaborate tattoos accelerated during the nineteenth century, culminating in the full-body tattoo.

It should be noted that tattooing never took hold among the ruling warrior class, partly because the samurai were bound by Confucian strictures against causing injury to one’s own body. In addition, many commoners considered the practice distasteful or disreputable, particularly since criminals were sometimes punished by the application of tattoos to their arms or forehead (a practice begun in 1720). The Tokugawa shogunate periodically issued decrees limiting tattooing, but they had little effect. The boom peaked in the second half of the nineteenth century.

With the collapse of the shogunate and the Meiji Restoration of 1868, the new government set about building a modern state on a par with the industrial nations of the West. After over 200 years of semi-seclusion, Japan had finally opened its doors to the world, and foreign dignitaries, travelers, and seamen were visiting Japan in substantial numbers. Accounts by these travelers tended to highlight aspects of Japanese society that Westerners of the Victorian era found exotic or shocking, such as mixed-sex public bathing or the sight of men walking about town virtually naked with full-body tattoos.

Fearful of fueling perceptions of Japan as a backward nation, the Meiji government banned both the giving and the receiving of decorative tattoos in 1872. The law did not end tattooing among those sectors of society where it was firmly entrenched. But in combination with emerging norms against public nudity, it did drive irezumi into hiding. By the beginning of the twentieth century, Japanese tattoos had retreated completely beneath layers of clothing. Ironically, this state of affairs may have helped strengthen the mystique of irezumi as something beautiful yet hidden from common eyes, and all the more spiritually charged for that reason.

Among the Ainu of the north and the Ryūkyū people of Okinawa, meanwhile, the impact of the tattoo ban was decisive. The women were obliged to abandon a custom that was part of their cultural heritage. For a while, some continued to get tattoos in secret, but the authorities were not beyond arresting people for following this “barbaric and backward” custom. Tattoos were removed surgically or with hydrochloric acid. Today, the custom and its last traces have disappeared completely from both cultures.

Despite the Meiji government’s intolerance toward irezumi, Japanese horishi were internationally renowned for their skill, and visitors to Meiji Japan were known to seek them out and get exotic tattoos as souvenirs of their visits. Prince George, later George V of England, and Nicholas Alexandrovich, later Nicholas II of Russia, are both said to have received irezumi during their sojourns in Japan. American and British newspapers piqued the public’s curiosity with accounts by sailors and travelers of their Japanese tattooing experiences. It was not long before Japanese tattoo artists responded to this interest by taking their business overseas.

Since tattooing was illegal in Japan, the horishi were forced to set up shop as sign painters or lantern makers and do their tattooing in back rooms, away from the scrutiny of the police. In response, some ended up leaving Japan in search of greater professional freedom, emigrating to places like Hong Kong, Singapore, the Philippines, Thailand, India, Britain, and the United States. The activities of these emigré horishi have been brought to light in recent years by the work of Koyama Noboru, as well as my own research.

Because tattoos were in particular demand among sailors and other seafaring men, Japanese tattooists often worked out of rented rooms near seaports. Some of them traveled quite extensively during the course of their careers. In 1899, a well-known tattoo artist by the name of Horitoyo Yoshisuke told a reporter for the New York Herald how he had journeyed to many of the world’s capitals and tattooed European royalty. On the whole, however, the emigré horishi must have found their work somewhat dull. While their skills were appreciated, the vast majority of customers were satisfied with the kind of small, simple tattoo that could be completed in a single session. There was little demand for expansive, elaborate irezumi requiring multiple sittings. 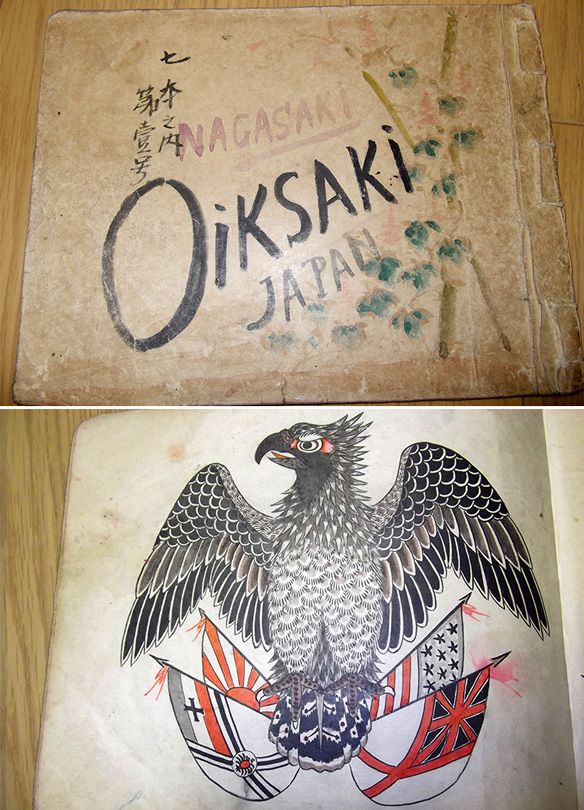 Emerging from the Shadows

Japan’s legal prohibition against tattoos was completely lifted in 1948 under the US occupation that followed World War II. With US military bases springing up around Japan, Japanese tattooists began catering to American servicemen, particularly around the naval base at Yokosuka. Although the demand was overwhelmingly for Western designs, the Yokosuka tattooists did a thriving business, especially during the Korean and Vietnam wars. 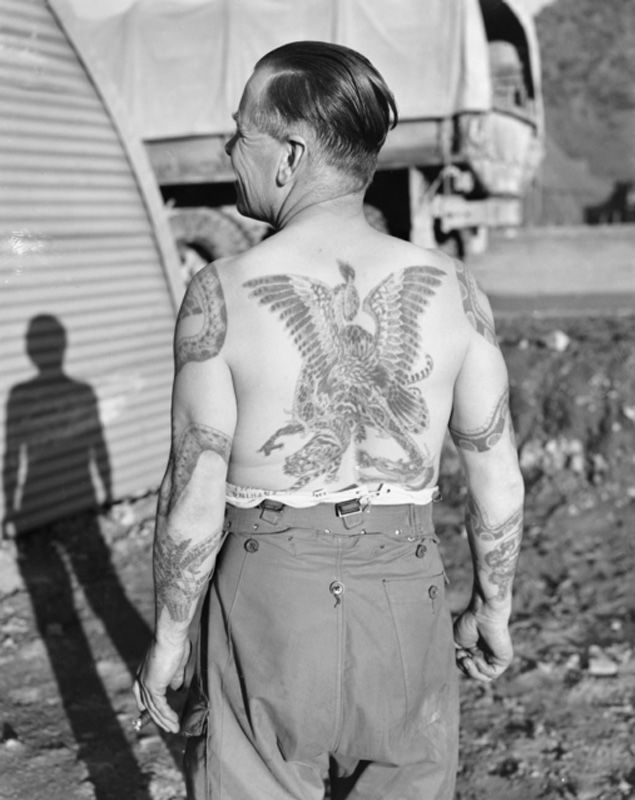 An Australian serviceman photographed in South Korea in December 1953. He claimed to have gotten his tattoos in Egypt, England, Hong Kong, and India, as well as Japan. (Australian War Memorial, Campbell, Australia)

However, it was not until the 1970s that Japan's horishi really began to emerge from the shadows with the appearance of books and exhibitions devoted to their art. It was during this period that Japanese designers Issey Miyake and Yamamoto Kansai came out with fashions inspired by traditional irezumi. In the 1980s, tattooing took hold among popular American and British rock bands, and their influence led to a surge of interest among Japanese youth. Eventually, as the popularity of tattooing spread, young Japanese people rediscovered the appeal of traditional Japanese irezumi. 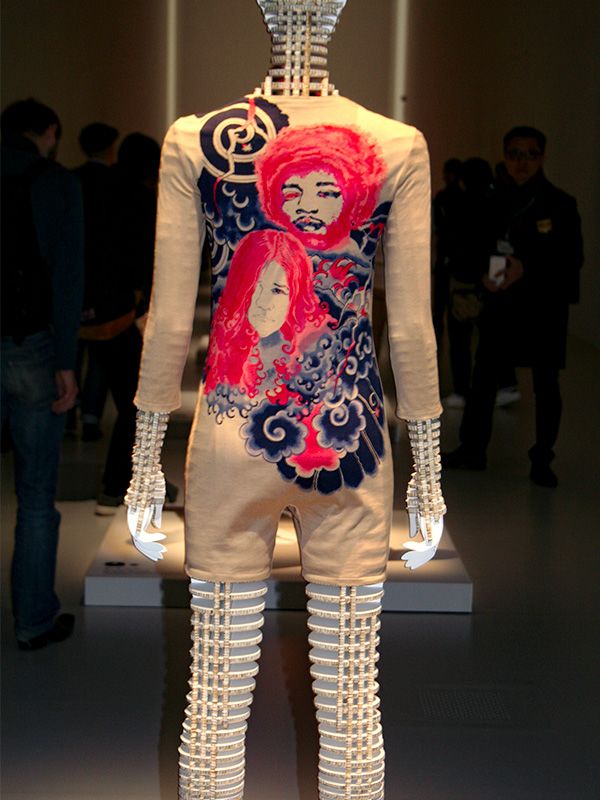 In 2014, members of the Kantō Federation of Bar Associations conducted a questionnaire survey of 1,000 men and women aged 20–60, chosen at random, and found that 16 had tattoos. This rate is still low by comparison with most Western nations, where it ranges between 10% and 25%. Still, it indicates a growing social acceptance of irezumi as a fashion statement in the country that elevated the art of the tattoo to a level that has never been surpassed.

(*1) ^ A later Nippon.com article will explore the connections between tattoos and the modern-day yakuza.—Ed.