Japan-Surfing the Web: The Top Internet Keywords of 2018

Society Dec 28, 2018
Internet giants Google and Yahoo announced their top search terms of 2018. We take a look at the personalities, places, and products that people around Japan sought out on the web.

On December 12, Google announced its 2018 Year in Search, a rundown of its top global and regional keywords. In Japan, soccer’s premier event held in Russia in June made “World Cup” the most searched term. “Olympic” came in second, bolstered by interest in this year’s Pyeongchang Winter Olympics and the upcoming 2020 Summer Games in Tokyo. This term “typhoon” again ranked high, finishing third in the wake of several major storms that pounded Japan this year, including Typhoon Jebi, which shut down Kansai International Airport.

The list of Japanese search terms used with to wa (meaning “What is,” often used when trying to find the meaning of a word of phrase) was headed by kasō tsūka (cryptocurrency), which gained attention after hackers heisted ¥58 billion in NEM tokens in January and ¥7 billion in other virtual currencies in September. In second place was kaiki gesshoku (total lunar eclipse), a rare celestial event that in 2018 was visible twice in Japan, producing a “super blue blood moon” on January 31 and “blood moon” on July 28. Bittokoin (Bitcoin) rounded out the top three.

Cryptocurrency was on Japanese web-surfers’ mind when they combined searches with the term shikumi (meaning “how does . . . work”), with the terms kasō tsūka, bittokoin, and burokku chēn (block chain) ranking first, second, and third, respectively.

In rankings by prefecture, jishin (earthquake) was most paired with searches for Hokkaidō, Kyoto, and Osaka. In June a 6.1-magnitude temblor centered in north Osaka rocked the city, and in September a 6.7-magnitude tremor rattled Japan’s northmost island. Interest in the Akita and its Akita-inu breed of dog skyrocketed when a group in the prefecture presented a puppy to 16-year-old Russian figure skating Olympic gold medalist Alina Zagitova.

Idol group King & Prince took the grand prize. The six-member boy band, a merger of two separate units managed by major talent agency Johnny & Associates, debuted to much fanfare in May with its single “Cinderella Girl.”

This year’s prize saw a special category for top trending figures born in the Heisei era, which began on January 8, 1989, and will end on April 30, 2019, when Emperor Akihito hands the Chrysanthemum Throne to his son, Crown Prince Naruhito. Two-time Olympic champion in figure skating Hanyū Yuzuru was named in the men’s category, and US Open tennis winner Ōsaka Naomi took the prize for women. 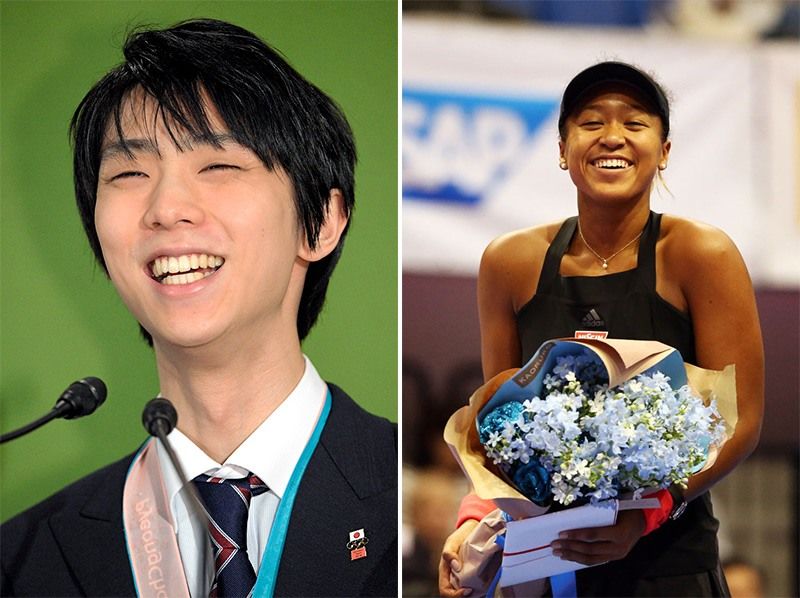 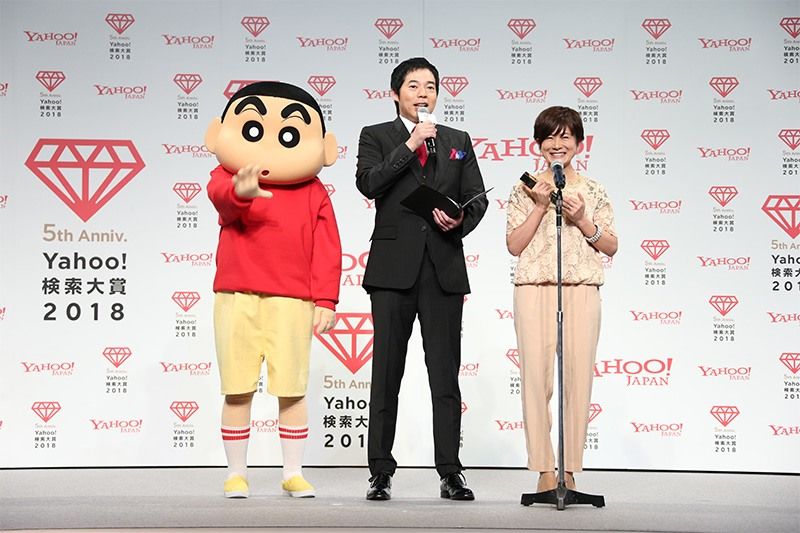 Voice actor Kobayashi Yumiko (right), receives her award with a real-life rendition of Nohara Shinnosuke, the star of long-running anime Crayon Shinchan, whom she voiced for a movie released in July 2018.

(Originally published in Japanese. Banner photo: Yahoo prizewinners [from left] Yabe Tarō, Kobayashi Yumiko, Nakamura Tomoya, Imada Mio, and Hyokkori-han line up at the podium at a ceremony in Tokyo on December 5, 2018. © Jiji.)