Society Oct 1, 2018
As individual consumers turned away from the once-prized Fukushima rice after the 2011 nuclear disaster, the drop in price brought an uptake in purchasing from the commercial sector.

Sales of rice grown in Fukushima Prefecture have been shifting from individual toward commercial users. Prior to the 2011 nuclear disaster, around 75% of all rice was shipped to wholesalers or retailers in 2008, but by 2015 that proportion had fallen to 37.4%. Meanwhile, the supply of Fukushima-grown rice for pre-cooked meals and other prepared items eaten at home has risen from almost nothing prior to the disaster to now account for 37% of all shipments. 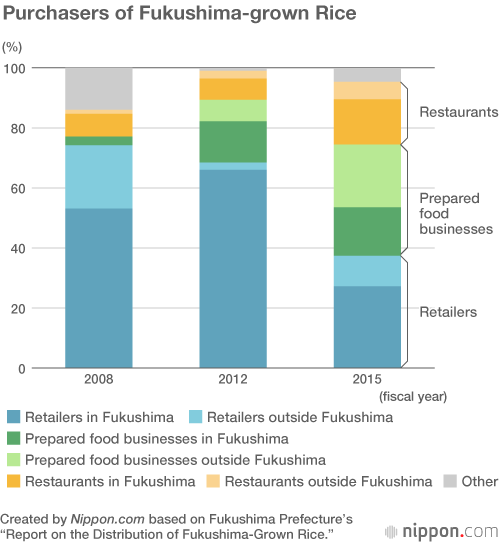 Agriculture in Fukushima suffered a heavy blow immediately after the disaster that struck the Fukushima Daiichi Nuclear Power Plant in 2011, including the halting of shipments of agricultural products with radiation levels exceeding Japan’s regulatory limits. A 2017 survey by the Ministry of Agriculture, Forestry, and Fisheries found that Fukushima rice pulled from retailers’ shelves after the disaster has not returned as a regularly sold item, even though almost no rice grown since 2012 has exceeded the radiation limits.

The survey questioned 997 consumers nationwide about their inclinations for rice purchases. Around 25% said that they were either willing to purchase Fukushima rice if the price were the same or even higher than rice from other prefectures or that the rice they purchased most frequently is from Fukushima Prefecture. But 13.1% said they would not purchase rice from the prefecture unless there were no other option, reflecting the persistence of deep-rooted concerns about the safety of rice grown there. 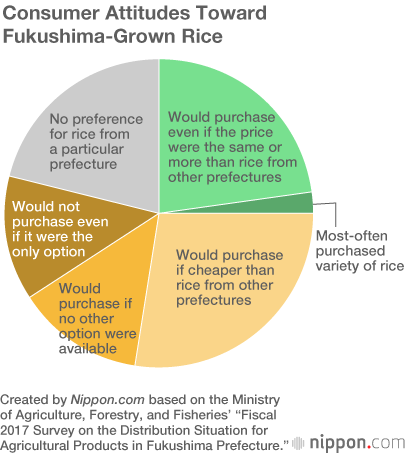 Demand for Fukushima-grown rice rose, however, among the price-conscious restaurant and prepared-food sectors as a result of the steady drop in price, compared to the national average, that continued up to the 2014 crop. Many businesses chose to add Fukushima-grown rice to the blend of rice used to make onigiri (rice balls) and bentō (box lunches) since the quality remained high, despite the relatively low price. But as the price of Fukushima rice has been rising in the years since 2014, the restaurant sector, which is even more price-conscious than the prepared-food sector, has begun turning to even cheaper options from other rice-growing areas. 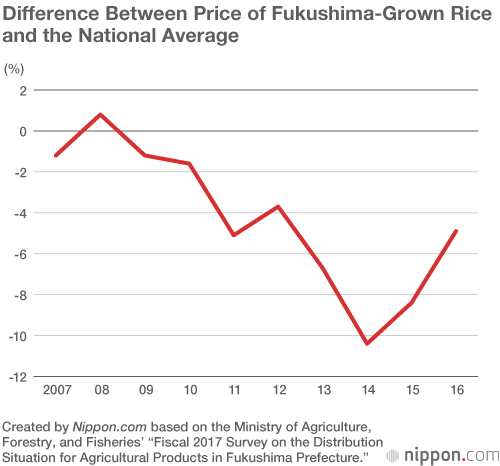 In order to regain consumer trust, Fukushima Prefecture implemented comprehensive radiation testing of all rice, starting from the 2012 crop. The tests for that year revealed that only 71 bags of rice out of 10.34 million in total had a radiation level that exceeded the limit under the Food Sanitation Act, which is of 100 becquerels of cesium per kilogram. In other words, 99.99% of the rice grown in Fukushima Prefecture that year was under the limit. In addition, 10.32 million bags that year were below the minimum detectable level of 25 becquerels. For three consecutive years since 2015, no rice has exceeded the legal radiation limit. And in 2017, nearly 100% of the rice was under the minimum detectable level. 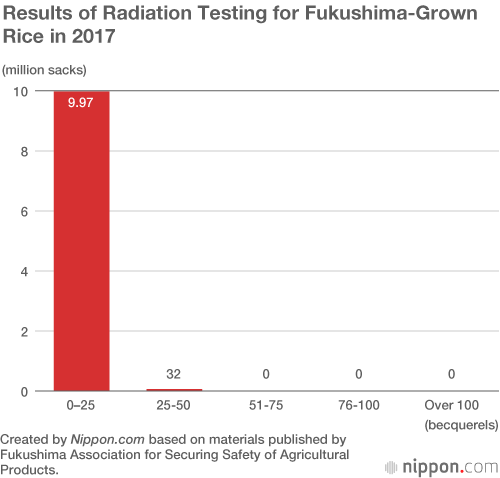