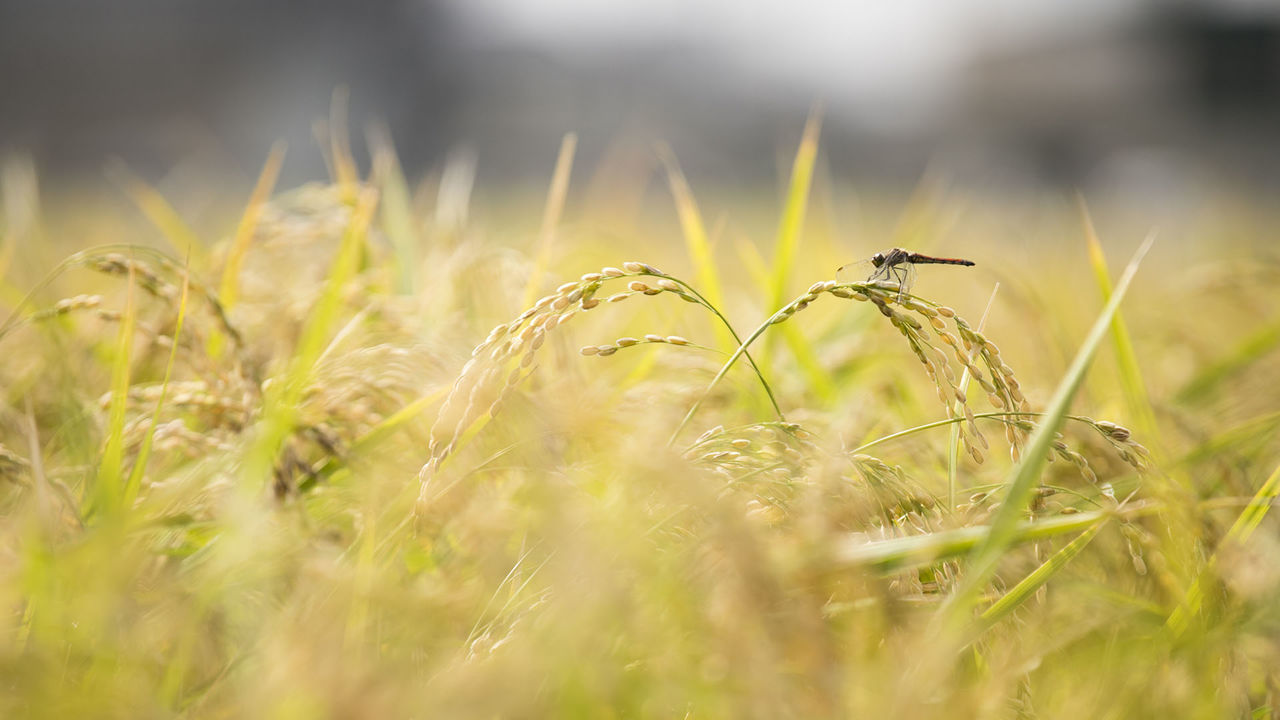 The origins of Izumibashi Shuzō’s red-dragonfly trademark become clear when you visit the brewery’s rice paddy in Ebina, Kanagawa Prefecture in mid-October, just before the harvest. Darting and hovering above the golden-ripe ears of rice are the beloved akatonbo (akiakane or autumn darters) traditionally associated with autumn in rural Japan.

Such idyllic scenes were once commonplace throughout Japan. But the paddies that formerly covered much of the archipelago (providing a breeding ground for the akatonbo) are fast disappearing. One reason is a decline in domestic rice consumption over the past 50 years. Another is the abandonment of family farms owing to a lack of willing successors.

Not everyone is resigned to the loss of Japan’s traditional rural scenery and ecology, however. Some are working to halt or even reverse the trend. Among them is Hashiba Yūichi, sixth-generation owner of Izumibashi Shuzō brewery. 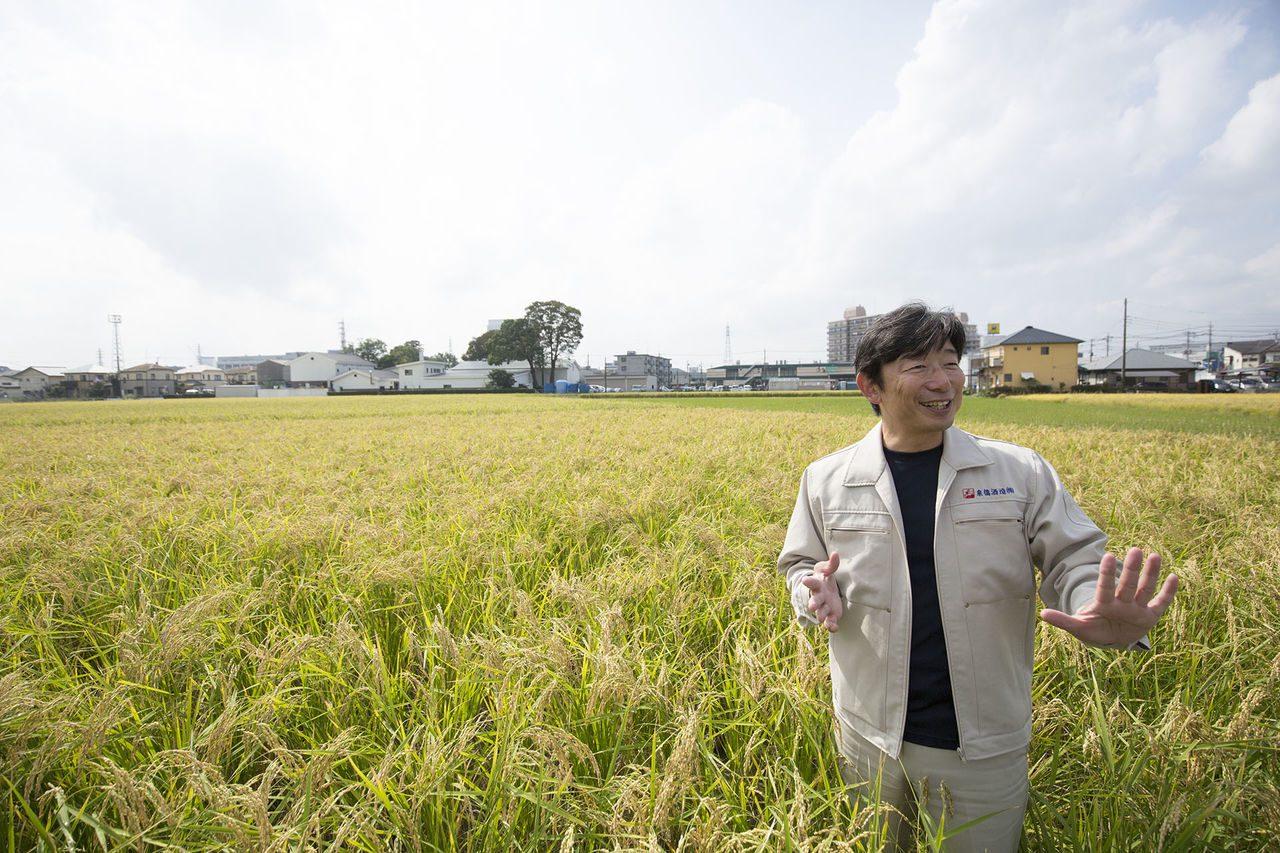 Hashiba Yūichi, sixth-generation owner of Izumibashi Shuzō brewery. Hashiba, who graduated from Keiō University and worked at a securities firm before taking over the family business at age 27, spends much of his time with his employees in the fields and the brewery.

Ebina, in central Kanagawa Prefecture, is a heavily developed commuter town less than 50 kilometers from the heart of Tokyo. Yet here, just a 15-minute walk from Ebina Station, one finds oneself in a vast expanse of paddy land. In the center of it all is Izumibashi Shuzō, which supports sustainable rice cultivation on 46.5 hectares of farmland (including its own 7.5-hectare plot—about 15% of the paddy land within Ebina’s city limits.)

The area around Ebina, part of the fertile Sagami River floodplain, has a long history as one of Eastern Japan’s premier centers of rice production. “Izumibashi Shuzō was established in 1857, but my ancestors were rice farmers long before that,” notes Hashiba.

Like many an old brewery, Izumibashi Shuzō probably started out making sake from surplus table rice. But that practice stopped with the Food Control Law of 1942. Enacted during wartime to impose centralized control over the supply, pricing, and distribution of rice and other staple commodities, the Food Control Law prohibited rice farmers from selling sake or sake brewers from growing rice commercially. Moreover, it regulated distribution in a way that limited makers’ procurement options. Until Hashiba took over the business 23 years ago, Izumibashi Shuzō had little choice but to source its rice from growers in Hyōgo and Niigata prefectures via the local sake brewery cooperative.

Regulations were finally relaxed in 1995, when the old Food Control Law was replaced by an updated supply- and price-stabilization framework. That was the same year that Hashiba took over the family business after several years in an office job at a Tokyo securities firm. Taking advantage of the regulatory reforms, he set out to become one of postwar Japan’s first vertically integrated farm-to-bottle brewers.(*1) 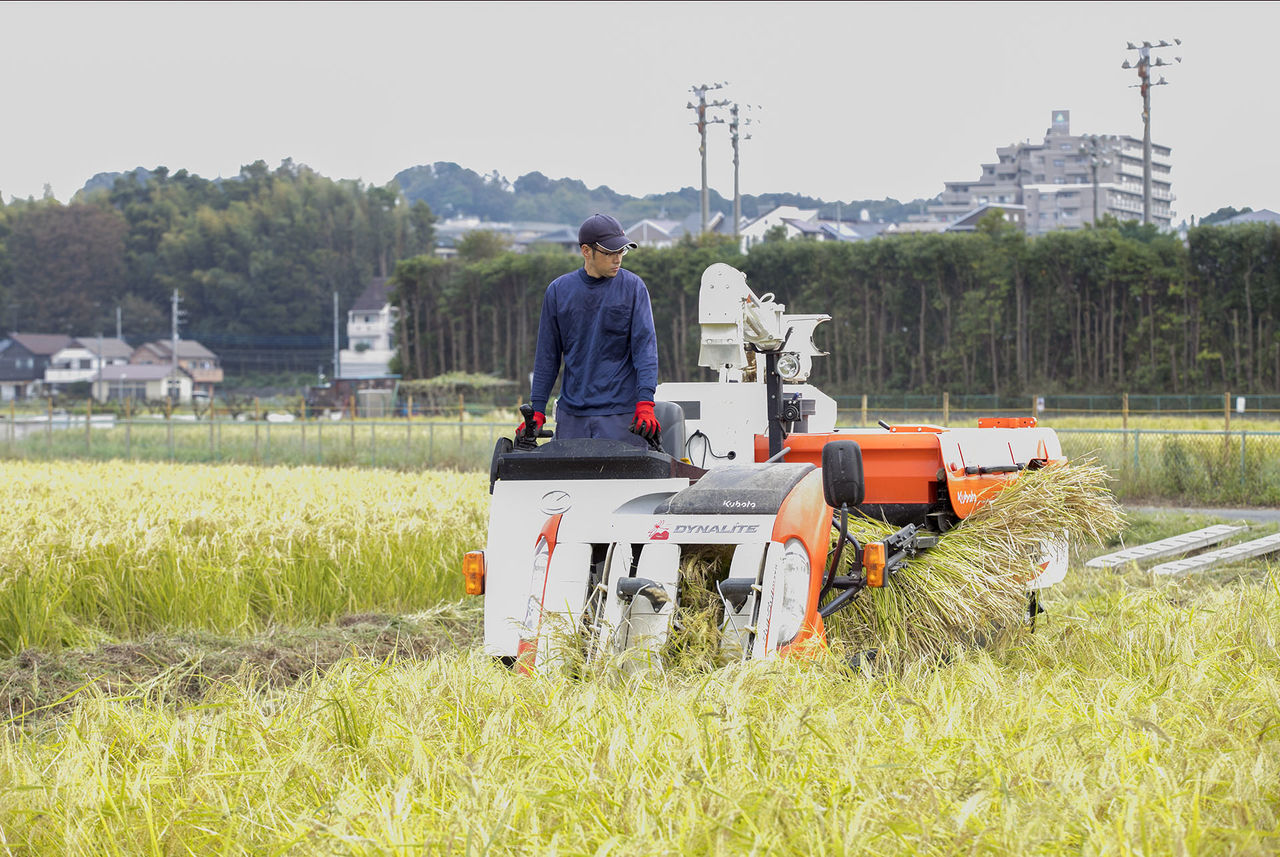 Harvesting premium Kame no O sake rice in the paddy adjacent to the brewery.

Unlearning the Rules of Rice Cultivation

Hashiba started out small, planting sake rice on the 0.5-hectare plot owned by and adjacent to the family brewery. The following year, 1997, he persuaded four neighboring farms to enter into a loose collective dubbed the Sagami Sake-Rice Study Group. The farmers initially agreed to plant two varieties: Yamadanishiki, the acknowledged “king of sake rice,” and Omachi, a popular older variety. Unfortunately, the first year’s crop was a disaster, as most of the stalks fell over before the rice could be harvested.

It was the brewing scientist Nagatani Masaharu who showed Hashiba the way forward. A technical officer with the National Tax Agency (which oversees Japan’s liquor industry), Nagatani went from region to region coaching growers and brewers in the science of sake rice and sake making. He explained to Hashiba that the growing requirements of sake rice differ from those of flavorful table rice—for example, the former needs to be lightly fertilized to prevent the stalks from growing too high and falling over.

Hashiba was convinced, but persuading his neighbors to abandon long-established practices was a different matter. 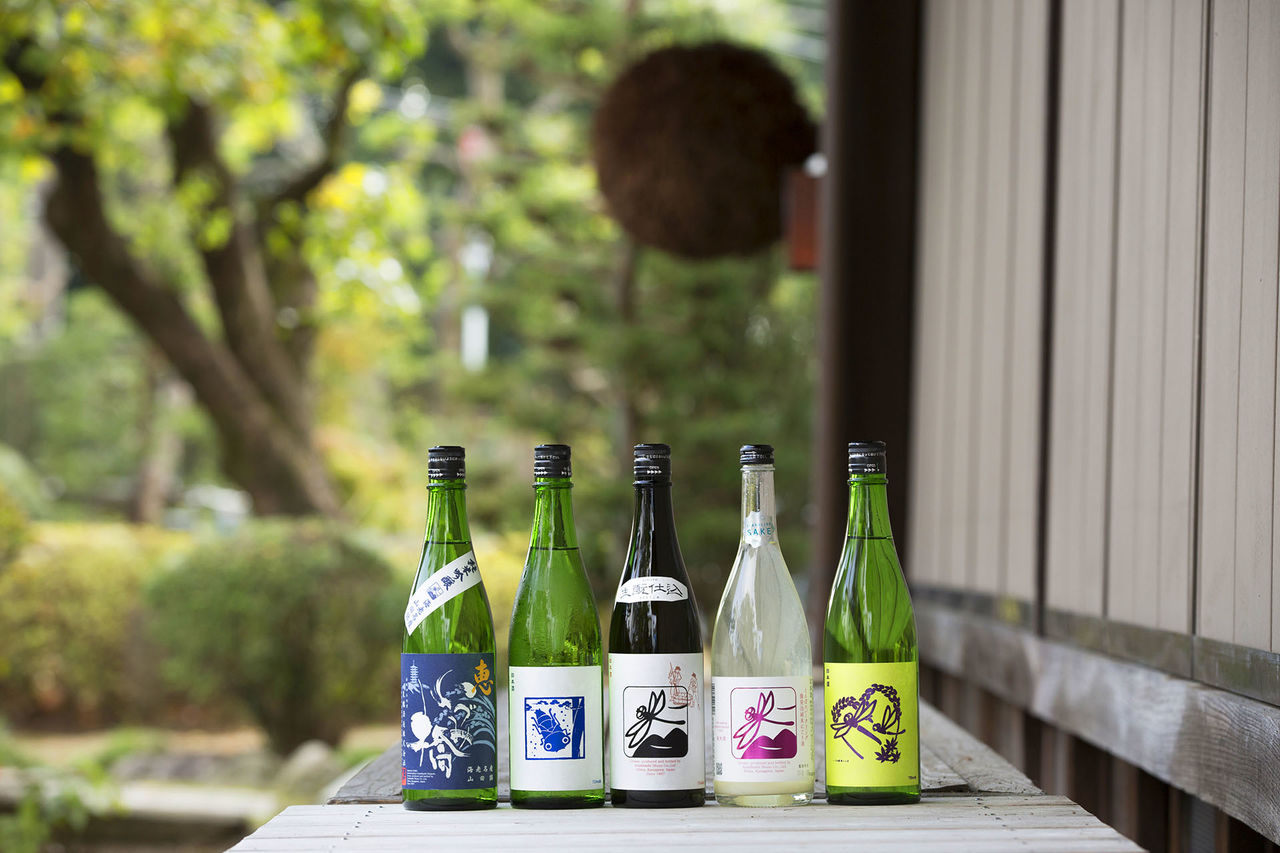 “There was some resistance at first,” says Hashiba. “But bit by bit, I got them to see what a good thing it would be for the community for us collaborate by using locally grown rice to brew fine sake.” In time, the growers became more receptive other suggestions, such as the use of water management to minimize the use of herbicide.

“The farmers have their own concerns, which I can’t ignore,” says Hashiba. “So, we’ve worked together to develop a pricing system that adds a premium for top-grade rice. They like to joke that I have a knack for roping people into my schemes, but we trust one another now. It’s a good relationship.”

The quality of the sake rice steadily improved, and eventually the farmers were able to dispense with agrochemicals altogether. The growing numbers of akatonbo hovering over the fields each fall attest to the environmental benefits of the methods Hashiba has championed.

Since then, the Sagami Sake-Rice Study Group has grown from four households to seven. In addition, the collective has expanded the area under cultivation by securing permission to grow rice on abandoned farmland in an adjacent municipality. In this way they are helping to preserve the area’s traditional scenery and ecology. 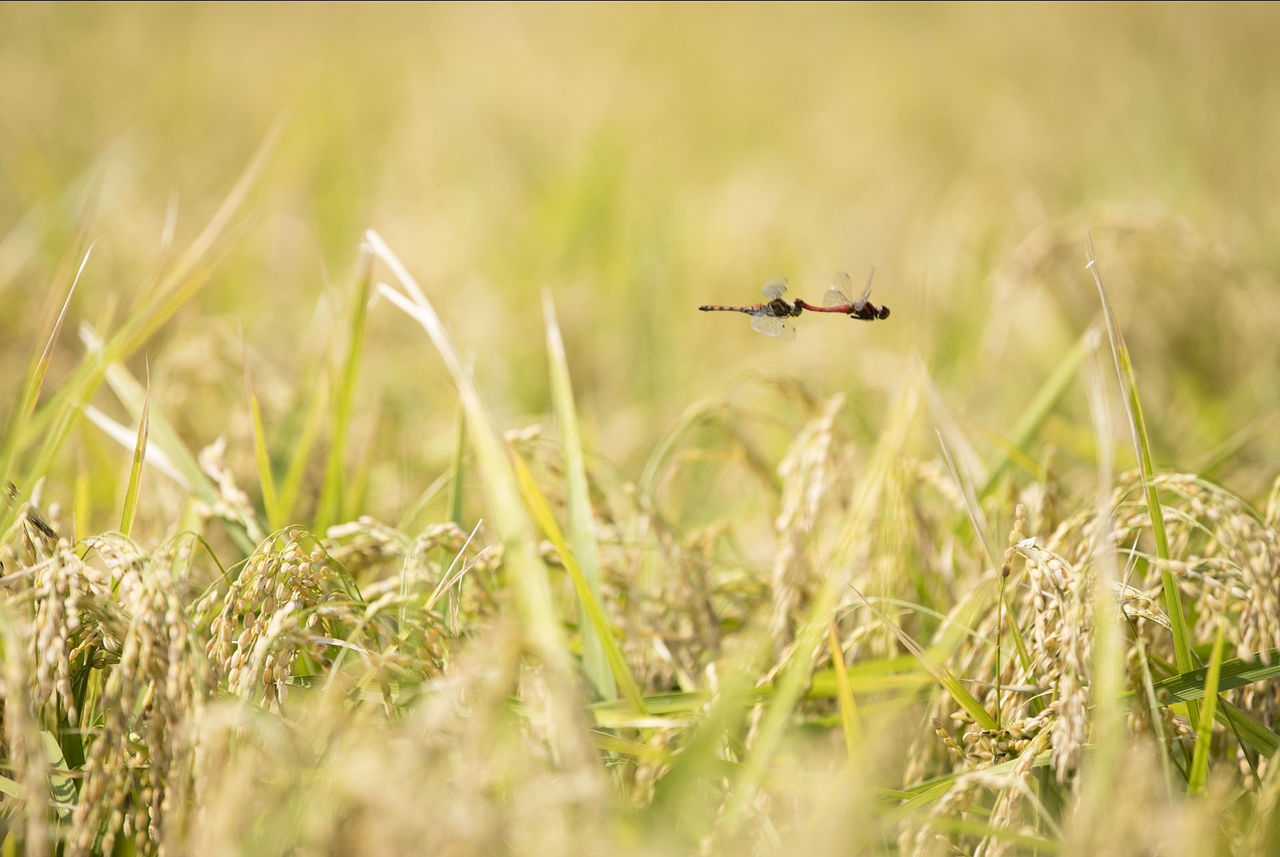 Needless to say, Hashiba did not neglect the brewing process either. In 2006, satisfied with the quality of his sake rice, he made the switch to junmai-shu, sake made just from rice and water (assisted by kōji mold and yeast), without the addition of distilled alcohol. He also tried his hand at the old kimoto method of preparing the yeast starter (moto). This time-consuming back-to-basics process relies on naturally occurring lactobacilli to prevent the growth of undesirable microorganisms instead of adding commercially available lactic acid. Today the brewery uses the kimoto method for half of its product lineup. Izumibashi’s naturally brewed sake is the fruit of an integrated and collaborative process that begins with the cultivation of high-quality sake rice.

Left: Moto-suri involves manually mixing kōji (steamed rice on which a special mold has been cultured) with rice and water to make the yeast starter (moto or shubo). Nowadays most breweries dispense with this labor-intensive process. Right: An Izumibashi brewery worker stirs the kōji rice to adjust the dampness and temperature, a step referred to as nakashigoto. Hashiba has hired a staff of full-time employees (average age 35) for his vertically integrated operation instead of engaging seasonal workers to brew sake each winter, as is customary.

At the same time, Hashiba relies on data-driven precision-brewing methods to ensure consistent results and continuous improvement. For example, the brewery’s high-tech milling machine not only polishes the rice to exactly the right seimai buai for each type of sake but also provides an analysis of the rice (moisture content and so forth) in each batch. By correlating this data with observations regarding water absorption, kōji quality, and other brewing parameters, Hashiba can evaluate the quality of the rice for sake-brewing purposes and use that assessment to fine-tune the rice-growing process. 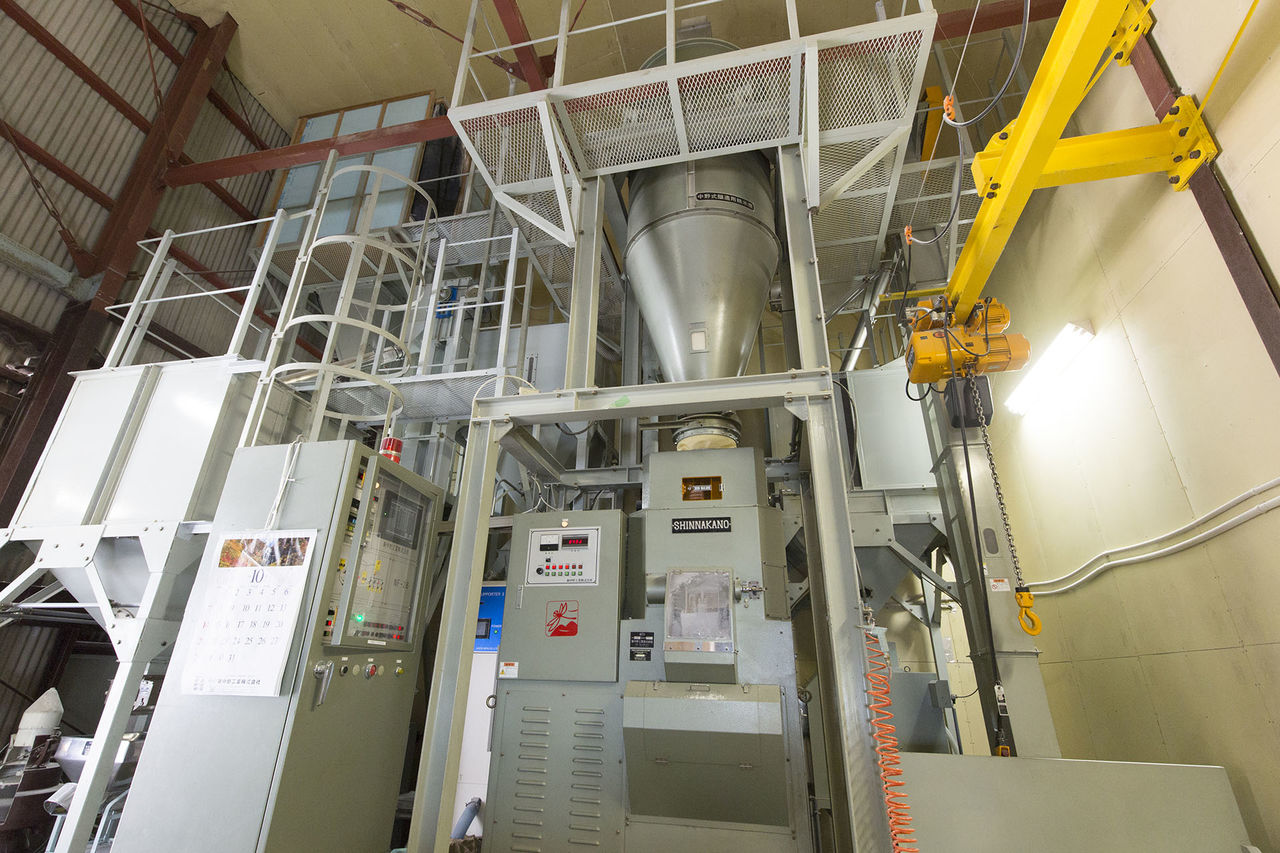 “This is something that’s only possible when you oversee the entire process in an integrated fashion, from rice cultivation and milling to kōji making and fermentation,” says Hashiba, his face animated against a backdrop of golden rice fields. “Through this process, we’re helping to preserve the land and environment passed down to us by our forebears, while producing a quintessentially local sake. That, as I see it, is our mission.” 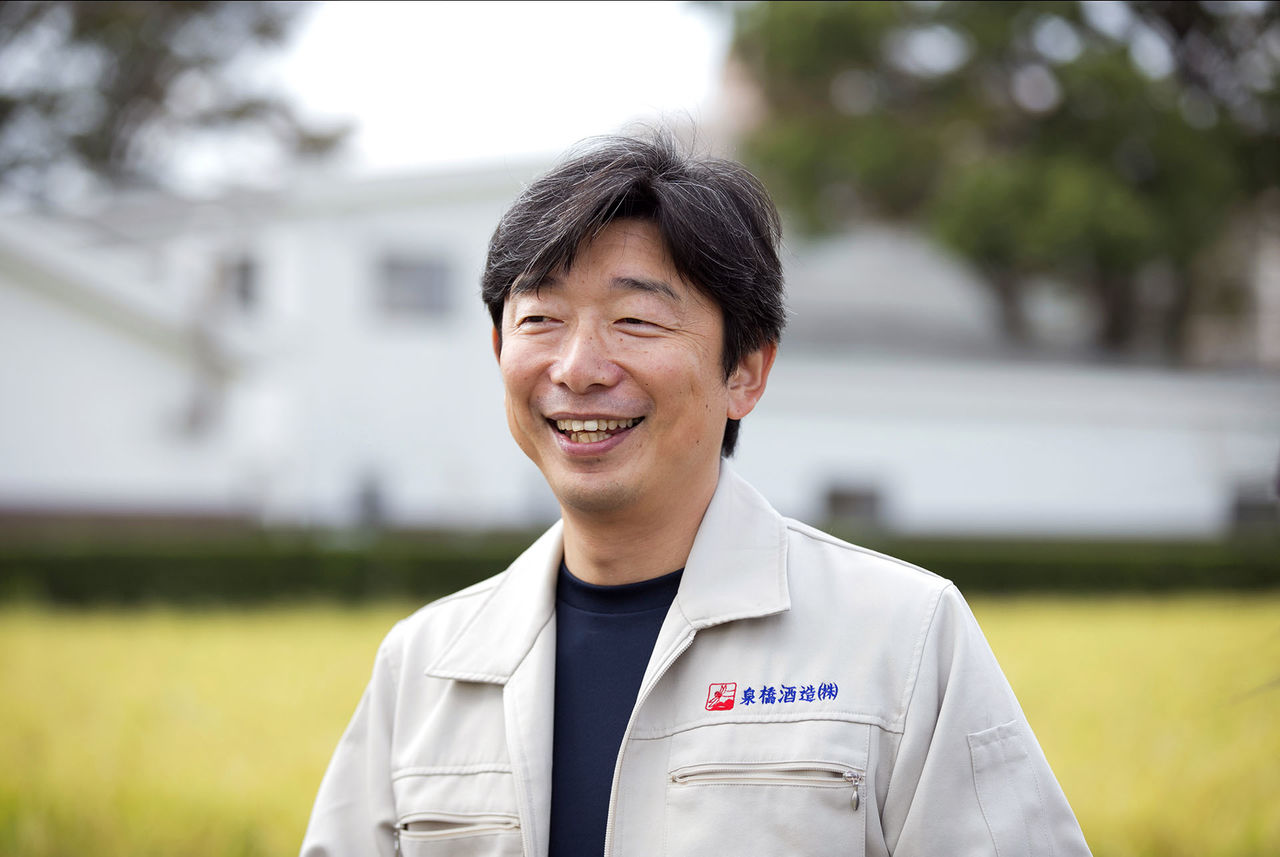 This article concludes Nihonshu Now, a series of 19 articles aimed at enhancing readers’ understanding and appreciation of nihonshu in all its variety while profiling some of the key people and places at the heart of Japan’s sake renaissance.

The past two decades have witnessed dramatic changes in Japan’s sake industry. Top-quality sake has gained an enthusiastic following overseas, and young Japanese consumers, ever alert to the latest global trends, have jumped on the bandwagon as well. In my reportage, I have focused especially on the dedicated, intrepid young brewer-owners who helped turn nihonshu into a global phenomenon by rolling up their sleeves, painstakingly integrating advanced technology and traditional brewing techniques, and boldly pursuing their own vision. The many outstanding artisanal labels that have emerged from those efforts have restored pride and vitality to local communities while helping to preserve the rural scenery and ecology by supporting cultivation of premium sake rice. Sake enthusiasts in the retail sector, including the knowledgeable owners and staff of izakaya, sake bars, and specialty stores, have contributed greatly to this renaissance as well by spreading the word about fine small-batch craft sakes.

Nihonshu has truly entered a new era. Today’s artisanal brewers are continually refining their ingredients and techniques, yielding a remarkable range of appealing sakes that have captivated chefs, sommeliers, and foodies worldwide. If you tasted sake years ago and decided it was not for you, I would urge you to give it another try, starting with some of the outstanding brands introduced in these pages.

Nihonshu, the proud product of centuries of Japanese brewing ingenuity, continues to evolve.

(Banner photo: An akatonbo, symbol of Izumibashi Shuzō brewery, atop an ear of rice. Environmentally friendly rice farming ensures a habitat for the beloved red dragonflies, which spend their nymph phase in the water of the rice paddy. Photos by Kawamoto Seiya.)