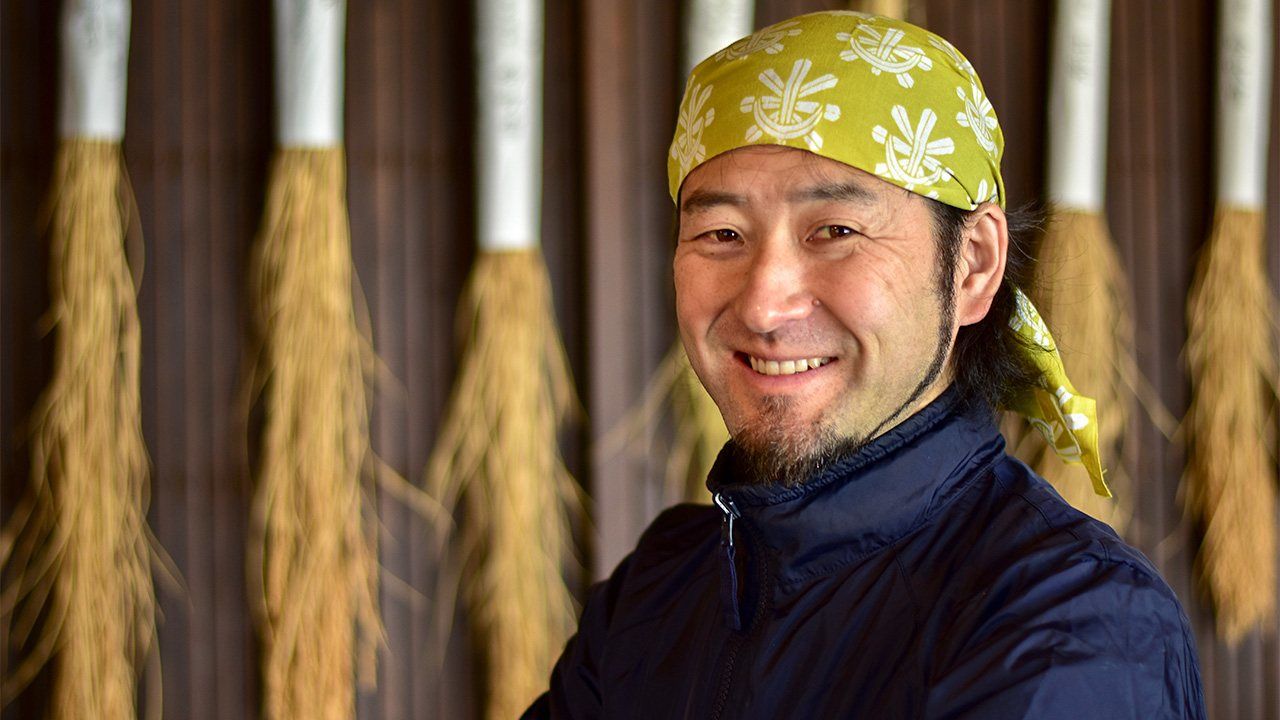 Culture Nov 8, 2018
In the historic town of Nagahama on the northern shore of Lake Biwa, a centuries-old brewery is honoring the region’s rich samurai heritage—and bucking the trend toward fragrant, “aristocratic” nihonshu—with umami-forward Shichihon-yari.

The Japanese archipelago is sprinkled with historic sake breweries, but few can match the pedigree of Tomita Shuzō in Nagahama, Shiga Prefecture. The maker of Shichihon-yari traces its beginnings all the way back to 1534, a year that witnessed the birth of Oda Nobunaga, the swashbuckling warlord who helped lay the foundation for Japan’s unification.

The brewery’s fifteenth-generation owner, Tomita Yasunobu, has remained true to that cultural heritage, as well as the local terroir, highlighting deep, complex flavors at a time when the market was clamoring for aromatic ginjō-shu.

Japan’s sake industry has changed dramatically over the past three decades. In the late 1980s, as a new generation of drinkers became enamored of the fragrant drinkability of ginjō-shu—a special premium grade of sake made with highly polished rice—sake brewers began to shift their focus from taste to aroma, aided by new strains of yeast and other advances in brewing technology. For at least a decade, beginning in the 1990s, the most fragrant sakes consistently took the top honors at competitions and tasting events.

However, not everyone supported this trend, and about 10 years ago the dissenters began to make their voices heard.

“What makes nihonshu special is the rich, complex flavor woven from rice, water, and kōji,” argues Tomita. “I want people to enjoy nihonshu’s unique umami. I have no desire to make sake that smells like fruit or flowers.”

Recognized as one of the five basic tastes (along with sweetness, sourness, bitterness, and saltiness), umami is a savory richness commonly associated with proteins like meat and aged cheese. It was first identified in 1908 by Ikeda Kikunae, who isolated glutamate, an amino acid, as the key flavor component in konbu kelp, used to make dashi broth. In the early years of the twenty-first century, neuro-scientists in the West confirmed the discovery by identifying special umami taste receptors that respond to glutamate and other compounds. Aided by the growing popularity of Japanese cuisine, the term has gained currency among foodies and culinary professionals worldwide. Nihonshu is relatively rich in umami, thanks to compounds produced by kōji and yeast in the complex sake-brewing process.

More specifically, Tomita cites the brewery’s deep local roots in explaining his focus. Shiga Prefecture, like other parts of the Kansai region, has a long love affair with umami. While some may find this surprising, given the area’s reputation for subtly seasoned food, one of the fundamental ingredients in Kansai cuisine is rich dashi broth deeply infused with the umami of katsuobushi (dried, fermented, and smoked skipjack tuna) and konbu kelp. The culinary culture of Shiga in particular showcases carp and other freshwater fish from Lake Biwa simmered in a rich, salty-sweet broth, as well as such local specialties as funazushi, a pungent fermented fish said to be the ancestor of sushi. To pair well with such umami-filled foods, a sake needs to be complex and full-bodied without lingering cloyingly on the tongue. This, in a nutshell, is Shichihon-yari.

Not surprisingly, the label’s biggest fans are concentrated in the Kansai region. Native tastes in food and drink are doubtless a major factor fueling its local popularity, along with Kansai natives’ natural pride in their region’s cultural achievements. 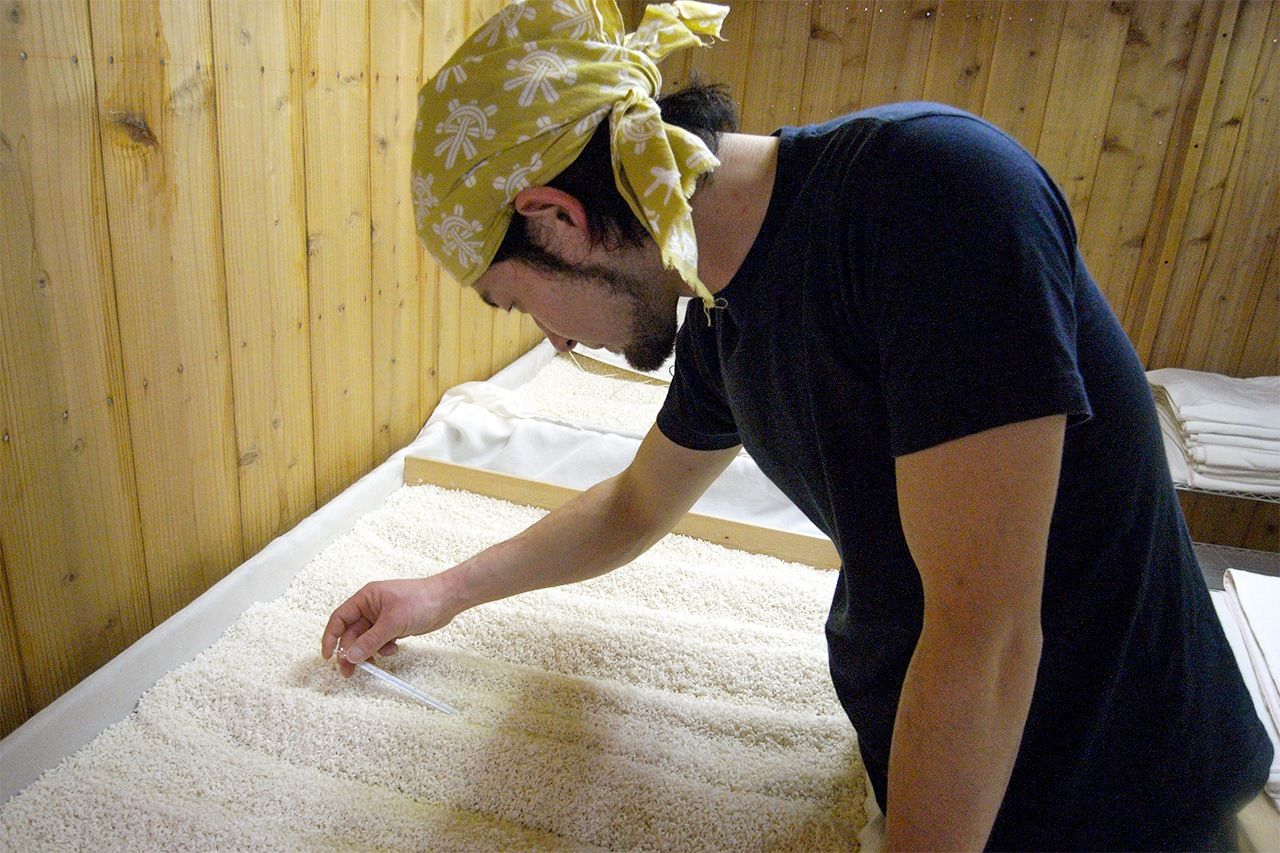 Brewer-owner Tomita Yasunobu checks the temperature of steamed rice on which kōji mold is cultured. Kōji, which is needed to break the rice’s starch down into fermentable sugars, also produces amino acids responsible for the distinctive umami of nihonshu. 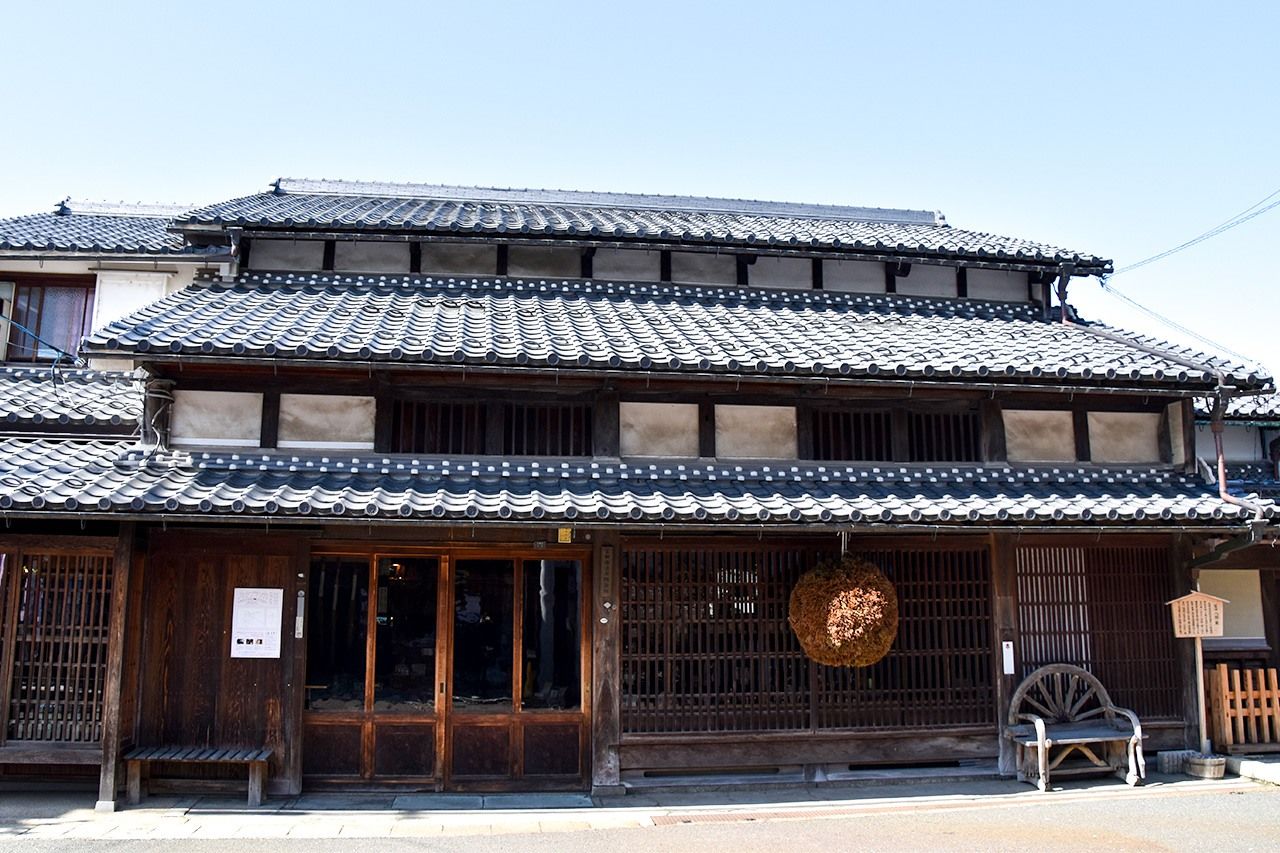 The vintage storefront of Tomita Shuzō in Nagahama, Shiga Prefecture, testifies to the brewery’s rich history.

Tomita Shuzō is located on the north shore of Lake Biwa. The immediate region, traditionally referred to as Kita Ōmi, is known for its cold and snowy winters, as well as its special place in the turbulent history of pre-Tokugawa Japan. Nearby Mount Shizu gave its name to the 1583 Battle of Shizugatake, which tipped the scales in favor of Toyotomi Hideyoshi (1537–98), the second great unifier of the Sengoku period (1467-1568). The name Shichihon-yari—literally, “seven spears”—is a reference to the seven commanders who led Hideyoshi's victorious forces.

While Tomita Shuzō traces its roots all the way back to 1534, the brewery that stands in the Kinomoto district of Nagahama today was built in 1744, in the middle of the Edo period. Over the centuries, the Tomita family entertained some highly distinguished visitors, including the famous calligrapher, potter, and epicure Kitaōji Rosanjin (1883–1959), who gifted his hosts with a hand-carved wooden plaque bearing the characters for Shichihon-yari. The carving is proudly displayed inside the brewery’s store, and Rosanjin’s calligraphy is incorporated in the design of its labels.

The wooden plaque carved by calligrapher and epicure Kitaōji Rosanjin, which inspired the Shichihon-yari label. 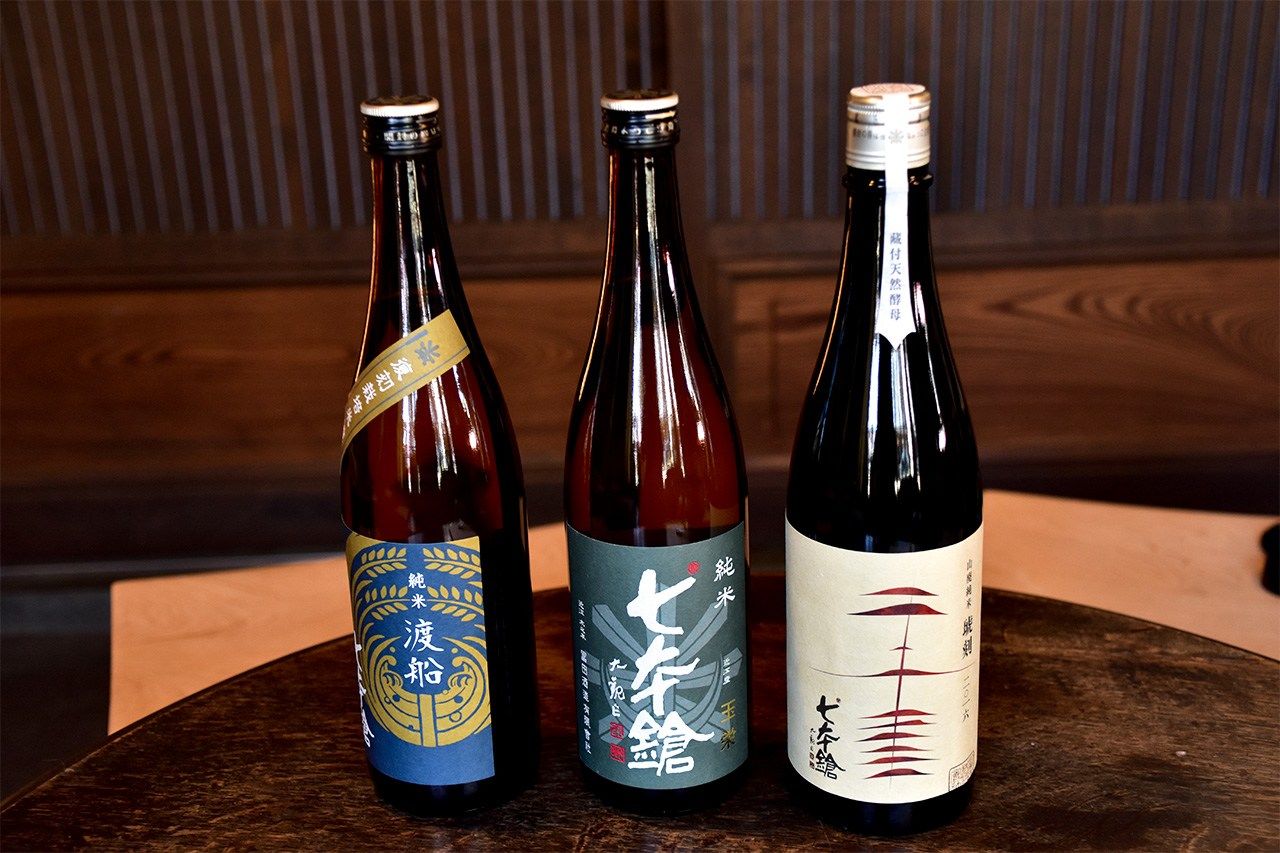 Tomita Shuzō’s flagship junmai-shu Shichihon-yari (center), made with local Tamasakae rice, is flanked by the brewery’s yamahai junmai-shu Kokoku (left), brewed with wild yeast only, and its prize-winning junmai-shu Shiga Wataribune, made from a rare local heirloom variety of sake rice.

Fifteenth-generation owner Tomita Yasunobu was born in 1974. After graduating from college in the 1990s, he took a corporate job in Tokyo with the aim of learning some business skills and forging connections before taking charge of the family business. But Tomita was facing an uncertain future. From the mid-1970s on, the family brewery had relied heavily on revenue from the sale of “generic” sake to a leading Kyoto brewer. As sake sales declined nationwide, the big makers kept negotiating prices downward, until by the 1990s, the survival of the business was in doubt.

In Tokyo, Tomita learned something about the shrinking, evolving sake market. Amid the continued decline in overall sake sales, he took note of the growing popularity of delicate, fragrant sakes from northeastern Japan, particularly the pricey daiginjō made from highly polished Yamadanishiki rice. While acknowledging the merits of Yamadanishiki and the high level of technique that goes into brewing daiginjō, Tomita wondered whether it made sense for brewers all over Japan to jump on the same bandwagon.

Tomita had been working in Tokyo about five years when he realized it was time to return to Shiga and start taking charge of the business—though he still had no clear idea of the direction in which he wanted to take it. Before heading home, he decided to take a month and a half off to travel to Europe and tour Scottish distilleries and French wineries in search of inspiration.

He finally found what he was seeking at an intimate little husband-and-wife winery in Burgundy. “It was a very small operation, but what struck me above all was the confidence and pride that glowed in both of their faces as they talked about making wine that brought out the unique qualities of their own locally grown grapes. That was when I began to understand the importance of my own region’s history and culture.”

Returning to Nagahama to assume control of the business in 2002, Tomita rolled up his sleeves and personally supervised the overhaul of brewing operations. Shifting the focus of production to junmai-shu, he refurbished the kōji-culturing room and refined the kōji-making process. He also dispensed with the step of roka filtration (carbon filtration to remove very fine particles) with the aim of nurturing and preserving as much natural umami as possible.

Over time, Tomita also intensified quality-control measures to eliminate the random variation and errant flavors that can creep in at various stages in the brewing process. He tightened control of kōji and mash temperatures and used refrigeration to keep the filtration equipment at 5°C. In addition, he gradually increased his reliance on local Shiga rice, which now comprises a full 99% of the rice used by the brewery.

Tomita is particularly partial to Tamasakae, a variety of sake rice long cultivated in Shiga.

“Tamasakae isn’t suited to ginjō brewing because it tends to produce acid, so a lot of breweries nowadays avoid it. But I’m not trying to make a delicate, flowery sake tailored to the tastes of the aristocracy. Of course, that doesn’t mean we’re making low-grade liquor for the masses, either. What I’m aiming for is something worthy of the name Shichihon-yari—the kind of sake that would have been appreciated by the old warrior elite, people steeped in a culture typified by the tea ceremony and nō theater.

“In terms of taste, I’m looking for lots of umami plus a bit of acid for backbone, though nothing coarse or harsh. It has to go down easy and leave a nice clean finish. Using Tamasakae, which is quite compatible with our water, I feel we’ve come closer to that ideal year by year.” 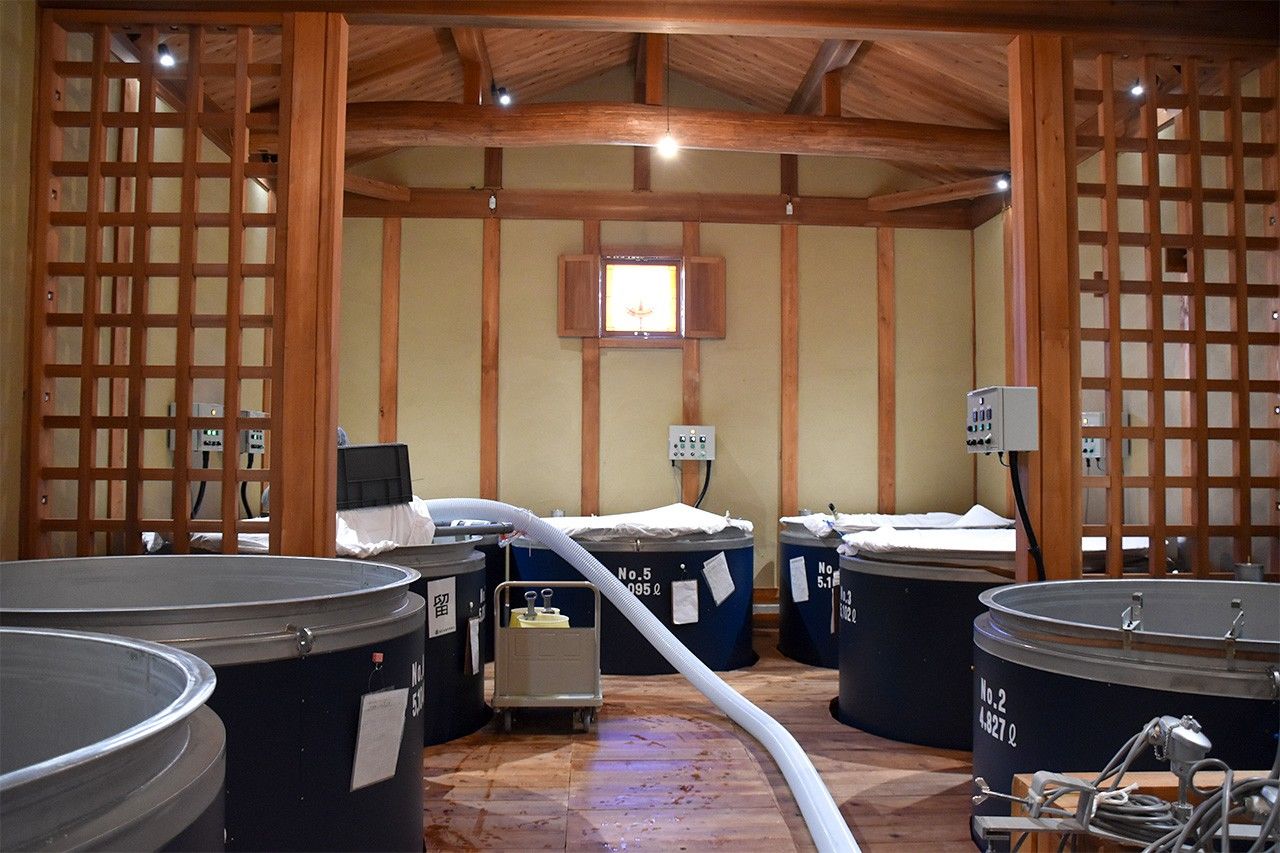 The interior of Tomita Shuzō’s new state-of-the-art mashing room, added in 2015. (The old facility dates to the late Edo period.) 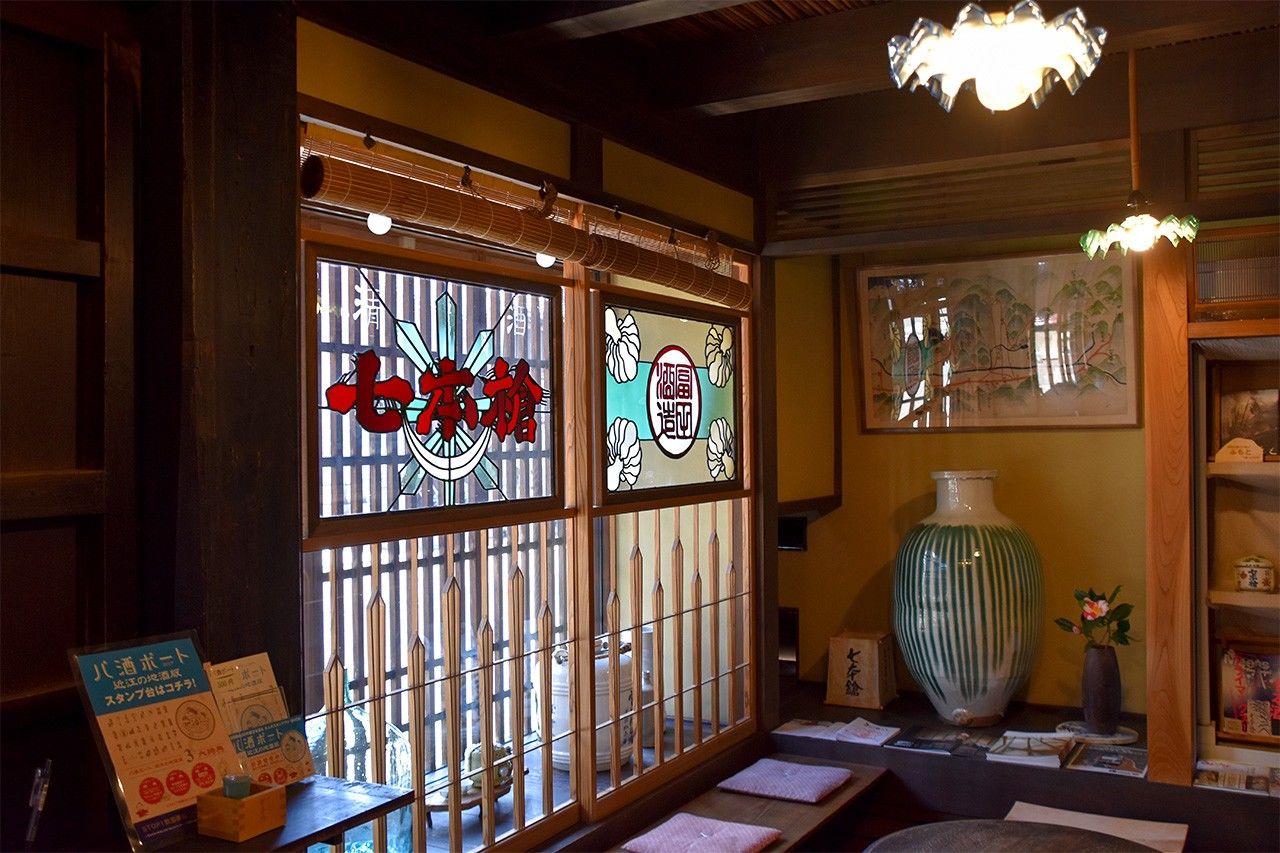 A view from the brewery shop just inside the main building, constructed in 1744. (The stained-glass windows are a modern touch.)

From Shiga to the World

In addition to his work at the brewery, Tomita is actively involved in programs organized by local artisans and farmers to highlight the special appeal of Kita Ōmi and its traditional culture. Tomita believes it is a culture worth transmitting to the rest of Japan and, indeed, the world. Of the total volume of sake Tomita Shuzō produces each year—equivalent to some 100,000 1.8-liter bottles—9% is exported to the United States and other overseas markets (13 countries altogether).

“More and more food professionals have been touring the brewery,” says Tomita. “An American who visited recently told me that Shichihon-yari paired well with blue cheese. It makes sense in a way, since funazushi has a cheesy smell to it. It’s a new discovery!” His face, though still full of youthful energy, conveys the hard-earned confidence and pride appropriate to a fifteenth-generation brewer. 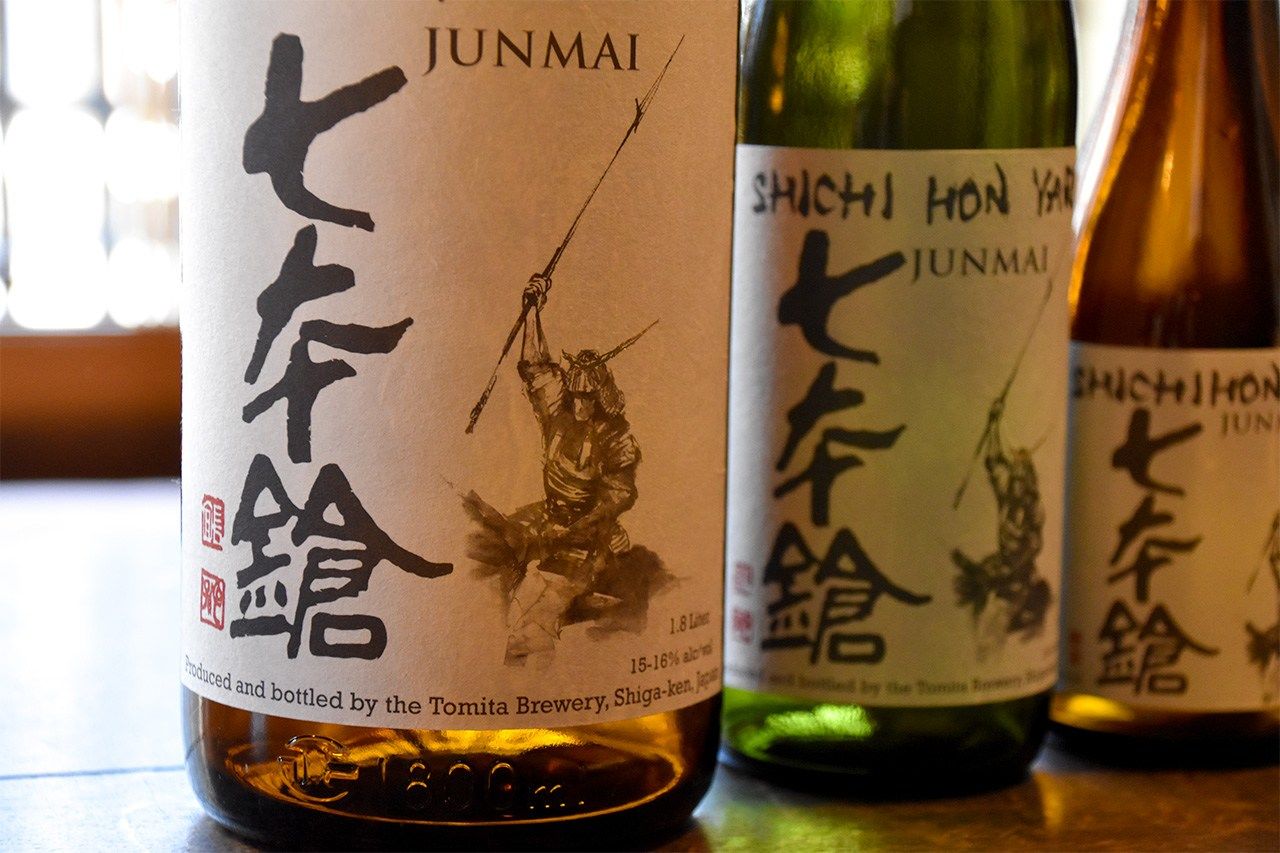