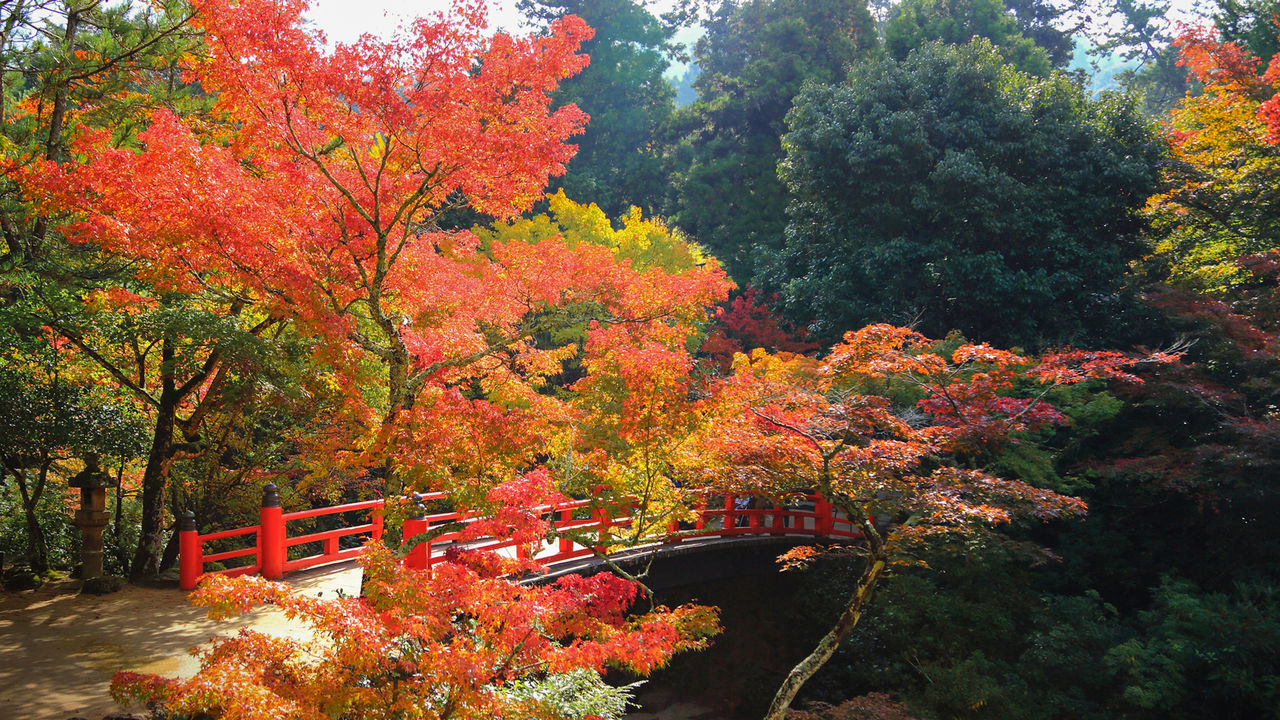 Nov 15, 2018
Hiroshima’s island of Miyajima is known for its autumn colors and momiji manjū (bean-jam buns shaped like maple leaves). The island’s hill Misen, whose base is home to a World Heritage site, has abundant natural glory and boasts many sightseeing locales, including a commanding observation deck and the temple Misen Hondō.

Located in Hiroshima Prefecture, the island of Miyajima is one of the top tourist sites in Japan. The island is particularly known for Itsukushima Shrine, with its famed torii gate that, half-submerged at high tide, makes the main building of the shrine appear to float on the water. The official name of the island is Itsukushima, though it is also commonly known as Miyajima or Aki-no-miyajima. The present-day place name is Miyajima-chō, a district in the city of Hatsukaichi. 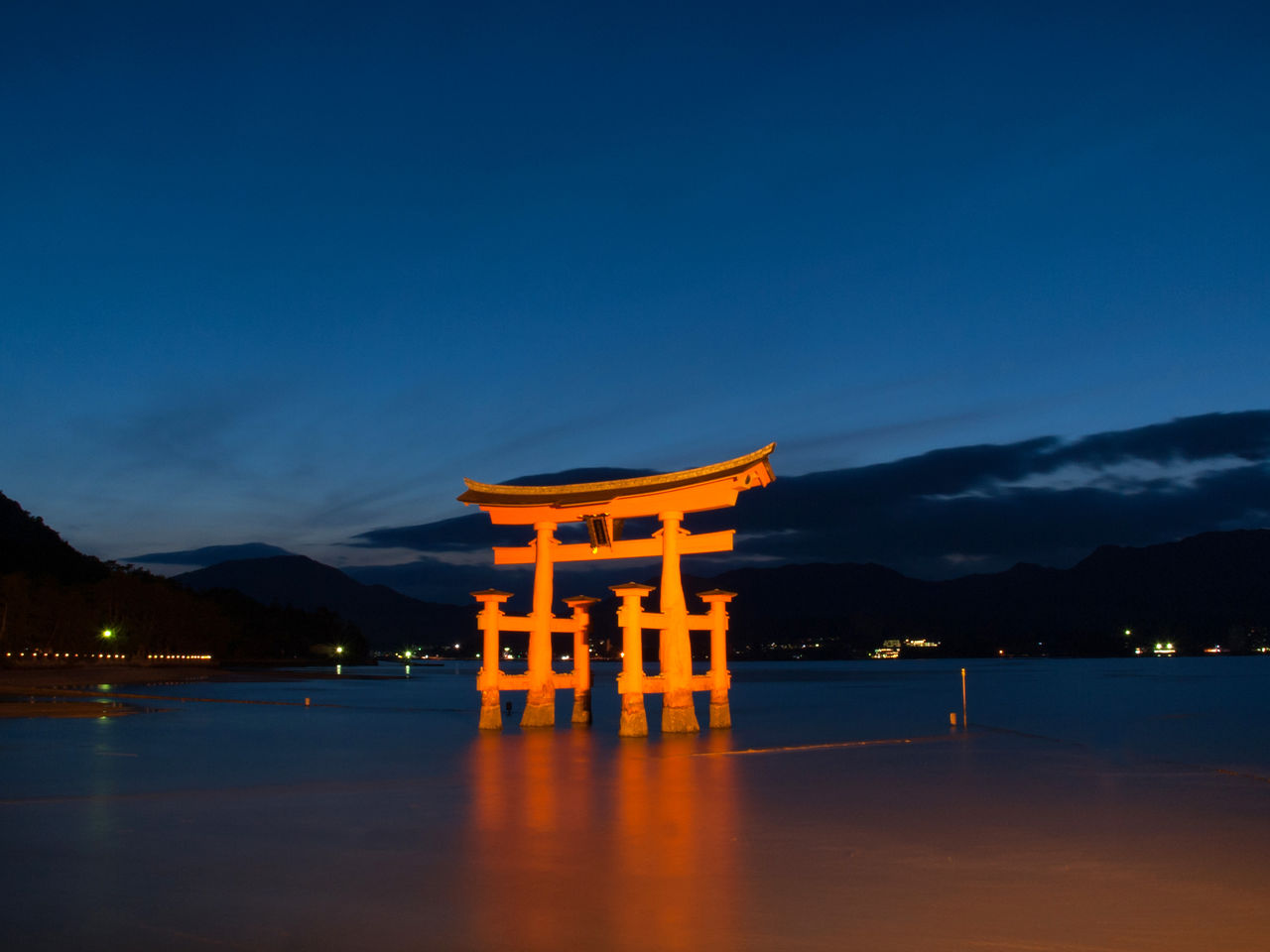 The Ōtorii (Great Gate) of Itsukushima Shrine seems to float on the water at high tide.

In 1996, Itsukushima Shrine was designated a UNESCO World Heritage Site, together with the sea before it and the primeval forest to the rear of it. Since then, rising numbers of foreign tourists visiting Hiroshima Prefecture are coming to see this site as a package deal with the area’s other World Heritage Sites, the Hiroshima Peace Memorial (Genbaku Dome) and Hiroshima Peace Memorial Park. As a result, the area has become a world-class tourist site, with the number of visitors to the island increasing from 2.8 million in 2001 to a new record of 4.5 million in 2017. 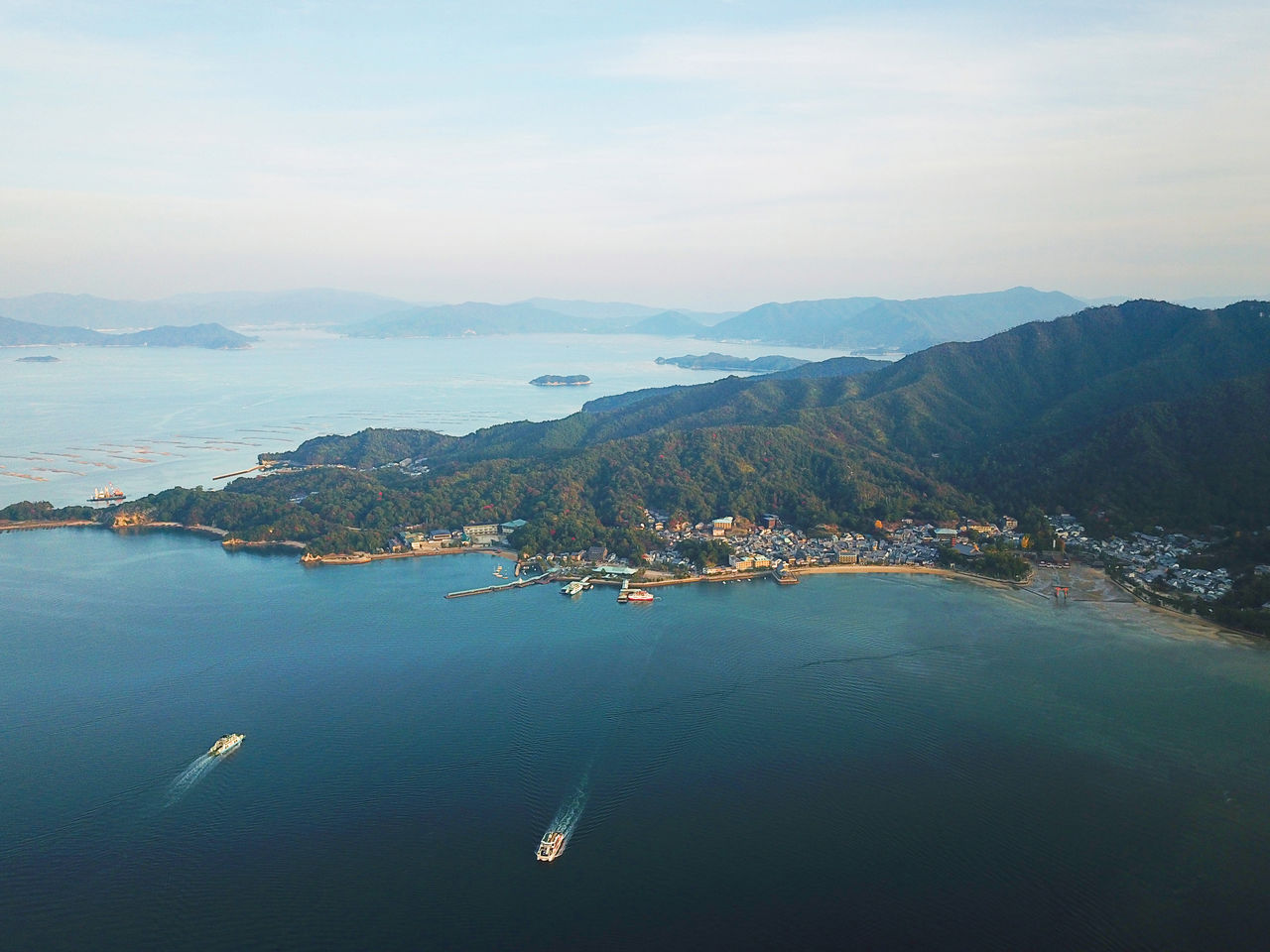 An aerial view of the ferries passing back and forth between Miyajima and Hiroshima. Itsukushima Shrine and its Great Gate can be seen at right.

Momiji-manjū, in which bean jam is infused into Castella cakes shaped like autumn leaves, has long been a staple souvenir of Hiroshima. It began life as a signature creation of Miyajima, however, and even many Japanese who have never been here likely associate autumn leaves with the island

One particular place to experience autumn leaves on Miyajima is Momijidani Park. Near the entrance stands Iwasō, an old ryokan dating back to the 1800s. Over its long years this inn has hosted visitors including various members of the Japanese imperial family, Prime Minister Itō Hirobumi, and novelist Natsume Sōseki. The story goes that during the Meiji period (1868–1912), the manager of Iwasō hired a maker of Japanese sweets to devise a tea snack that could only be found at his inn, and the confectioner created momiji-manjū in answer to this request. 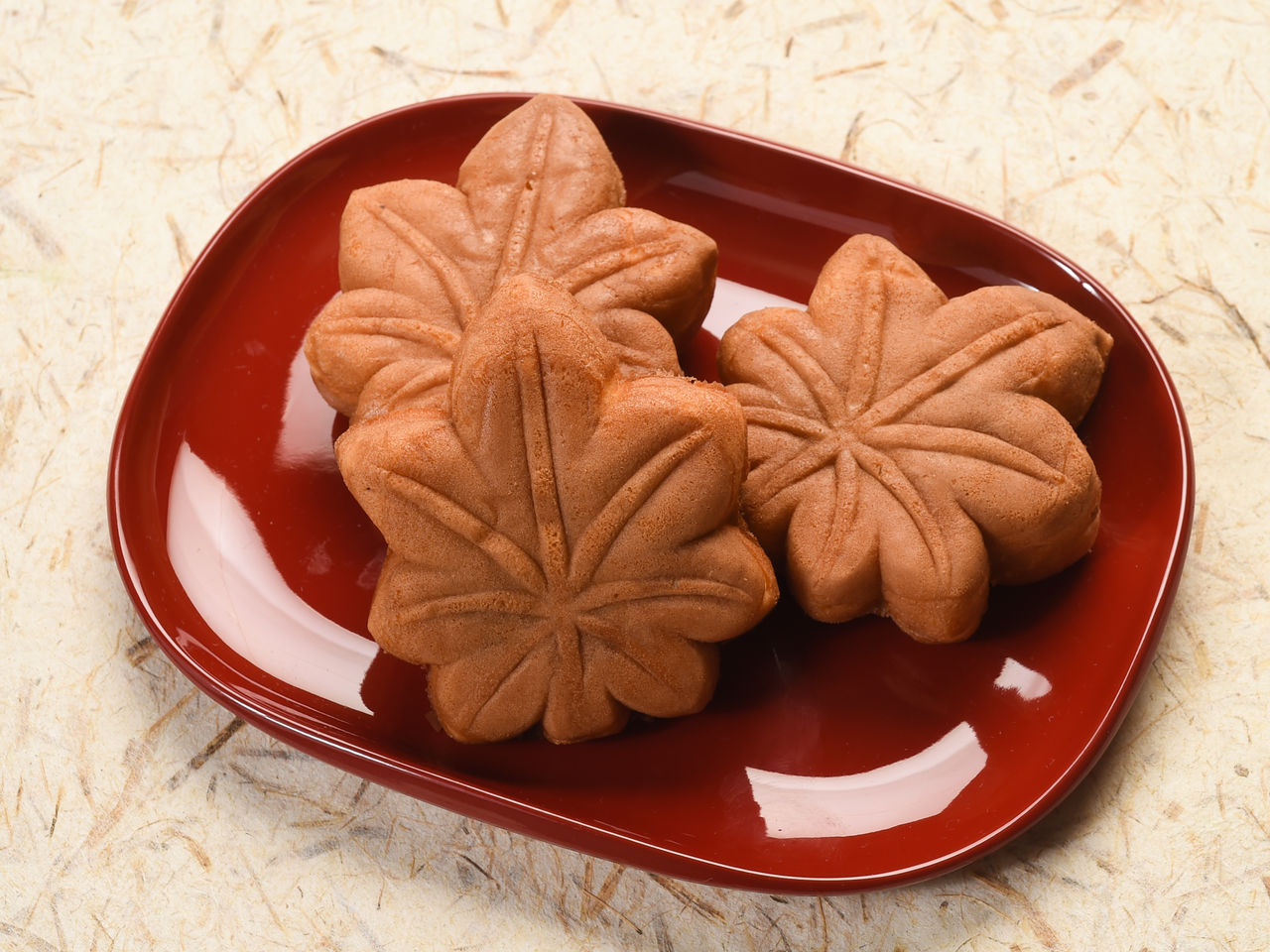 Located beyond Itsukushima Shrine, at the foot of Misen, Momijidani Park is a 20-minute walk from the bridge Miyajima Sanbashi, and is also serviced by ferries. Some 700 trees color the park in autumn, including a colorful variety of Japanese maples. The best time to see these is in mid- to late November. Near the Momijibashi bridge spanning the park entrance, you can enjoy the gorgeous site of the vermillion bridge rails setting off the autumn foliage. 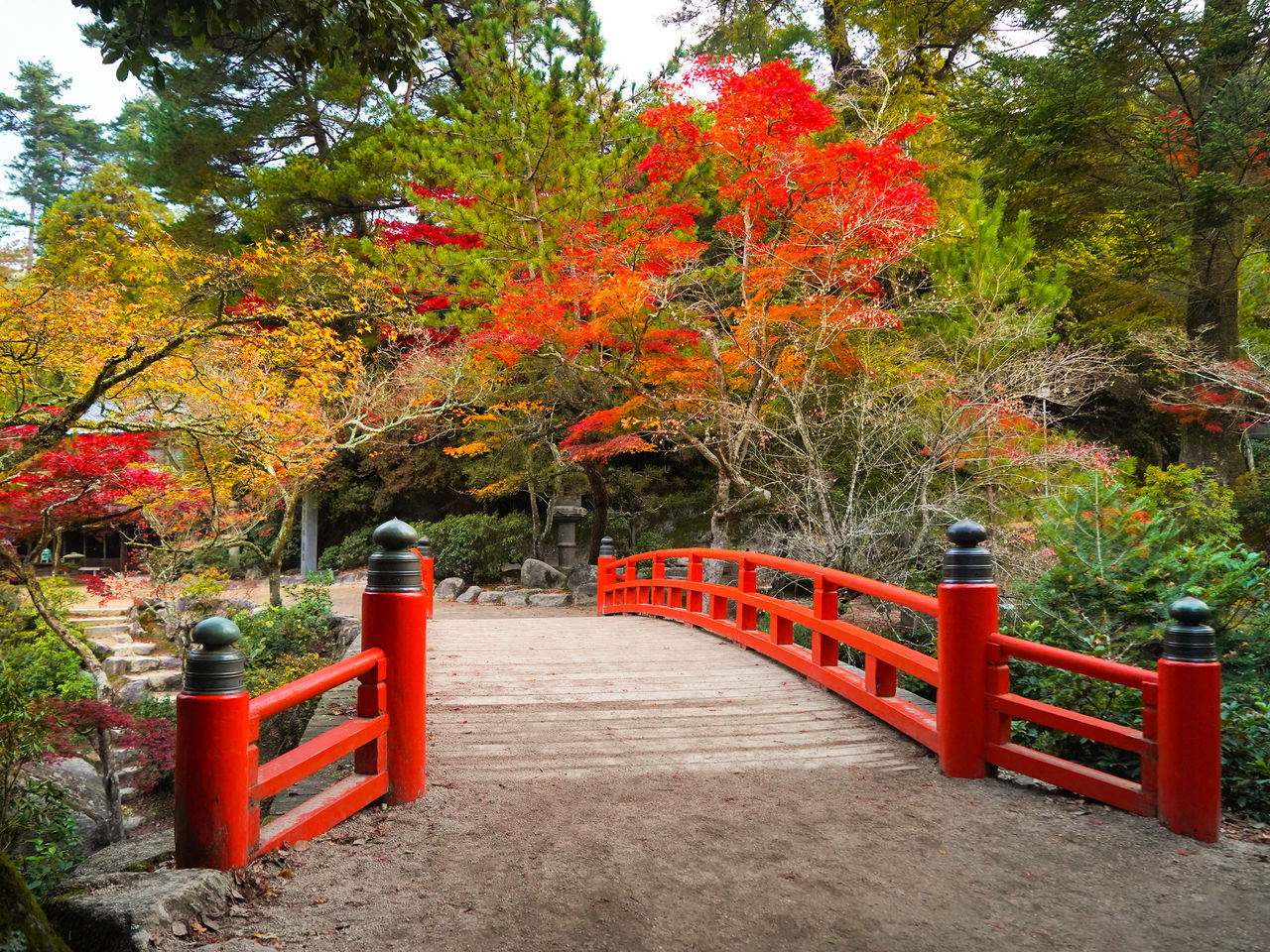 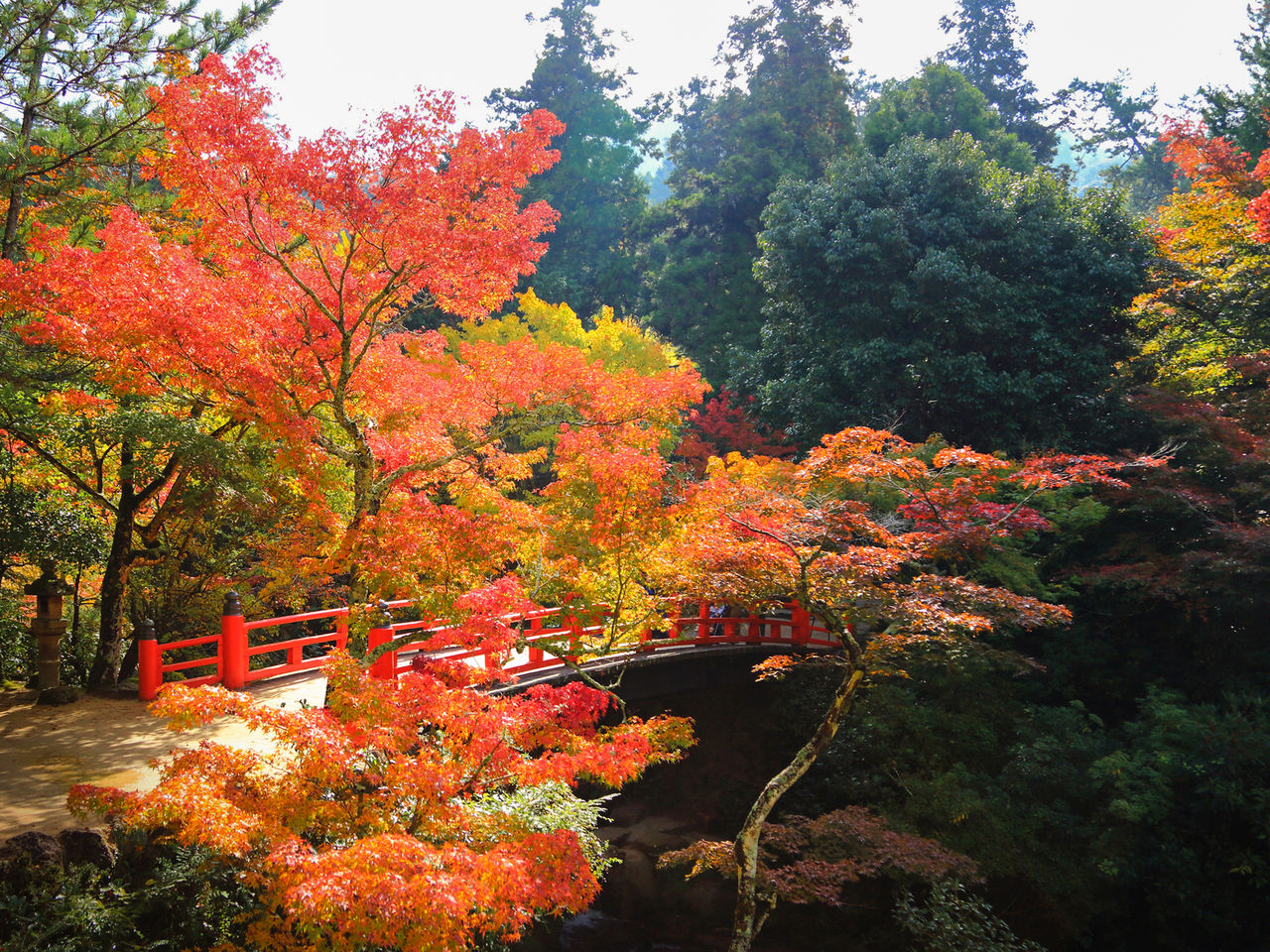 The bridge adds highlights to the natural beauty of the gorge.

The Natural Wonders of Misen

As you make your way farther through the park, observing colorful trees all along the way, eventually you arrive at Momijidani Station. Here you board the Miyajima Ropeway, which affords an aerial view of the sublime natural vistas of Misen, with autumn foliage visible here and there as well. A 10-minute ride takes you to Kayatani Station, where you change for the last stop, Shishiiwa Station, another four minutes away. 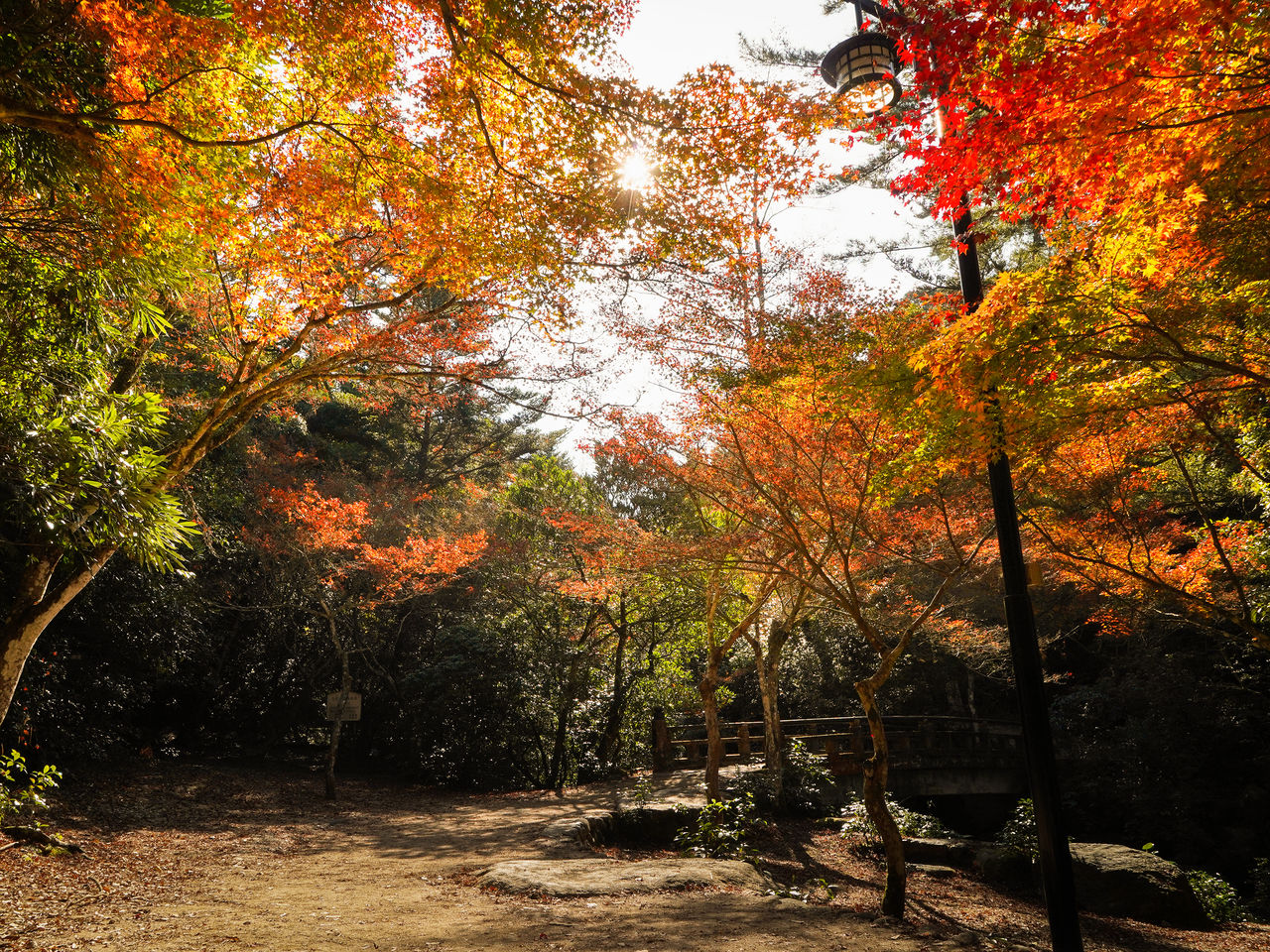 Strolling around Momijidani Park while passing through archways of autumn colors. 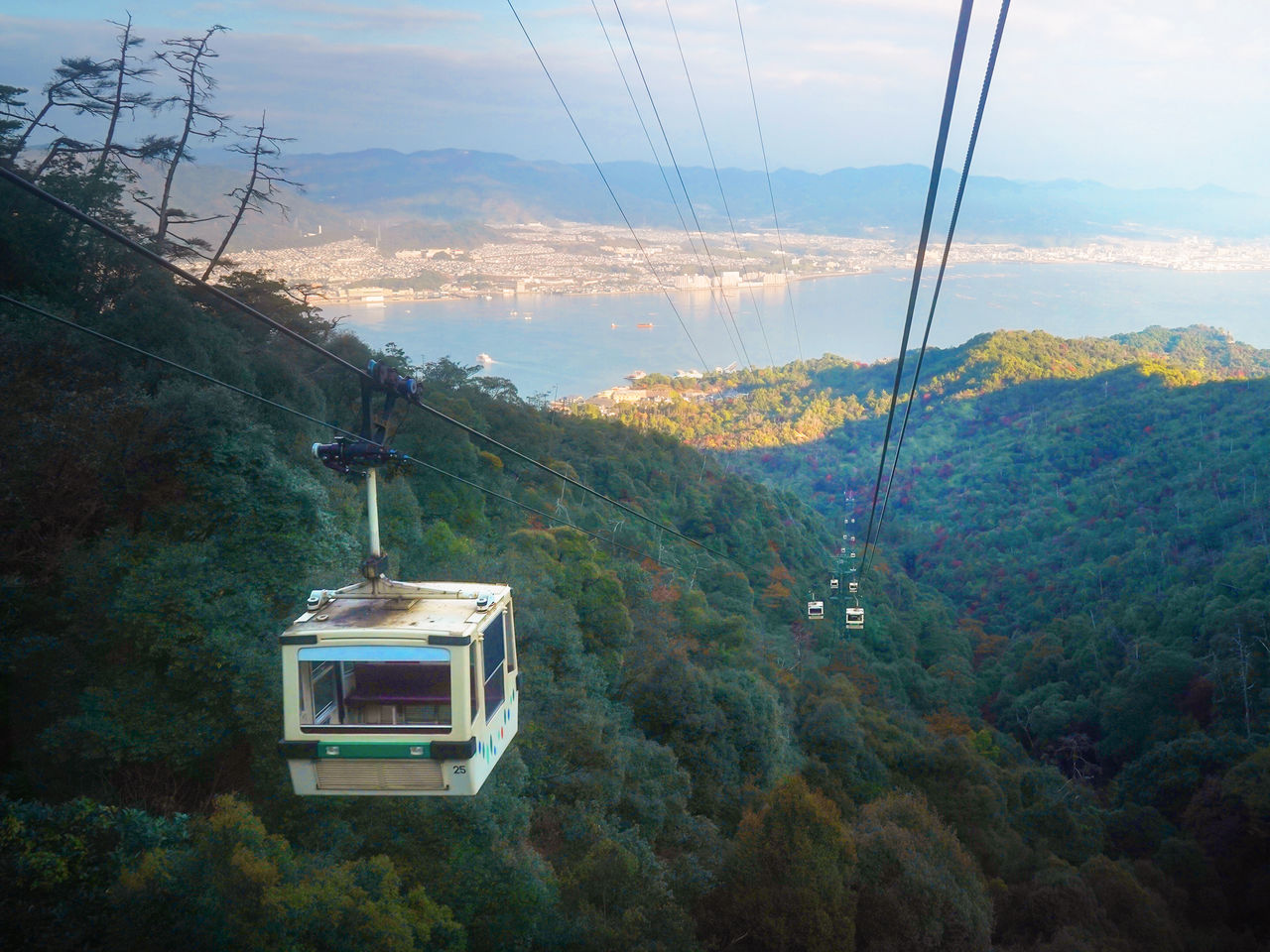 Honshū can be seen from the ropeway.

There are various sightseeing areas between Shishiiwa Station and the summit of Misen. The Shishiiwa observation deck, a scenic area on a par with the Misen observation deck at the summit, is near the station, offering a sweeping view of the islands dotting the Seto inland sea. 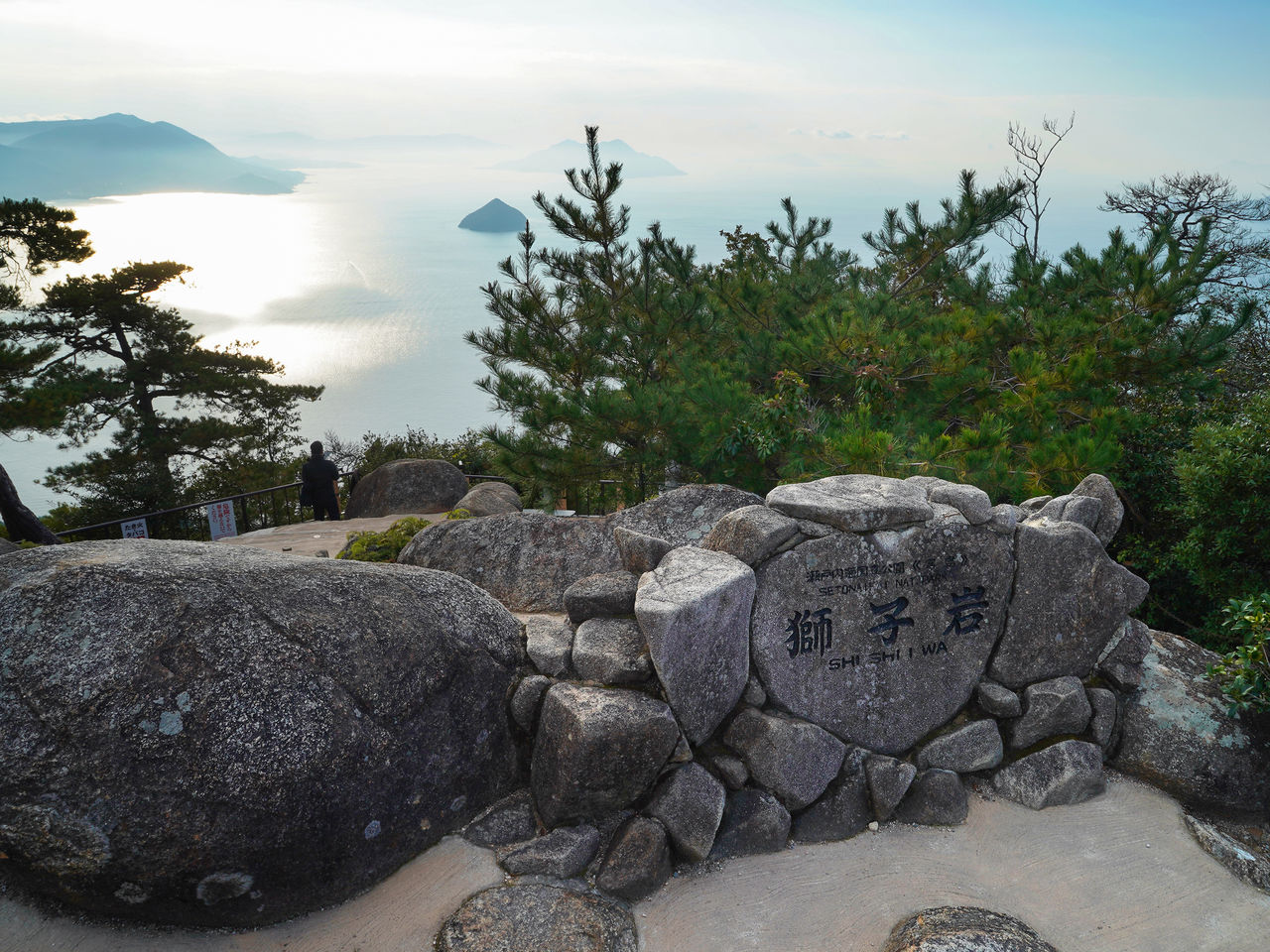 The beauty of the islands as seen from Shishiiwa observation deck.

Misen Hondō and Reikadō await worshipers a 20-minute walk from the station. Misen Hondō was established in 806 AD by Kōbō Daishi, and the flame housed in Reikadō is said to have burned continuously since Kōbō Daishi commenced his monastic training over 1,200 years ago. This “eternal flame” is one of the seven wonders of Misen, and the Flame of Peace in Hiroshima Peace Memorial Park was itself lit from Reikadō. 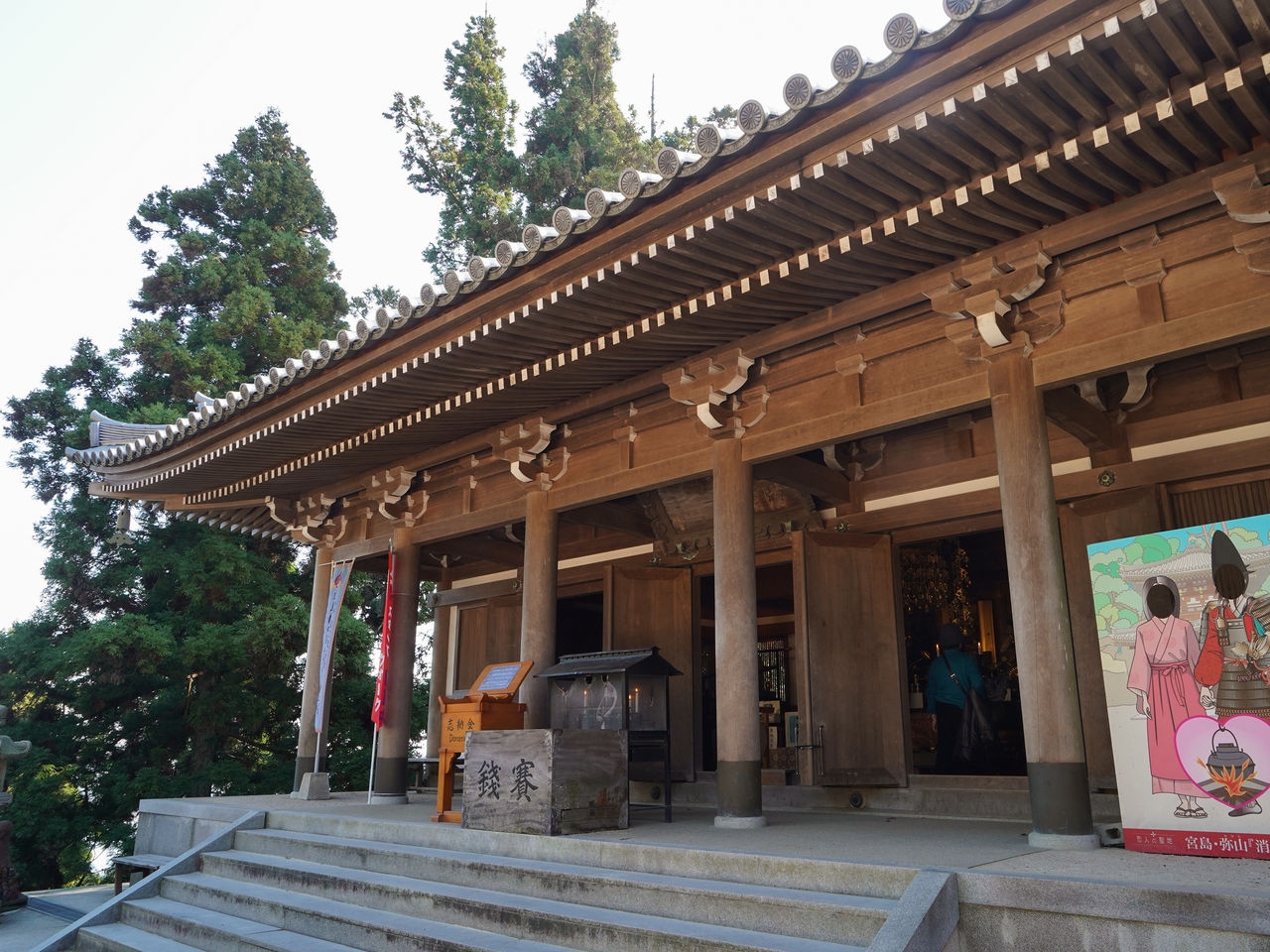 Misen Hondō has a great temple bell that is designated a national important cultural asset. 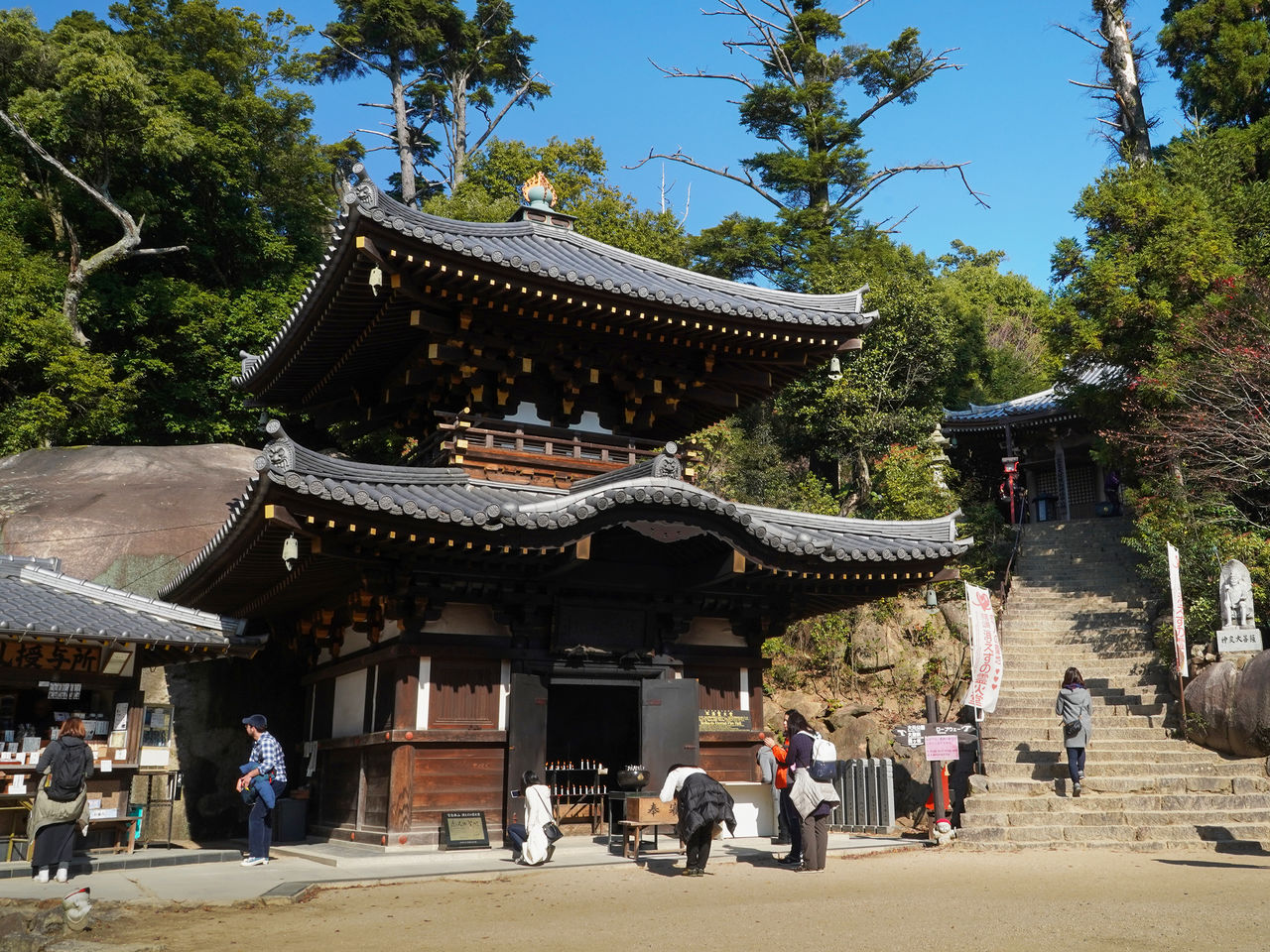 Reikadō is said to bring divine favor on matchmaking, in the sense that “the flame of love will not go out.” The site is recognized as a place sacred to romance. 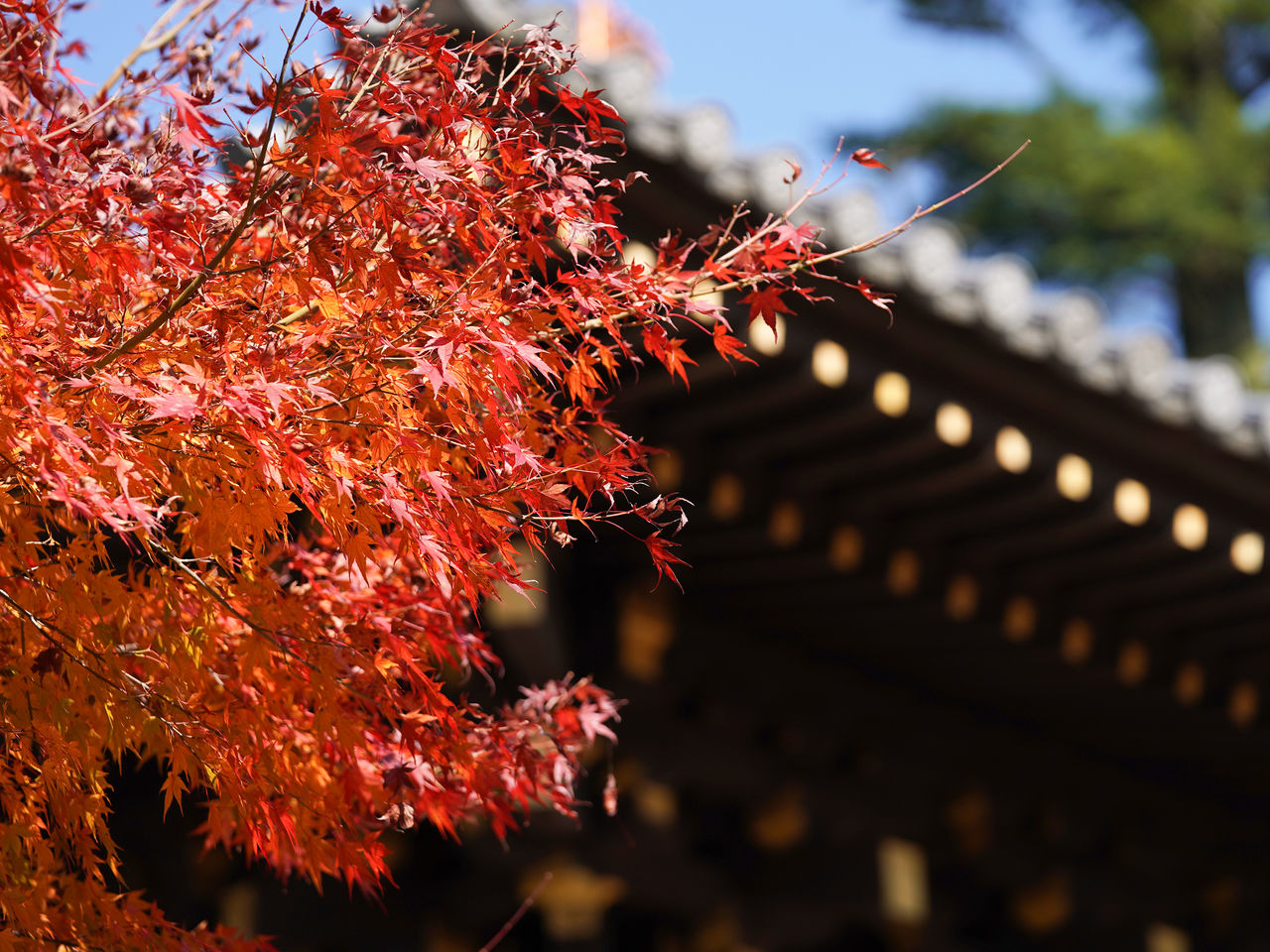 The bright reds of autumn near Reikadō.

Some 10 minutes after passing between the great rocks of Fudōiwa and Kuguriiwa, you reach the summit of Misen, 535 meters above sea level. The Misen observation deck, with more great rocks arrayed around the structure, affords a view of the islands in the Seto inland sea and the mountains of Shikoku. This magnificent vista was awarded three stars in the fourth revised edition of the Michelin Green Guide to Japan, published in June 2015. 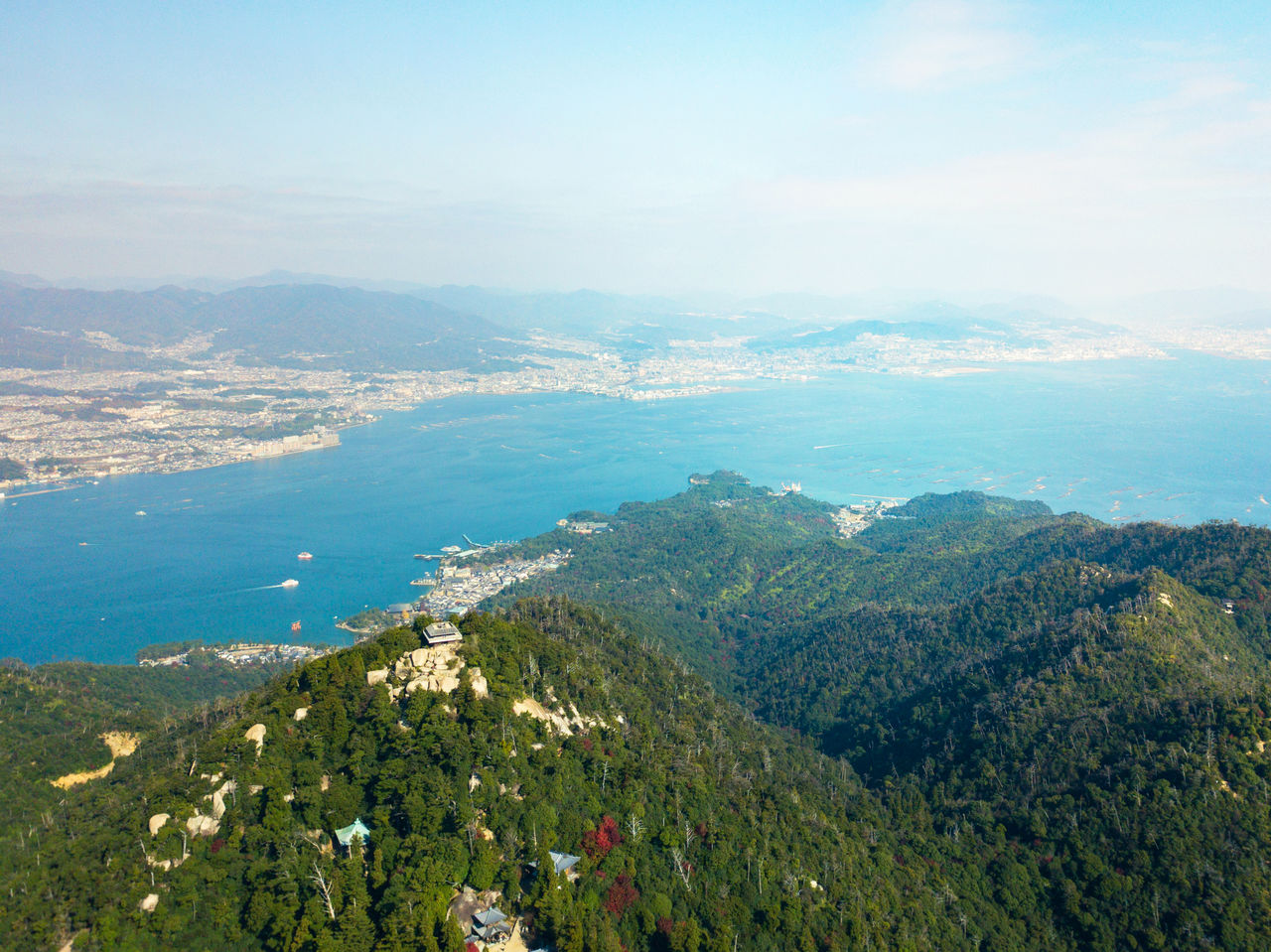 The Misen observation deck is on the left-hand peak, surrounded by gigantic rocks. 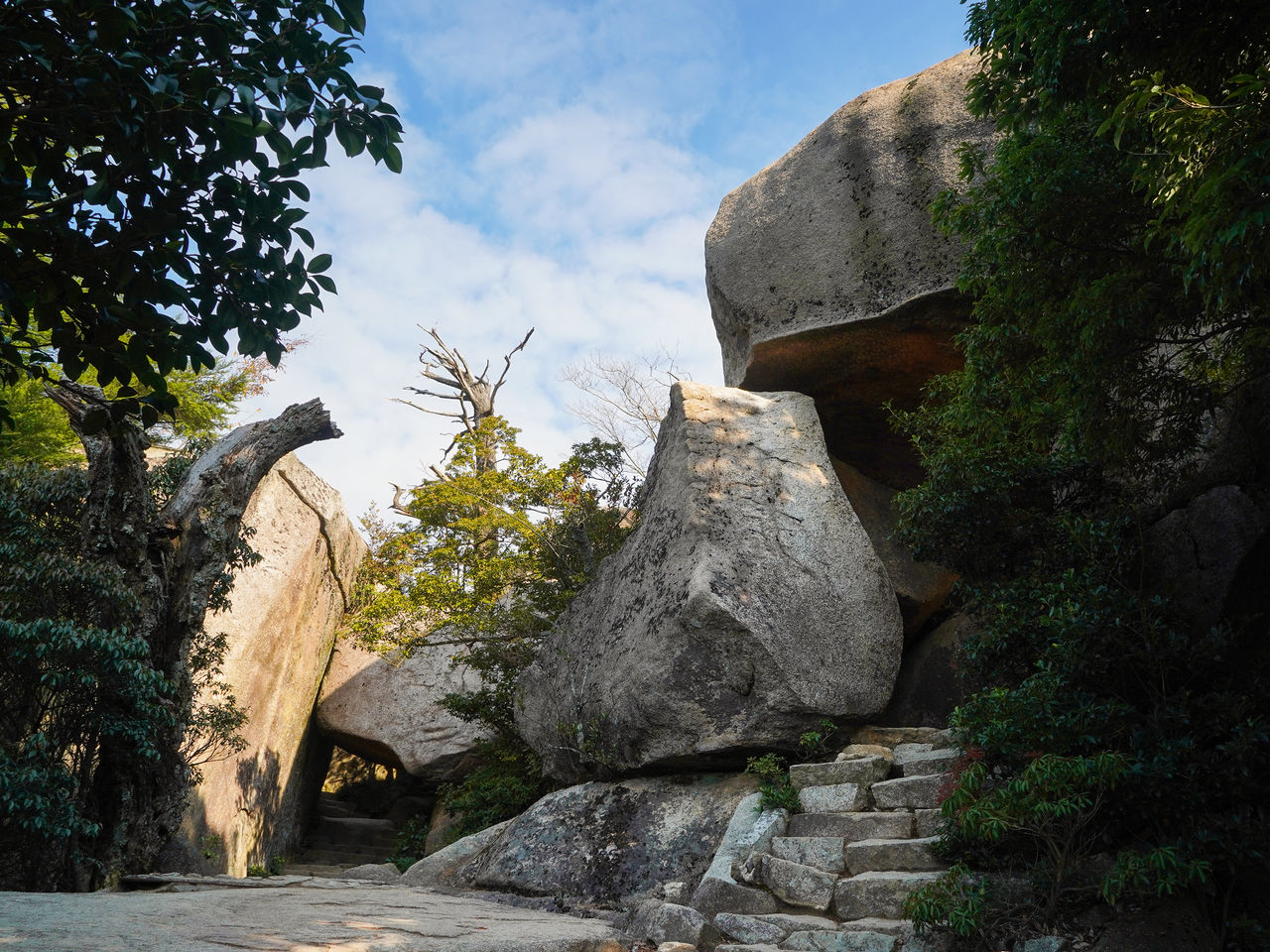 Hikers pass by the boulders Fudōiwa (at right) and Kuguriiwa on the way to the summit.

Other popular autumn foliage sites on Miyajima include the five-storied pagoda of Hōkoku Shrine, known for Senjōkaku, and Daishōin, a temple that hosts a festival of the autumn leaves. Challenging though it may be to pick the best time to see the autumn leaves here, Miyajima is worth seeing at just about any time, and rewards repeat visits. 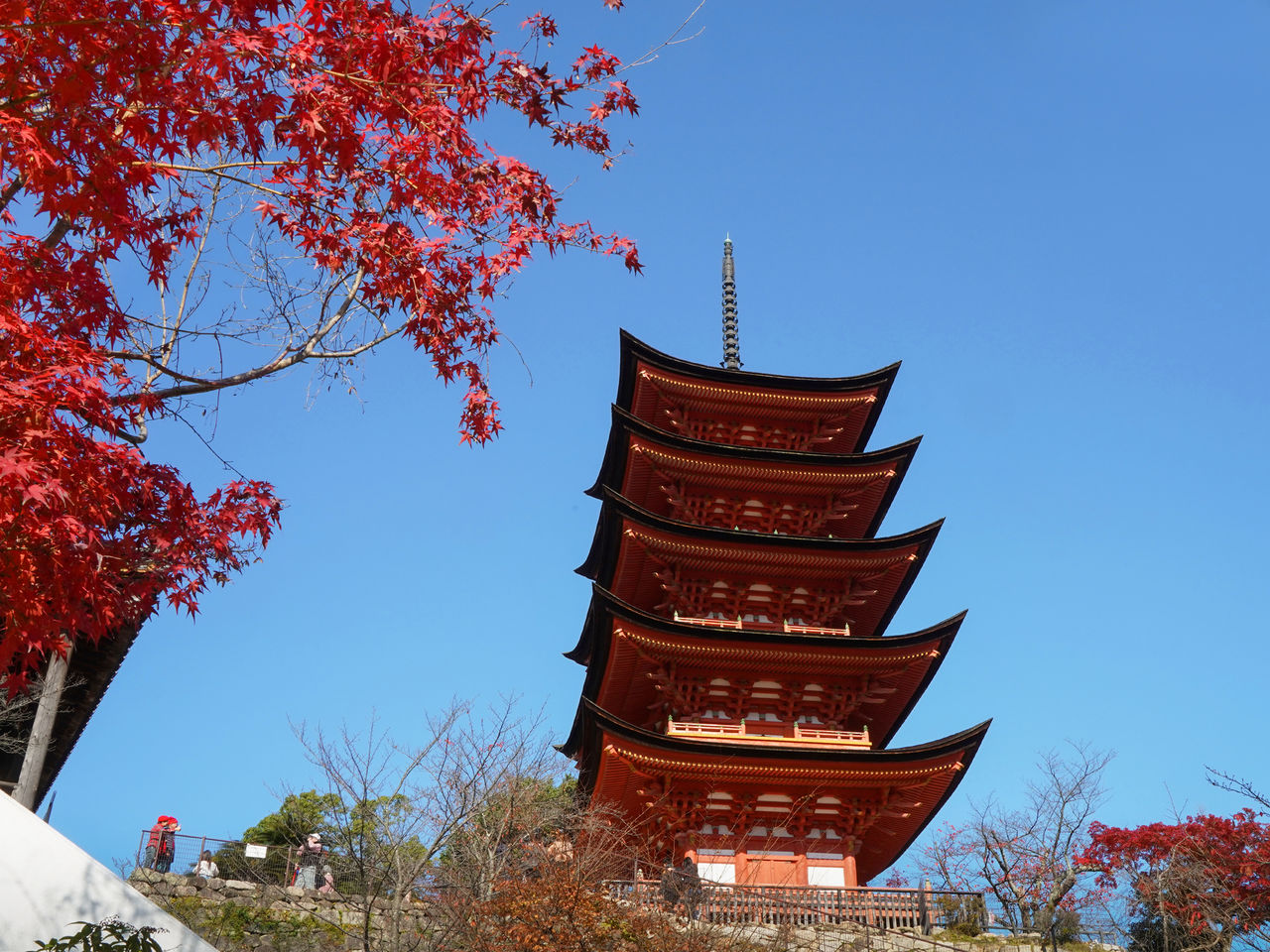 The five-storied pagoda of Hōkoku Shrine, seen through the autumn foliage. 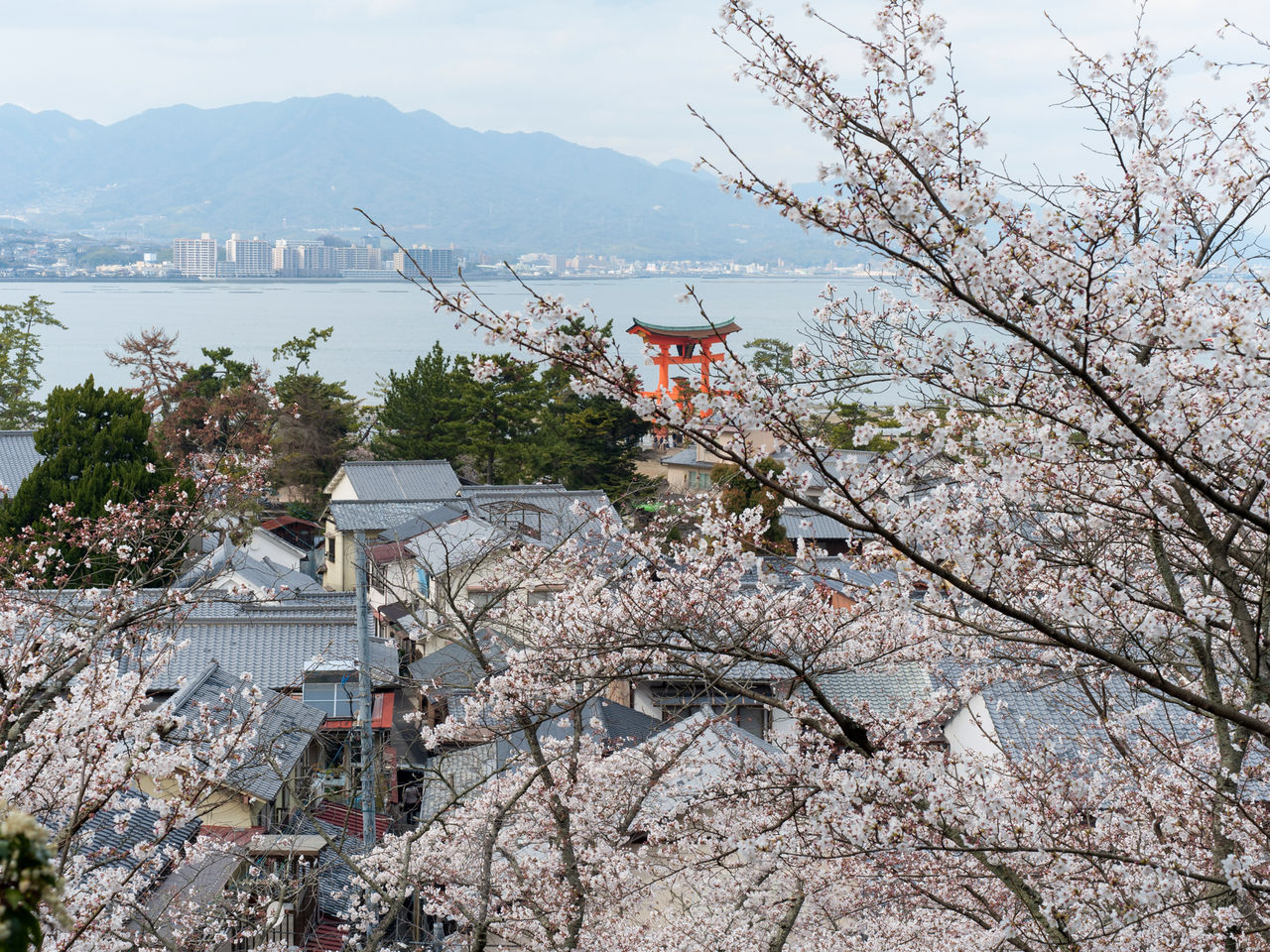 Miyajima is also worth seeing in springtime, when the cherries are in bloom.

(Originally published in Japanese. Photographs and text by Kuroiwa Masakazu.)