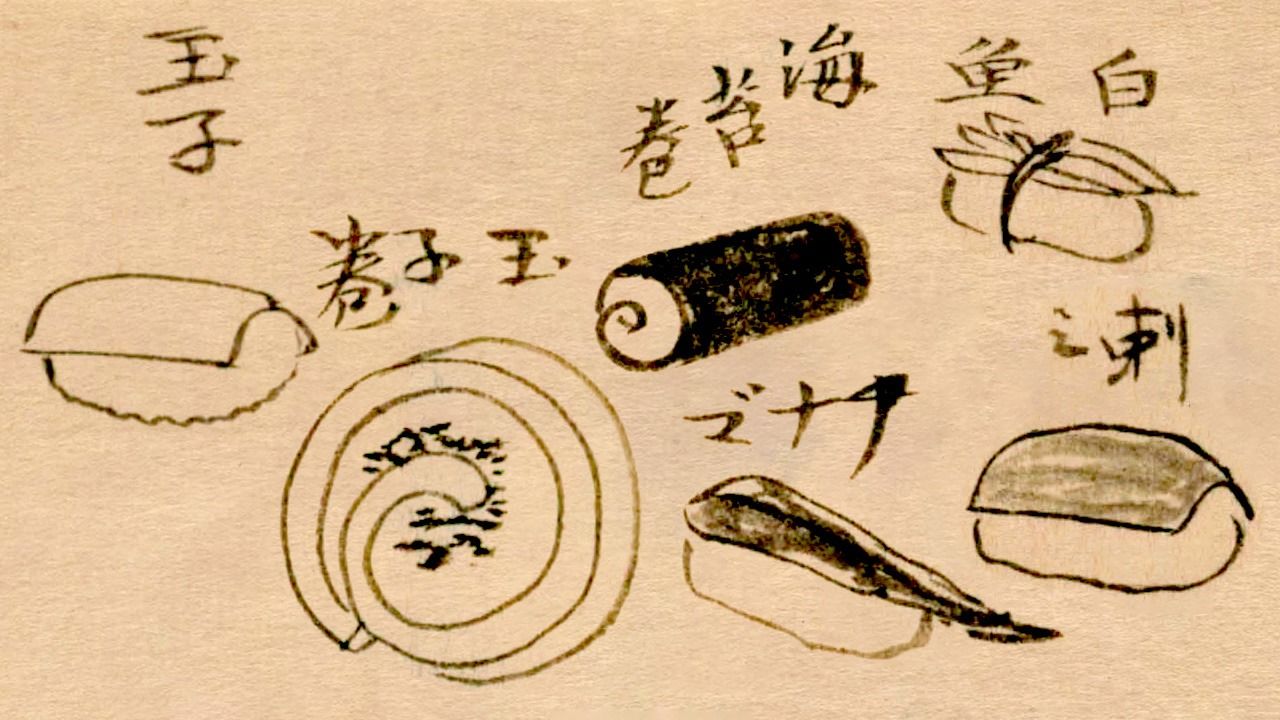 When Sushi Became a New Fast Food in Edo

Culture History Food and Drink Dec 22, 2020
In the early nineteenth century, a new kind of sushi boomed in popularity in Edo, whether eaten in restaurants, at the many night stalls, or after having it delivered.

The Origins of Modern Sushi

Kitagawa Morisada was a nineteenth-century writer who produced a compendious work contrasting west and east Japan. On the topic of sushi, he wrote that chefs in Osaka, Kyoto, and Edo (now Tokyo) all once made it by pushing vinegared rice into a rectangular box, putting the topping and the lid on, and then pressing down. This hakozushi is still popular in Osaka and Kyoto. However, from the early nineteenth century—50 or 60 years before Morisada was writing—the style was replaced in Edo by nigirizushi, the now internationally familiar method whereby chefs press the sushi into shape by hand. 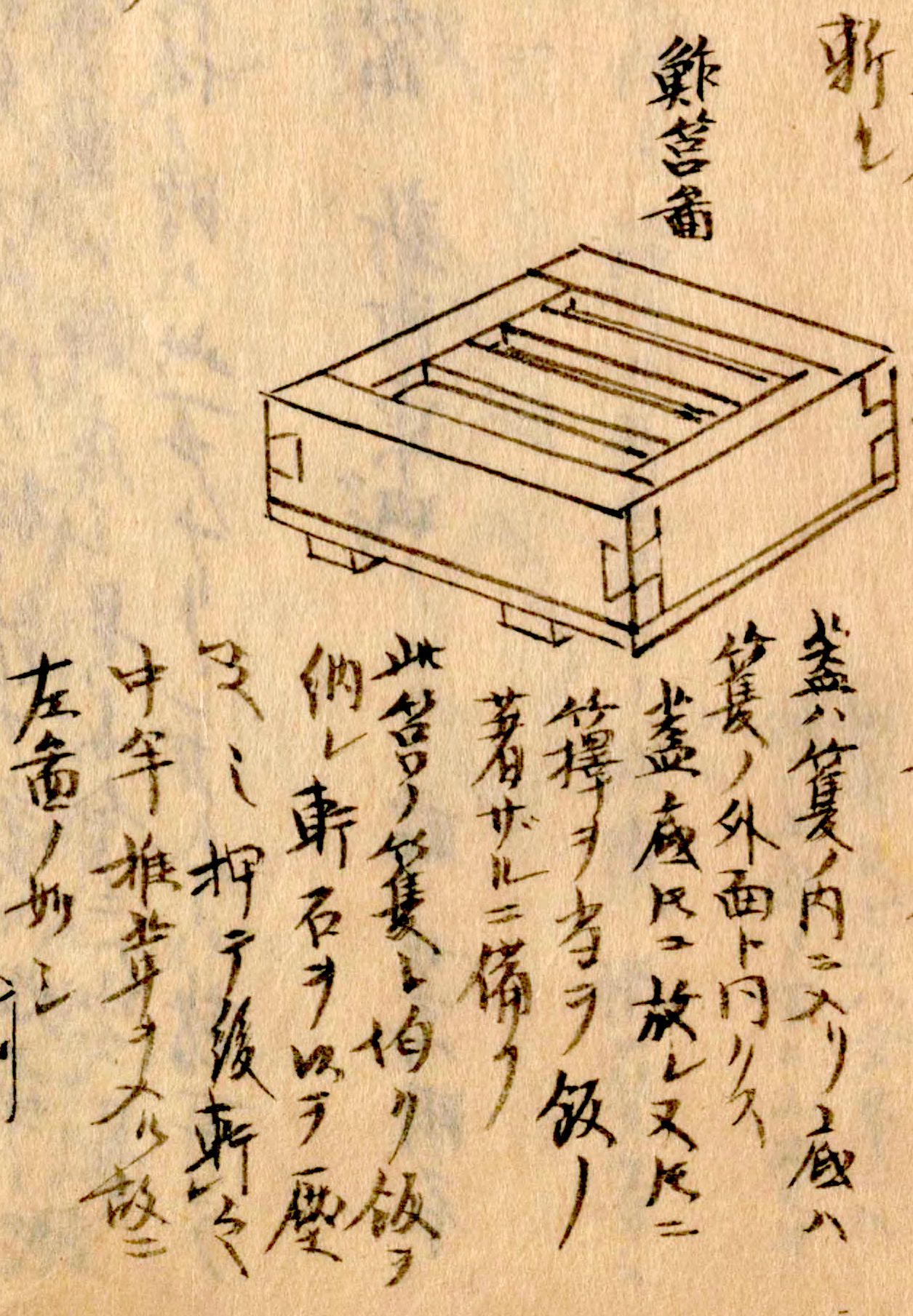 The hakozushi of Morisada’s time has not changed very much since. Toppings are laid on vinegared rice with a lid on top, and then it is pressed down by hand or with a weight. From Morisada mankō (Morisada’s Sketches). (Courtesy National Diet Library)

Morisada’s pictures of Edo nigirizushi include tamagoyaki (rolled omelet), shirauo (icefish), tuna sashimi, kohada (gizzard shad), and sweet anago (conger eel). There is also shrimp. This is almost the same as a typical Edomae sushi lineup today. It is rare to see icefish nigirizushi now, but in the Edo period (1603–1868) there were fertile shirauo fishing grounds around Tsukishima near Edo. Shōgun Tokugawa Ieyasu was said to enjoy the dish.

One piece of sushi was 8 mon and a tamagoyaki was 16 mon. If we take 1 mon as equivalent to ¥12, this means one piece was under ¥100. Compared with the two pieces for ¥100 on the cheapest plate at a contemporary conveyor-belt sushi restaurant, this is a little expensive, but still quite reasonable. The tamagoyaki was twice the price because eggs were a luxury item that cost from 7 to 20 mon—a somewhat different situation from today.

The nigiri form of sushi was invented by sushi chef Hanaya Yohei around 200 years ago. Morisada wrote of his famous shop Yohei-zushi in the Ryōgoku district.

The Great Kantō Earthquake of 1923 led to a falloff in customers, but the shop held a high reputation until it closed its doors in 1930. An 1883 book singled out for praise the shrimp sushi, tamagoyaki, and datemaki (a sweet rolled omelet made with fish paste).

At the time of founding, sushi with kohada firmed up by soaking in vinegar was taken out in okamochi wooden carrying boxes to be sold in the night streets. While Kyoto and Osaka often used mackerel in their pressed sushi, Edo offered the smaller and easy-to-eat kohada. It went down a treat with the local residents, known as edokko, and from there the menu expanded to include fresh shirauo, shrimp, and sweet conger eel. Eventually Hanaya started up a yatai food stall, but finding its size confining, he opened a full-fledged shop in 1824 in Ryōgoku.

In a residential area near Ryōgoku Station, there is a sign marking the birthplace of Edomae sushi. 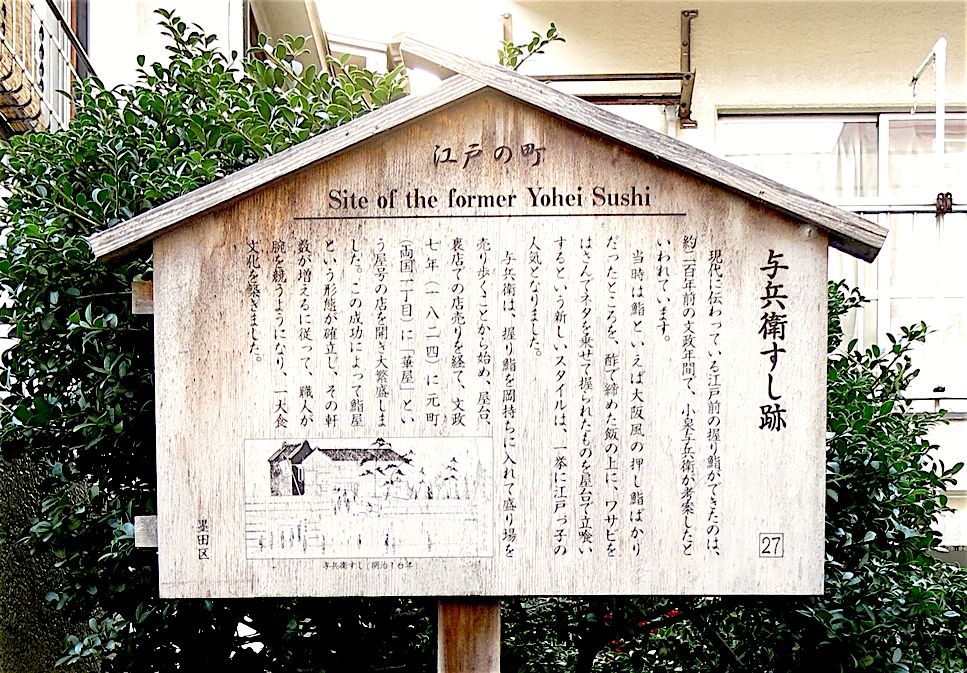 A senryū poem described the chefs at work.

Pressing sushi rice in the hand like an enchantment.

In their hand movements, sushi chefs seemed like wizards or shamans casting spells to the edokko of the time.

Yohei blazed a trail for delivery sushi and sushi shops. He also followed a fast-food business model in his yatai, where he could be seen as a forerunner to the conveyor-belt restaurants of today.

The fast-food aspect, with customers standing to eat at a yatai, is an interesting one. Morisada described how when night fell, stalls selling sushi and tempura were often thick on the ground. While the success of Yohei-zushi encouraged other shops to open, the paucity of land in Edo’s heavily populated districts made yatai a popular option.

Pictures of sushi stalls in the streets of Ryōgoku, Asakusa, and elsewhere can be found in the 1786 work Ehon Edo suzume (Picture Book: Edo Sparrows) by Kitagawa Utamaro. The option to order a favorite topping is the same as in a contemporary conveyor-belt restaurant. 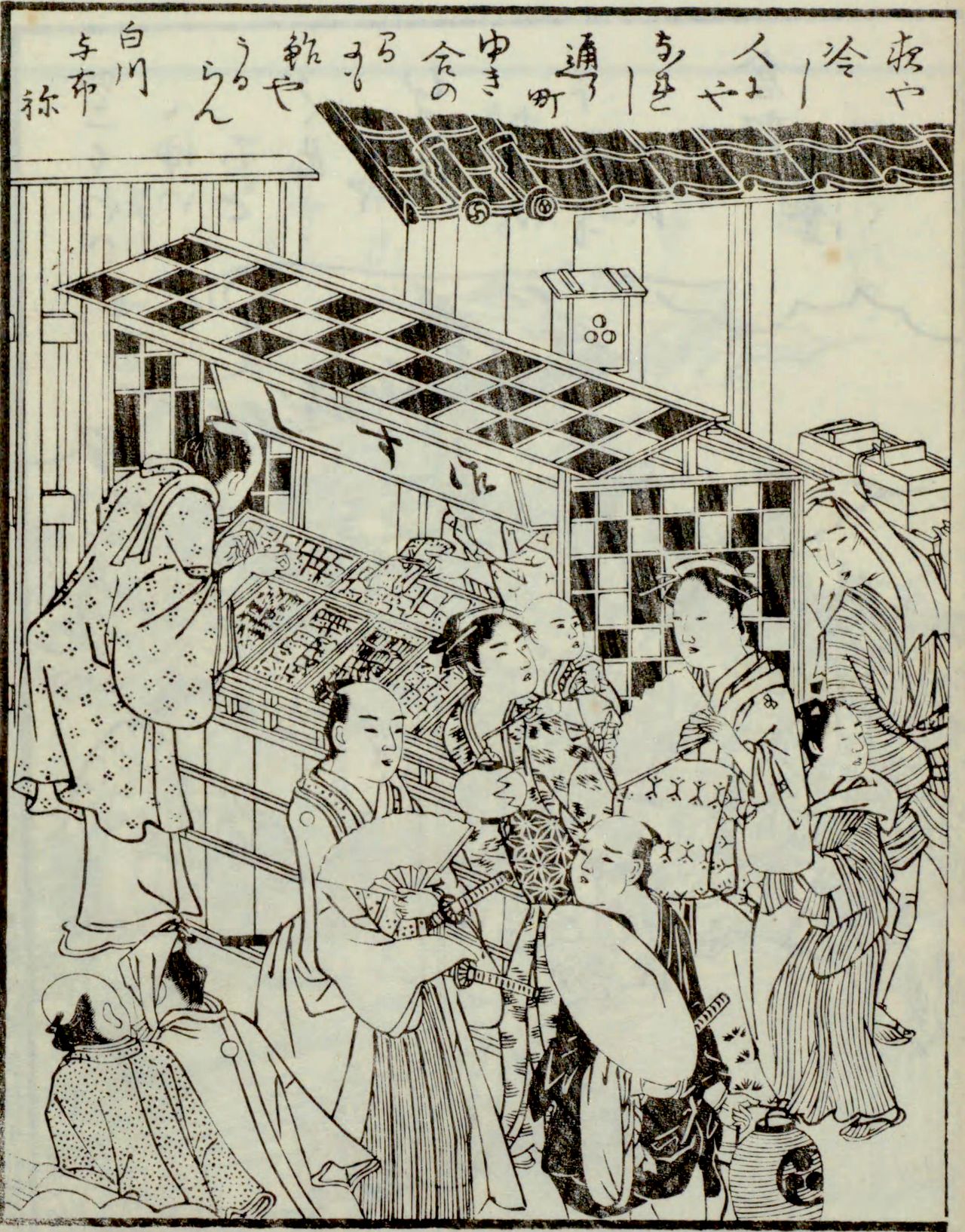 A sushi stall in Edo’s streets. Customers choose from the toppings on display, and the chef at the back makes the sushi for them. From Ehon Edo suzume (Picture Book: Edo Sparrows). (Courtesy National Diet Library)

There were also outdoor seasonal events at which sushi stalls made an appearance. Tsukimi (moon viewing) took place on the twenty-sixth night of the first and seventh months in the lunar calendar. Among the yatai lined up by the sea at the nijūrokuya-machi (waiting for the twenty-sixth night) festival in the Takanawa neighborhood were many selling sushi. 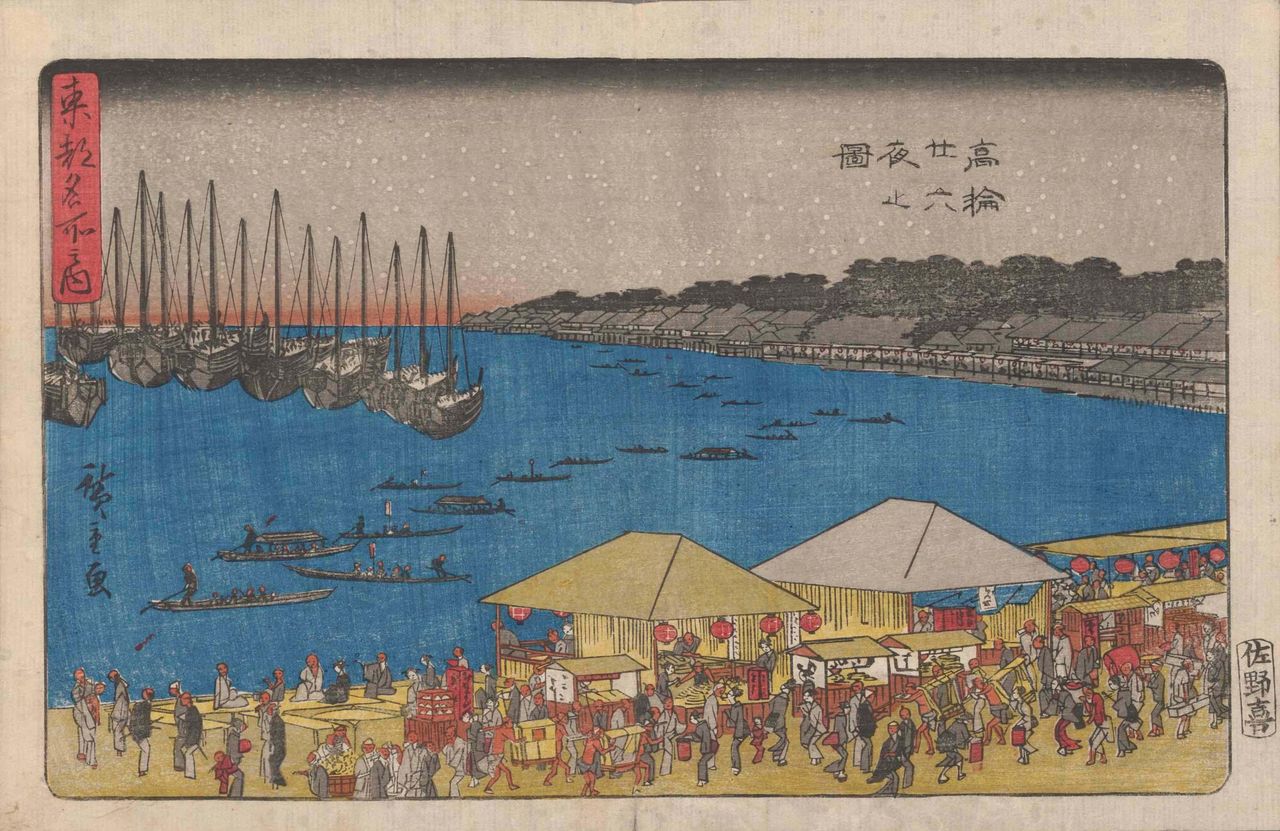 The nijūrokuya-machi festival in Takanawa. Just to the right of center, below the light-colored roof, a stall has a sign with the word sushi written in hiragana (すし). Tōto meisho no uchi: Takanawa nijūrokuya no zu (Famous Places in the Eastern Capital: Takanawa Twenty-Sixth Night) by Utagawa Hiroshige. (Courtesy Ajinomoto Foundation for Dietary Culture)

Morisada’s Sketches includes a picture of a deliveryman carrying nigirizushi boxes. On days when events were held, stalls would send out food to where people were sitting in the same way that pizza is delivered to revelers at contemporary hanami parties. 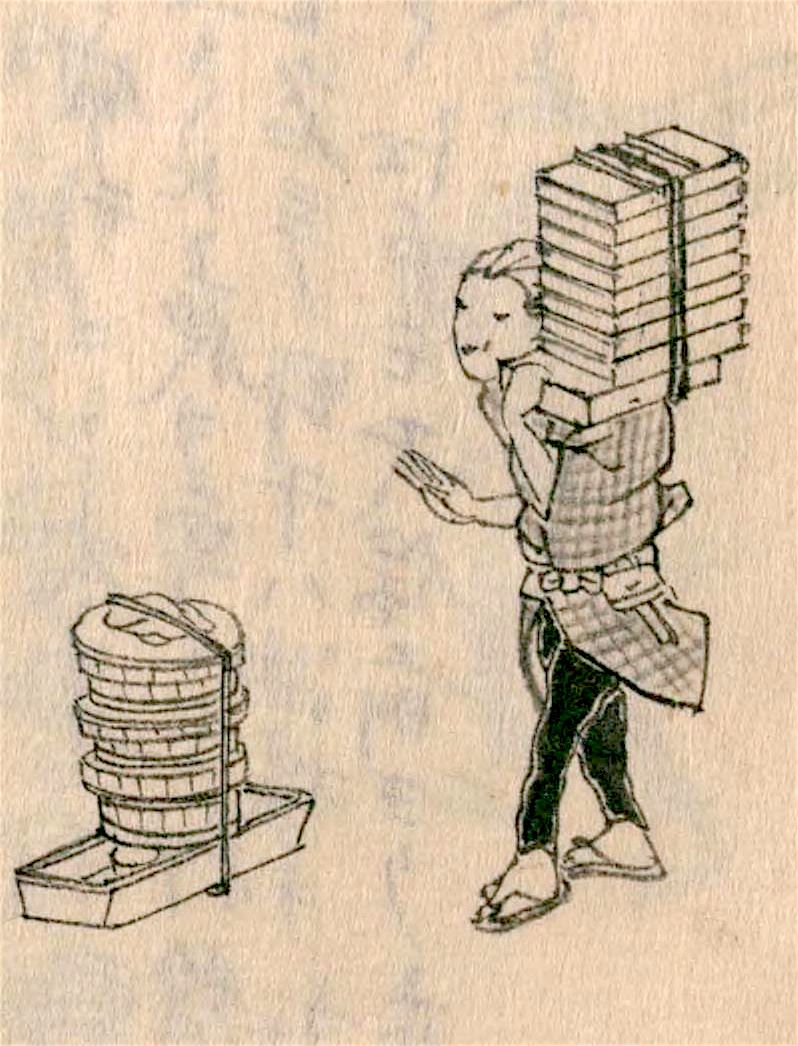 Two centuries ago, sushi businesses were already providing fast food and delivery services, fostering a lasting taste for the convenient cuisine among their edokko customers.