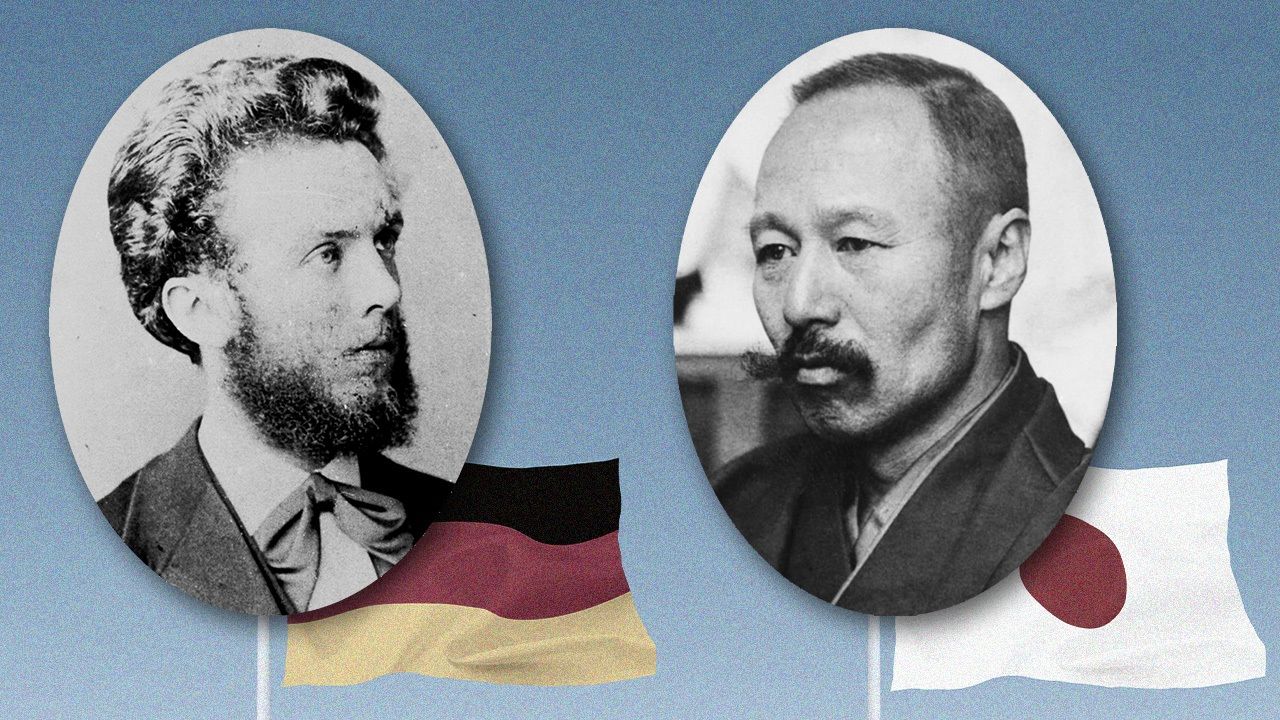 Politics History Dec 28, 2021
2021 marks the 160th anniversary of the formalization of ties between the Edo government of Japan and the Kingdom of Prussia. Prussia, and later Germany as a whole, exerted massive influence on Japan’s modernization. The exchange of people, including workers from abroad in medicine, law, and military affairs, had a profound impact on the formation of modern Japan. This momentous anniversary is the perfect opportunity to reflect on Japan’s and Germany’s special relationship.

Cheers for Japanese in Berlin

On July 28, 1914, the Austro-Hungarian Empire declared war on Serbia in protest of the June assassination of Archduke Franz Ferdinand (the so-called Sarajevo Incident). When Russia came to Serbia’s aid, Germany sided with Austria and declared war on Russia on August 1, 1914.

The world was in the early, tense, stages of World War I, but in Berlin, something strange was going on. Japanese people in the streets of the German capital were surrounded by people in circles of celebration, with some of them even being tossed into the air by rapturous crowds. The Japanese experiencing this included Yamada Junzō, who was staying in Germany as an employee of the Manchuria Railway, and the Marxist economist Kawakami Hajime, who was a professor at Kyoto Imperial University at the time.

These cheers appear to have been due to a rumor that Japan would join the fight alongside Germany. However, Japan actually ended up declaring war on Germany on August 23. It sent troops into German-occupied Qingdao, and Germans captured in that battle were sent to prisoner of war camps throughout Japan. Indeed, these POWs would go on to play a major role in fostering German-Japanese friendship. They introduced local residents to Beethoven’s Ninth Symphony (at Bandō in Tokushima Prefecture and Kurume in Fukuoka Prefecture) and the rotary-spit-baked cake Baumkuchen (at Ninoshima Island in Hiroshima Prefecture).

Despite how it turned out, though, in the early stages of the war, German citizens clearly believed that if Japan were to enter the war, it would naturally be an ally, and the disappointment and anger when Japan attacked was accordingly all the greater. The mistake helps to illustrates the overall friendly relationship the two nations previously enjoyed. Japan had learned much from Germany during its modernization, and Germany had seen Japan as a good student.

It has been 160 years since the Treaty of Amity, Commerce, and Navigation was signed between the shogunate in Edo and Prussia in January 1861. However, in 1861 Germany did not exist as a single state. Rather, the Kingdom of Prussia was the most powerful member of the Zollverein (a customs union of German-speaking states), and its representatives held negotiation authority designated by other member states, including Saxony, Hanover, and Bavaria, as well as cities of the Hanseatic League like Hamburg and Bremen. That authority allowed it to establish trade relations on behalf of each state, but the Edo government was reluctant to do so, and in the end the treaty was with Prussia alone.

This means that, in the strictest sense, the relationship between Japan and the nation-state of Germany dates back only 150 years, to the establishment of the German Empire in 1871. We can also look back at a history of exchange over a much longer span if we include figures like Engelbert Kaempfer, who came to Nagasaki in 1690 as a doctor with a Dutch trading expedition, or Philip Franz von Siebold, who served as a doctor and scientist at the official Dutch outpost on Dejima, Nagasaki from 1823.

Wherever we put the starting point, the history of Japanese-German relations is often seen as a friendly one, with few serious conflicts. The truth is, though, that the two countries have not always been on the best of terms, with antagonism and conflict arising during the Tripartite Intervention of 1895—in which Germany, France, and Russia stepped in to keep Japan from expanding its reach on the continent after the Sino-Japanese War of 1894–95—and in World War I.

More recently, German-Japanese relations have faced obstacles at some important milestones. In 2011, which marked the 150th anniversary of the treaty, many commemorative events were canceled because of the Great East Japan Earthquake, and with the COVID-19 pandemic raging for the 160th anniversary, many in-person exchange events have been called off. 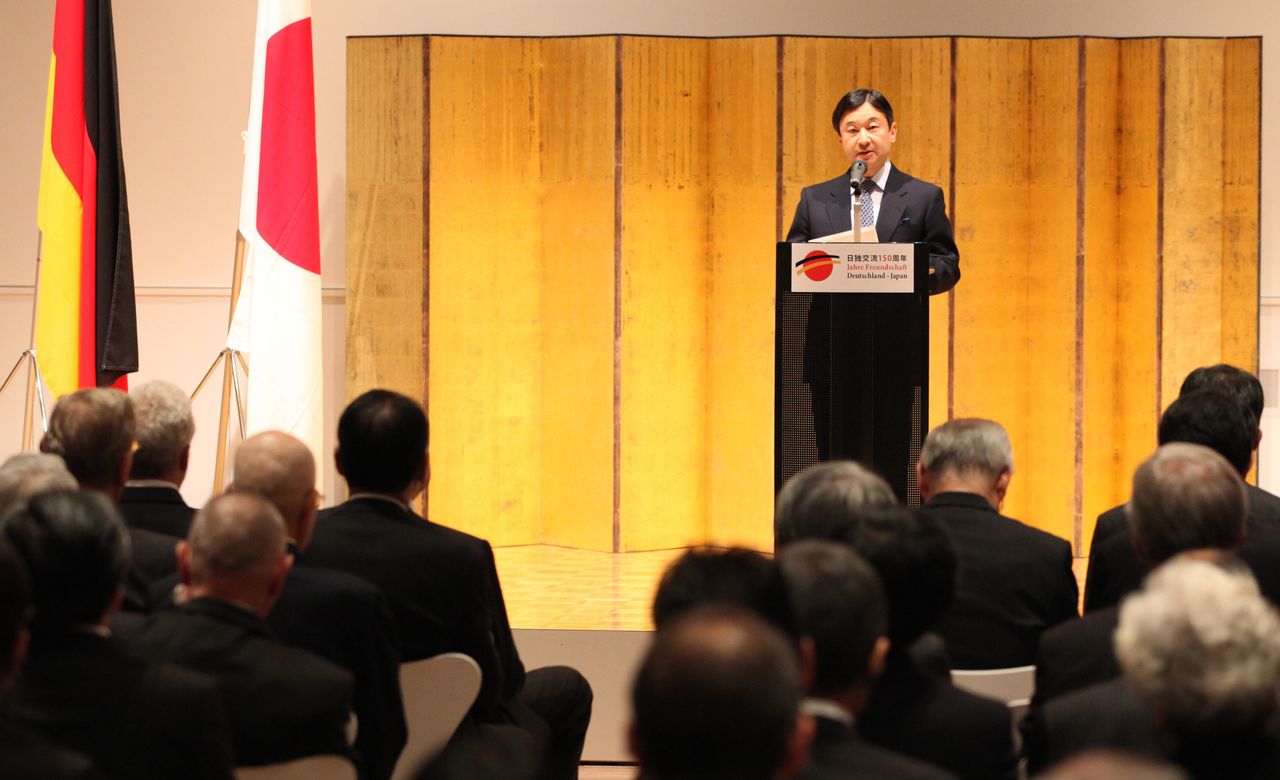 Crown Prince Naruhito (now emperor) offering a speech on the 150th anniversary of the Japanese-Prussian Treaty of Amity, Commerce, and Navigation , on January 24, 2011. (© Jiji)

Still, for 2021, the Japanese Embassy in Germany, the German Embassy in Japan, the Japan Foundation, and other organizations organized symposia, exhibitions, and concerts, mostly online. The topics covered a variety of fields, including arts and culture, economics, diplomacy, defense, and new issues related to the pandemic. Even with a history of challenges, the two countries continue to cooperate and share their wisdom to overcome them, and the new developments of the past year seem to offer a concentrated version of this cooperation.

Many scholars say it was the Iwakura Mission’s diplomatic visit to Germany in 1873 that prompted the Meiji government to adopt Germany as a model for modernization. However, Japanese scholars had been studying the German language in earnest since 1860, and the German nations had attracted intellectual interest in education, military affairs, and medicine, as well, as people traveled between the two nations.

The Edo government sent its first ambassadorial mission to visit six nations on the continent, and the mission went to Berlin in 1862. Mission member Fukuzawa Yukichi expressed his admiration that the Prussian government offered education even to prisoners. At the end of the Edo period, the Kishū clan invited Carl Köppen from Prussia to begin offering military training, and the Aizu clan sent Majima (later Komatsu) Seiji to study medicine at the University of Heidelberg.

That same period also marks a common awareness of the quality of books written in German—particularly medical books—and from 1869 the Meiji government decided to introduce German-based medical education on a broad basis. These facts all reflect the foundation for Japan’s policy of focusing on Germany, one that was further shaped by the Franco-Prussian war, the establishment of the German Empire, and the Iwakura Mission.

The Meiji government began top-down modernization and saw Germany, as an emerging European power, as more approachable for sharing military information and technology than either Britain or France. Many German professionals came to Japan as oyatoi gaikokujin (hired foreigners), and many Japanese citizens traveled to Germany to study. Shinagawa Yajirō (1843–1900) and Aoki Shūzō (1844–1914) were influential in selecting participants in these programs, particularly Aoki, as he had married a German woman and had widespread connections in many fields in Germany.

Famous working Germans include geologist Edmund Naumann, who first identified the Fossa Magna geologic feature after a series of surveys throughout Japan; Erwin Bälz, who became a teacher at the Tokyo Medical School and an attendant physician for the Imperial Household Ministry, developed a skin lotion known as Bälz Water, and also found fame for his analysis of Kusatsu hot spring water effects; Hermann Roesler, a legal scholar who was influential in drafting the Meiji constitution; and Jakob Meckel, a Prussian general who transferred to Japan’s Army War College in 1885 and helped convert the military from the former French system to the German one.

Others include the economist Karl Rathgen, who also studied law and political science, and introduced the first seminars to Japanese universities. Historian Ludwig Riess helped bring modern historiography to Japanese universities. Educator Emil Hausknecht came to teach at the Imperial University of Tokyo in 1887, where he was in charge of German studies, and later Japanologist Karl Florenz continued his research on the country while training Japanese Germanists.

The natural sciences were also well represented. Gottfried Wagener, who studied under the mathematician Carl Friedrich Gauss, was instrumental in helping Japan join the Vienna World’s Fair in 1873 and assisted with research and development in Japan’s traditional pottery field, including studies of fired ware like Aritayaki porcelain and Kyōyaki stoneware, as well as Shippōyaki cloisonne ware. Curt Netto taught mining techniques in Akita Prefecture, while Erwin Knipping set up meteorological observation facilities throughout Japan, helping to achieve Japan’s first weather forecast in 1883. In the transport and infrastructure fields, Hermann Rumschöttel was influential in building railways in Kyūshū, while Franz Baltzer helped plan the express rail line between Shinbashi and Ueno. Artistic exchange was also deep. Franz Eckert, formerly a member of a naval band, helped popularize Western music in Japan, and Russian-German Raphael von Koeber taught piano at the Tokyo National Music School in addition to teaching German philosophy and aesthetics.

Of course, many other Germans have come to Japan, and professionals came from many other nations, as well, including France, Britain, the United States, and Italy. Among the most famous were Guido Verbeck (of Dutch descent), who helped formulate basic government policies on education, military conscription, and other subjects immediately after the 1868 Meiji Restoration; Gustave Émile Boissonade, who introduced French civil law; and Edward Morse, an American zoologist who discovered the Ōmori shell mound.

Verbeck was particularly important in helping direct the Meiji government’s future by advising a focus on German medicine and the dispatch of the Iwakura Mission, which helped secure the German-focused tendencies of the fledgling state.

Honest Talk is Proof of Friendship

It is also interesting to note that as exchange between Japan and Germany progressed, knowledge from Western countries flowed into Japan via the German language, and German culture spread to East Asian countries via Japan. Many works of important European writers made their way into Japan through careful translation from their German editions, as with Mori Ōgai’s translation of Hans Christian Andersen’s book Improvisatoren (The Improvisatore).

Also, Guo Moruo, who studied German in Japan when he came from China to study medicine, translated the works of the German literary giant Johann Wolfgang von Goethe into Chinese, using Ōgai’s Japanese translation as a reference.

The differing perspectives of Japan and Germany did, however, lead to occasional controversy, as when Bälz criticized that Japan was merely enjoying the fruits of Western development by adopting German technology and learning; or when Naumann claimed that Japan was a passive player in its own modernization, which was being driven by outside pressure, a claim that Ōgai refuted. There was also controversy between Florenz, who translated Japanese waka poems, and the Japanese linguist Ueda Kazutoshi. However, I believe that these kinds of open disagreements indicate of the depth of the relationship between the two countries.

On the contrary, German-Japanese relations in the 1930s teach that uncritical praise, devotion and attachment to any one country can be harmful overall and sometimes even lead to national destruction. As Ōgi Takeshi offers in his book Nichidokui sangoku dōmei (The Tripartite Pact), pro-German factions in the Ministry of Foreign Affairs and the Army occasionally countermanding governmental policy to align with Germany guided the way to the Japan-Germany alliance, which antagonized the United States, Britain, and the Soviet Union, and thus led to Japan’s downfall. That is a history lesson that fans with excessive affinity for Germany would do well to remember.

Although 2021 was one more year consumed by the pandemic, I hold out hopes that Japan-Germany exchanges can once again move ahead, and in 10 years we can celebrate 170 years of Japanese-German relations.

Sites for the 160th Anniversary of Japanese-German Relations