Keeping Mount Fuji at the Peak of Beauty

Society Culture Lifestyle Jul 29, 2013
Mount Fuji has always been spectacular at a distance. But up close an excess of garbage has tarnished its beauty in recent years. This problem sparked a movement to clean up the mountain and conserve its natural environment. It’s an effort that’s more important than ever now that Mount Fuji has become a World Heritage site.

Few would argue that Mount Fuji is one of the most majestic sites in Japan. Other composite volcanoes of similar height exist elsewhere in the world—like Mount Kilimanjaro in Tanzania and Mount Ngauruhoe in New Zealand, both of which were registered as World Natural Heritage sites some time ago. Despite Mount Fuji’s arresting appearance, though, there were questions about whether it truly merited the designation as a World Heritage site, given the large amount of human-generated waste and garbage on and around the mountain. 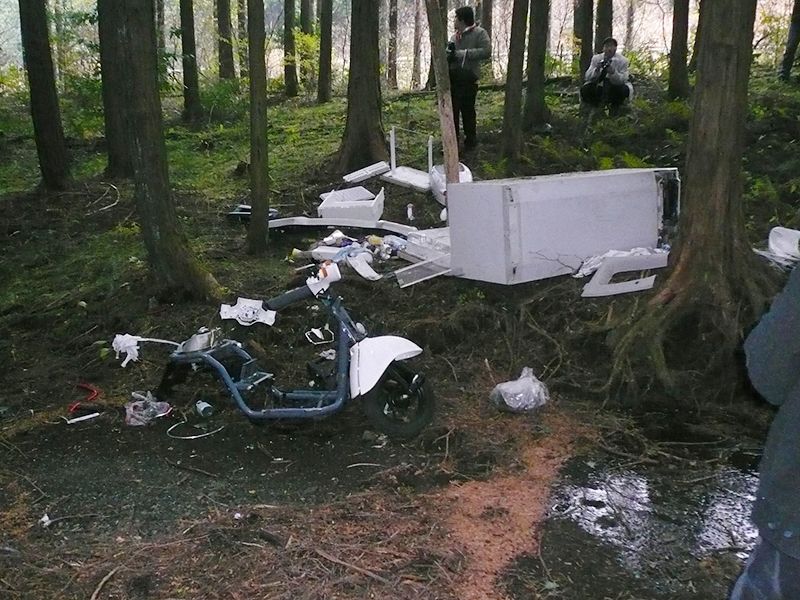 Starting back in 2005, steps were implemented to clean up Mount Fuji. Prior to that, public toilets around the mountain and at the peak simply let human excrement run downhill. At that point, sewage ran down the mountain’s surface from the peak, leaving a horrid stench in its wake. Mixed with the toilet paper, this disgusting flow was often called the “white river.”

Empty cans and discarded cigarette butts also littered the trails leading up to the summit, with little awareness among hikers of the garbage problem. Scum and garbage even floated on the surface of the “sacred waters” that flow from the springs in the Asama Shrine, located at the summit. Below the fifth station, which is about half way up the mountain, large items such as electrical appliances, motor bikes, and cars were illegally dumped near routes and paths.

Anyone who looked at Mount Fuji from a distance in those days could feel a certain reverence for its magnificence, but a closer look made it difficult to view it as a “sacred mountain.” Did the Japanese of just 10 years ago really care so little? Did the people who dirtied the mountain have no love for it at all?

Thankfully, people who really love Fuji do exist. There are many people in the area who have been engaged in efforts to clean up the mountain and preserve the natural environment. And, in fact, they have been involved in this work well before the drive to make Mount Fuji a World Heritage site. For example, the nonprofit organization Fujisan Club, founded in 1998, brings together a total of 6,000 volunteers who participate in cleanup operations held 60 times a year. The amount of trash that the volunteers collect is formidable—57 tons in 2009 alone. Volunteers who participate in activities like these are of all ages and come from a wide variety of businesses, schools, and other organizations. 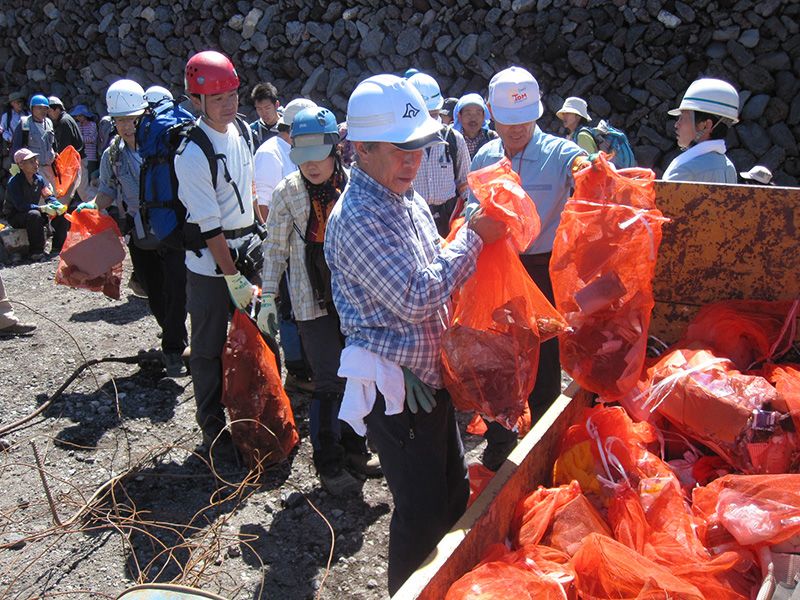 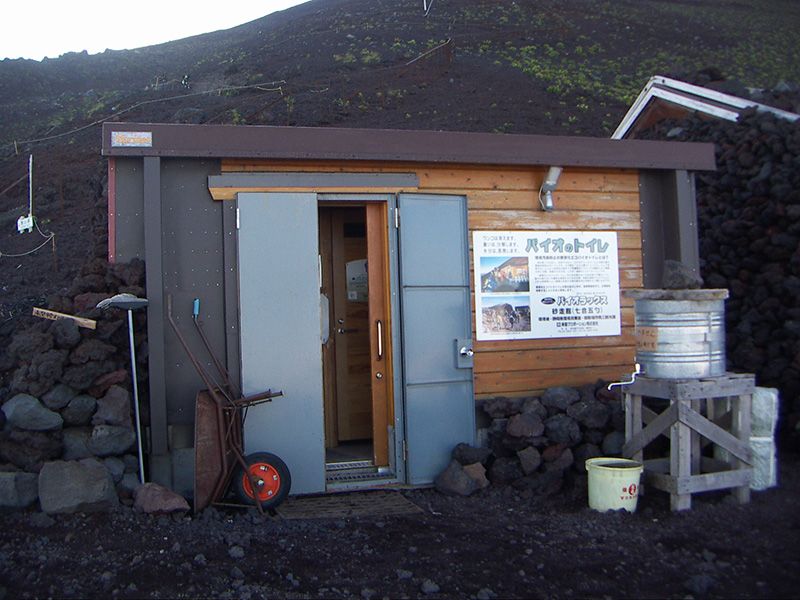 The Fujisan Club has also made huge strides in tackling the “white river” problem. From 2000 to 2002, the organization implemented the Mount Fuji Toilet Cleanup Project to install composting toilets up and down the mountain. Chipped cedar is packed into the toilets, which helps to break down the excrement. In addition to making improvements so that the toilets could function in severe weather conditions, the volunteers cooperated with the owners of shops located on Mount Fuji to switch old toilets over to the newer, cleaner versions.

Thanks to this concerted effort, the garbage and waste situation gradually began to improve. The government also helped by providing subsidies to support the shop owners and by publicizing the cleanup drive. Climbers have also literally cleaned up their act, to the point where there is now hardly any garbage above the fifth station.

World Heritage Status Can Be Revoked

Despite these positive changes, illegal dumping still continues on the lower sections of Mount Fuji. When the mountain is busiest, during the summer, climbers’ attitudes often leave a lot to be desired as well. And now that the mountain is a World Heritage site the number of climbers is set to increase, raising the specter of more difficult-to-solve problems.

Ōkawa Shin’ichi, who works for Shizuoka Prefecture’s Environmental Protection Bureau, points out that registration as a World Heritage site was never a goal in itself: “The main objective has always been to protect Mount Fuji’s natural environment. I hope that the mountain’s inscription on the World Heritage list will encourage people to change their mindset and place a greater emphasis on conservation.”

With the number of climbers likely to increase, both Yamanashi and Shizuoka Prefectures are considering the introduction of an entrance fee for Mount Fuji that could be used to fund the conservation effort. The exact amount has been the subject of much debate, but at present it seems likely that contributions will be collected on a voluntary basis, starting in the summer of 2013. The suggested donation is ¥1,000 for 10 days on the mountain. Calculations made by Professor Kuriyama Kōichi at Kyoto University’s Environmental Economics Faculty, however, suggest that ¥7,000 per person would be necessary to have any effect in restraining the number of climbers. In any case, the debate is likely to continue.

Watanabe Toyohiro, a professor at Tsuru University, who has long been active in the effort to protect the natural environment of Mount Fuji, was thrilled by the fact that the mountain became a World Heritage site—an effort he supported from an early stage. But, at the same time, he worries about the potential downside of the mountain’s increased popularity: 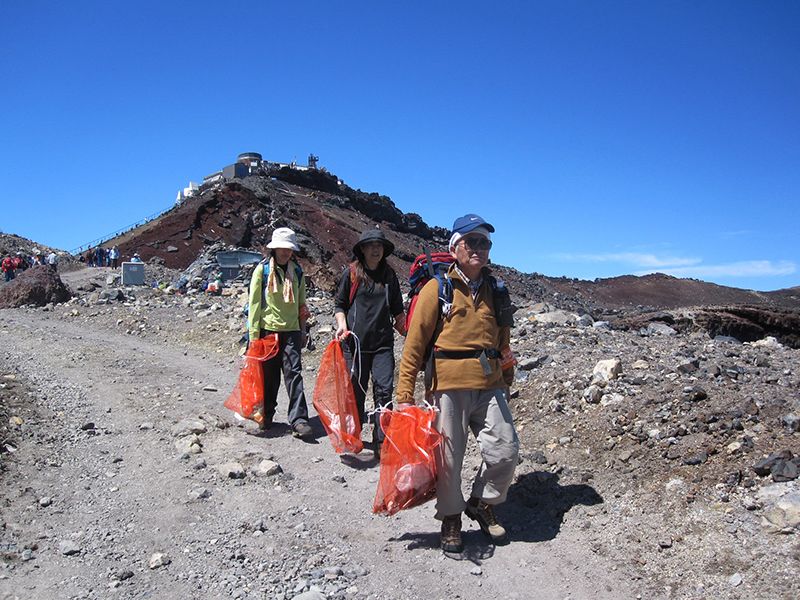 “Keeping Fuji free from garbage and waste is not the only problem that needs to be tackled; climber safety, maintaining scenery, and restraining development are just a few of the other important issues. UNESCO, in particular, criticized the lack of a centralized, comprehensive plan to preserve the natural environment of Mount Fuji. We will need to address these concerns promptly. There are cases where sites have had their World Heritage status withdrawn. Japan needs to take the necessary measures—including legislation—to ensure this does’t happen to Mount Fuji.

Even though Mount Fuji is a World Cultural Heritage—rather than a World Natural Heritage—site, there is no doubt that the cultural significance of Japan’s iconic mountain is a direct result of its natural beauty. The test for Japan in the years to come will be whether its people can continue to preserve and protect this important landmark, which is widely viewed as a national symbol.