Soaking and Seasoning: The Aromatic Pleasures of “Yuzu”

Culture Dec 21, 2016
The yuzu, or Japanese citron, is prized for its fragrance and is used to enhance a variety of cuisine, from sushi to sauces and sautés. The fruit is also a frequent addition to bathwater, where its warming properties and gentle scent soothe winter bathers.

There are few fragrances as memorable as the delicate aroma of a yuzu—a distinct citrus scent combining hints of grapefruit and tangerine. Also known as a Japanese citron, the fruit is a staple for chefs in Japan, who turn to it to enhance a countless variety of dishes. Diners may find yuzu appearing in everything from consommé to main dishes and even desserts.

The aromatic properties of yuzu are not confined to the kitchen, though. The fruit also enriches even daily indulgences like leisurely soaks in a warm bath. During the chilly winter months, citrons lend a pleasant bouquet to bathwater as they brighten the tub with their yellow-orange glow.

The prime time for yuzuyu, as a citron-steeped bath is called, is on the winter solstice, which generally falls on December 21 or 22 in the northern hemisphere. Supermarkets increase stocks of yuzu in preparation for the occasion, and visitors to hot spring resorts and public bathhouses will often find tubs filled with bobbing citron globes. Both the fruit’s juice and its bright, sunny color are traditionally thought to have warming properties, helping bathers to ward off illness and setting their minds toward the distant warmer months. As bathing in Japan is generally a nighttime activity, the soothing citrus scent and lingering warmth of the bath also act to quickly lull solstice revelers to sleep.

A Village Built on Yuzu

Half of all citron produced in Japan come from orchards in Kōchi Prefecture, an area that has become synonymous with yuzu. Honzawa Yuki, a spokesperson for the small town of Umaji on the eastern edge of the prefecture, insists that yuzu are not only for the winter solstice, but are perfect additions to any bath on a cold day. “They have a wonderful fragrance and warm you the very core,” he explains. “I enjoy a yuzuyu soak whenever I can.”

Umaji looked to yuzu production in the 1960s to boost the local economy, and over the subsequent years farmers have turned the village into a citron success story. The fruit has proved to have much more than just culinary and bathtub applications: Citron oil in the pulp soothes chapped skin, while seed oil is used in hair treatment products. Umaji produces its own original line of yuzu-based beauty products that include essential oils, creams, and lotions. 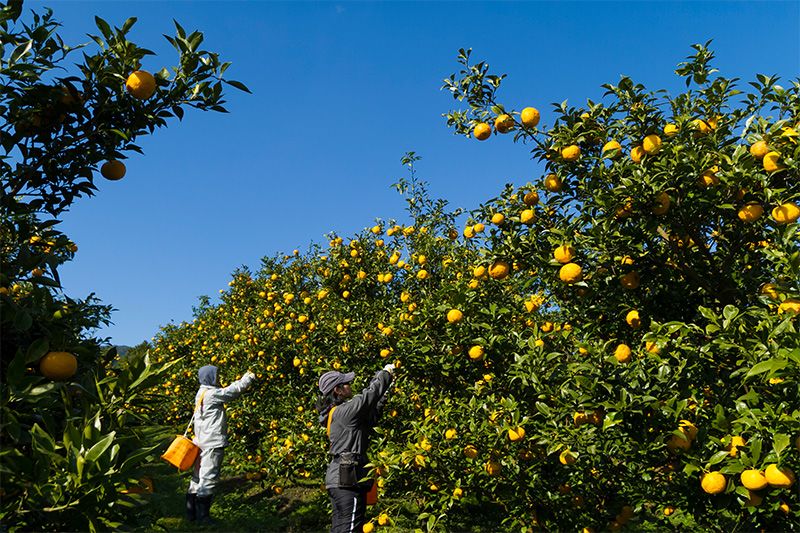 Yuzu is native to East Asia and is thought to have crossed to Japan from China. Exactly when this occurred is unclear, but historical records indicate the plant was already established by the start of the Asuka period (593–710). The custom of soaking in yuzyu on the winter solstice follows Japan’s long tradition of adding seasonal plants to bath water for enjoyment and medicinal purposes—another bathing ritual is placing shōbu (iris stalks) in water on May 5 for the tango no sekku seasonal festival. Yuzuyu dates from the Edo period (1603–1868) and may have been partially inspired by a form of Japanese wordplay called goroawase—the characters for “winter solstice” (冬至) and “hot-spring cure” (湯治) can both be read as tōji. 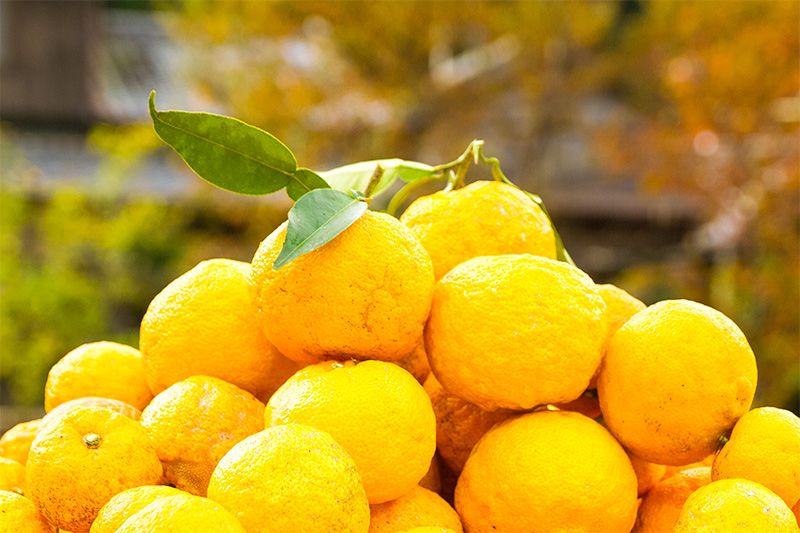 As the solstice nears, onsen resorts around Japan often get into the seasonal spirit by filling baths with yuzu. The hot springs in Umaji are no exception, and proudly use locally grown citrons. While a tub full of yuzu is a treat for bathers, some establishments may take the practical step of placing fruit in nets to prevent pulp and seeds from spreading in the water.

Yuzuyu can be easily enjoyed at home as well by using whole fruit or just adding citron juice. A popular approach is to place one or several yuzu in the bath—using a net makes cleanup easier—after scoring or cutting the peel to bring out the full aromatic properties. The fruit can generally be reused for two to three days. Bathers, particularly those with young children, should be aware, though, that yuzu has been known to irritate chapped or sensitive skin. 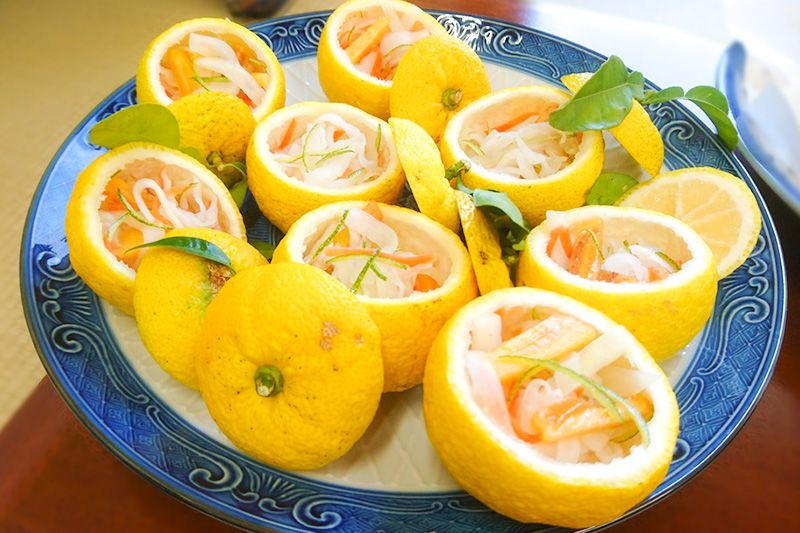 Residents of Kitagawa, another Kōchi municipality famed for its citrons, hollow out yuzu to transform the fruit into cups for enjoying sake and different traditional dishes. According to Ōtsubo Takashi, who works for the village government, any citrons left over are placed in the tub. “My two young daughters play with them like bath toys,” he says with a smile. “They have fun and don’t climb out until they are nice and warm.” 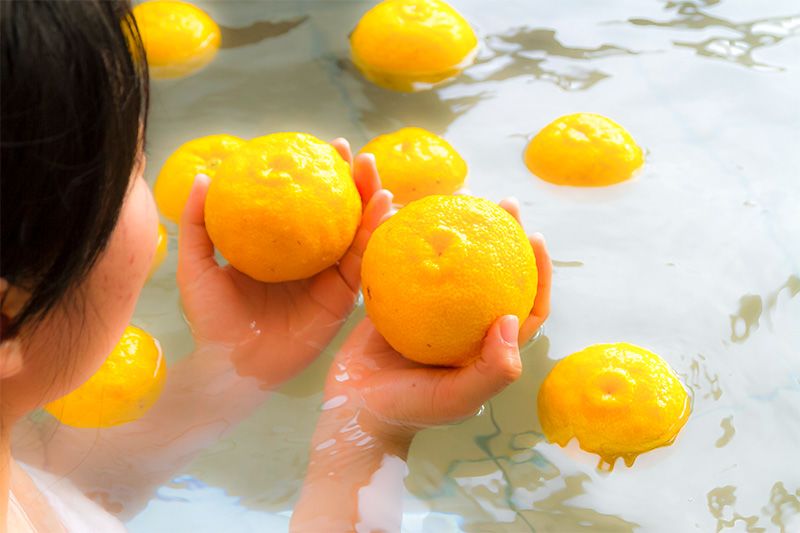 Yuzu float in a bath at the Umaji Hot Springs. (© Kusano Seiichirō)

The health benefits of yuzu are many. The compound giving the fruit its characteristic aroma, an oil in the peel known as yuzunone, has relaxing and beauty properties and is known to stimulate the skin’s pores and improve capillary circulation. The high vitamin C content of the fruit is held to increase blood flow, warm the body, and boost the immune system, while pectin improves intestinal function and even helps to expunge the body’s toxins, according to some proponents. Yuzu also has high levels of citric and malic acids that aid the body’s recovery from fatigue and heighten its natural defenses.

Considering its many uses, there may be no better companion for getting through the cold winter months than some citron seasoning during supper and a long yuzuyu soak.