Society Culture Jan 1, 2023
Shōgatsu is the most significant event on the Japanese calendar. Customs, traditional dishes, and other aspects of the holiday vary widely throughout Japan, with celebrations generally focusing on ensuring health and prosperity in the year ahead.

Ushering in the New Year

Shōgatsu, or New Year, is Japan’s most important holiday, combining traditions and customs expressing gratitude for the past year and ensuring health and prosperity in the months ahead. Many people travel to their hometowns, spending several days relaxing, catching up with friends and relatives, and enjoying seasonal cuisine. It is also a time to for people to show a more traditional side by dressing up in kimono, although this custom has begun to wane in recent years. Children enjoy games and small money gifts known as otoshidama, while adults relish the opportunity to take a break from the daily grind.

Greetings are an important aspect of shōgatsu. The first act of business after the clock strikes midnight on New Year morning is to address family members with the traditional salutation akemashite omedetō gozaimasu. This is often done while kneeling and is generally accompanied with a deep, solemn bow. People typically travel to a shrine or temple to pay their respect to local deities before retiring to the warmth of their homes to peruse nengajō (New Year greeting cards) sent by friends, coworkers, and others.

The shōgatsu season runs through January 7, or January 15 in some regions. While New Year’s Day, or ganjitsu, is the only date recognized as a national holiday, government offices as well as many businesses close their doors from December 29 to January 3. Typically, neighborhood shops and supermarkets are closed on the first day of the year, while convenience stores and many restaurants can be expected to remain open.

Households traditionally begin preparing for the arrival of toshigami (New Year gods) prior to ōmisoka, the last day of the year, by cleaning homes, preparing holiday dishes, and setting out seasonal decorations like kadomatsu (gateway pines), shimekazari (decorative rope), and kagami mochi (rounded rice cakes). Custom dictates that arrangements should be completed by New Year’s Eve—except for decorations, which must be set out at least two days in advance—to ensure that families make a clean break from the previous 12 months and spend shōgatsu focused on the year ahead.

Paying homage at a shrine or temple to pray for good luck is one of the most important customs Japanese observe during the first three days of shōgatsu. Many prefer to conduct hatsumōde at a local sanctuary, while others travel to major places of worship, such as Meiji Shrine in Tokyo or Kawasaki Daishi in Kanagawa Prefecture. Praying typically involves first providing an offering, or saisen. Worshipers toss coins into saisen bako (offertory boxes). Shrines and temples seeing heavy traffic over the New Year holiday generally establish temporary collection spaces to accommodate large numbers of visitors. After offering up a prayer, patrons move along to draw omikuji (paper fortunes), write wishes on ema (votive tablets), or purchase omamori (protective charms). 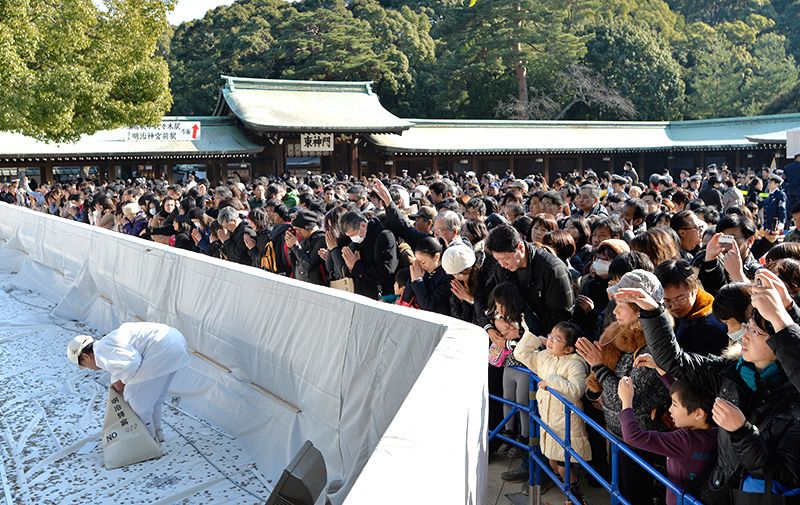 Visitors crowd around the main hall at the Meiji Shrine to offer up their first prayer of the New Year while a staff member gathers money tossed into the collection area. (© Jiji)

The New Year calendar is rife with customs providing people an auspicious restart of the routines of daily life. Many revelers visit the Imperial Palace on January 2, when it is opened to the public, to pay respect to Japan’s royal household and to hear Emperor Akihito address the crowd of well-wishers. Also on January 2, Japanese calligraphy aficionados dip their brushes to write the first characters of the year, a tradition known as kakizome. Practitioners of Japanese martial arts such as kyūdō, kendō, and karate ceremoniously observe the start of training, or hatsugeiko. One of the most popular traditions for the sleep-deprived denizens of Japan is the first dream of the year, or hatsuyume, with certain images—Mount Fuji, hawks, and eggplants being particularly propitious—giving insight into the tone of the year ahead.

Older Japanese often lament the loss of more traditional, quieter shōgatsu, when stores remained shuttered during the holiday and people stayed home. Shopping, however, has become an integral aspect of the holiday. Eager crowds relish the bargains available at malls, department stores, and large-scale outlets, which are typically open for hatsuuri (first day of business) on the first or second day of the year.

A seasonal consumer tradition are fukubukuro, so-called “fortune bags” filled with an array of different merchandise and sold for a set price. Shoppers cannot check the content of the sealed packages, adding excitement to the purchase, but no matter what the bags contain, the general belief is that the consumer is getting a bargain. 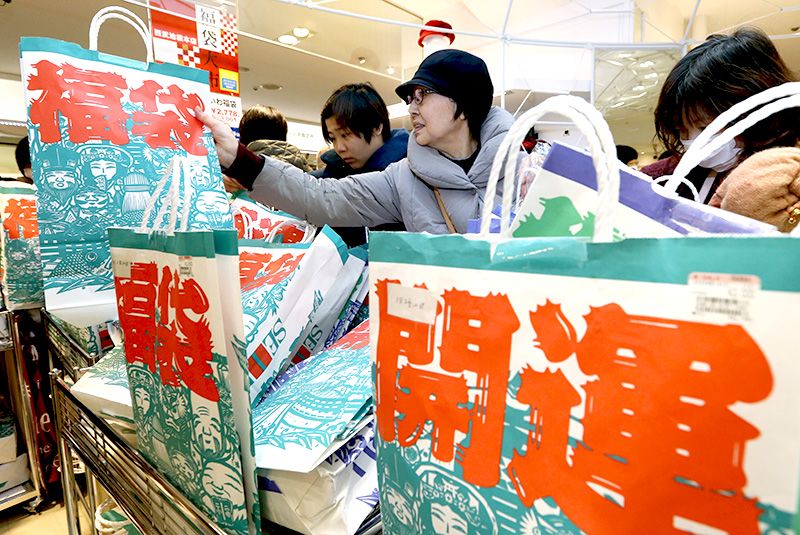 New Year mealtime centers around traditional osechi ryōri, an array of dishes with auspicious associations of longevity, prosperity, and health. Customarily presented in layered lacquer boxes, osechi cuisine is generally prepared in the period leading up to ōmisoka and gradually consumed over the first three days of New Year, a time when people typically take a break from kitchen duties.

Creating a New Year spread requires considerable time and effort. Many households today leave the chore to the experts and order osechi ryōri sets, often featuring recipes by famous chefs, from department stores or online vendors. Selections are normally available starting in early October, with some services offering custom packages along with traditional sets. One trend illustrative of Japan’s demographic woes are osechi packages designed to serve one or two diners.

Supermarkets regularly offer individual dishes for people looking to round out their feast, as well as those wanting to stock up on favorite items. While osechi ryōri traditionally features Japanese fare, recipes based on Western, Chinese, Korean, and other types of cuisine are gaining in popularity. 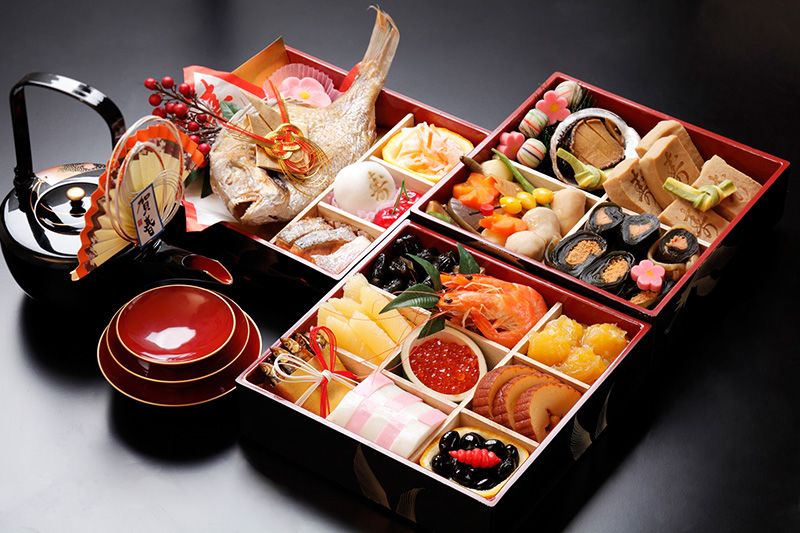 No New Year table would be complete without zōni, a traditional soup featuring mochi (rice cake) and vegetables. Ingredients vary widely throughout the country, with each region and household boasting a favored flavoring and preparation technique. 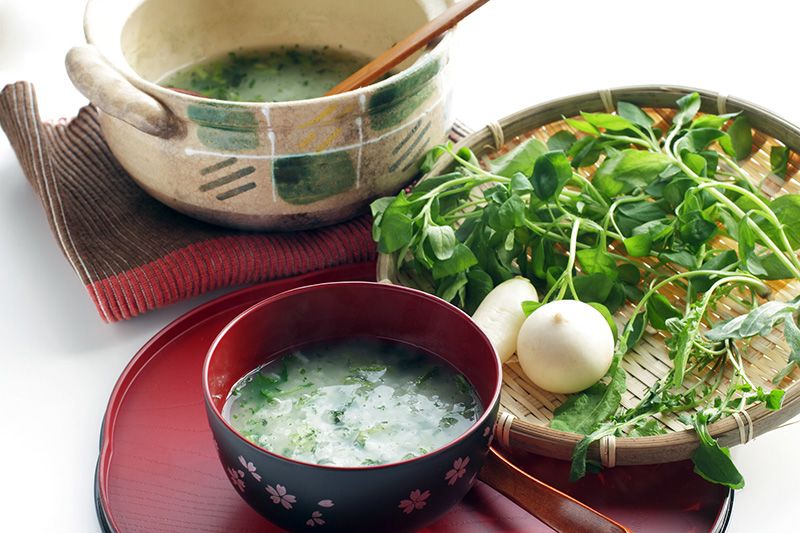 The New Year season provides merrymakers ample opportunities to overindulge in food and spirits, with midriffs frequently gaining a few centimeters over the holiday in what is known as shōgatsu-butori. As New Year feasting comes to an end, however, revelers give tired tummies a needed break with a bowl of nanagusa-gayu (seven-herb rice porridge), traditionally served on January 7. The dish incorporates medicinal herbs such as nazuna (shepherd’s purse), gogyō (cudweed), and hotokenoza (henbit), nourishing bodies and warding off illness during the cold winter months. Packages of nanagusa are generally available at supermarkets leading up to January 7.

Modern society is gradually reshaping the traditions of shōgatsu. Even as customs change, however, the holiday remains a celebration for reconnecting with friends and family and ensuring a safe and fruitful year ahead.