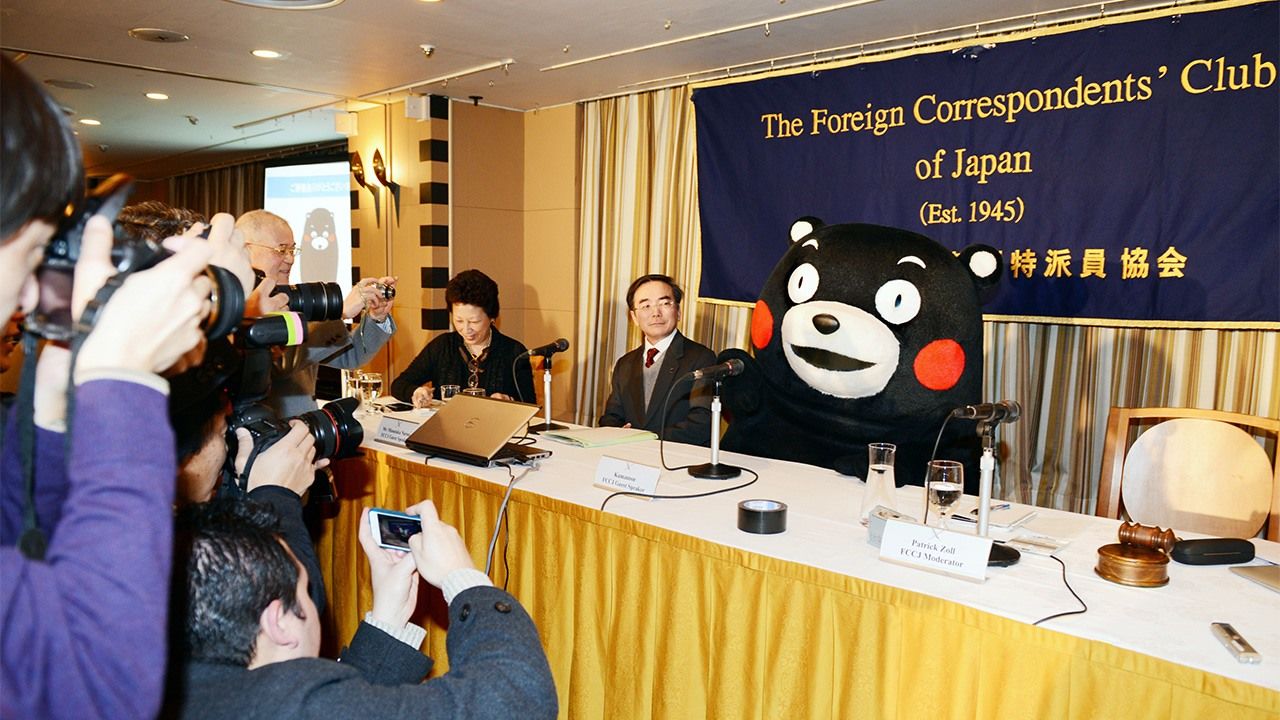 Politics Culture Sep 28, 2021
Kumamon, a wide-eyed and red-cheeked bear representing Kumamoto Prefecture, is the gold standard of yuru kyara, Japan’s pervasive promotional mascots. Since debuting in 2011, the character has won hearts in Japan and abroad, bringing in billions of yen in sales of Kumamon-related goods in the process. A former employee of the Kumamoto prefectural government explains how the regional mascot become famous at home and overseas.

Kumamoto brings to mind a myriad of images. The largely rural prefecture in central Kyūshū is home to majestic Kumamoto Castle, its iconic black walls, stone fortifications, and ornate rooftiles recently restored to full splendor following a string of devastating earthquakes in 2016. To epicureans the name is synonymous with succulent Kumamoto oysters, a breed originating in the prefecture that is now featured on menus from New York to Tokyo.

Then there is Kumamon, a bipedal bear with black fur, red cheeks, and a glassy stare who travels throughout Japan and further afield promoting the prefecture.

Kumamon is one of hundreds of PR mascots, known colloquially as yuru kyara, who populate Japan. But the smiling, wide-eyed character enjoys fame and fortune of a scale that places him heads and shoulders above his colleagues. His popularity extends beyond Kumamoto and the rest of Japan to places like South Korea, China, and even as far away as Brazil. He rubs elbows with dignitaries, headlines events that draw droves of energetic fans, and charms the media with his antics. Perhaps the most telling record of his appeal is the sales of Kumamon-related goods, which have topped ¥989 billion over the last decade, a figure that other yuru kyara can only dream about. 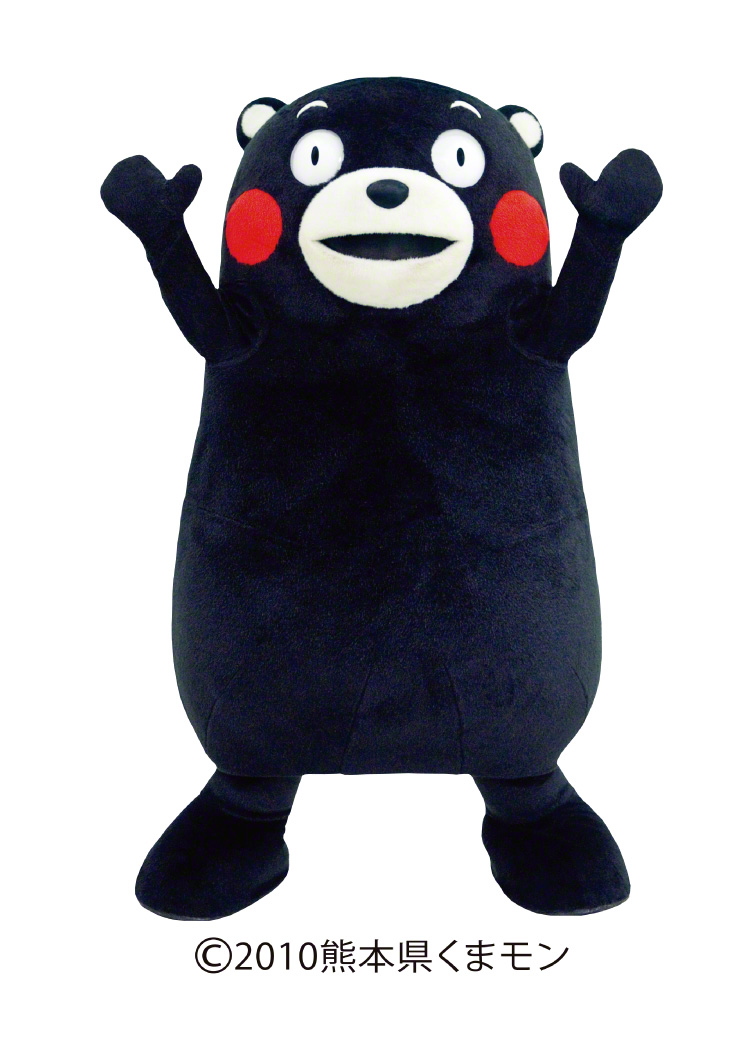 Kumamon debuted some 10 years ago at a time when yuru kyara were popping up like weeds around Japan. At first indistinguishable from the wide assortment of other characters vying for public attention—there are mascots promoting nearly everything imaginable—he quickly distinguished himself from the melee with his expressive gestures and heartwarming character.

There is a hint of the “Magic Kingdom” in his body language and features, which has helped his appeal. Unlike heavily managed franchise characters, though, he is decidedly unfinicky when it comes to his PR duties and is known to show up in surprising places. He has visited more than 20 countries to date, appearing at events around Asia as well as the Japan Expo in Paris and the Honolulu Festival. He has also schmoozed with the likes of US Ambassador to Japan Caroline Kennedy, French Ambassador Laurent Pic, and Crown Prince Frederik of Denmark.

So who is Kumamon, and how did a regional character created to promote local products wind up the focus of global adoration? 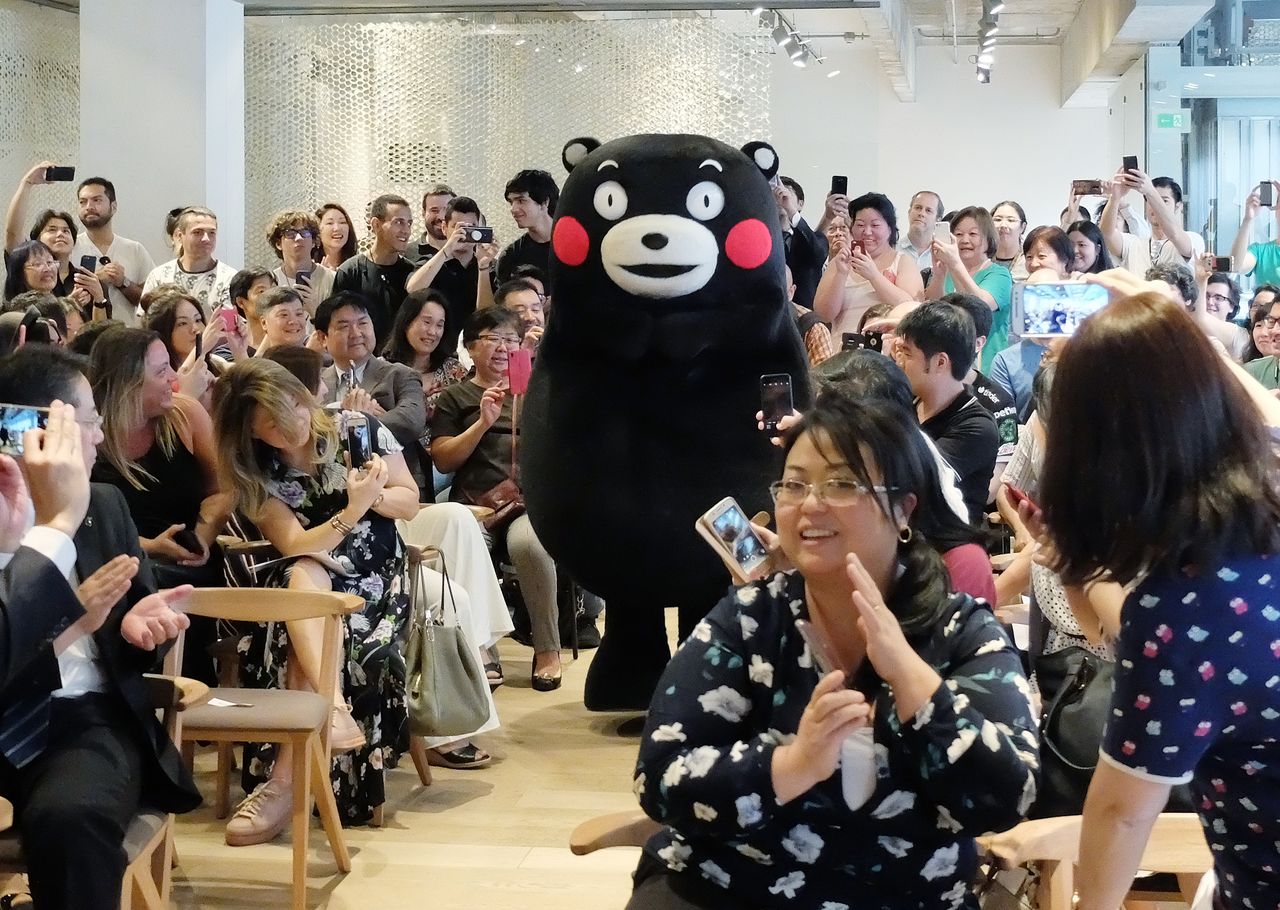 Kumamon makes his South American debut at an event at the Japan House in Sāo Paulo, Brazil, in November 2018. (© Jiji)

The impetus behind Kumamon was the opening of the northern section of the Kyūshū Shinkansen in March 2011. The southern terminus of Japan’s high-speed train network had for 36 long years been far-off Hakata Station in Fukuoka Prefecture, but with the start of services, Kumamoto at long last had a direct rail connection to major cities like Osaka and Tokyo. It created a buzz of excitement among authorities and residents, who recognized the obvious opportunities for business and tourism.

Officials initially chose to focus their PR efforts on Osaka, the closest of Japan’s two largest metropolitan centers. Starting from scratch, a team came up with a raft of promotional ideas, then sifted through candidates and refined hopeful concepts in search of a winner. They eventually settled upon the “Kumamoto Surprise” campaign, which took a holistic rather than targeted approach by leveraging the inherent appeal of Kumamoto—its culture, people, nature, products, and cuisine—to woo tourists. The aim was to rekindle a sense of pride among locals in the distinct offerings of their hometowns and to use this to promote the richness of the prefecture. Kumamon was an unexpected outcome of the project; there was little inclination at first that the impish character would come to take the central role he has.

Kumamon is the brainchild of designer Mizuno Manabu. Writer and producer Koyama Kundō, who oversaw the creative aspects of the project, initially turned to Mizuno to come up with the logo mark for the campaign. Mizuno, of his own volition, ran with the idea, surpassing our modest expectations. He sidestepped the notion of creating a mere emblem and instead set to work crafting a character that would captivate people, drawing them in—much as pandas are the stars of a zoo, Kumamon is the celebrity persona of Kumamoto Surprise. The campaign owes the lion’s share of its success to Mizuno’s ingenuity and far-reaching vision. 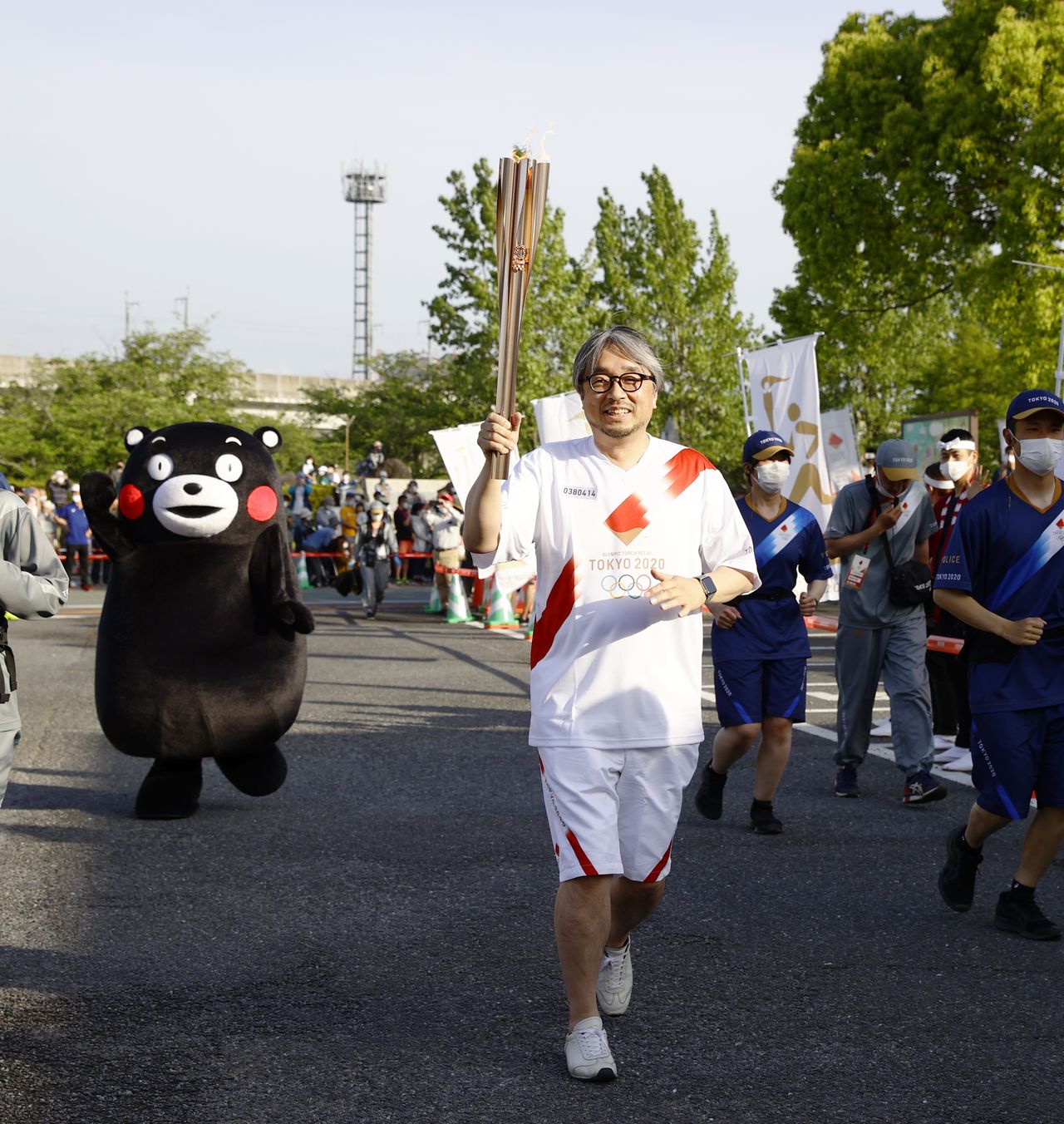 The project’s creative lead Koyama Kundō, with Kumamon following close behind, carries the Olympic flame through Uto in Kumamoto Prefecture on May 5, 2021, during a leg of the Tokyo 2020 torch relay. (© Jiji)

Yuru kyara typically have limited reach and remain close to home, mostly appearing at local events and ceremonies. Kumamoto broke from this approach by declaring Kumamon a “traveling mascot.” In an unconventional strategy, it aimed to first make a name for the character, and from there to use its popularity to promote the prefecture. Kumamon started surfacing regularly at events around Osaka, handing out personal business cards like a dutiful salesman, and also began building a presence on social media platforms like Twitter, which at the time was starting to grow in Japan.

The approach quickly paid off, with Kumamon’s fame spreading. Even though he is now a mascot superstar, his role and the goal of the campaign—to promote Kumamoto and improve the lives of residents—remains unchanged. The prefecture has copyrighted the character, but does not charge for the use of Kumamon’s image. This policy was initially adopted to enable smaller companies in the prefecture to join the campaign, and was continued when larger corporations started to take interest.

Today, Kumamon’s beaming visage is found on a wide array of products around Japan and even overseas. Global brands that have teamed up with the bear include the French crystal manufacturer Baccarat, the German camera house Leica, BMW’s Mini, and, naturally, the German teddy bear maker Steiff. Such collaborations have garnered considerable media attention, raising the profile of Kumamon, and subsequently boosting interest in Kumamoto. 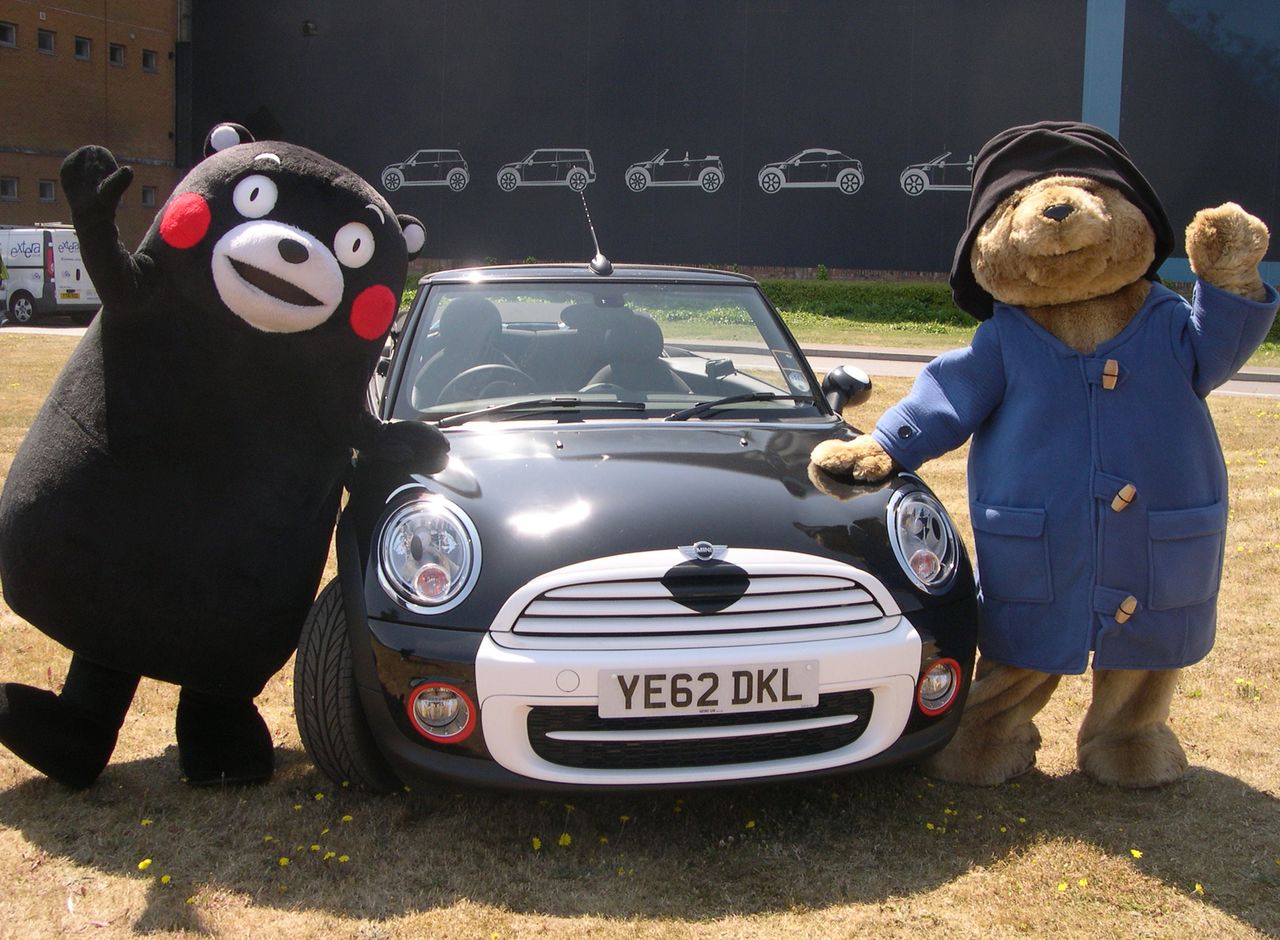 Kumamoto could have made a fortune if it had demanded royalties on the nearly ¥1 trillion in sales of Kumamon-related goods generated over the last decade, but this would not have been in the spirit of the project. One of the few conditions enforced on firms and others wishing for Kumamon to appear on packaging or advertising of food items is that the goods must be made in Kumamoto or contain a certain amount of ingredients sourced from the prefecture.

Kumamon will also appear for free, save for transportation costs, on television programs and at public events so long as presenters give a plug to his native prefecture. Anyone wanting him to go in front of the camera or an audience just as a cuddly bear without involving Kumamoto, though, is out of luck. 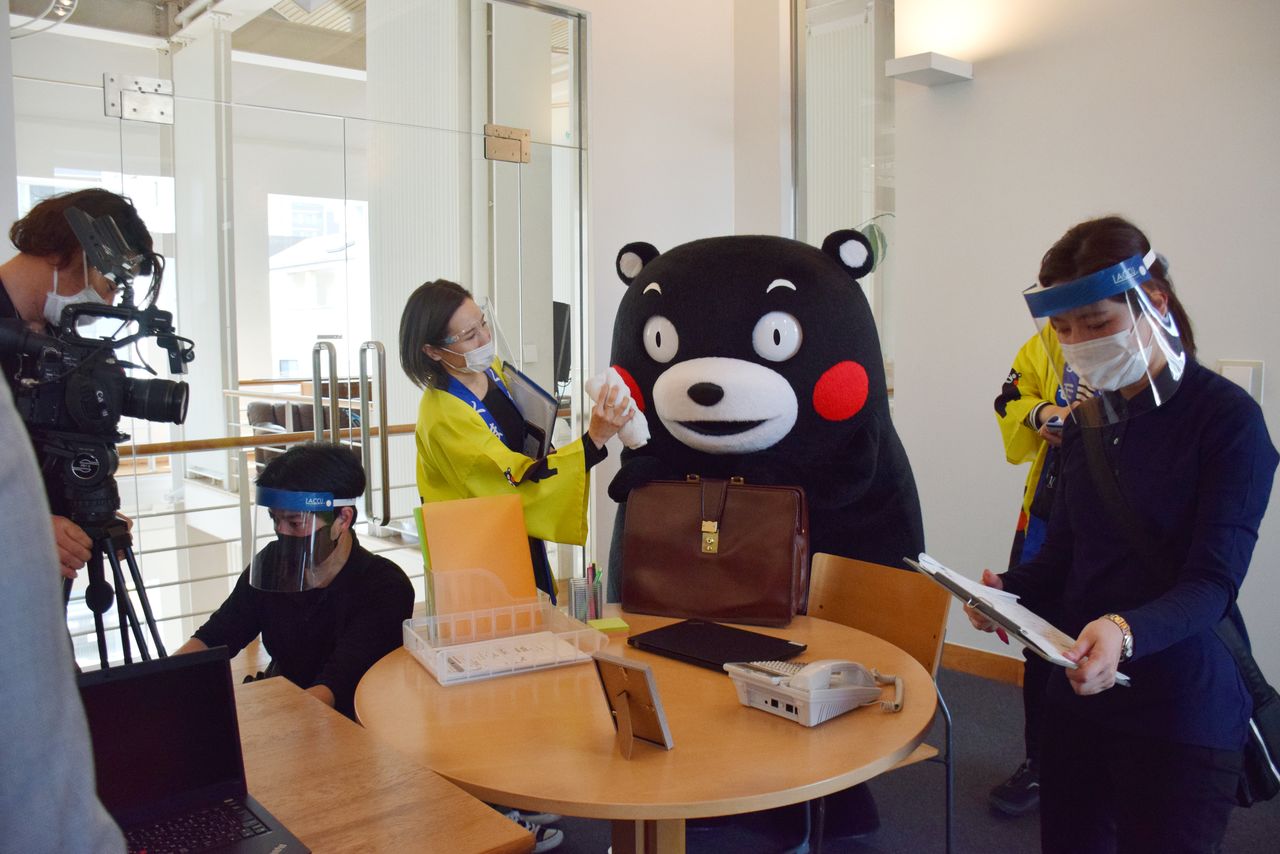 Kumamon preps for an appearance on a local television program in February 2021. (© Jiji) 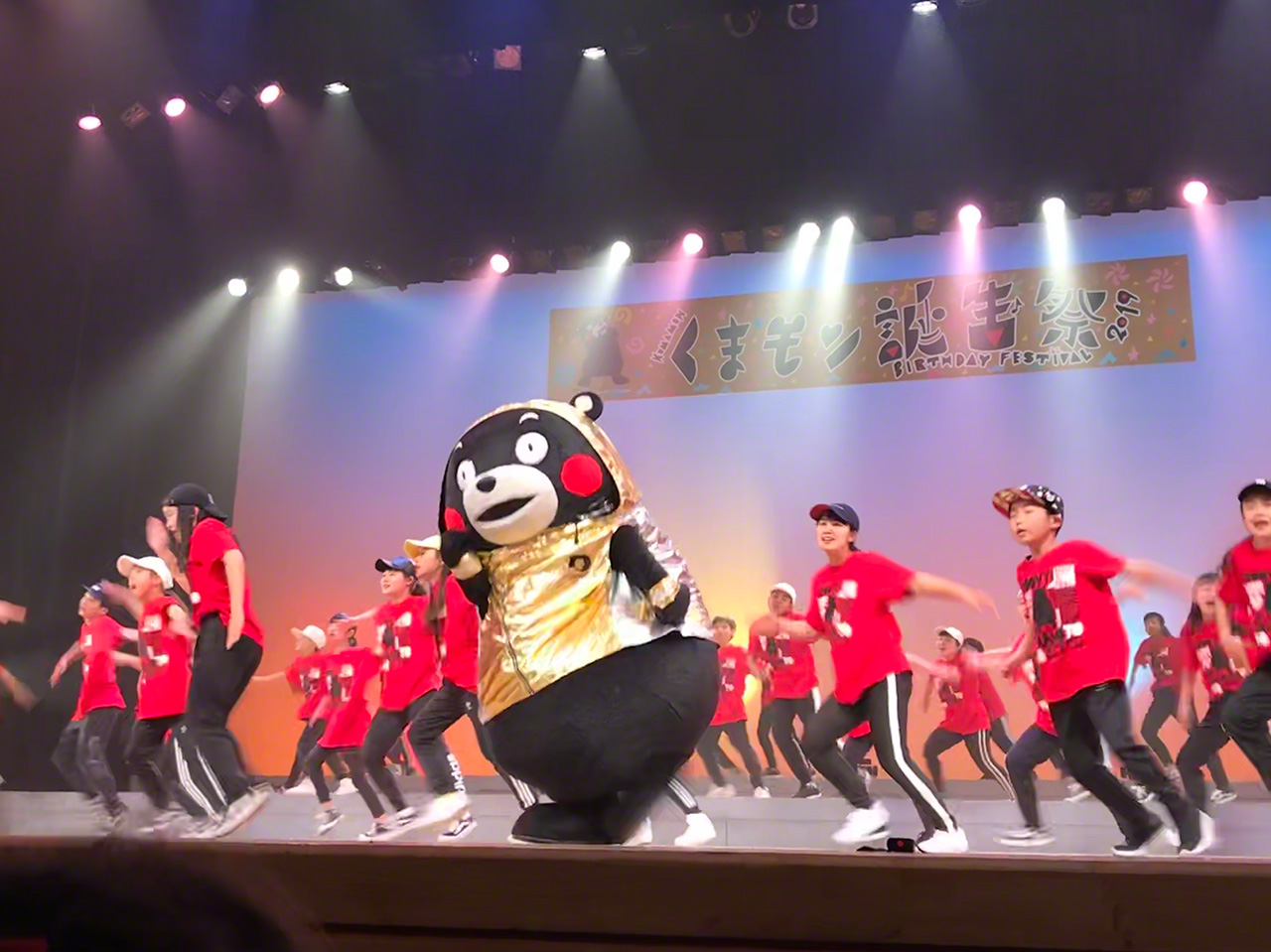 Dancers join Kumamon at a birthday event for the mascot held in March 2019 at the Kumamoto Civic Auditorium. (Courtesy Kumamoto Prefecture)

However, the prefecture has had to make one exception regarding Kumamon’s appearances and royalties. Starting several years back, Kumamoto has charged to use his image on products sold overseas. As Japan’s yuru kyara have garnered attention abroad, it has generated a steady stream of knock-off items, particularly in Asia. Monitoring and cracking down on imitation goods is an expensive endeavor, requiring the prefecture to employ staff in different countries. Since the issue is mainly focused overseas in places like China, Hong Kong, and Taiwan, charging foreign firms to use the bear’s image was an unavoidable step toward keeping fake Kumamons out of circulation.

A Bear for the Children

Kumamon is loved by people of all ages, but he has a special connection with children. Afterall, he is hardly more than a mischievous cub himself. Children in both developing and developed nations face a mountain of challenges, including lack of access to education, malnutrition, human trafficking, and forced labor. There is a growing need for Kumamon to expand his mission and use his influence to assist the disadvantaged youths of the world. 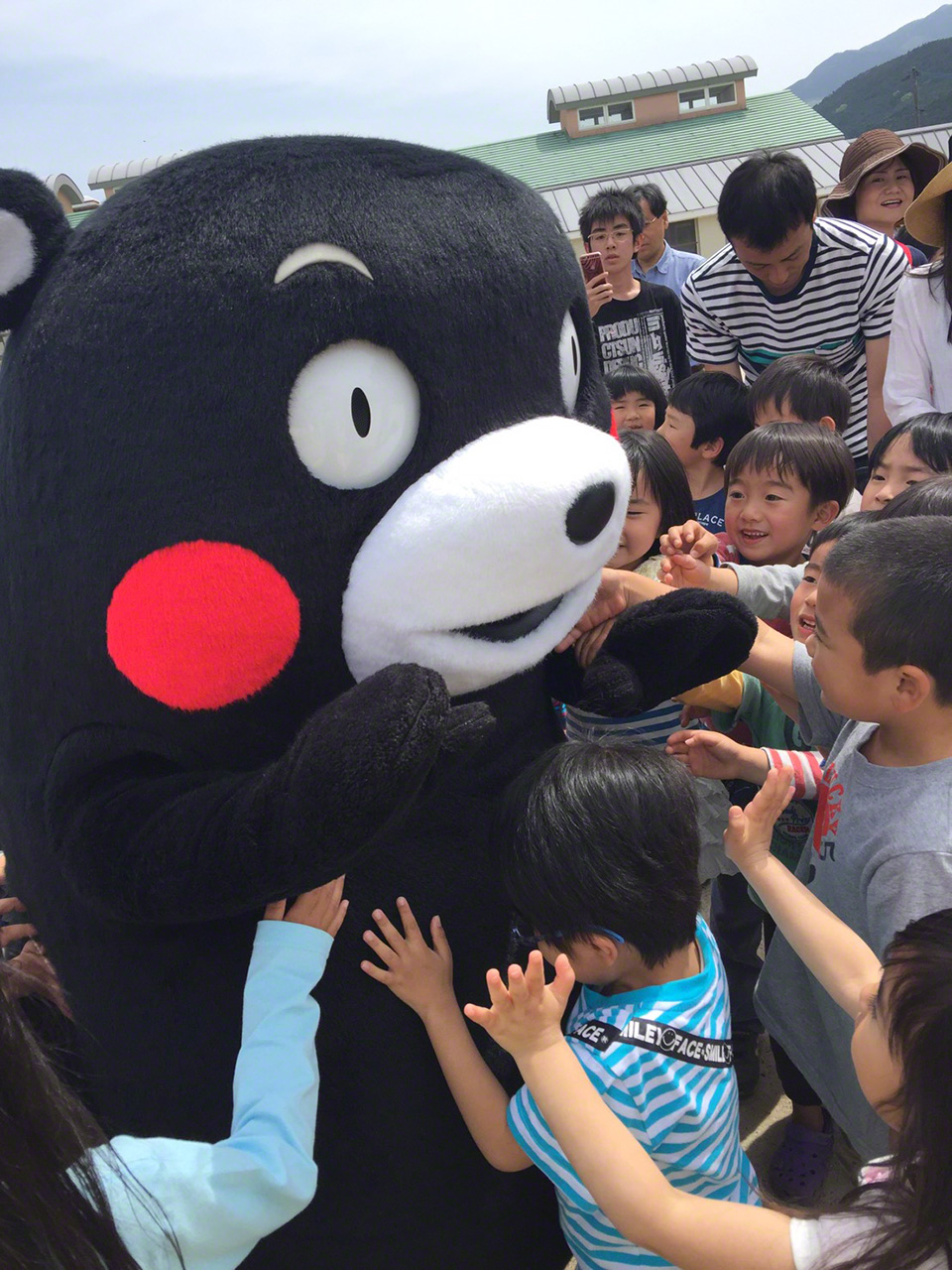 Kumamon visits children at a nursery school in Nishihara in May 2016 following a series of earthquakes in Kumamoto that heavily affected the area. (Courtesy Kumamoto Prefecture)

It is my hope that the companies and organizations offering Kumamon-branded goods will donate a portion of their proceeds toward a fund—call it the “Kumamon Fund”—set up to support local NPOs dedicated to improving the safety and wellbeing of children, such as those providing educational opportunities and defending human rights. Helping advance the United Nation’s Sustainable Development Goals would also ensure a better life for young people, and I know nothing would make Kumamoto residents happier and prouder than to have Kumamon leading the charge. In my mind, this would be the greatest legacy of the Kumamoto Surprise campaign.

(Originally published in Japanese. Banner photo: Kumamon making an appearance at the Foreign Correspondents’ Club in Tokyo in February 2014. © Jiji.)