A Year of Japanese Searches: The Top Internet Keywords of 2017

Society Dec 29, 2017
The top Japanese search terms for 2017 as announced by Google and Yahoo. All the personalities, products, and news stories that got Japan’s web-surfers looking for more information.

Google Keywords of the Year

On December 11, Google announced its 2017 Year in Search, giving global and regional rankings for search engine users’ top keywords. In Japan, the trending listing was topped by newsreader Kobayashi Mao, who died of cancer this year after documenting her battle with the disease and life with her family in a much-read blog.

In second place was North Korea; continual ballistic and nuclear missile testing has kept the country in Japanese thoughts. Video game Dragon Quest XI finished third as excitement surrounded its July 2017 release, while the term “typhoon” came in fourth as many parts of the country were affected by heavy weather. Breakthrough comedian Blouson Chiemi appeared in tenth position.

Global users searching for Japan-related topics most often paired it with North Korea, reflecting the impact of missiles landing around Japan on world news. This was followed in the ranking by “Trump in Japan,” as Internet users looked for information on US President Donald Trump’s November visit.

The list of search terms used with to wa (“What is,” a term often added to a search string to find a definition) was headed by the word sontaku, meaning “to follow unspoken wishes,” which came to prominence in scandals involving Prime Minister Abe Shinzō. In second place was Puremiamu Furaidē (Premium Friday), a government-backed campaign to boost spending by encouraging companies to finish early on the last Friday of each month.

In the rankings by prefecture, Chiba citizens were eager to find out about a proposed geologic age named after the administrative region, so “Chibanian” was the top local search term. In November, a committee of the International Union of Geological Sciences unofficially chose the name for the period from 770,000 years to 126,000 years ago in the mid-Pleistocene era, based on strata evidence of geomagnetic reversal found in the city of Ichihara in Chiba. If it receives official status, Chibanian will be the first geologic era named after a Japanese place name.

Blouson Chiemi took the grand prize. Her catchphrase of “3.5 billion” men on the planet became one of the words of the year, and searches for the comedian, with her distinctive fashion and makeup, surged in 2017.

Sontaku was the buzzword of the year, adding another award to the Jiyū Kokumin Sha Word of the Year prize and dictionary publisher Sanseidō’s choice. 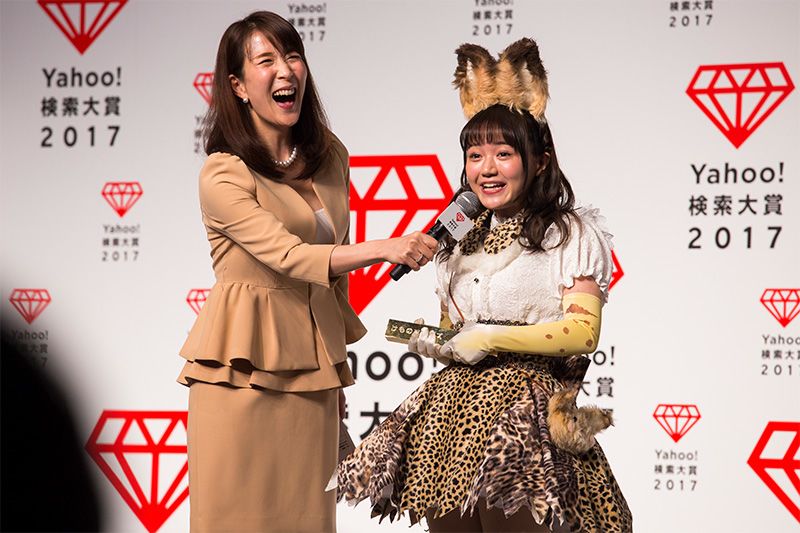 Kemono Friends voice actress Ozaki Yuka (right) speaks in the voice of Serval, her character, as she accepts the award for her anime title’s win.

The winner of the author prize, Kazuo Ishiguro, sent a video message to the awards ceremony. “Growing up in the West, I was always taught by my parents to look at the world through both Japanese eyes and British eyes,” he said, crediting this as making the greatest contribution to his development as a writer. He stressed the importance of trying to understand people in different countries and cultures rather than looking inward. 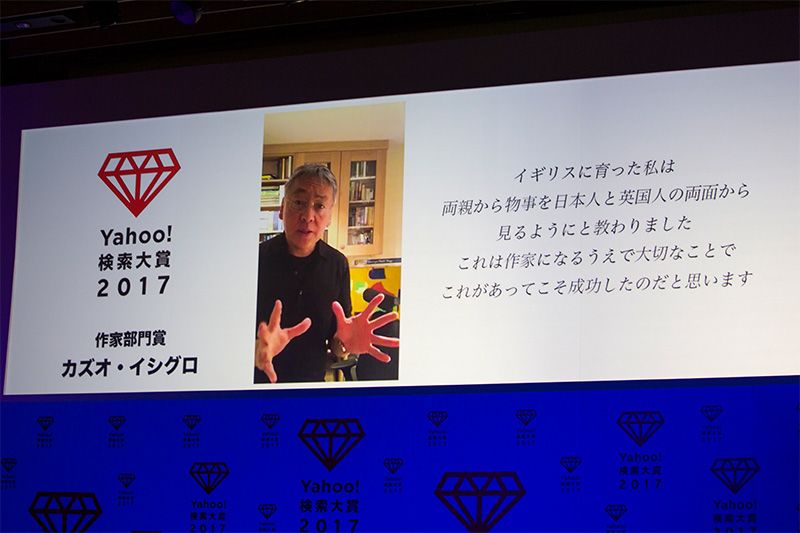 Kazuo Ishiguro responds to his award in a video message.

Among the trending keywords by prefecture were Tochigi Brex, Ryūkyū Golden Kings (Okinawa), and Shimane Susanoo Magic, teams in the pro basketball B. League that was launched in September 2016. Saitama citizens also searched for local sporting heroes Hanasaki Tokuharu High School, the first winners of the summer National High School Baseball Championship to hail from the prefecture. 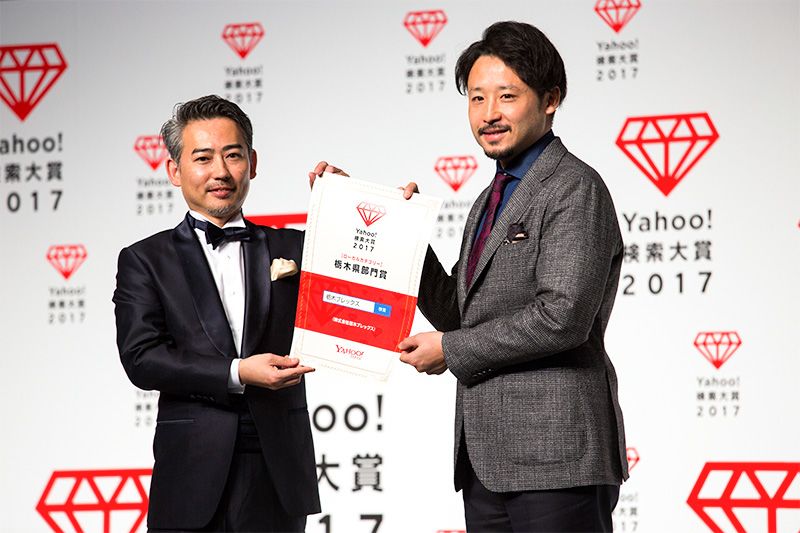 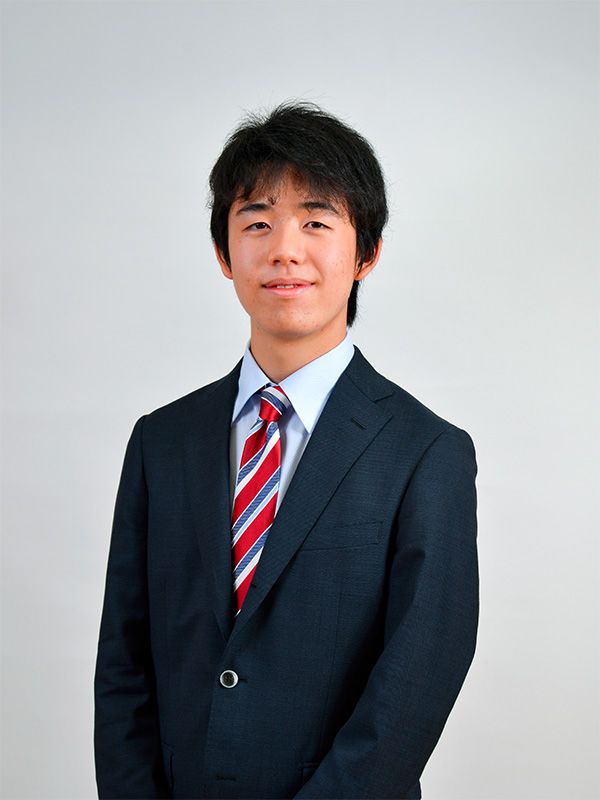 Fujii Sōta became the youngest ever professional shogi player in 2016 at the age of 14 years and 2 months. Searches surged when he equaled and then beat the record for straight wins since his pro debut, stacking up 29 victories before his first defeat. 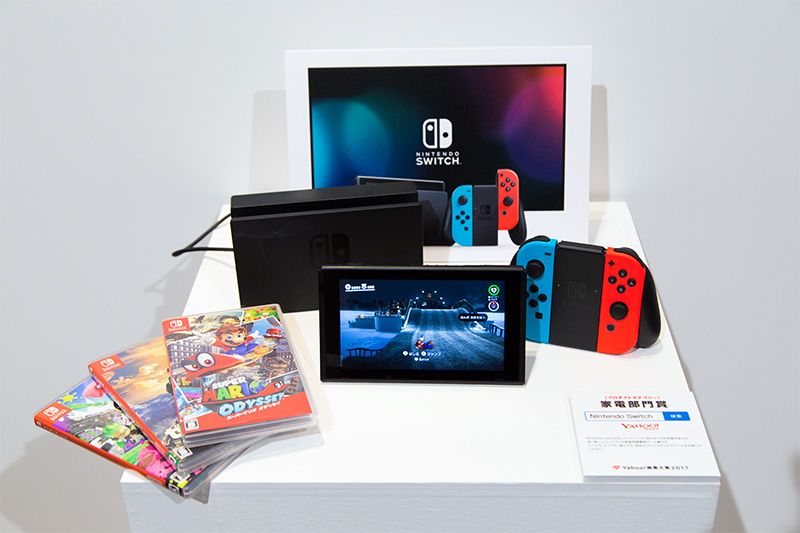 Nintendo’s hybrid Switch console went on sale in March. Many outlets sold out so quickly that some would-be customers found the hit product hard to get their hands on.

(Originally published in Japanese on December 25, 2017. Banner photo: Blouson Chiemi, at podium, lines up with other Yahoo prizewinners at a Tokyo ceremony on December 6, 2017.)