Universities Struggle to Cope with Shrinking Population and Globalization

Science Technology Society Mar 16, 2015
Winter is the season of university entrance exams in Japan. It is a time of trepidation not only for the students but also for the universities, which today face the problem of population decline. Their survival hinges on their ability to attract students from a shrinking pool of young people while also meeting the challenges of globalization as institutions of higher education and research.

The number of 18-year-olds in the Japanese population peaked at 2.49 million in 1966 as the post–World War II baby-boom generation reached that age. The numbers picked up in the 1980s, but after reaching a figure of 2.05 million in 1992, when many of the baby boomers’ children finished high school, Japan’s population of 18-year-olds turned down again, shrinking by almost half to 1.18 million as of 2014. Although the figure has remained basically steady over the last several years, the National Institute of Population and Social Security Research predicts that this cohort will begin shrinking again from around 2018, falling below the 1 million mark to roughly 990,000 in 2031.

The rate of enrollment in higher education, meanwhile, has consistently risen over recent decades. In the 1970s and 1980s, about 36%–37% of high school graduates went on to college (university or junior college). The rate rose to 45.2% in 1995 and 51.5% in 2005. As of 2014 the figure came to 56.7%, and if we include other institutions of higher education, such as specialized training colleges (vocational schools), the enrollment rate goes up to 80.0%. So more than half of Japanese young people advance to higher education today. In fact, by around 2000 Japan had already entered an age of “universal” access to higher education—meaning that everyone can go to college as long as they are not picky about the school or faculty. 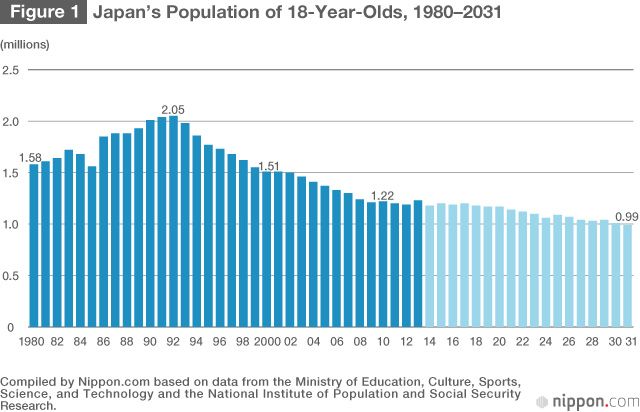 If the enrollment rate peaks out even as the numbers of young people continue to drop, there is little hope of increasing the number of college goers. College students in Japan are projected to decrease from 650,000 in 2018 to 480,000 in 2031. Roughly 40% of private universities had fewer students than their capacities as of 2014, and from 2018 onward, national and public universities located in regional areas could also face financial difficulties. Universities are now working on ways to cope with this “2018 problem.” 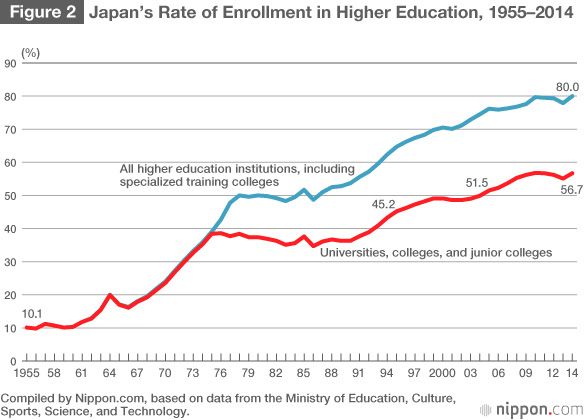 Deregulation Leads to Upsurge of Universities

For decades, Japanese universities had many more applicants than openings, and students had to go through the ordeal of the “exam war”—years of intensive study to prepare for rigorous entrance examinations. But now the tables have turned, and the universities are competing with one another to woo applicants.

Many private universities have taken to holding open campuses, in which they provide tours and information for prospective students, and quite a number are offering what are called “AO [admissions office] entrance exams” as an alternative admission track; unlike the usual entrance exams, which measure applicants by their academic achievements, the AO exam process focuses on such elements as interviews and students’ essays on their reasons for choosing the school. Universities are being pressed to make sweeping changes, not only in how they solicit and select applicants and guide and educate enrolled students, but also in the organization of their educational, research, and administrative branches and their financial and operating policies. 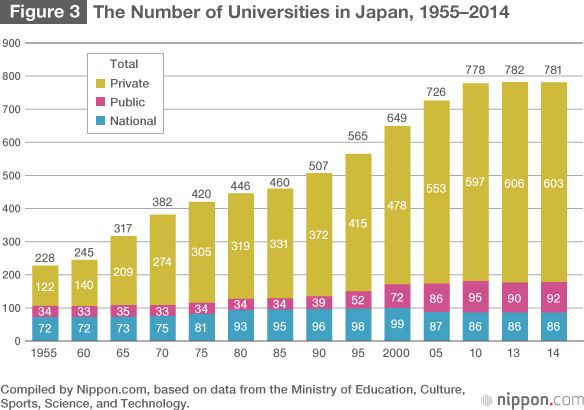 The shakeout of Japanese universities has already begun. In November 2014 St. Thomas University, a Catholic institution in Amagasaki, Hyōgo Prefecture, announced that it would be closing down in March 2015. The school stopped accepting applications in 2010, and no students are currently enrolled. And Tokyo Jogakkan College in Machida, Tokyo, has decided to close its doors in March 2016, when the last of its students will be graduating. Drawing on its brand value as a prestigious all-girls school founded in 1888, Tokyo Jogakkan ventured into higher education and launched a four-year college. But recruiting students in the universal access era proved difficult, and the college was unable to fill its openings. Other universities and colleges are also facing similar fates.

The shrinking of the youth population has hit college preparatory institutions as well. In a sign of the times, major cram school operator Yoyogi Seminar announced in fall 2014 that it was closing 20, or roughly 70%, of its schools nationwide. Yoyogi Seminar was known as one of Japan’s top three cram schools, alongside Sundai and Kawaijuku, helping many students pass rigorous entrance exams to gain admission to the school of their choice. But a growing number of students are considering factors like family finances and opting to enroll in college straight from high school rather than studying an extra year or more at a cram school in hopes of getting into their top-choice school. Also, many private universities are now admitting more students on the basis of recommendations and through nonacademic AO exams. These trends have dealt a blow to the cram school business.

Today, every applicant can enter one university or another; the door to admission is no longer the “narrow gate” it used to be. And as the pool of prospective students will be shrinking further from 2018 onward, university administrators are looking ahead with concern at expected declines in revenues from entrance exam fees and tuition.

Even the best-known private universities are not immune to these trends. Schools are bracing themselves for the crisis in different ways. Some universities are moving their suburban campuses back into the city to attract urban-oriented students and are beefing up their faculties with famous and talented teachers. Others are trying to enhance their visibility by participating in ekiden relay races and other sports events. Still others are altering existing departments and courses into more distinctive ones to better suit the times, such as by switching from the liberal arts to nursing, education, nutrition, or other practical sciences and revamping literature departments into international studies departments.

A number of universities are focusing on creating unique programs to develop the kinds of talents sought by businesses, such as by giving liberal arts majors a strong grounding in fields like information and communications technology, math, statistics, and management and by developing students’ sales and marketing abilities. Some regional universities, meanwhile, are differentiating themselves from other schools in an effort to keep young locals from leaving for the cities, such as by partnering with the local community to incorporate social service activities into the curriculum.

The declining population is not the only change that universities must cope with. They must also boost their international competitiveness to meet the challenges of globalization. No higher education system today, in Japan or anywhere, can exist in isolation from the global movement of researchers and students and the worldwide network of academic connectivity based on information and communications technology. If Japan is to survive the global economic race centered on science and technology, it is imperative that it strengthen the international competitiveness of its national universities.

Some regional universities with innovative programs have made the B list as well. Students at the public University of Aizu (Fukushima Prefecture) are required to write their theses in English, while those at Akita International University (Akita Prefecture), also public, cannot graduate without studying abroad for at least a year.

The Top Global University Project may prove to be an effective booster for the international rankings of Japan’s institutions of higher education. Domestically, however, the project could lead to a new hierarchy and greater disparities among universities. In order to survive the competition, Japanese universities must find ways to respond to the two major trends of globalization and population decline.

(Original Japanese article by Harada Kazuyoshi. Banner photo: Students await the start of the National Center Test for University Admissions at the University of Tokyo on January 17, 2015. © Jiji.)