What Japanese Search For: The Top Internet Keywords of 2016

Google on December 14 announced its 2016 Year in Search list, the search engine’s global and regional keyword rankings. Pokémon Go was the top trending term around the world, showing the overwhelming popularity of the smartphone game. It led trending and news lists in Japan and ranked third internationally when paired with “Japan” as a search term.

Keywords from sports and entertainment rounded out the top three of Japan’s trending index as searches about the August Rio Games pushed Orinpikku (Olympics) into second position and the announced disbanding of popular idol group SMAP saw the boy band rank third. Japanese cinema was also a major part of the Internet zeitgeist with breakout anime hit Kimi no na wa (Your Name) and the latest installment in the Godzilla franchise Shin Gojira (Godzilla Resurgence) ranking sixth and seventh, respectively. People Googling about a series of destructive earthquakes in Kumamoto Prefecture in April made the seismic event Japan’s fifth trending keyword and tenth for news searches internationally.

Looking at Japan-related terms globally, “Obama apologizes to Japan for Hiroshima & Nagasaki” ranked second, showing how search trends can frequently reflect popular perceptions (US President Barack Obama during his historic visit to Hiroshima in May actually did not offer an apology for America’s decision to use the atomic bomb during World War II).

As for words searched with to wa (“What is”), most of the terms were news related, including, “What is legacy,” which often came up in reference to the 2020 Tokyo Olympic and Paralympic Games. One notable exception was kitsuon to wa (What is stuttering); many people searched to learn more about the communication disorder, as the popular television drama Love Song featured a main character who stutters.

The search engine also provided regional rankings. Okizari (abandoned) topped the keyword index in Hokkaidō following an incident in May where a seven-year-old boy went missing for six days after his parents left him alone in the woods as punishment. 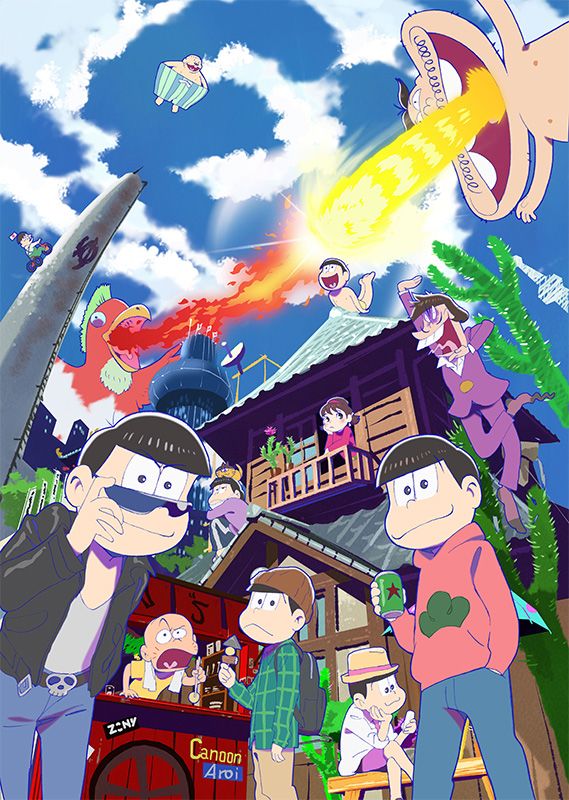 Anime and manga series Osomatsu-kun by Akatsuka Fujio portrays the lives of easy going sextuplets. Popular in the 1960s, the updated version Osomatsu-san became a hit among young women when it began airing on Japanese television in 2015. (© Akatsuka Fujio/Osomatsu-san Production Committee)

The grand prize went to Dean Fujioka, who garnered Internet attention for his movie roles in Taiwan and Hong Kong and as a star of public broadcaster NHK’s popular morning drama Asa ga kita. The anime prize went to Osomatsu-san, an update of a popular animated series that first aired in the 1960s, while the hit Kimi no na wa (Your Name) captured the award for most searched movie. Pokémon Go was the top trending game and the PlayStation VR led the way in the consumer electronics category.

PPAP performed by Pikotarō easily took Yahoo! Japan’s newly introduced prize for buzzword of the year after the video went viral shortly following its release. The search engine also began introducing trending terms by prefecture. In Tokyo the election of Koike Yuriko as governor in July was a hot topic, while the Group of Seven Summit in Ise-Shima in May garnered attention in Mie.