Culture Jun 30, 2018
The Hidden Christian Sites in the Nagasaki Region have been registered by UNESCO as a World Heritage site. This is the twenty-second Japanese entry on the prestigious list.

The Hidden Christians Who Secretly Practiced Their Faith

On June 30, 2018, the World Heritage Committee of UNESCO announced the official registration of the Hidden Christian Sites in the Nagasaki Region on its World Heritage list.

The locations include Ōura Church in Nagasaki; the remains of Hara Castle, where Christian farmers were besieged during the Shimabara Rebellion of 1637–38; and Sakitsu in Amakusa, a fishing village that was once a center for the faith. The UNESCO advisory body the International Council on Monuments and Sites commented that the sites bear testimony to the unique cultural tradition nurtured by Hidden Christians in the Nagasaki region who secretly practiced their faith despite a ban on Christianity.

In December 1993, Japan’s first World Cultural Heritage sites were registered: the Buddhist Monuments in the Hōryūji Temple area (Nara Prefecture) and Himeji-jō Castle (Hyōgo). The seventeenth such site was registered in 2017, with the recognition of the Sacred Island of Okinoshima and Associated Sites in the Munakata Region. The country’s first two World Natural Heritage sites were also recognized in December 1993: Yakushima (Kagoshima) and Shirakami-Sanchi (Aomori and Akita). These were followed by Shiretoko (Hokkaidō) and the Ogasawara Islands (Tokyo), bringing the total number of sites to four.

As of June 2018, there are 1,073 World Heritage sites in the globe (832 World Cultural sites, 206 World Natural sites, and 35 mixed properties); a total of 193 countries have signed the “World Heritage Convention.” 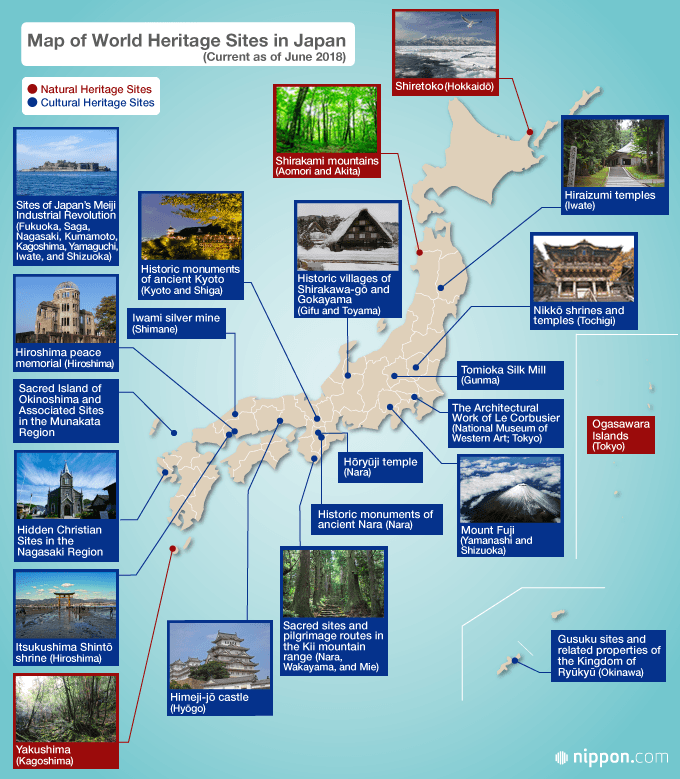 (Banner photo: The former Nokubi Church among the remains of villages on Nozaki Island in Ojika, Nagasaki Prefecture, which is part of the UNESCO World Heritage site Hidden Christian Sites in the Nagasaki Region. Photograph by Kuroiwa Masakazu.)