Politics Economy Society Dec 31, 2021
COVID-19 continued to dominate Japan’s headlines in 2021. The delayed Tokyo Olympics and Paralympics were also held, and Prime Minister Suga Yoshihide stepped down to be replaced by Kishida Fumio.

On January 8, Tokyo, Kanagawa, Saitama, and Chiba Prefectures enter their first COVID-19 state of emergency of 2021. Tokyo, in particular, remains under emergency or pre-emergency measures through much of the first three quarters of the year. Daily COVID-19 fatalities top 100 some days in January and February, and do so again in May and June.

On January 21, lawmaker Kawai Anri is sentenced to 16 months in prison, suspended for five years, for violations of the Public Offices Election Act during her 2019 House of Councillors election campaign. Her husband, former Minister of Justice Kawai Katsuyuki, is sentenced to three years in prison without suspension at the Tokyo District Court on June 18 after being found guilty of buying votes in the same campaign. Both resign their Diet positions.

The Diet enacts a bill revising laws to increase the effectiveness of Japan’s COVID-19 response. The updated laws come into force on February 13, and include measures allowing prefectural governors to impose fines of up to ¥300,000 on businesses that do not comply with orders to shorten operating hours or close during a state of emergency.

COVID-19 vaccination begins on February 17, starting with around 400,000 medical workers at hospitals across the country.

The Ministry of Internal Affairs and Communications punishes 11 officials for ethics code violations on February 24 after they were wined and dined by Suga Seigō, the eldest son of Prime Minister Suga Yoshihide, who works for a media production company.

On March 11, Japan marks the tenth anniversary of the Great East Japan Earthquake. An official ceremony is held at the National Theater in Tokyo for the first time in two years, after the 2020 event was canceled due to the spread of COVID-19. This is the last official ceremony for the disaster to be organized by the national government. 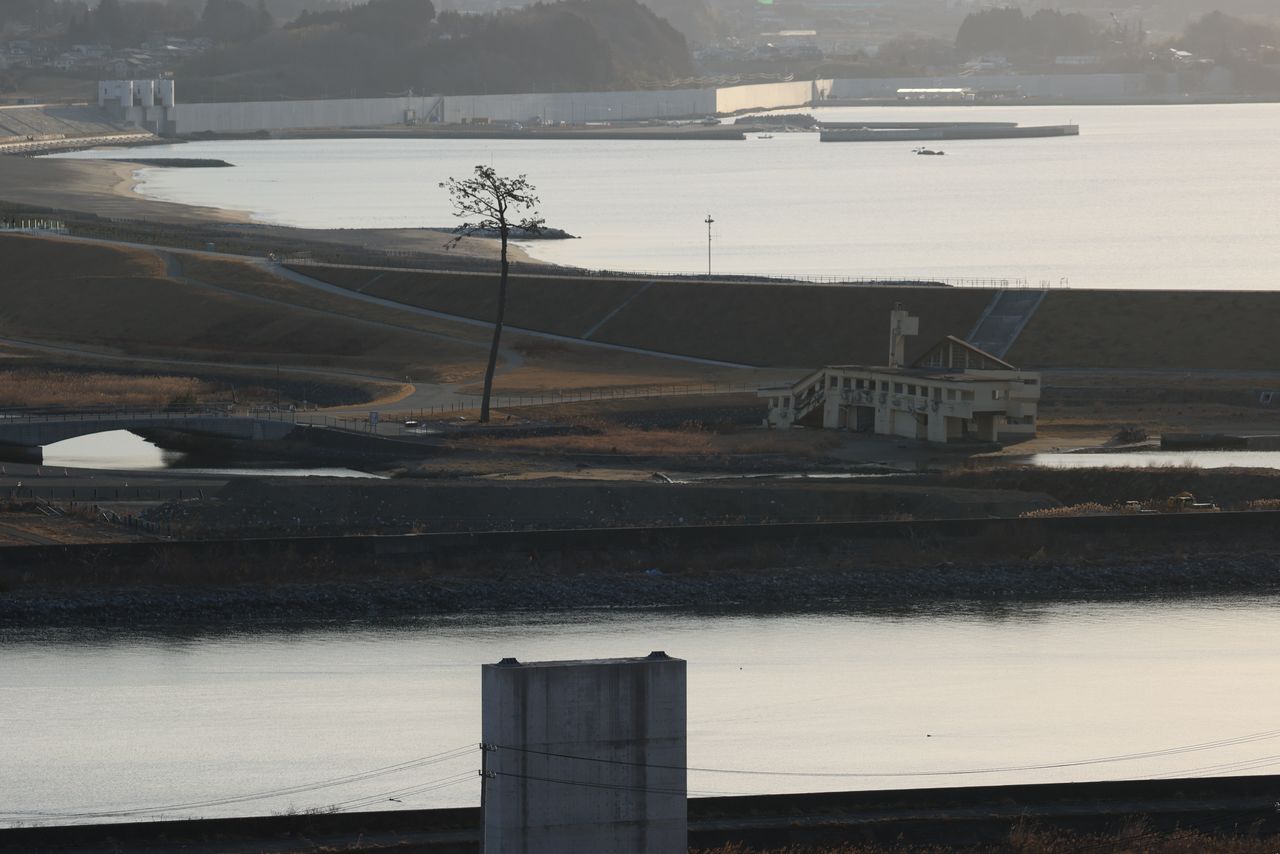 Sapporo District Court rules on March 17 that the failure to recognize same-sex marriage is in violation of Article 14 of the Constitution, which states that “all of the people are equal under the law.” The ruling comes in a case brought by three same-sex couples against the national government.

A ¥106.6 trillion budget for fiscal 2021 is approved in the Diet on March 26. It includes ¥5 trillion set aside for pandemic countermeasures without the need for further Diet approval, and sets a record for the ninth consecutive year. The issuance of government bonds is over ¥40 trillion for the first time in seven years.

Golfer Matsuyama Hideki claims the prestigious green jacket at the Masters Tournament in Augusta, Georgia, on April 11 becoming the first Japanese men’s player to win a major title. On April 30, he is presented with the Prime Minister’s Award in honor of the achievement.

Prime Minister Suga Yoshihide meets with US President Joe Biden at the White House for their first in-person summit on April 16. In a joint statement, the two leaders stress the importance of “peace and stability across the Taiwan Strait” and urge “peaceful resolution of cross-Strait issues” in recognition of increasing pressure by the Chinese military in the region.

Vaccination against COVID-19 of Japan’s 36 million seniors aged 65 and over begins in many municipalities on May 10. Mass vaccination centers open in Tokyo and Osaka on May 24.

On the same day, the business lobby Keidanren announces that Hitachi Chairman Nakanishi Hiroaki will step down as its chairman midtenure to be replaced by Sumitomo Chemical Chairman Tokura Masakazu. Nakanishi leaves the position on June 1, before passing away on June 27.

The Diet approves and enacts an amendment to the Act on Promotion of Global Warming Countermeasures on May 26, setting the target of achieving zero carbon emissions by 2050.

On June 23, the Supreme Court rules in three appeals that regulations in the Civil Code and family registration law not allowing married couples to have separate surnames are constitutional.

On the same day, Kansai Electric Power Company restarts the number 3 reactor at Mihama Nuclear Power Station in Fukui Prefecture. This is the first time that a reactor has operated beyond the “in principle” limit of 40 years, instituted by the government after the 2011 nuclear disaster at Fukushima. It is halted on October 23, however, due to failing to meet a deadline to implement antiterrorism measures.

It emerges on June 30 that Mitsubishi Electric invented data in improper inspections of air conditioning equipment for train carriages, and may have done so for more than 30 years.

On July 3, heavy rain leads to a major landslide in Atami, Shizuoka Prefecture, killing more than 20 people and damaging dozens of buildings. Improper disposal of landfill on a slope is thought to have triggered the disaster.

Hiroshima High Court rules on July 14 that 84 residents of Hiroshima Prefecture should be recognized as hibakusha, having been exposed to radioactive black rain that fell after the 1945 atomic bombing.

On July 23, the Tokyo Olympics begins after a one-year postponement due to the COVID-19 pandemic. It is the second time the city has hosted the games, following the first in 1964. Emperor Naruhito announces the start of the Olympics at an opening ceremony with no members of the general public among the spectators; tennis star Ōsaka Naomi lights the Olympic flame.

Amami Ōshima and other southern Japanese islands are registered as a natural UNESCO World Heritage site on July 26. Jōmon prehistoric sites in northern Japan are added to the list of cultural sites the following day. This brings Japan’s total number of World Heritage Sites to 25, of which 5 are natural heritage sites.

The closing ceremony for the Tokyo Olympics is held without spectators on August 8. Japan finishes with a record total of 58 medals. The 27 golds include 9 in jūdō, 5 in wrestling, and 3 in the new sport of skateboarding.

In Japan’s fifth COVID-19 wave, daily cases reach their peak, topping 20,000 in late August. However, daily fatalities stop short of 100. The number of cases drops dramatically from around mid-September. As of December 28, Japan has a cumulative total of more than 1.7 million cases and more than 18,000 deaths.

The Tokyo Paralympics begins on August 24 and continue to September 5. Japan finishes with its second highest ever total of 51 medals.

The government launches the Digital Agency on September 1, appointing Hirai Takuya, minister for digital transformation, to head it. Makishima Karen takes over the position on October 4.

On September 3, Prime Minister Suga Yoshihide announces that he will not run in the Liberal Democratic Party leadership election. Kishida Fumio is elected as president of the LDP on September 29, formally becoming Japan’s new prime minister on October 4. 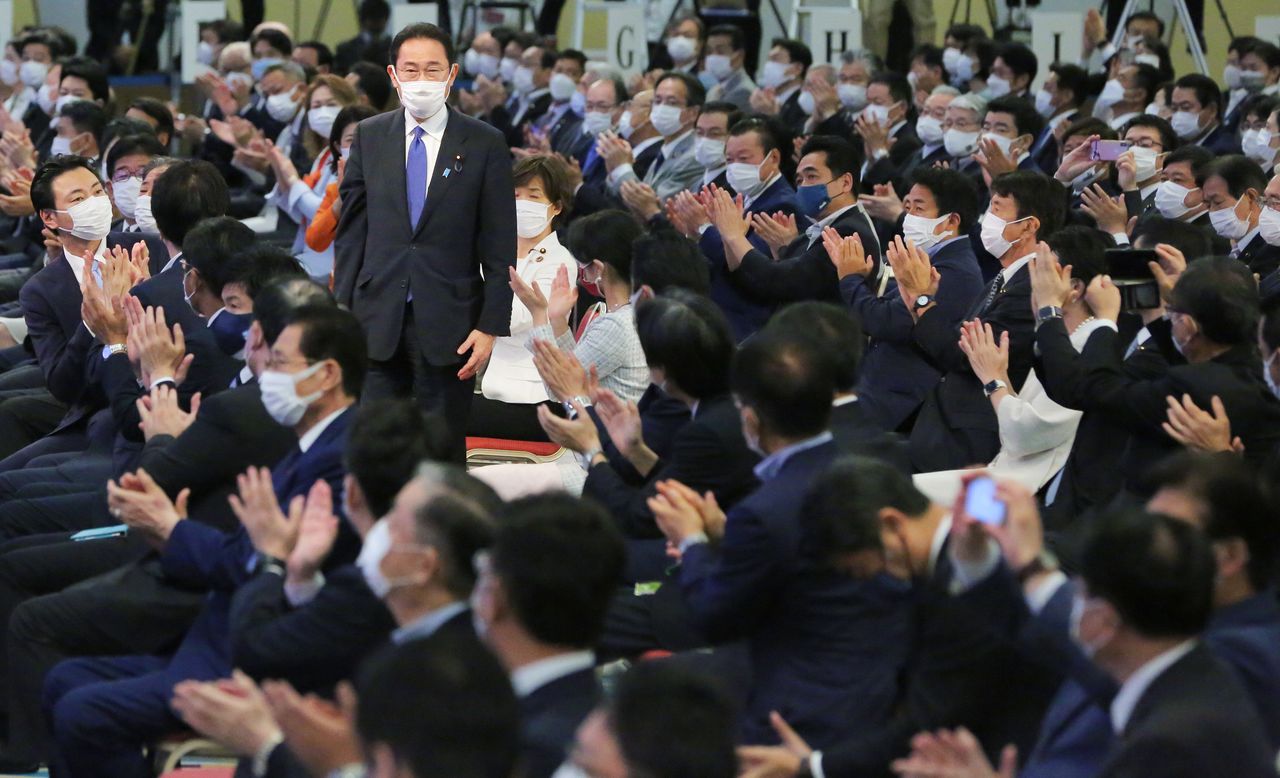 Kishida Fumio (standing left of center) after the announcement of his election as leader of the Liberal Democratic Party in Tokyo on September 29, 2021. (© Jiji)

The Tokyo District Court sentences LDP lawmaker Akimoto Tsukasa to four years in prison on September 7 and fines him ¥7.6 million for taking bribes and tampering with witnesses in connection to a casino resort corruption scandal.

Yokozuna Hakuhō retires from sumō on September 30 with a record 45 championships.

The Japan-born US scientist Syukuro Manabe is among three winners of the Nobel Prize in Physics on October 5 “for the physical modelling of Earth’s climate, quantifying variability and reliably predicting global warming.”

On October 26, Princess Mako marries her former college classmate Komuro Kei. They leave Japan to begin a new life in the United States on November 14.

The Liberal Democratic Party loses 15 seats in the October 31 House of Representatives election, but still finishes with a sole majority of 261 out of the total of 465 seats. Together with Kōmeitō, the coalition has 293 seats. Nippon Ishin no Kai (Ishin, or the Japan Innovation Party) wins a total of 41 seats, becoming the lower house’s third largest party.

On November 18, Ohtani Shōhei of the Los Angeles Angels is chosen unanimously as the winner of the American League MVP. 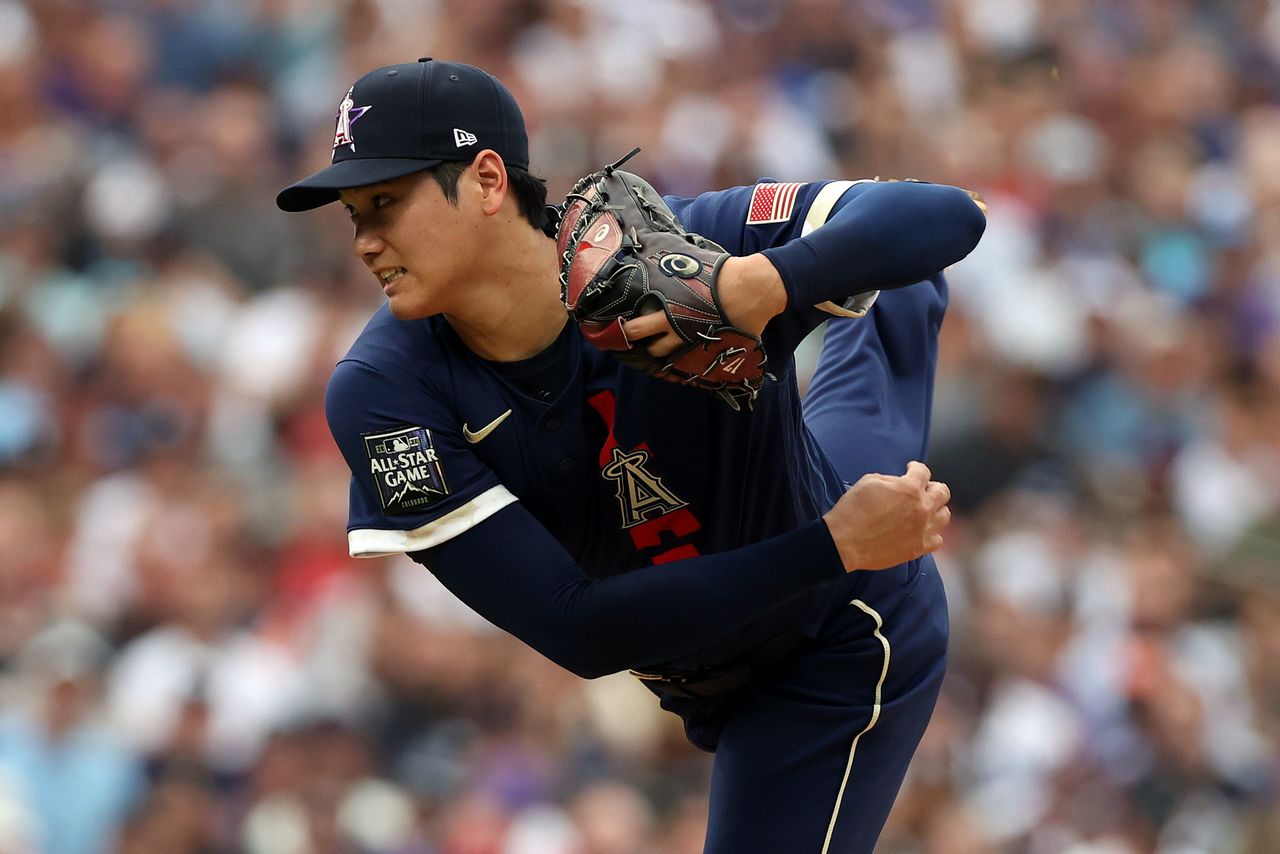 The government decides on November 24 to release some of its oil reserves as part of an international effort to counter a surge in prices. It is the first time for the government to use state reserves.

Following its disappointing performance in the House of Representatives election, the Constitutional Democratic Party of Japan elects Izumi Kenta as its new leader on November 30. 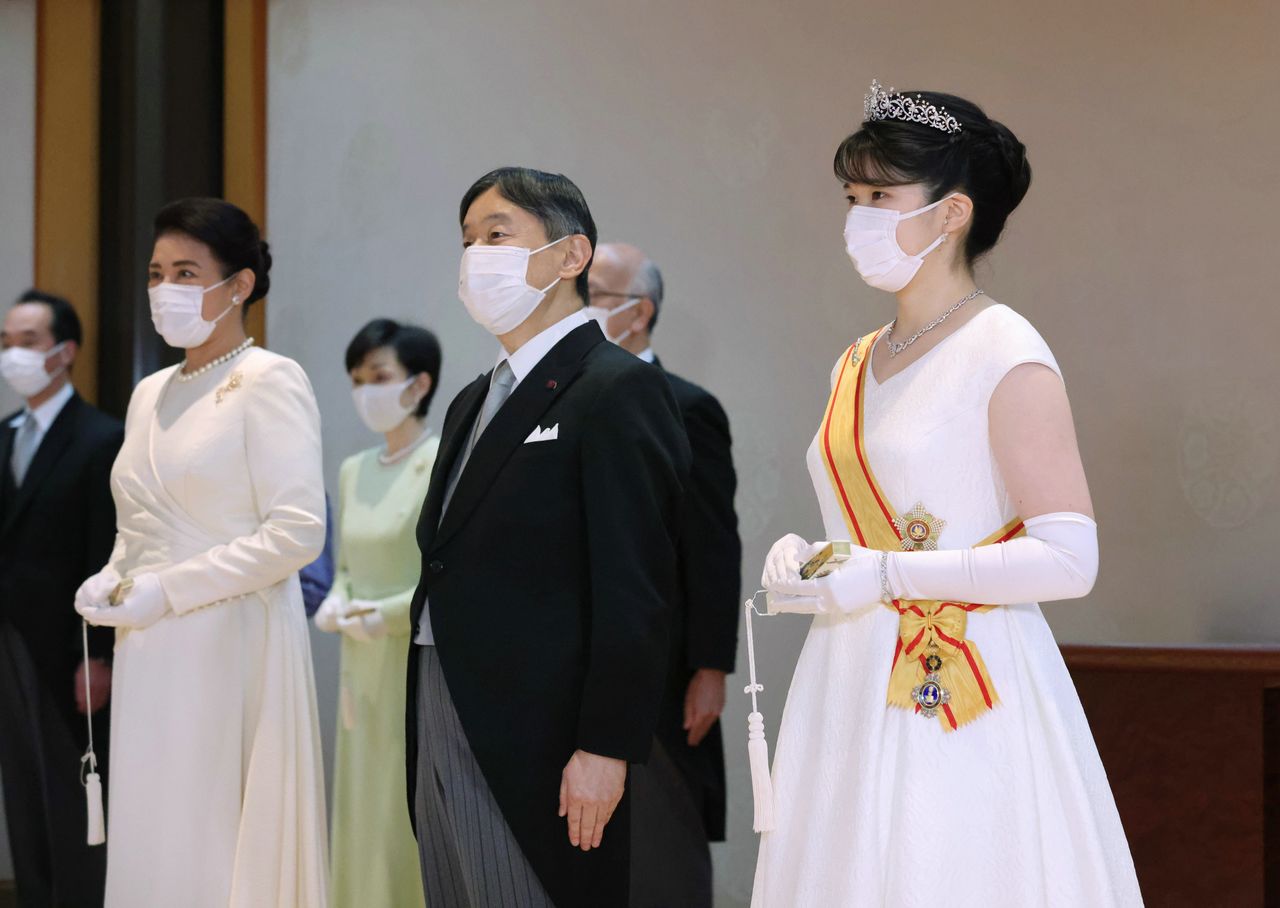 Princess Aiko (right) stands with her parents, Emperor Naruhito and Empress Masako, at a ceremony at the Imperial Palace in Tokyo on December 5, 2021. (© Jiji)

Maezawa Yūsaku, the billionaire founder of Zozo, boards a Russian Soyuz rocket on December 8 to spend 12 days on the International Space Station, becoming the first privately funded Japanese citizen to fly to space.

On December 17, an arson attack at a mental health clinic on the fourth floor of an eight-story building in Osaka’s Kita Ward results in the deaths of 25 people, as of December 28. The suspected perpetrator, Tanimoto Morio, is arrested on December 19 while still in critical condition; he dies in the hospital on December 30.