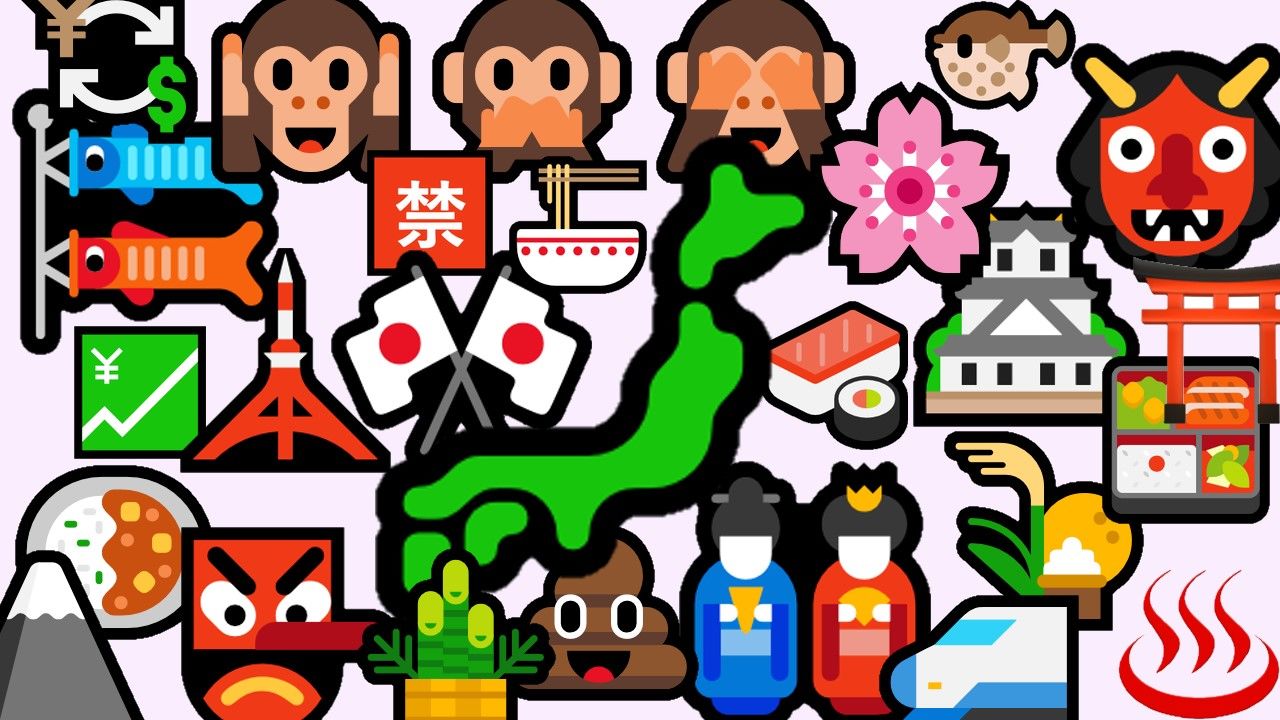 Society Culture Apr 29, 2019
It may be surprising how many emoji there are relating to Japan. This collection gathers dozens together, which can act as an introduction to the country’s culture.

(Please note that depending on the device and OS you’re using to view this article, you may not be able to see all of the emoji in it. We hope you can!)

Emoji have been around for over 20 years, since their initial invention for use on Japanese mobile phones. Now familiar around the globe, they still reveal their roots through the disproportionate number of ideograms connected to Japanese culture. For example, Japan is the only country to have a corresponding map (🗾), and among the handful of landmarks like the Statue of Liberty (🗽) and the Kaaba (🕋), Japan has both Mount Fuji (🗻) and Tokyo Tower (🗼).

There is a full buffet of Japanese food to enjoy, ranging from icons like sushi (🍣) and ramen (🍜) to less well-known items including dango rice dumplings (🍡) and the narutomaki or “fish cake with swirl” (🍥) often served with ramen. The drinks matcha tea (🍵) and sake (🍶) are recognizably Japanese, and there is also dessert in the form of purin custard pudding (🍮) and kakigōri, or shaved ice (🍧).

As of 2019, Unicode—the standard for computer text and symbols—includes around 1,700 emoji, although they are rendered differently depending on the platform. This means that a particular character may appear more Japanese, for example, on iOS than Android. “Pot of food” (🍲) usually looks more or less like nabe, but on Android it resembles a Western stew. Although originally from South Asia, “curry rice” (🍛) generally recalls how the Japanese form of the dish is served—but this again is variable.

Some of the most Japan-specific emoji are related to festivals. There are the kadomatsu or “gateway pines” (🎍) of New Year, Hinamatsuri dolls (🎎), carp streamers (🎏) for Boys’ Day, a Tanabata tree (🎋), and even the full moon and ceremonial decorations (🎑) of the fall festival Tsukimi. Japanese religion is represented by the distinctive red torii or gate of a Shintō shrine (⛩️). There are also the mythological long-nosed tengu (👺) and oni, or ogre (👹).

In some cases, specific emoji exist in both Japanese and Western-style versions. Thus, there are both a Japanese castle (🏯) and a post office (🏣) displaying the 〒 postal mark, and their Western counterparts (🏰)( 🏤). Banknotes can be found in dollars (💵), euros (💶), and pounds (💷), as well as yen (💴). Yet the currency exchange symbol usually shows only dollars and yen (💱). While dollar signs are most likely to appear in money emoji (💰🤑💲), one lingering anomaly favoring Japan is that “chart increasing” comes in yen (💹), but not other currencies.

Miscellaneous characters include the three wise monkeys who see, hear, and speak no evil (🙈 🙉 🙊), taken from a carving at Nikkō’s Tōshōgū Shrine, Japanese gestures for indicating if something is OK (🙆) or not (🙅), and the poop emoji (💩) that startled the world with its cheerful demeanor when emoji first hit the global mainstream. The love hotel (🏩) is a typical establishment in Japan, but unfamiliar users in other countries are known to reinterpret it as a hospital based on the “H” and heart signs it displays.

Incidentally, another emoji often repurposed is the “grinning face with sweat” (😅), which is deployed by Japanese people to express mild apology or embarrassment. Users elsewhere commonly bring it into play when they want to express relief at avoiding a bad situation. Phew! Occasionally puzzlement can bring comically imaginative readings, like the tulip-shaped Japanese kindergarten name badge (📛), which has gained the English nickname “tofu on fire.”

A host more symbols swell the ranks of Japanese emoji, although most are little known or used outside the country. Perhaps most recognizable are the sign for onsen or hot springs (♨️) and the symbol displayed by newly qualified drivers (🔰), which is used by extension in other contexts to mean “beginner.” A range of kanji buttons expressing such ideas as “congratulations” (㊗️), “prohibited” (🈲), or “discount” (🈹) are also available.

Below is a largely comprehensive list of Japanese emoji. Some are unequivocally Japanese, while others may be more universal icons that nonetheless still recall specifically Japanese versions. Some borderline cases are not included, like “dog” (🐕), which has traditionally been displayed as an Akita-inu, but is now another breed on many platforms.